Young Tyler Hansen had just walked into the kitchen to get a drink when a casserole dish in the oven suddenly exploded - sending a piece of glass straight towards him.

The 6-year-old suffered an 8cm-long gash to his right leg.

The wound was so deep he had to be admitted into hospital and was put under as he received 12 stitches.

Now his family is calling on retail giant Kmart - where the glass dish was purchased - to recall the dish to ensure no one else is hurt in a similar way.

Tyler's uncle Ted Hansen, of Manurewa, said he bought the dish and other general items about two weeks ago from the Kmart store in Manukau, South Auckland.

It was only used on Monday, however, when Hansen made honey soy chicken for his whānau; including for his sister and her son, Tyler.

"It wasn't even half an hour when I opened the oven to flip the chicken. At the same time, my nephew was getting a drink.

"As I opened the oven . . . the whole roasting dish just exploded and shattered.

"The corner piece flew out and got him in the leg, on top of the knees and it split open."

Screaming in pain, Tyler was carried to the car as they rushed to get to the closest accident and emergency clinic in Takanini. 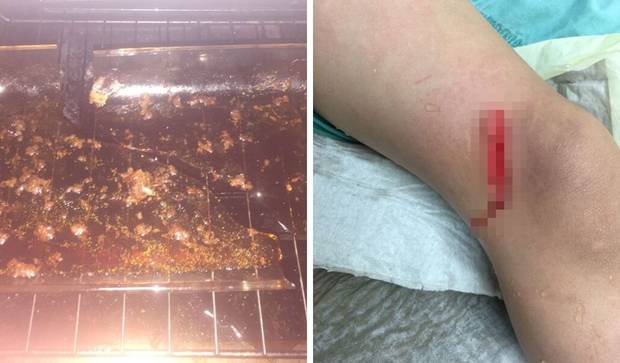 "I just jumped in the car and rushed him to A and E - for them to tell us that it was too deep and too wide that he had to be taken to Middlemore [Hospital]."

The incident happened about 6.30pm. By midnight, they were still at the hospital as Tyler was told he had to stay the night.

Hansen later contacted Kmart Manukau to let them know what had happened and also warn them of the potential danger to other customers who purchased the same casserole dish.

Instead, he claims, he was told to call the head office.

"They told me it's out of their hands because they just sell the product, they don't make it.

"Then I had an argument with them because she said: 'Sorry about your nephew but it's out of our hands now' and hung the phone up on me.''

Hansen said he could not understand the response to his call, given the severity of the incident - and the subsequent injury - involving an item that was being sold on their shelves.

"That's what I thought they were going to do - take it off their shelves and get it recalled. But there's nothing.

"They said: 'Oh, we can't do anything until we hear back from the manufacturing company'.

"But who knows, it could happen to any other person or kid."

He said the oven temperature was on about 150C when it was being used to cook their dinner.

Hansen said even if nothing else was done, they could at least have been given an apology from the company.

A statement issued by Kmart said they wanted Hansen to get back in touch so they could "help clarify some of the specific product details so that we can investigate".

"At Kmart, the safety of our customers is our number one priority, which is why all of our glass baking dishes are made from tempered/toughened glass. A type of safety glass, known for its durability," the spokesperson said.

"These dishes have passed rigorous quality testing to ensure they are heat resistant, fit for purpose and fully compliant with regulations and safety standards."

All customers who had issues with any Kmart products were urged to contact the company's customer service team by phone or via its website.