An emotional Elton John has reached out to fans on social media saying he's "disappointed and deeply upset" that he couldn't complete his show on Sunday night.

The distraught performer was forced to call off his first Auckland concert midway through the performance after suffering pneumonia and losing his voice.

The superstar, who earlier needed medical assistance while on stage, broke down in tears and needed to be assisted from the stage after attempting to launch into Daniel, but having no voice left.

The song was number 16 in a 25-strong playlist at Mt Smart Stadium.

Just after 10.30pm on Sunday, John posted a heartfelt message to his loyal fans.

"I want to thank everyone who attended tonight's gig in Auckland. I was diagnosed with walking pneumonia earlier today, but I was determined to give you the best show humanly possible. I played and sang my heart out, until my voice could sing no more.

"I'm disappointed, deeply upset and sorry. I gave it all I had. Thank-you so much for your extraordinary support and all the love you showed me during tonight's performance. I am eternally grateful."

He signed the message off saying "Love, Elton xx".John's next two Auckland concerts, on Tuesday and Thursday, are now in doubt.

John told the crowd early in the concert he had been diagnosed with 'walking pneumonia' on Sunday morning. His voice was 'shot', he said, but he was determined to lay on a great show. 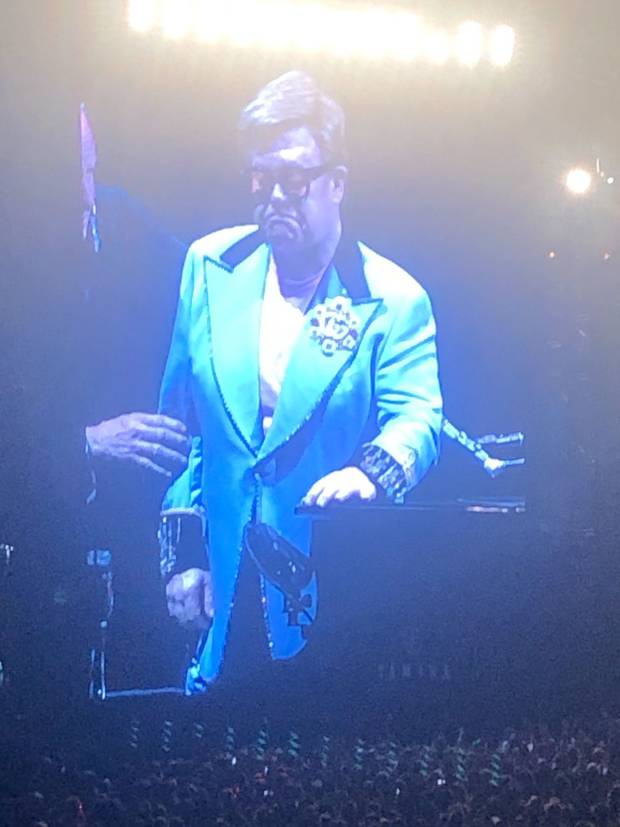 Elton John gets emotional as he has to leave the stage. Photo / Supplied

The concert was paused for almost five minutes straight after John completed Someone Saved My Life Tonight about 8.40pm.

John remained on his piano stool as assistants - and what appeared to be medical staff - tended to him. His blood pressure was being taken as the assistants spoke to him.

There were no announcements and John remained on stage. After several minutes and without speaking, John continued the concert with the song Levon.

The large screens flanking the stage had briefly gone dark but within minutes the concert resumed - to wild cheers from the crowd at Mt Smart Stadium.

He struggled to perform Candle in the Wind and told the audience he did not know how long he could continue as he "had nothing left". He left the stage just after 9pm and the stage, screens and stadium were left in darkness. However he managed to return to the stage about eight minutes later in a new costume.

John had earlier told the crowd he was determined to carry on with his first Auckland show.

"My voice is shot," the superstar told fans tonight.

Sunday's concert was the first of what are meant to be three shows in Auckland.

Walking pneumonia is an infection caused by bacteria that primarily affects an individual's lower and upper respiratory tract.

The condition is not as severe as the other forms of pneumonia and in most cases hospitalisation and bed rest are not required for recovery. It goes unnoticed and feels similar to the common cold for most individuals.

John has resumed his tour of New Zealand after jetting back from Los Angeles to attend the Academy Awards.

On Saturday night he had performed at the Mission Estate Winery in Napier to a packed crowd, with scores of fans arriving early in a bid to get the best vantage point possible.