Two wealthy landowners are in a prolonged and bitter dispute over a shared driveway on their piece of island paradise.

The long-running battle on Waiheke Island came to a head in July when a family member took a chainsaw to a gate erected without his permission at the entrance of his house and used a quad bike to drag it to their neighbour's doorstep.

The act was caught on security camera. 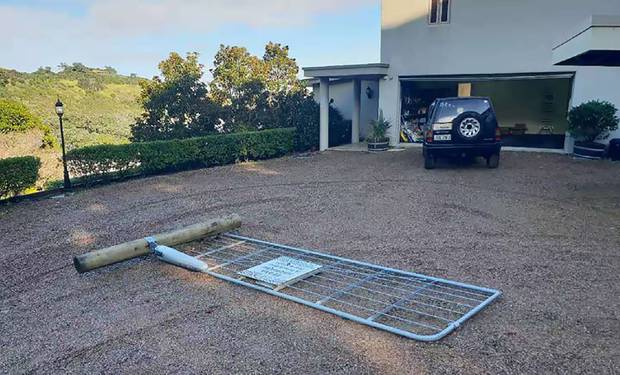 Neighbours are at war over a gate one owner installed without the other's permission. Photo / Gary Thomason

But Andrew Smith said it was in retaliation to the gate, which can be opened manually, being installed outside the entrance of his family's Matiatia property. They had already asked their neighbour Gary Thomason's lawyer to remove it and say civil action is now under way to settle the toxic stand-off.

Thomason, a retired engineer, told the Herald he spent $20,000 installing commercial digital speed signs and erecting the gate, valued at $5700, at the northern boundary of his property earlier this year to stop motorists speeding along the driveway he owns, but to which his neighbour, Smith, has right of way.

Thomason said he decided to do something after catching a visitor to Smith's property travelling at 40km/h.

But Smith said there had never been a problem with speeding and claims that the only reason Thomason erected the gate was to restrict their access, taunt them and do whatever he could to ruin Smith's accommodation business and family.

Thomason had already installed another gate at the start of the driveway in 2017, Smith said. The new gate was at the other end of the driveway past Thomason's house but in front of Smith's property and was in the process of being automated.

"You can't take control of a shared driveway and he's trying to do it with bullying tactics," Smith claimed.

"It's a legal access that we are allowed to drive up and down our driveway."

The sign at the end of the shared driveway before it was sawn off and dumped at the neighbour's doorstep.

Smith believed the "over the top" speed signs and second gate obstructed the right of way and were designed to intimidate his family.

Thomason also put several signs including one that read, "Te Ara Haumaru, A priviledge (sic). Not a right" on the gate.

Smith he had made a report about his neighbour to police.

He also claimed the commercial digital signs were blinding when driving at night.

The gate was just one of a number of things his neighbour had allegedly done which he believed were intended to taunt them. He claimed Thomason had also relocated six geese at the boundary by their house, making it difficult for them to leave and stacked rubbish beside the entrance of their property.

Smith said the whole situation had been extremely stressful.

It was Smith's stepfather who eventually cut the gate post down in July and dropped it at Thomason's doorstep, Smith confirmed.

But Thomason claimed he was well within his rights to install the signs and gate due to safety concerns and to clearly define the boundaries of the properties.

He denied claims he was trying to ruin Smith's accommodation business or taunt them with the rubbish and geese.

"I'm well aware of how to behave ... I have stopped people a couple of times and politely said to them, 'Can you please keep the speed down'. Four out of five say, 'Thanks so much' and 'very good' and one might say, 'Whose business is it' and I say, 'It's the business of everyone to promote road safety'." 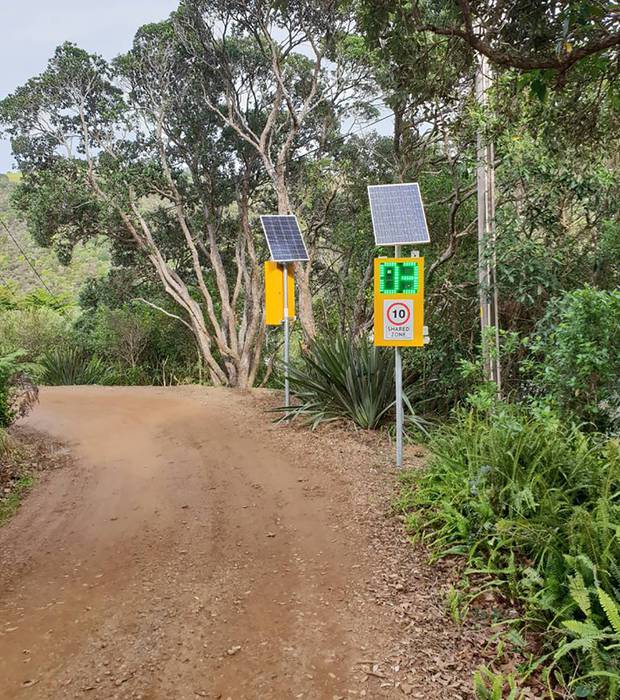 Police had probed the latest incident with the gate after receiving a complaint.

In a statement, police said they had investigated the matter and no charges would be laid.

"This incident is part of an ongoing civil dispute between the complainant and a neighbour over shared driveway access.

"Police have been aware of this issue for some time and have spoken to both parties in attempts to resolve the ongoing dispute.

"We will continue to do so in the hope of reaching a mediated outcome, however ultimately the dispute is a civil matter."

"I'm basically just doing everything perfectly well ... if I can't have protection from the law for cutting down my gate post, then what the hell?"

The case has similarities to a bitter feud in 2015 between former All Black Marc Ellis and his then neighbour jazz singer Briar Ross over their nearby Waiheke driveway.

Ellis called police after Ross organised a digger to tear down a rock wall on the driveway because she believed it was illegal. She was found guilty in 2016 and ordered to pay Ellis more than $1000 in damages.