A former Dilworth School assistant headmaster who sexually abused students over two decades says he's remorseful for his actions, but his lawyer says he was introduced to "degenerate" behaviour at the school.

Ian Robert Wilson was today sentenced to three years and seven months in prison for indecently assaulting five students between 1975 and 1992 - some of them more than once and over a period of several years.

His lawyer Steve Cullen said Wilson was a predator and he accepts that and took responsibility.

Wilson said in a statement addressed to his victims, and read on his behalf by his lawyer: "I take full complete and absolute responsibility for my actions.

"If you can, I hope you can find some way to heal from my actions."

Cullen said Wilson fell under the spell of colleagues at school.

"He was approached by a staff member who introduced him to a mode of behaviour at the school that was degenerate, and he fell under the spell, but that is in no way an excuse and he accepts and acknowledges that."

One of Wilson's victims Neil Harding, who has his automatic right to suppression lifted, was in Auckland District Court today to face Wilson.

Harding was the only victim of five that read his own victim impact statement, turning to address Wilson directly.

He earlier told the Herald he did not care what sentence Wilson was given - his guilty plea last year was vindication enough - but he didn't want to regret not having a chance to give a victim impact statement.

He was accepted into the boarding college after his father had left the family when he was a boy.

"Being only 11, I was vulnerable and seeking the safety and guidance of male role models," he told the courtroom.

"I joined Scouts, you were the scout master, and I felt safe with you. You seemed to be musical and witty. I went away with you and a few other boys for a weekend to Dargaville. I felt special being chosen. Then it all changed."

He was called to Wilson's apartment, which was attached to the boarding house, one evening while the other boys were in bed.

Wilson, who was then in his mid 20s, got a terrified Harding to tickle his tummy, then asked him to move his hand lower as he was groaning and writhing on the floor. Harding asked to leave and ran from the house, too scared to tell anyone what happened.

"I was devastated what you did to me and that there were ulterior motives. I was only taken under your wing so you could take advantage of me. The protection that was offered was false, in fact, you were a threat to my safety.

"I did what Dilworth had trained me to do, I stayed quiet and told no-one. I copped it and shut up. You also said nothing, and life proceeded as it had. It is a frightening space for a child to live in, having to be constantly alert and wary of all grown-ups." 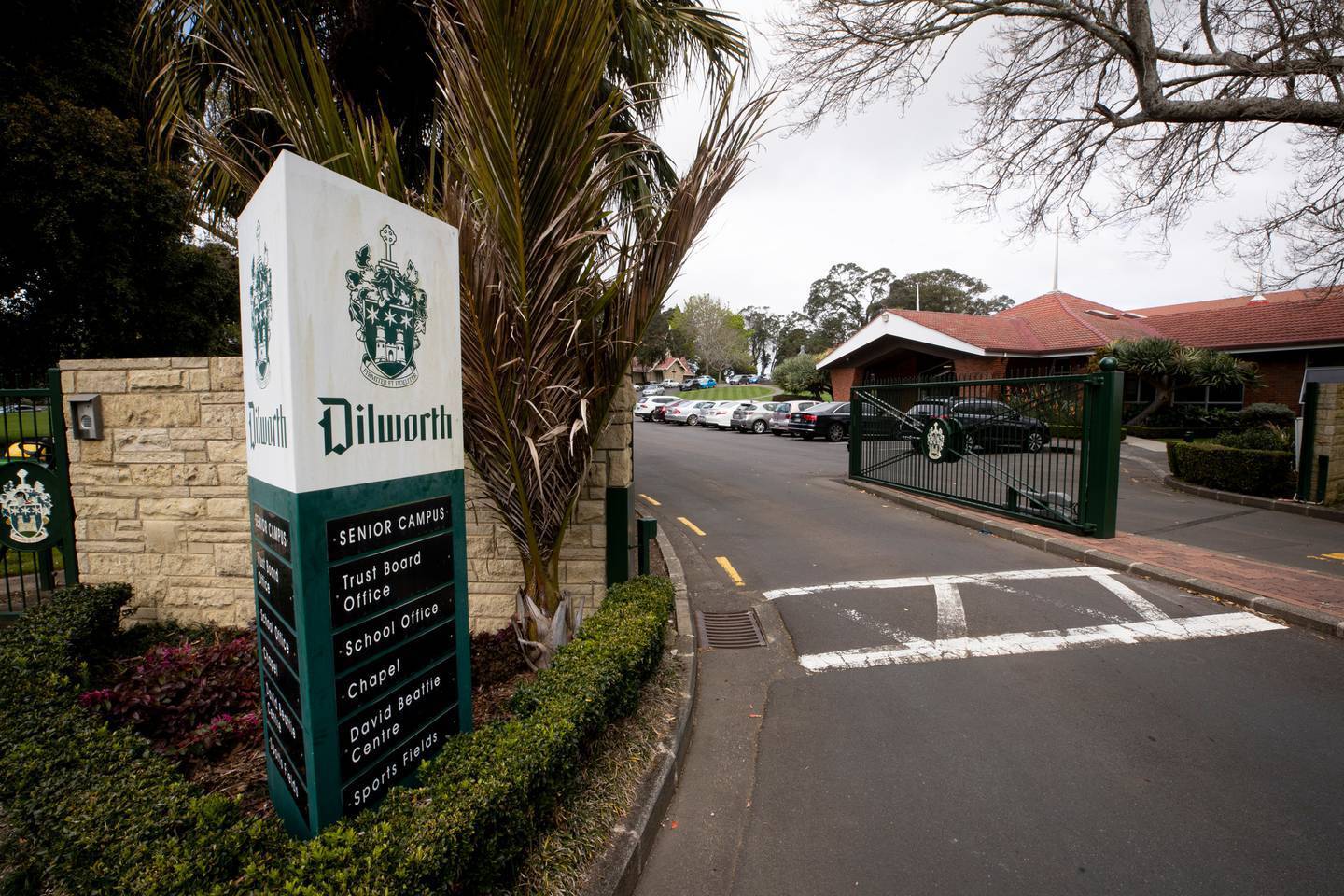 Seven men have been charged in relation to Operation Beverly - an investigation into allegations of historical sexual offending at Auckland's Dilworth School. Photo / Dean Purcell

Another victim was abused two to three times a week over a period of four years in Wilson's school office. His victim impact statement was read by Crown lawyer Jacob Barry.

He was told he was a "stupid boy and a liar" when he told a priest of the offending.

"Wilson threatened to kill himself if I told anyone and my life would become unbearable."

Another victim whose impact statement was read by the Crown, described how Wilson's offending led to issues with drinking, suicidal thoughts and lack of trust with others.

Wilson had sucked on the then 12-year-old victim's earlobe and called it a "lovebite" during a group counselling session at a school camp in 1990. The victim's mother had died from cancer earlier the same year.

"The cavalier action that was so easy for Wilson indicated it was ongoing and involved others, that also stayed silent," he said.

Barry outlined how Wilson's "grand scale" of abuse places it at the "top end" of historical child sex offending.

"This school was intended to provide a sanctuary away from what were often difficult times at home for these children," he said.

"It was a perfect storm for Wilson to take advantage of and offend against these children."

Barry said a significant breach of trust took place and the impact on these victims has been profound. Cullen told Judge Collins Wilson was abused himself as a child, and Wilson has prostate cancer. He is the sole carer of his wife who suffers from dementia.

Judge Collins told the courtroom: "I have no doubt as an intelligent man you knew exactly what you were doing was wrong."

"By your [guilty] plea you have importantly said to [your victims]: 'Yes you are telling the truth'."

Wilson was one of seven men charged in September in relation to Operation Beverly - an investigation into allegations of historical sexual offending at the Auckland boarding school.

A further two men were charged earlier this year and police say they have been contacted by more than 100 former students with allegations of abuse during their time at the school.

The allegations related to offending in the mid 1970s through to early 2000s.

Dilworth Trust Board chair Aaron Snodgrass has previously said the school has worked actively working with police and encouraged former students who were abused to lay complaints.

"We take any allegations of inappropriate or illegal behaviour extremely seriously and see abuse of any form as a breach of trust for which the consequences are profound. We have been determined to confront honestly and openly what has happened and make sure that we do everything in our power moving forward to create and maintain an environment where our young men are safe and where they flourish.

"The board deeply regrets and apologises that some of our Old Boys have suffered abuse while in our care.

"Our focus continues to be the wellbeing of our current students while supporting our Old Boys and our wider Dilworth community."

Editor's note
It has been a shock for New Zealanders to learn that several former staff at Auckland's Dilworth School have been charged with sex and drug offences against boys over more than three decades. We want you, our readers, to know that the Herald will follow this story wherever it leads. We have a team of journalists prepared to investigate and we want to hear from you. If you have any information please contact us at [email protected]
Murray Kirkness, NZ Herald Editor

Where to get help:
• If it's an emergency and you feel that you or someone else is at risk, call 111.
• If you've ever experienced sexual assault or abuse and need to talk to someone call the confidential crisis helpline Safe to Talk on: 0800 044 334 or text 4334. (available 24/7)
• Male Survivors Aotearoa offers a range of confidential support at centres across New Zealand - find your closest one here.
• Mosaic - Tiaki Tangata: 0800 94 22 94 (available 11am - 8pm)
• Alternatively contact your local police station
• If you have been abused, remember it's not your fault.