A homeowner has been paid almost $1 million after successfully suing a council, developer, and others who built and signed off a house that later became leaky.

Concerns about one of the defects that caused widespread water damage were raised by one tradie during construction of the house but he was told to "Just carry on" and to "Get it done so we can get on to the next job".

A leak was first identified in the balcony of Bryce Johns' Hamilton home in 2014, prompting an almost $22,000 repair bill.

Two years later mould began to appear inside the home which was eventually found to have extensive water damage.

This week, as the parties squabble over who pays what share of the compensation, Johns told Open Justice it was unbelievable homes were still leaking.

"It beggars belief that a house built in 2008, well after the leaky home crisis came to light, can be this faulty". 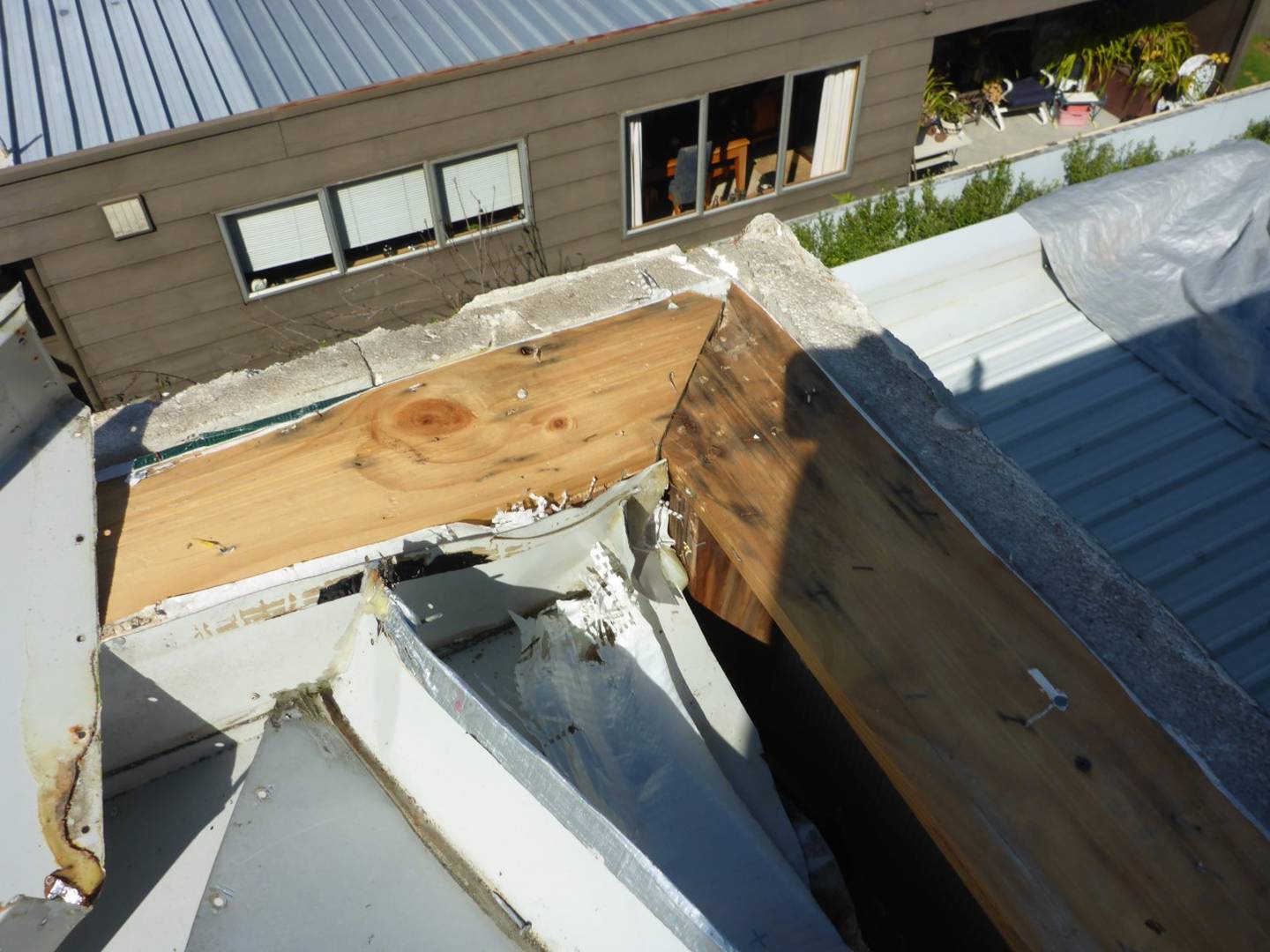 A photograph of the leaky house shows timber staining to the roof parapet from water ingress, after the roof was removed. Photo / Supplied

As former editor of the Waikato Times and the Herald on Sunday, the 54-year-old said his reporters covered the leaky home crisis in detail and it was easy to have sympathy for the victims.

"But it's not until you are personally involved and losing time and money over something like eight years that you realise how bad it must have been for them, particularly those without the resources to fight."

Johns bought the two-storey townhouse in Hamilton in August 2009 and lived in it for 18 months, according to a High Court judgment from Justice Melanie Harland.

He tenanted the property when he moved to Auckland in 2011 and later to Australia for work. In 2014 he decided to sell the property.

An inspection by a prospective buyer uncovered a problem with the deck and leaks were found.

Johns took the house off the market and hired Bell Builders to fix the deck, but the builder did not apply for building consent to do the work or tell Johns it was required.

In 2016 Johns noticed what he thought was mould on the wall in the lounge while looking at photos of the house.

He applied to the Weathertight Homes Resolution Service for an assessment that found water inside the walls, and it was recommended the house be partially reclad, concentrating on the area around the deck.

In mid-2018 Johns hired a building company to undertake the repair at an estimated cost of $187,700. 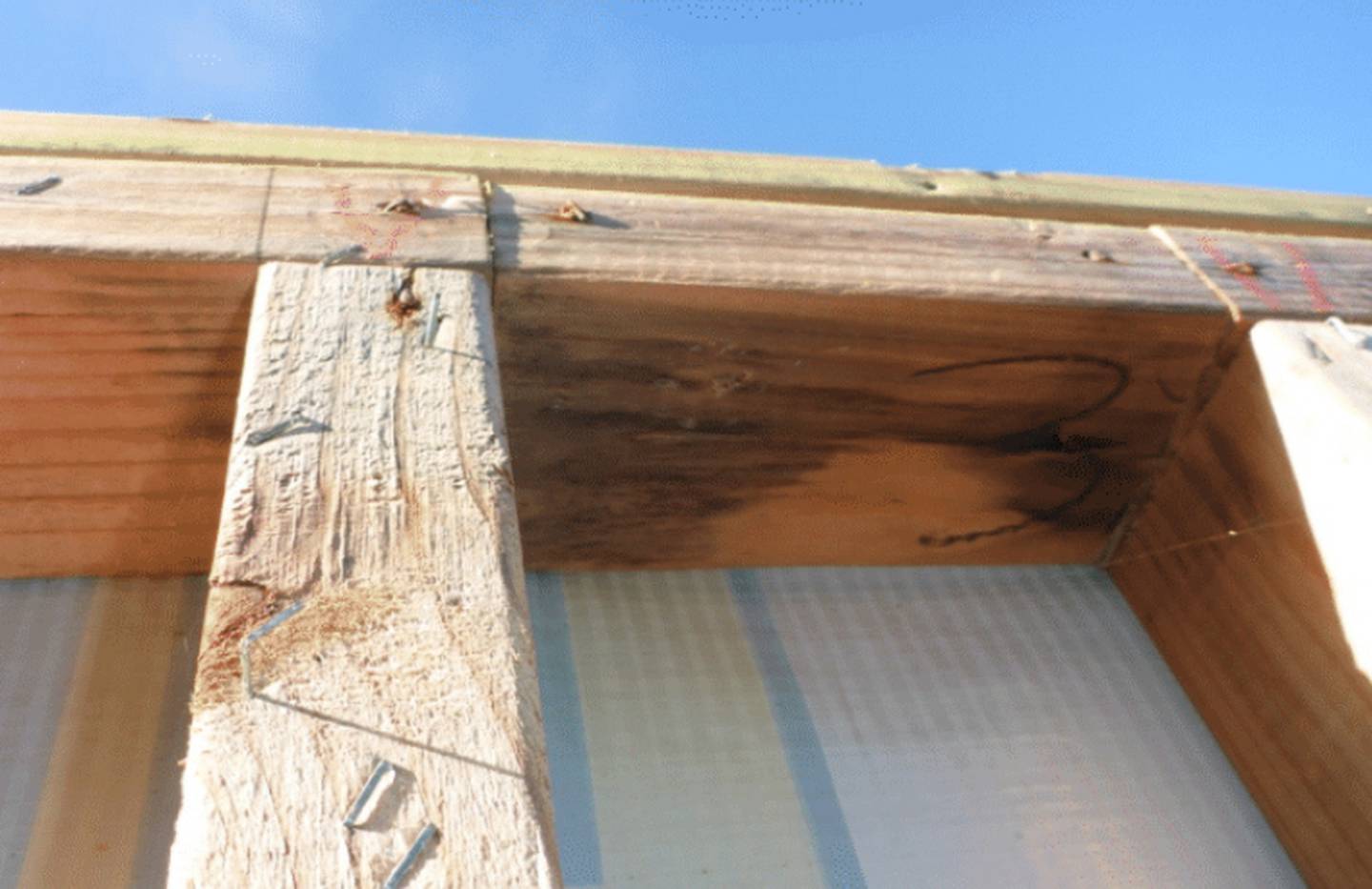 Water damage can be seen to the timber of a roof parapet at a leaky house in Hamilton that had to be completely reclad. Photo / Supplied

But when the remedial work began in August 2018 further defects were discovered and a full reclad was undertaken.

At the same time Johns hired a surveyor with leaky building expertise to assess the damage, which was done over eight site visits between December 2016 and October 2018.

The assessor, Andrew Gray of GBC Group, gave evidence at a hearing in the High Court at Hamilton in May last year.

The claim against developer Garth Davey was that he breached a duty to meet the building code and that as project manager he was responsible for the entire build and was relied on to construct a weathertight dwelling.

Water was claimed to have entered the house through the roof parapet flashings and rivets, the deck membrane and balustrade fixings, around the windows, and through a lack of ventilation and drainage at the top and bottom of the building.

In her decision released in March, Justice Harland addressed each of the seven defects and in some cases found the consented plans did not specify how the materials were to be built, and the building inspectors did not properly check the construction. 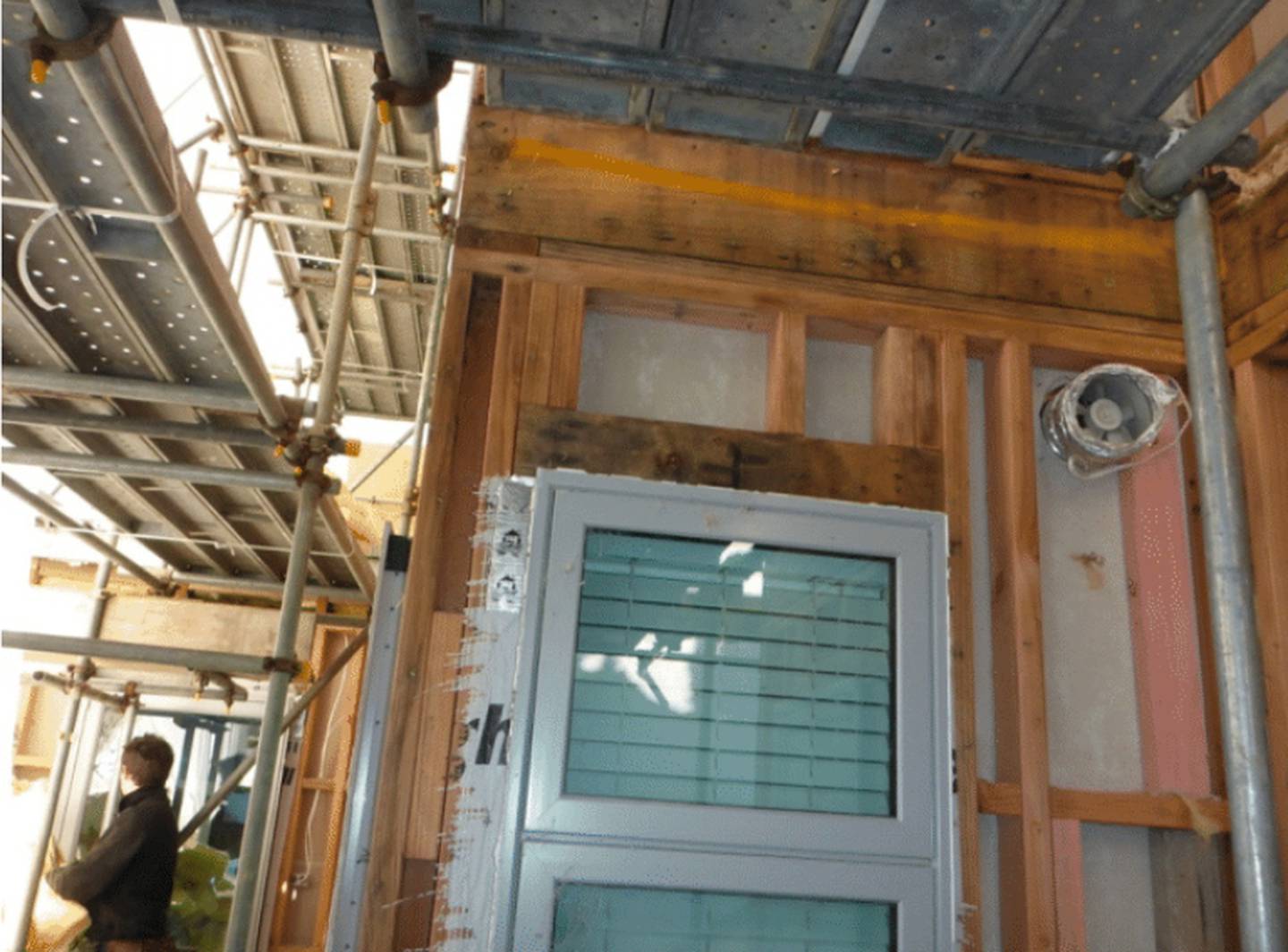 Water ingress was found to be a problem where the cladding and joinery met because of poor sealing. Photo / Supplied

In the case of saddle flashing junctions, where thin pieces of metal are attached to the roof or deck where it joins a wall, construction was not straightforward because the flashings joined two different building products and information provided by the council did not specify how to form a saddle flashing where the two products converged.

Gray deconstructed four saddle flashings during his investigation and found all had problems including one that was in the wrong place.

Next Level Roofing owner Ross Cameron testified he was critical of the workmanship and said it was not done by his roofers.

"When we returned [to site] the saddle-flashings were in," Cameron said under cross-examination.

"Someone's tried to put them in and they don't know what they're doing."

Cameron said he raised it with both the lead roofer, Westgate Roofing, and the onsite builder.

"I'm not sure who it was but I think it was an older guy and he sort of scoffed and said: 'Just carry on with it mate. We're not going to rip the plaster out and repaint it'... and Westgate said the same: 'Just do what they say mate and get it done so we can get on to the next job'."

Both Gray and the council's expert witness agreed this defect caused water damage to the timber framing which Gray said was widespread.

Harland said it was likely it was Davey who told Cameron to "Get it done" and the fact Westgate Roofing did too was "unsatisfactory".

She found Davey primarily liable for the defect but said the council was also liable because it failed to ensure the consent was specific enough and failed to identify the problem at two inspections in 2008.

But Davey told Open Justice he never gave that instruction.

"I would never say anything like that." He did not want to comment further on the case. 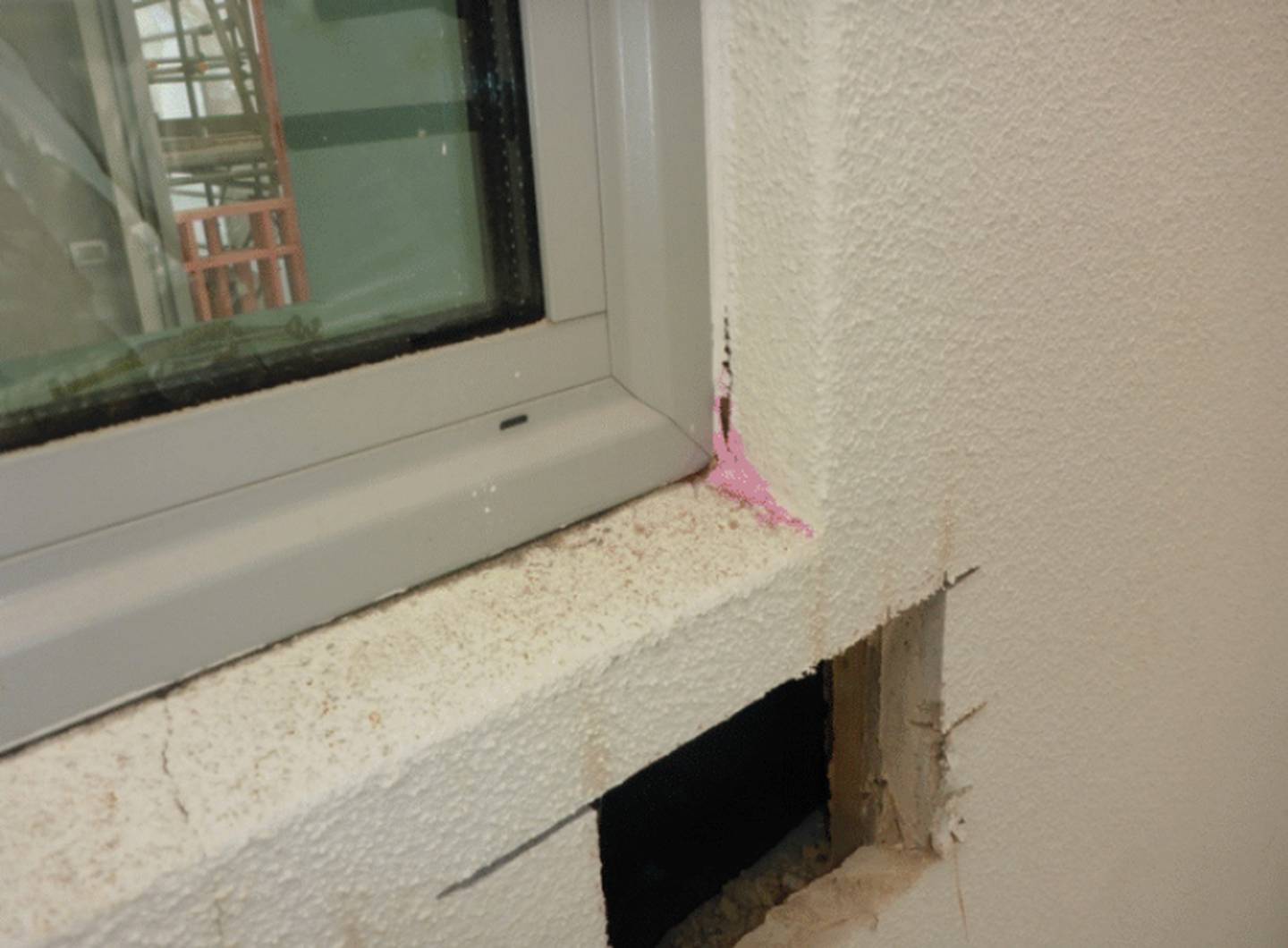 A dye test on the Hamilton home showed water had seeped inside from defects created during the construction of the 2008 townhouse. Photo / Supplied

Johns was awarded $688,419 plus interest and costs, and $25,000 for stress, split across the developer Garth Davey, Hamilton City Council, and several trades that helped build the house in 2008.

Harland ordered Davey to pay 40 per cent of the total amount, the council 25 per cent, Next Level Roofing 20 per cent, builders Daniel Gujer and Hamish Stewart of Elite Coastal Developments Ltd [ECDL] 10 per cent, and Concept Plastering 5 per cent.

The council made a claim against ECDL, Gujer, Stewart, Concept Plastering and its owner Gary Richardson, Next Level Roofing, Cameron, and Bell Builders. Its claim against Simon Bell, architectural designer James Parrott and Westgate was discontinued.

It's understood the council has appealed against the cost split ordered by Harland, but not the decision itself.

Johns said Hamilton ratepayers should be asking questions of the council about the way it has handled the claim.

"While those found to be at fault argue over who pays what, council has borne most of the cost. It had chances to settle this claim twice before going to court, at roughly half what it has ended up paying.

"Who makes these decisions, council officers or councillors? We should all hope they are not blindly following legal advice to back losing cases."

A Hamilton City Council spokeswoman said it was unable to comment because there were further steps underway in the legal process.