Destiny Church in Auckland is holding a service this morning for the first time since the lockdown - and pastor Bishop Brian Tamaki says it's an act of "civil disobedience".

The church's pastor, Bishop Brian Tamaki, is delivering his sermon, saying one of the most dangerous pieces of legislation in New Zealand's history had been passed this week.

He said he was moving into "civil disobedience" and the church had been oppressed by only allowing 10 people to gather.

Destiny had obeyed all Ministry of Health requirements until now, he said.

He claimed the level 2 rules showed the church was an obstacle to the current Government.

Despite his message, the church says no laws are going to be broken.

Destiny spokeswoman Anne Williamson earlier said the only people allowed inside the church today were necessary for the service and in groups of 10 or fewer. They included a video team, a small audience in the front row of the main auditorium, and a group responsible for contact tracing.

Williamson said everyone inside the building had been tested for Covid-19.

Today was about taking a stand and showing the churches of New Zealand could be trusted, she said.

Headquarters Bar owner Leo Molloy is one of those to arrive. Tamaki was one of a number of guests who attended a level 2 gathering at Molloy's bar on Friday night.

Since the lockdown began in level 4, Tamaki's messages have been livestreamed from his home.

But today's service - titled "We Stand for the Freedoms & Rights of All New Zealanders" - is going ahead at the church's main branch on Druces Rd in Manukau, south Auckland.

The remainder of Tamaki's flock are attending a drive-in service, watching the proceedings on big screens set up in the carpark.

Williamson said people were asked to keep their car windows up and were not allowed to get out of their cars. Marshalls were patrolling the car park to make sure people complied.

More than 100 cars have filled the car park, and others are spilling out onto Druces Rd. They're being encouraged to honk their horns during the singing. 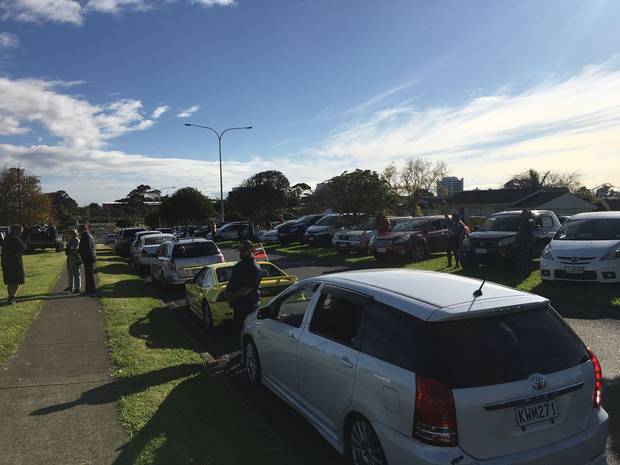 While those in the car park are remaining in their cars, people parked on Druces Rd are out of their cars dancing and singing. They don't appear to be mingling with people from other cars.

A church spokesman said a number of people from other branches had turned up to Druces Rd.

Last week, Prime Minister Jacinda Ardern said religious services would be capped at 10 people under level 2, down from the 100-person limit that was allowed in level 2 before the lockdown.

Many churchgoers and leaders, including Tamaki, have expressed their frustration at the limit to church services, saying they could easily arrange for social distancing.

Tamaki publicly said last a week a service would go ahead in defiance of the rules. He says the Government's decision is discriminatory and unjust.

Tamaki spoke with the Deputy Police Commissioner and a local MP before the service, according to a video posted on Destiny's web page on Wednesday.

Ardern, who was raised Mormon, has said while she understood the importance of worship, churches were community spaces where people would inevitably mix with others.

Up to 50 people are now allowed at funerals and tangi, after an initial 10-person limit was widely decried as unfair.

"We know we haven't seen each other for a long while some of us. Your natural instinct is you want to run and give them a really big hug. If they're not from your bubble you'll have to hold off.

"Make sure there's no hugging, no touching ... please don't let us catch you breaking the rules because it ruins it for the rest of us."

Security services would be stopping everyone on entering the property and everyone was reminded to stay in their car even during the singing. But they were encouraged to contribute by drumming on their cars and using their horns when appropriate.

Older people and people with underlying health issues were encouraged to stay home.

The congregation was also asked to pray for Tamaki, as much of New Zealand would likely be getting "nosy" about what he was doing today and tuning in.

On March 22, before the lockdown, New Zealand was in alert level 2 which banned gatherings over 100 people, but Tamaki's church service still went ahead with safety measures in place".

He had previously said he would not let a "filthy virus scare us out of having church".

"To equate fear with common sense is nonsense. In a time when people are fearful, they need faith, hope, and the presence of God, so we will be keeping our churches open."