The owner of a Waikato-based towing company said the task of shifting 450 vehicles from around Parliament would be "like trying to sell property on the moon".

Police said this morning they had "significantly increased tow capacity", as protesters pass 10 days of their occupation of Parliament grounds.

Paeroa Towing Services owner Michael Small had provided some information to the protesters about how they could "slow down the system" of towing vehicles, such as if a person was inside the vehicle at the time.

Small told the Herald he is one of "probably 50" towing companies that would not take part in the task of removing the illegally parked vehicles.

"I'm for law-abiding, non-violent, civil disobedience in this case," he said.

Yesterday another tow truck operator also told RNZ many companies would not tow the vehicles at Parliament because they sympathised with protesters.

But while he supports the protesters, Small also said removing all the vehicles would be an impossible task.

"I could bring 10 trailers and do twenty cars at a time – that's still over a week to remove. Plus, all the people walking around the vehicles are going to slow you down."

Then there was the difficulty of where to store towed vehicles, he said.

"They've got to safely store the vehicles in a safe environment. Then as soon as the vehicle is taken by the tow truck, it's the towies' responsibility for any damage in storage or loss of goods."

He said there were specific requirements about where a towed vehicle could be kept – it had to be secure, but also accessible to the owner.

"There's nowhere in Wellington where you can put those vehicles and people can go and get stuff out of them when they need to, because someone has to man the place where the vehicles are," he said.

"Where can you put 450 cars, where you can allow the customers to come? Because they're legally allowed to get their stuff out of their vehicles, so there has to be a point of entry and a point of exit. 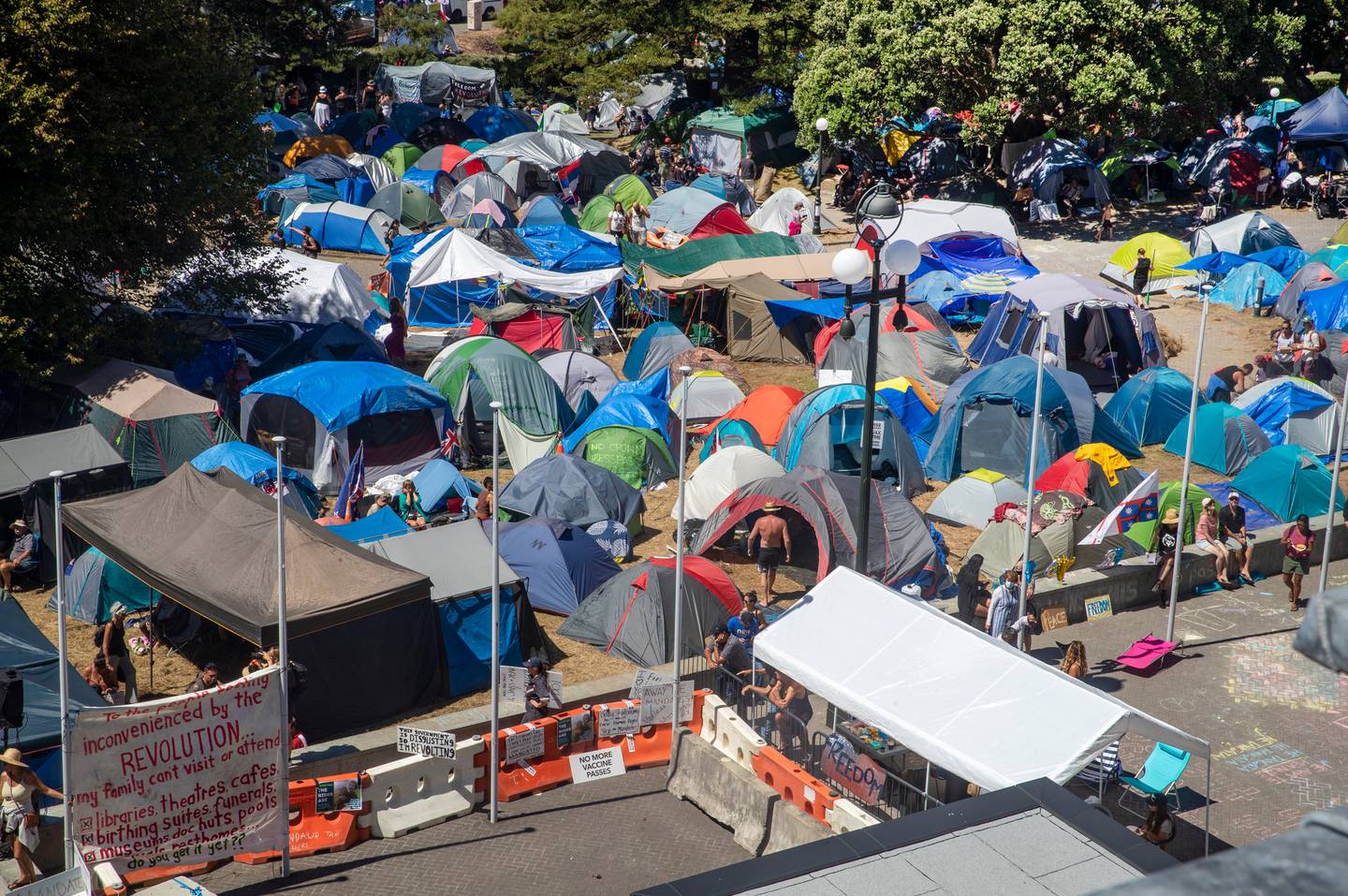 The protesters' village viewed from Parliament House's third floor on day 10 of the anti-mandate protest and occupation at Parliament. Photo / Mark Mitchell

While police signalled on Tuesday evening, they would begin towing illegally parked vehicles, this was still yet to begin on Thursday afternoon.

They warned the clogged streets created safety concerns, such as last night when a female protester suffered a medical event.

"The woman was taken to hospital but once again the ambulance was unable to drive directly to her because of the protesters' vehicles blocking surrounding roads," police said.

Retail shops and cafes around the Wellington CBD also had concerns about the gridlock hurting their businesses.

Wellington Chamber of Commerce chief executive Simon Arcus said earlier today the protest was deterring people from coming into the city and into offices where they would shop, with businesses as far up as Cuba St closing their doors early.