Motorists are experiencing hours-long delays trying to get in and out of Auckland's strict lockdown as animal owners have taken to exercising them on the road.

While a Northland man said he got through the northern border in about 20 minutes, most other motorists are experiencing delays of more than three hours.

One man heading from Hamilton to Auckland has been stuck in the northern checkpoint more nearly four hours and is currently only at Meremere.

The police checkpoints have been up and running within minutes of the new alert level activation announced by Prime Minister Jacinda Ardern last night after news of a new community case.

The new case is a 21-year-old man linked to the Papatoetoe outbreak. 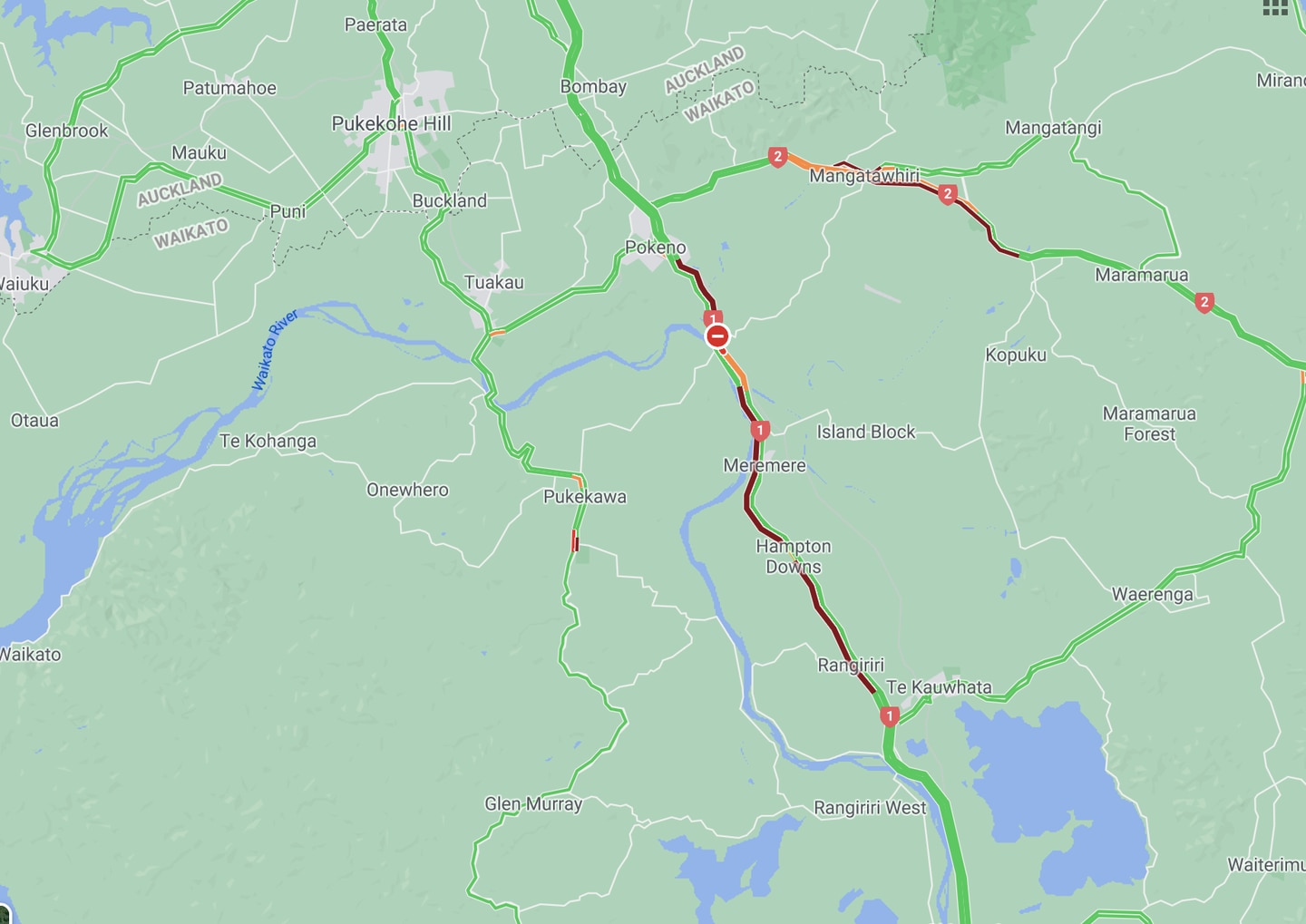 Not only have there been delays but motorists have spoken of inconsistencies by police in their handling of the checkpoints, with some whistling through, while others being threatened with not being able to go home.

Police this afternoon told motorists to be patient and to be prepared for "significant delays".

"Police ask motorists waiting at checkpoints in and out of the Auckland region to remain patient.

"Those who are stopped will be asked about their reason for travel, and to provide proof of an exemption.

"Police would like to thank motorists for their cooperation."

A further police update is expected at 6pm.

Motorist Sam Arthur left Hamilton at midday and at 4.45pm was still trapped in traffic, about 1km from the Meremere turn-off.

Another Auckland man was also stuck in traffic heading north.

He had seen police escort several vehicles travelling with animals, no doubt worried about their welfare.

Auckland woman, Tayla, is heading north after Hamilton's Six60 concert with friends and had witnessed worried owners of animals exercising them along the roadside.

"There has been a bunch of cattle and stock trucks stuck in this hectic queue ... I wouldn't be surprised if some have unfortunately died in this heat.

"Horse owners are having to calm, cool their horses by walking up and down the motorway. Horses are totally distressed and are without food and water."

A woman takes her horses for a walk in the heat of the Waikato sun as they wait hours to get through the southern police checkpoint back into Auckland. Photo / Supplied

She said they also watched people go up to a stock truck and give the trapped sheep water out of their water bottles, as the truck driver also tried to help them.

It had been heartbreaking to hear them and horses stomping in distress in their horse floats hour after hour of delays.

Tayla said they eventually got through after a near four-hour wait and brief questioning from police, asking where in Auckland they were going, and then to be ushered straight through.

Luke Kirkness described his experience heading back to Tauranga as "bloody horrible".

"It took me two hours and two minutes to get through it."

Even more frustrating was being allowed to drive straight through after being asked by the officer where he was going and why.

It surprised him as he watched a motorist in front of him have to provide proof, only for him to be given the all-clear.

Making him feel slightly better about his wait was seeing the even longer queue of traffic trying to get back into Auckland on SH1 Hamilton, which seemed to stretch on for miles south of Hampton Downs.

One Hamilton woman was shocked at being asked to provide proof that she lived in the Waikato while heading home after a weekend in Waiheke.

She said the officer threatened not to let her through as all she had for proof was a driver's licence. She asked the female cop to scan their vehicle registration to prove residence but her device was flat.

She and her husband were eventually let through.

However, her experience seemed to differ from one Northland man.

The man, who didn't want to be named, said he couldn't believe he was able to leave Auckland so easily, after an estimated 12-second conversation with an officer. Traffic on State Highway 1 at Pokeno, just after the SH2 turnoff, was crawling at a snail's pace just before midday today. Photo / Luke Kirkness

"I'm at a tipping point of frustration," the man, who admitted to not being a fan of Prime Minister Jacinda Ardern.

"It just seems ridiculous. I'm cruising back up north and have been through two of these roadblocks now and the first one they wanted a lot of proof and today they asked me, 'where are you going?' and I said 'I'm going home', which is true, and he just waved me on."

The man questioned the officer to see if he wanted to prove that he did live in Northland but the officer said that he believed him.

"I was like 'what's the point in this if you're just going to take people's word?'."

He asked another officer who said they were simply following orders.

"The other way was insane. The roadblock is right on that Wellsford/Northland border which is just out of Te Hana.

"And, honestly, I kid you not there was a line of traffic that went from there that almost went back to Kaiwaka and it was not moving. I'm scratching my head thinking why is it harder to get back into Auckland, I would have thought it would be harder to leave."

A concerned parent has also contacted the Herald stating her daughter had been stuck in the Mercer checkpoint for nearly three hours.

"My daughter has been stuck for three hours in the traffic coming to Auckland, after a trip to Taupo. She has gone 2km in two and a half hours.

"She has no food or water, and her phone is about to die. She reckons she'll be home at midnight if things don't start to move more quickly.

Another woman heading north back into Auckland, said they been stuck in traffic for three and a half hours, travelling just 2.5km.

"No one is going anywhere fast." She had also spotted a woman exercising her horses.

Another motorist, who didn't want to be named, came home from Auckland via Mangatawhiri.

"The line took about 40 minutes and I was waved through the checkpoint, no questions asked."

One cunning Aucklander has opted to avoid the congestion altogether and taken an alternative route to get home from Hamilton.

The motorist, heading home from Taupo, took the turn-off at Huntly through to Pukekawa.

There he had a "90-second wait" to get through the police checkpoint before continuing on his way.