New Zealand's first mass vaccination event is under way in Manukau where 16,000 people are due to receive a Covid-19 vaccine in the next three days.

But it's just hours in and problems already appear to be emerging over lengthy wait times.

South Aucklanders are set to receive their first vaccination shot over the weekend, with the event at the Vodafone Event Centre starting this morning.

Talkback caller Ralph who turned up 10 minutes before his 10am appointment told Newstalk ZB he was still waiting more than an hour later.

He had since given up and left, unable to take off work the anticipated two to three hours he now faced for getting a jab. "What's happened is it's slowed down like a train than coming off the rails," said Ralph.

He said large numbers of people were milling around and he suspected it was going to get worse.

Northern Region Health Co-ordination Centre vaccination programme director Matt Hannant said "a number of people" had arrived early at MIT which led to a queue for those registering before being transported by bus to the vaccination site.

He said more registration staff had been brought in to deal with the demand.

"While we are very pleased that people are eager to attend, we do encourage anyone attending to arrive at the time of their appointment so they can register quickly and help us to manage flow," he said.

"We have a number of contingency plans in place, including additional staff on site that can be deployed as needed to help manage any queues."

"We'll learn from this event and that will influence how we use similar mass vaccination events across the programme."

She confirmed workplace vaccinations would begin in the coming weeks with employers including Fonterra and Mainfreight, which were signalled as early participants of the vaccination programme when the general public rollout plan was revealed.

'Everyone in there's pretty pumped'

Snowy Ham, from Auckland, had received his jab and said spirits were high among both staff and people getting vaccinated. "Everyone in there's pretty pumped."

He said the process was pretty smooth so far.

MIT staffer Yashmin Begum was a little nervous about getting the vaccine but said she knew it was necessary.

"I'm getting it for my safety."

She was unsure how many of her colleagues would be getting their first vaccination today, noting that many had received a jab at the Ōtara community vaccination centre. 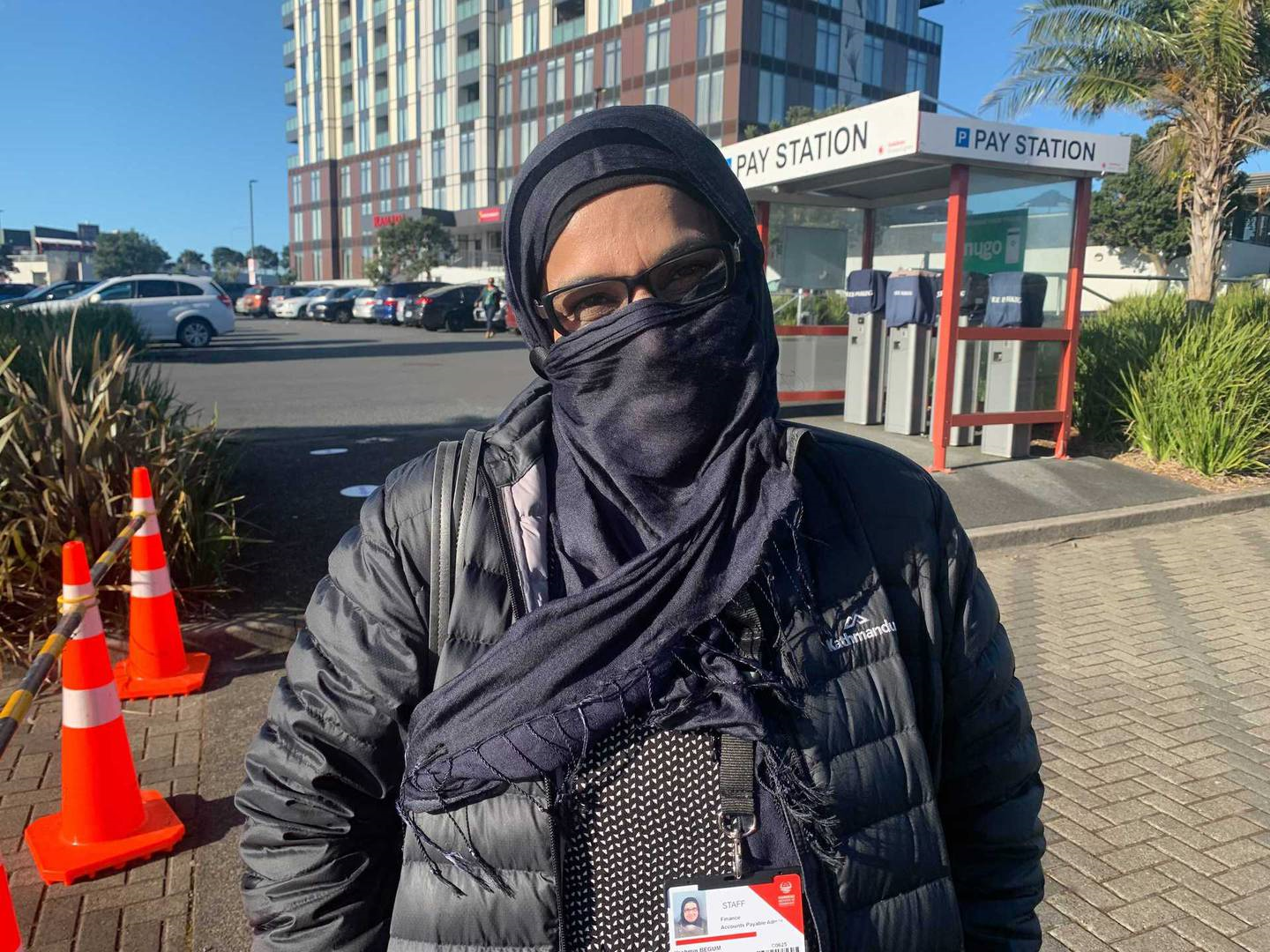 MIT academic centre staffer Bruce Whitfield said the process was a little slow to begin with but became smoother once in the chair.

He said all of his colleagues would be attending the mass vaccination event today.

About 3000 of the roughly 16,500 people booked to get the jab over the next three days were MIT students and staff.

The Harper family were also very complimentary of the staff inside the vaccination centre as they got their first jab. Asked whether communication with the community had been sufficient leading up to the event, Verrall pointed to the fact the event was fully booked out as an indicator of how well the community was consulted. 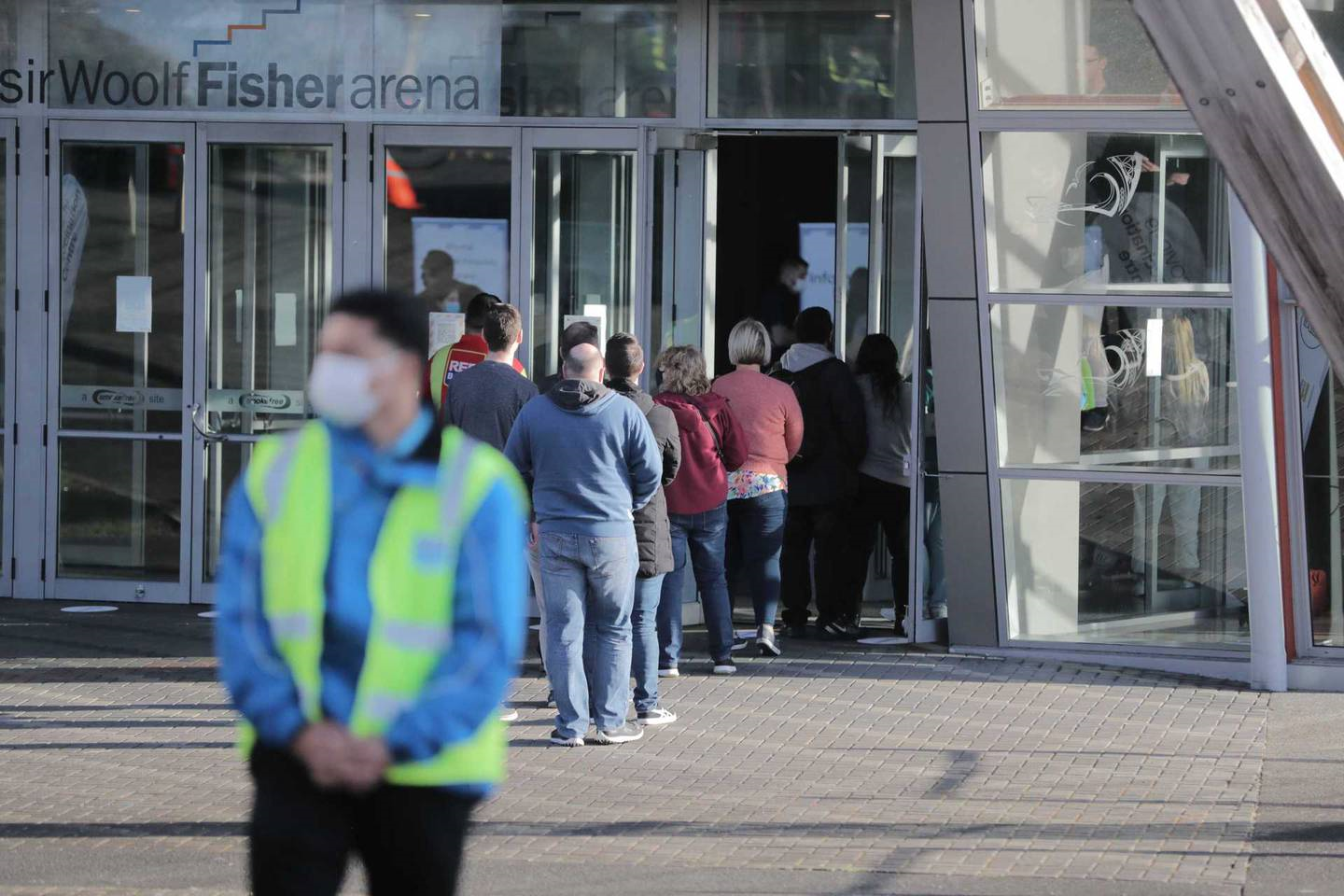 About 5000 vaccines were set to be delivered today with staff arriving at 6am to get a head start on drawing up the vaccine. He said the average time it would take to meet a vaccinator and get the jab would be about 90 seconds, however he expected variability.

NRHCC vaccination programme director Matt Hannant believed those arriving for vaccination would still get a personable experience while getting the jab.

In a release from the Auckland District Health Board, it said it wanted to "thank the local community in South Auckland for getting behind this event".

"This helps to show that there is demand for this type of vaccination event in New Zealand, following their success in other countries.

"Our Mass Vaccination Event is based on an international model, designed to get large groups of people vaccinated efficiently and safely in a short period of time at a single venue."

People coming for the vaccine will come into the arena, queue up and then be directed to a seat in a booth. There are 242 vaccination booths in the centre.

Once seated all of the services will be delivered there.

"This minimises movement and disruption and allows for a higher throughput of people," the DHB said.

"We will have 12 vaccinators operating each day of the event.

"A vaccinator will come with a trolley and administer the vaccine then people will be required to wait in the booth for observation for 20 minutes. There will be a team of medically trained observers assigned to a row who will monitor people and provide assistance if needed.

"Once the 20-minute observation period is up people will be taken by shuttle back to the MIT campus."

The DHB said the event had been fully booked. People without a booking are asked not to attend.

A repeat event will take place between September 10-12.

"Mass vaccination events are just one of the ways we are making it easy for people to be vaccinated," the DHB said.

"We offer a range of options so that people can get vaccinated in a setting that suits them, ranging from our community vaccination centres, through to GP clinics, pharmacies and mass vaccination events.

Prior to the event kicking off, the Auckland DHB had administered 673,000 vaccine doses in the Auckland metro region.