Ministers would fully review the alert levels next Monday, she said.

If there were no further cases in the coming days, New Zealand could be in a position to move to alert level 1 next week. More details on what alert level 1 would look like would come this week.

New Zealand should feel proud of its efforts, Ardern said.

So far the tail or spike of Covid-19 hadn't eventuated and there was increasing optimism it wouldn't happen.

"Our strategy of going hard and early has paid off."

But authorities needed to see if more cases came through after relaxing restrictions to mass gatherings to 100 on Friday.

Ardern was joined by Education Minister Chris Hipkins for the post-Cabinet press conference to give more details about the free trades training programme announced in the Budget.

Ardern said unfortunately the economic damage of the virus was something every country was experiencing but the Government could ensure no one was left behind.

The Targeted Training and Apprenticeships Fund was an "important part of the overall plan".

It would mean any form of apprenticeship would be free from July 1 this year, which should encourage businesses to take on apprentices.

Hipkins said many New Zealanders would be looking to re-train as a result of Covid-19.

The package was designed for all learners, not just school leavers, he said.

Earlier today Ardern had strengthened her criticism of the Black Lives Matter protests, saying "it was not right" and the rules were there for a reason. 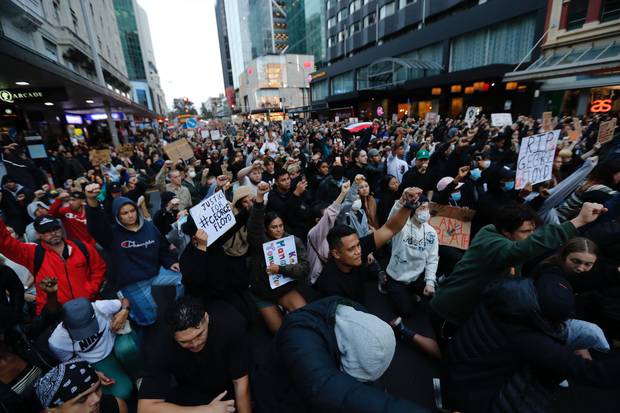 Thousands of Aucklanders marched down Queen St yesterday to protest the killing of US man George Floyd. (Photo / George Floyd)

"They have breached the rules. It was not right. New Zealanders have given up a lot and I need to keep asking the team of five million to stay together so we can reach the finish line. I understand the sentiment but I cannot condone the breaking of the rules."

Ardern said the decision on whether the protest organisers should be prosecuted lay with police as the Government didn't intervene with enforcement.

She was asked why the Ministry of Health and the police didn't put out notices advising against the gatherings.

She said "we have all put out the message, don't gather - it is not a good idea".

New Zealand was in a position to consider to moving to level 1 earlier than expected because of the success of the lockdown.

At alert level 1, the border restrictions would remain in place with intensive testing and physical distancing encouraged, but there's no limits on gatherings.

Ardern said Cabinet considering the move to level 1 early wasn't a result of Deputy Prime Minister Winston Peters' pressure, rather a result of the encouraging evidence.

Unconscious bias in the police

In 2015, Bush said Māori over-representation in offender statistics could be partly explained by unconscious bias among officers.

In 2017, a programme was rolled out to address the unconscious bias.

At the time, Bush said officers didn't racially profile people but acknowledged unconscious bias might feel the same to the person who's on the receiving end.

On the Armed Response Trials (ART), Nash said he was against arming the police but said it was a decision for police as to whether they should be rolled out.

He was expecting a report on the recommendations from the trials to be presented to Commissioner Andrew Coster in mid-June.

Ardern said she'd always been "totally opposed" to the general arming of police.

And New Zealand had to "continually strive" to address issues of unconscious bias in its systems, she said.