More than 30 police officers have lined up outside the gate which allows access behind Parliament, in what is believed to be a response to a call from protesters to form a human chain in the area.

It is understood protesters had planned to do it at 10am today but they were turned away before allegedly trying again this afternoon.

Parliament security staff look poised to close the gate into the area but are allowing police vehicles through.

The back of Parliament is currently the only open-access way into the building for all of the staff inside.

Earlier Police Commissioner Andrew Coster said the parliamentary protest in Wellington "shouldn't have got to this", but says New Zealanders would not have accepted the level of confrontation needed to stop it.

Meanwhile, ACT leader David Seymour has broken ranks with other political parties in Parliament, saying it may now be time to rethink the need for vaccine mandates.

Coster told Jack Tame on TVNZ's Q&A programme that on the first night that tents were pitched outside Parliament, it may have looked like police should have gone in.

But he said the level of confrontation wouldn't have been "accepted" by many New Zealanders.

He said there is no doubt the protest is "unlawful and unreasonable" and "clearly this protest has crossed a line" and he is focusing on the safest resolution.

Coster said more than 100 people had been arrested and "capacity had been reached".

Another tactic would be to use force to drive the crowds away, similar to what was seen with the Springbok Tour, but he said that was a low point in New Zealand's history.

Coster said if police used confrontation, they would have to "move in" using batons and tear gas to clear the crowds.

"I think police could clear the protest", Coster told Q&A, but the harm caused wouldn't be "acceptable".

There is an element in this crowd that is unsavoury, and in some cases crossing the line – "it's criminality", Coster said.

Coster said hundreds of protests turn up to Parliament, and it's easy in hindsight to say "we ought to have known this would occur" but he did not think police had "significant enough intelligence" prior to the protest.

"This is a really unpleasant, difficult situation and I'm concerned people are being affected in this way," Coster told Jack Tame.

The plan is to work with organisers in the protest to try and achieve de-escalation and that is the current approach.

He said protesters have been respectful and able to have a conversation.

Coster said a state of emergency in Wellington is not needed right now.

We are in a very complex situation, where it's very difficult to foresee how things are going to track," Coster said, and it was not appropriate to comment on what people "ought to have done".

Coster said the sprinklers were "not a police tactic" but he could not comment on Trevor Mallard's actions.

Coster said there has been a range of funding support behind the protests, but he would not be drawn on whether funding has come from overseas.

"I'm sure we've got a wide range of views in our frontline," Coster said, but he is happy with his approach. (edited)

He said they are speaking with police in Ottawa.

"It is incredibly frustrating for those who have done the hard yards to get through these unusual times we have had," he said. "Enforcement has to be there at a point in time...the tactics have to be appropriate for all involved."

He said the violence used during the Springbok Tour meant there was a loss of trust in police and that could happen with this protest if police have to resort to confrontation, and he wants to explore all other options.

The Police Minister has expressed confidence in him, Coster said, and he's focusing on the job at hand right now, and not on stepping down.

"I think there is a good opportunity to de-escalate," Coster said.

After the interview, Coster told Q&A police do have the power to close roads, but those powers are not "presently engaged".

Meanwhile, tempers in the capital are wearing thin as the anti-mandate protest at Parliament continues to grow and nears its third week.

Multiple reports over the past 12 days cite anti-social behaviour by protesters, including abusing passersby – among them children – for wearing masks, and surrounding streets and buildings have been overtaken by tents, campervans and cars.

The protest camp grew yesterday as a fresh convoy of cars – which began in Auckland – arrived in Wellington.

As protester numbers grew, police warned of "serious concerns" for safety at a concert at the site on Saturday night.

"Police are aware of a planned concert on Parliament grounds this evening and have serious concerns around the health and safety of such an event," police said in a statement.

"We continue to maintain a highly visible, reassurance presence on site, and staff are engaging with the public and protestors to provide advice and, where necessary, take enforcement action."

Police Commissioner Andrew Coster has said police are holding off on stronger enforcement because of concerns it could lead to wider violence and disruption around New Zealand.

"There would come a point in time when [force] is the only option," he told the Sunday Star-Times. "But the downside consequences of that, both locally and nationally, would be significant, and that's something that we would take a high threshold to move to.

"There is a lot of strong feeling being expressed around the country through protest, and how law enforcement deals with that strong feeling will have a bearing on how peaceful we are as a country."

Police confirmed they had attended at least six medical events within the protest and urged anyone parked unlawfully to remove their vehicle and enable ready access to emergency services.

An estimated 800 vehicles are parked illegally around the protest site.

Police cleared illegally parked vehicles on Thorndon Quay on Saturday - 15 were moved by protestors after police spoke with them and two were towed. Most cars, which were originally parked in the median lane, were removed by the owners peacefully.

Police last night added of the illegal parking situation: "Police are also noting the registration of vehicles currently impeding traffic for follow up enforcement action, and structures such as tents and marquees are being removed from any site that does not form part of the main protest area.

"The parking facility at Sky Stadium is at capacity."

Wellington City councillor Rebecca Matthews told the Herald on Sunday police need to find a way to get the situation under control.

"I think that's what Wellingtonians especially want to see: this whole thing contained and not growing."

She said residents were "very scared" and people were reporting "more brazen" harassment that had extended through town.

"It seems to be happening in the direct presence of the police, and without any action being done to protect people."

Despite protesters claiming they're fighting for "freedom", Matthews said Wellingtonians had less and less freedom because of the protest.

She said wearing a mask to keep yourself and others safe had almost become a "marker" to get abused by the protesters.

"We want to see some more active policing, everybody supports the right to protest, we're used to it in Welly, it's part of our city, but we don't think these people have a right to intimidate and harass Wellingtonians.

"Where are the police? We don't want to be the collateral damage."

In response, a police spokesperson told the Herald police recognise the ongoing impact from the protest, particularly on residents in the central city and Thorndon area.

"Police have a significant presence in the area and [have] been visiting some residents, particularly those most affected by the protest."

In a separate statement last night police said they had a team ready to respond to incidents outside the parliamentary precinct.

"Police have attended at least six medical events within the protest and continue to urge anyone parked unlawfully to remove their vehicle and enable ready access to emergency services."

On Friday, the country's top police officer said negotiation and de-escalation were the only safe, and most desirable, ways to resolve the protest.

Yesterday police confirmed the number of people arriving at Parliament grounds to protest against Covid-19 vaccination mandates and a slew of other causes and grievances had increased. 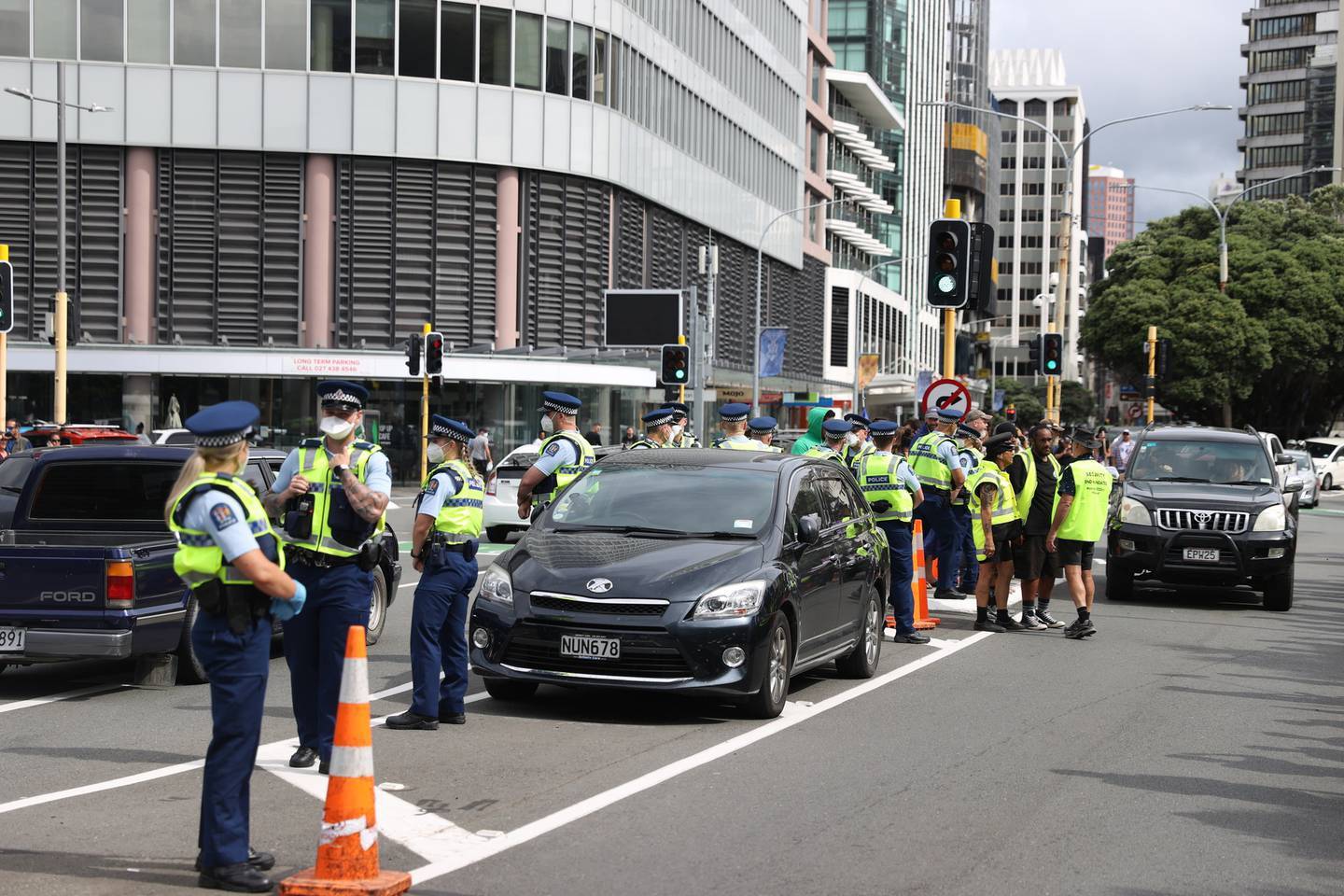 Police around a car in the median strip on Featherston St during a short-lived operation which saw several cars being towed, and others moved voluntarily. Photo / George Heard

"The pandemic is having a significant impact on Wellington businesses, some which are now on the brink of closure," Foster said.

Foot traffic and spending in the central city was down 20 to 30 per cent since the end of last year.

A Hawke's Bay couple, who wouldn't be named, said the mandates hadn't affected their jobs but they were concerned about the vaccine itself, claiming they had friends who were in hospital as a result.

"Why is the media not reporting that?"

According to Medsafe's latest published safety report on January 31, there have been 51,710 adverse events following immunisation reports since the Pfizer vaccination programme began in New Zealand.

More than 9.45 million doses of the Pfizer vaccine have been given in New Zealand.

It had "absolutely been fast-tracked".

"That is not because steps have been missed but because the layers of bureaucracy and restricted funding were removed virtually overnight and companies that normally compete with each other collaborated instead.

"The technology was already available." 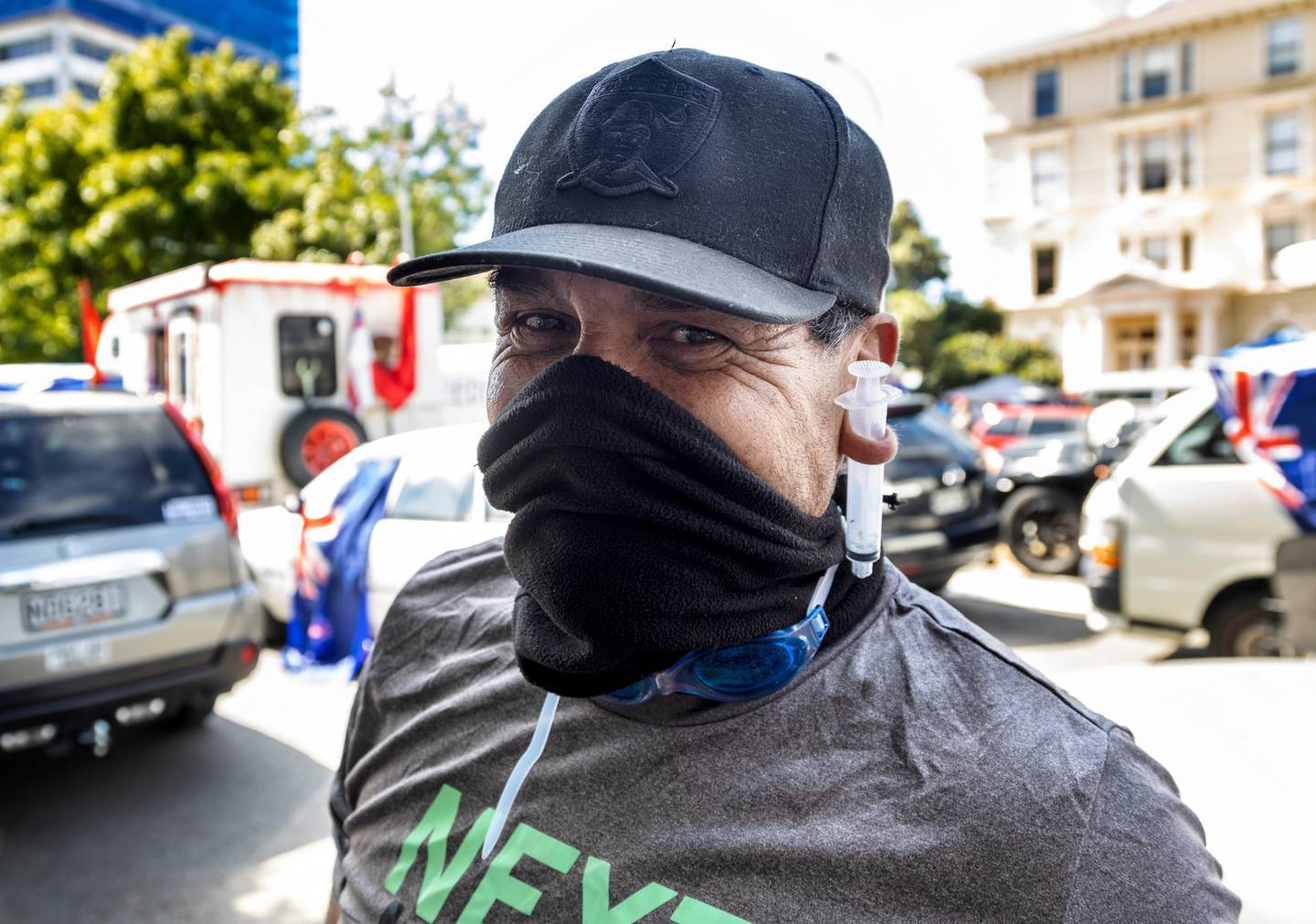 This protester was at Parliament with a syringe ear ring. Photo / Mike Scott

Most demonstrators were peaceful and protest groups had established some internal discipline, Coster said.

He also backtracked on an earlier pledge to start towing vehicles from occupied streets around Parliament, saying that would only escalate tensions.

"We needed to explore the option of that and test what the reaction would be. That approach would have been provocative and unhelpful."

One resident told the Herald on Sunday that although they support the right to protest, it was sad the university had to close for eight weeks, and the impact it has had on some businesses and commuters. 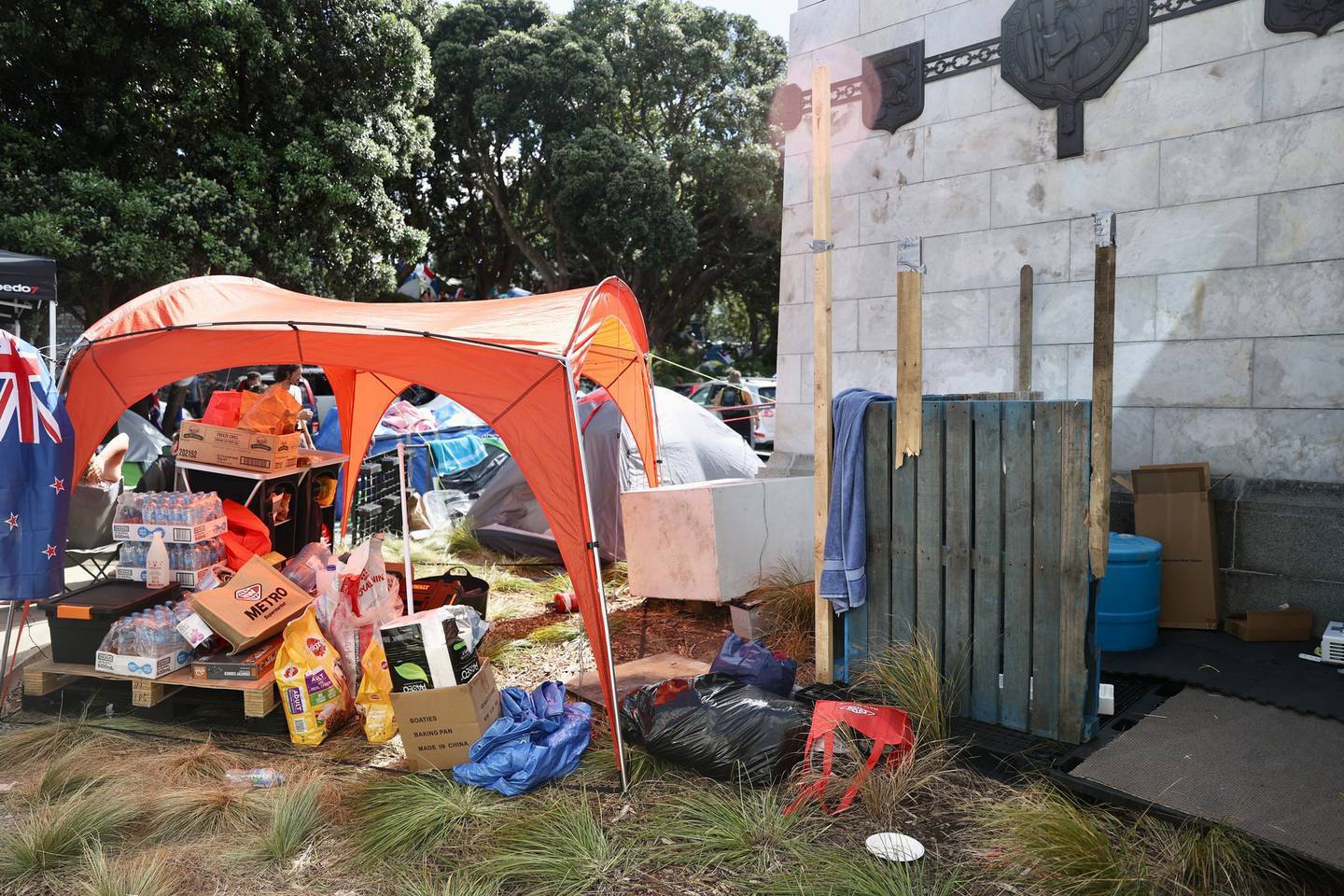 This shower was being built against the Wellington Cenotaph, which commemorates New Zealand's war dead, before being moved away. Photo / George Heard