Anti-mandate protesters are in high spirits, despite being flanked by police holding batons as the Parliament occupation continues into its fourth day.

Several hundred people are gathered on the front lawn of Parliament singing and dancing among the dozens of tents still erected, despite a trespass notice being served.

Police have not yet moved into the crowd as they did yesterday and no new arrests have been made. 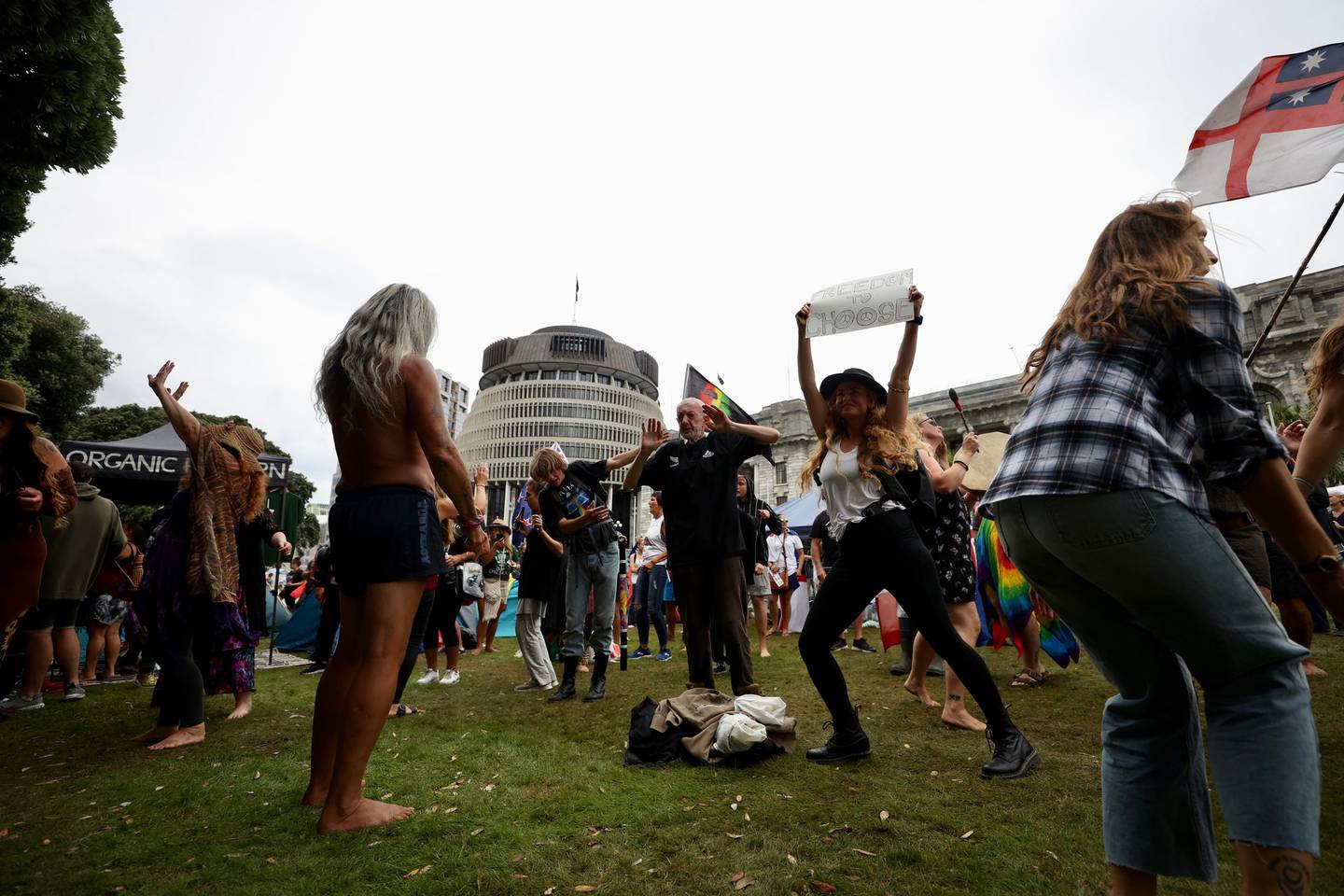 Police will continue to take a measured approach to the protesters who are trespassing on the grounds of Parliament despite being repeatedly asked to leave. "This is an extremely difficult working environment for our frontline staff," Parnell said.

Protesters living in the makeshift camping site dubbed "camp freedom" are expecting more people to join their ranks across the day - including school children.

A large marquee has been erected and people are milling behind barricades patrolled by police, blocking everyone from the steps into Parliament.

Security arrangements in parts of the Parliamentary precinct have changed again today after video taken of the protests from nearby Bowen House surfaced on social media.

Video taken from a high vantage point opposite the Beehive was uploaded to a social media channel claimed by white nationalist group Action Zealandia.

This Action Zealandia video was taken from LT McGuinness's construction site in Bowen House. This is the building providing secure access for staff to the Beehive.
We have spotted Action Zealandia members joining the protest in the evening. pic.twitter.com/aEXhCLnEa8

Paparoa, which claims to monitor far-right activism, said the video was shot from a construction site in Bowen House, which provides access for staff to the Beehive.

"We have spotted Action Zealandia members joining the protest in the evening," Paparoa added.

The origin of the video has not been verified, but it was uploaded to an Action Zealandia channel on Wednesday afternoon.
"We have seen the video, and the entrance to Bowen House has been closed," Speaker of the House Trevor Mallard said.

As police moved in to formation earlier this morning, some protesters could be heard yelling "remain peaceful" over megaphones - but other protesters hurled abuse at the arriving officers.

One speaker addressed the waiting crowd and encouraged them to stay calm as police poured into the Parliament forecourt.

They could be heard referencing rumours police would carry riot shields.
"Is there a riot here? No!" he said to the crowd.

He encouraged the protesters to be peaceful and "let that vibration and that frequency permeate this whole place." 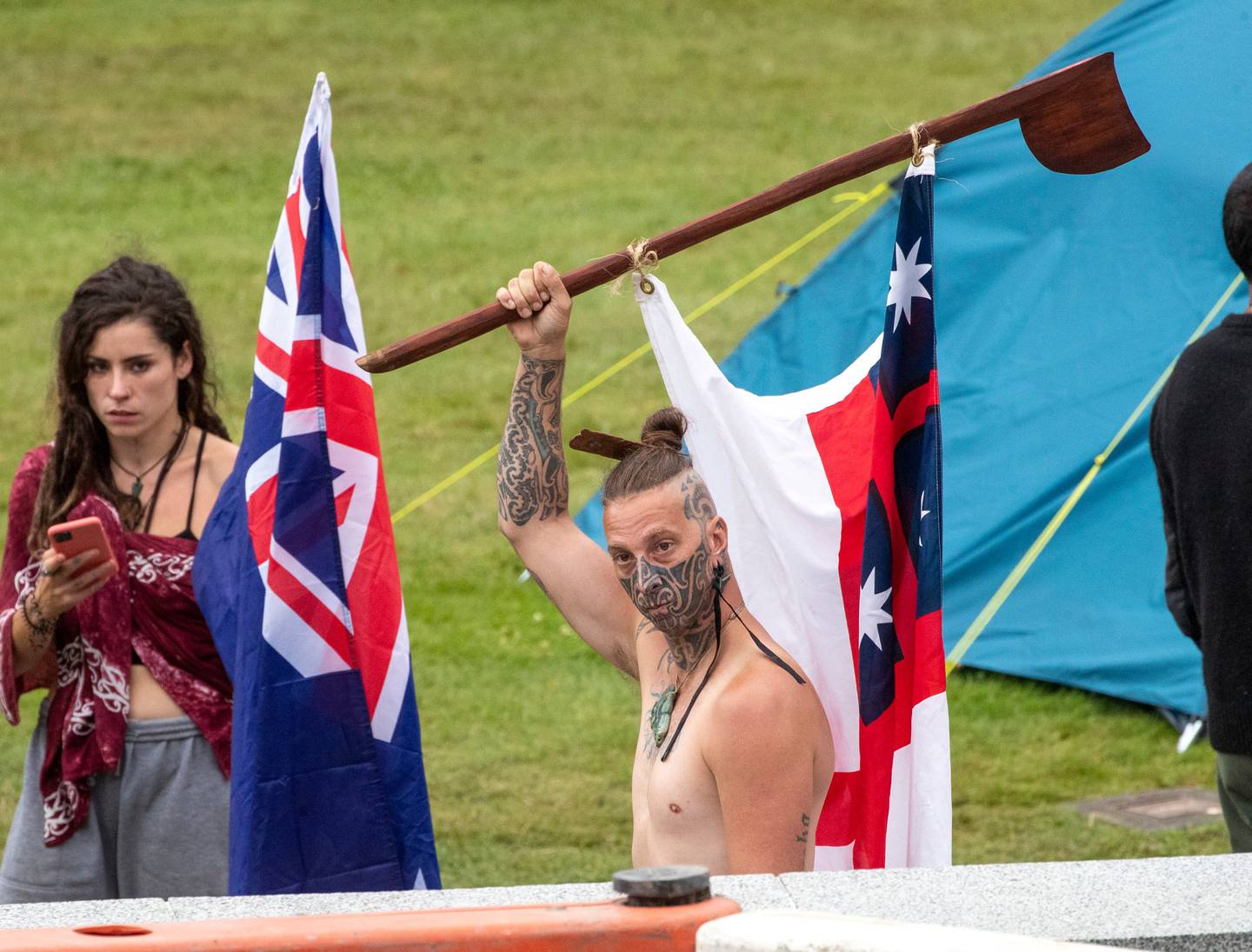 He also said there was nothing cowardly about leaving the space if protesters felt unsafe or uncomfortable.

Protesters say the standoff will last until mandates over vaccines are removed.

Food services and portaloos have been set up and there are reports of reinforcements arriving from across the country.

This morning those taking part in the protest had begun livestreaming from Parliament's front lawn, which they've named "camp freedom".

A member of the camp says the crowd was calm and relaxed this morning, and their spirits had not been dampened by a spot of rain and wind.

He said there were a lot of rumours going around about the military being sent in today, and police reinforcements coming in from other parts of the country.

He pointed to extra protesters heading to Wellington too. 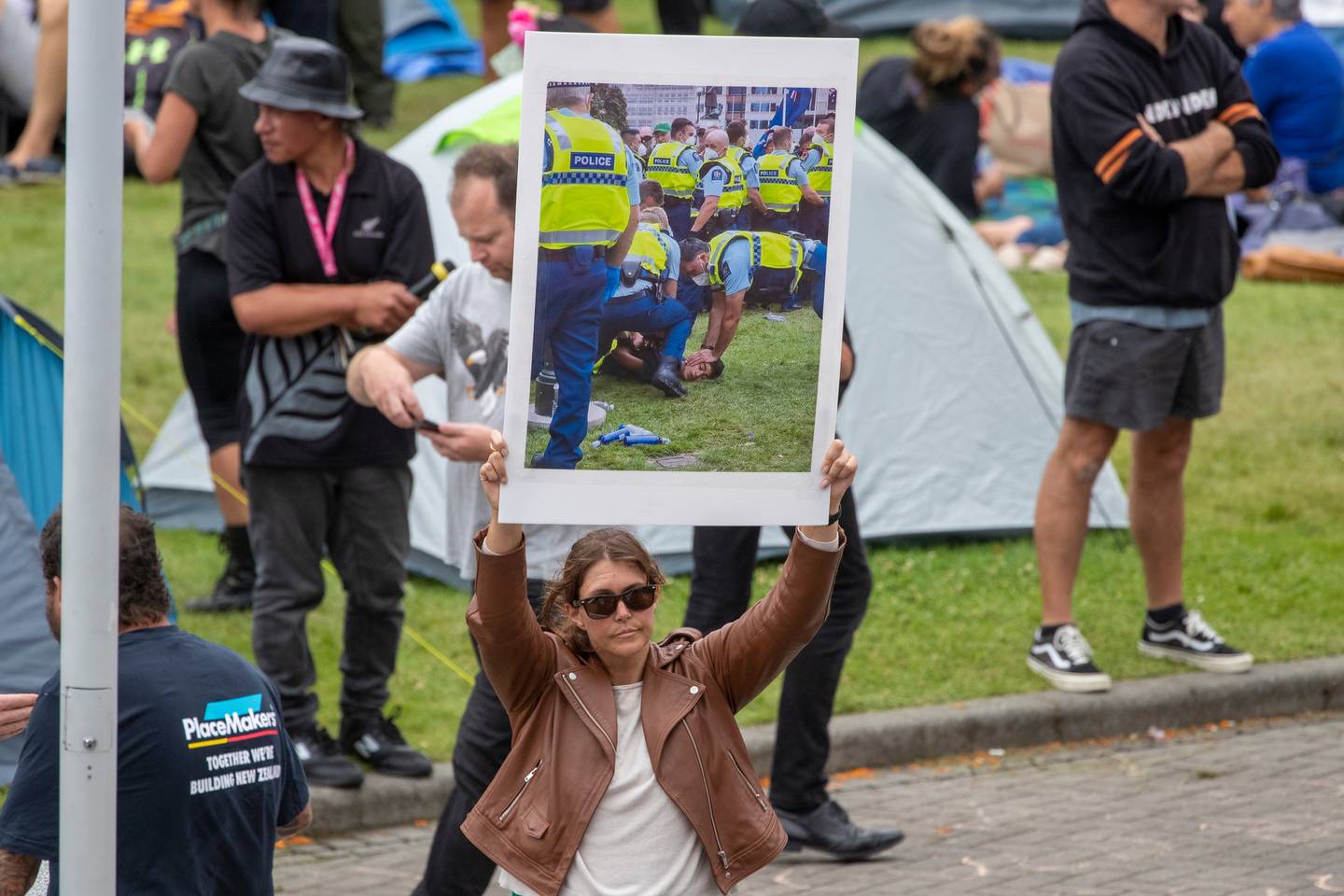 A protester holding aloft a photograph from yesterday's arrests during the anti-vax and mandate occupation on Parliament's front lawn. Photo / Mark Mitchell

"People who've seen the footage from yesterday have jumped in their cars and are joining the protest today. We are resolute, more people are coming because of the police action, and it's about to get a whole lot bigger."

The man also spoke of the concern from protesters that police would make a move overnight to clear the camp.

"Credit to the police, they did not raid last night, they were told there are children in these tents."

Protesters camping out on the parliamentary precinct's front lawn could be seen erecting a large marquee as protection against the heavy rain forecast for the capital.

A protester has told an NZME reporter they are expecting more people to join them today, including a big group of school children.

"A whole lot of kids will come in today and they'll see how happy and peaceful everyone is," he said.

This morning Attorney-General David Parker poured scorn on the protesters occupying Parliament's grounds, branding them "misguided" and "believing in garbage".

"You've got a tiny group of New Zealanders who are misguided because they believe the garbage that's on social media and they're blocking roads."

He said the actions of the protesters were preventing local businesses to open, people had been assaulted and abuse and threats had been hurled at journalists.

"This is different," said Parker. "People obviously have the right to protest. I'm a political activist and I've been protesting on the streets since the 1970s but we expect people to abide by the law and we expect the police to enforce it and how they do it is for them." 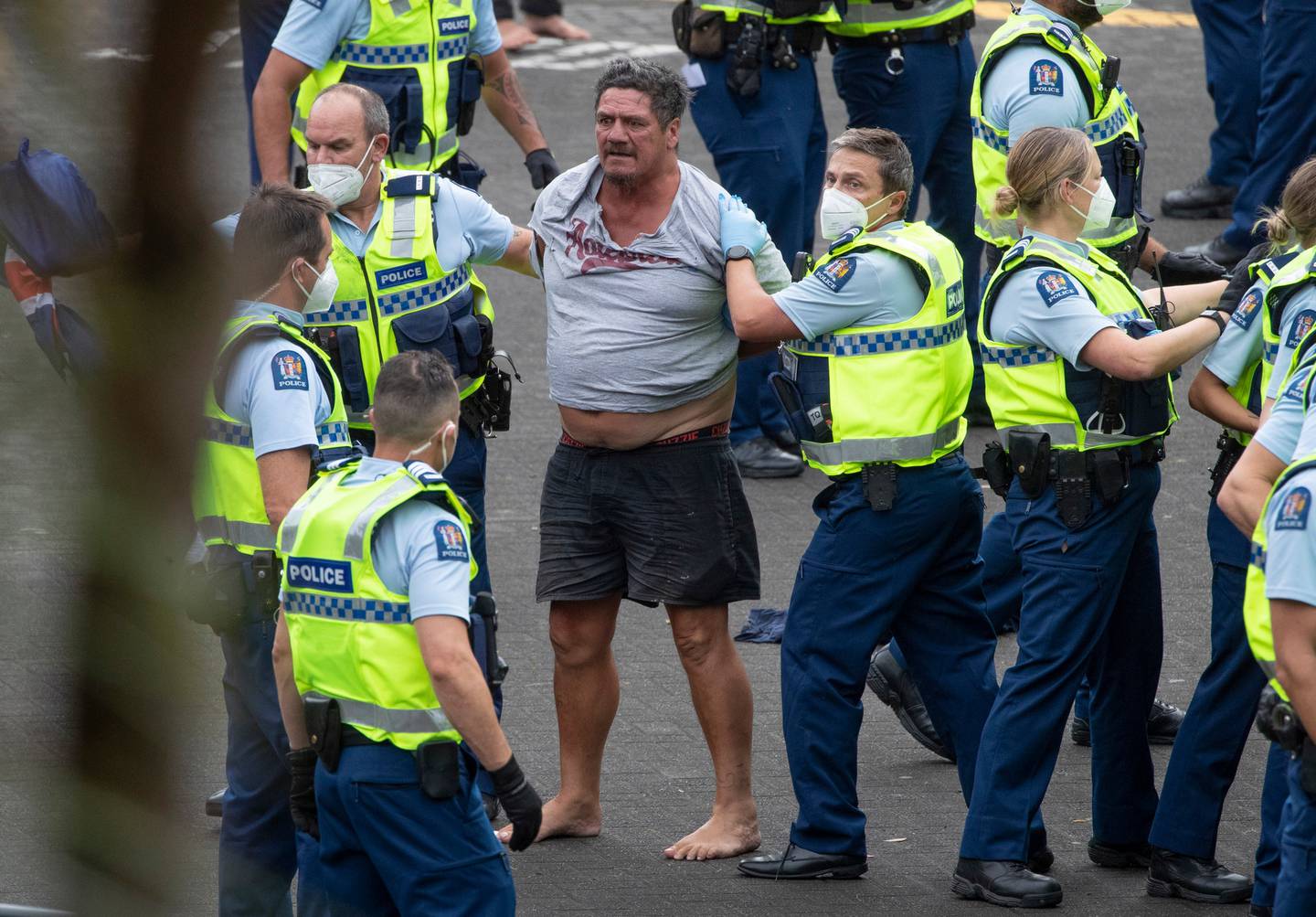 He also took issue with the former deputy Prime Minister Winston Peters who tweeted that if you occupy private land like Ihumātao you can stay as long as you want and were embraced by the government whereas if you occupied public land you would be trespassed on the same day and labelled a minority.

Kāpiti Mayor K. Gurunathan says he "totally supports" Wellington Mayor Andy Foster and police to swiftly resolve the protest, as any effect it has in Wellington will flow through the other councils.

"I call on my regional mayoral colleagues to join me in totally supporting the Wellington Mayor and his council, working with the police, to take quick and effective action to stop the disruption caused by this remnant and unruly ramshackle bunch of protestors."

He added he had attended protests too, including the 1981 Springbok Tours, but the protesters at Parliament are "abusing [their] democratic right. This remnant at Parliament grounds now is not representative of the peaceful protestors who exercised their democratic right to protest, made their point, and left".

Yesterday, more than 120 people were arrested in a volatile day of "unprecedented" protests, with stretched police forces indicating the anti-vaccine mandate occupation could last days.

Tensions flared as police moved into "enforcement mode", and scores of officers advanced on the crowd.

Parnell said on top of 900 officers in the district another 150 had been pulled in from across the country, with potentially more to come.