Protesters at Parliament can be seen to be making more permanent arrangements for toilets, 20 days into their occupation in Wellington.

It comes after hostile scenes overnight that saw a man arrested inside Parliament grounds, prompting police to reiterate the occupation is "not a safe place".

Protesters could be seen on the tools yesterday assembling plywood stalls outside the Court of Appeal, with at least three new porcelain toilets ready to be installed. 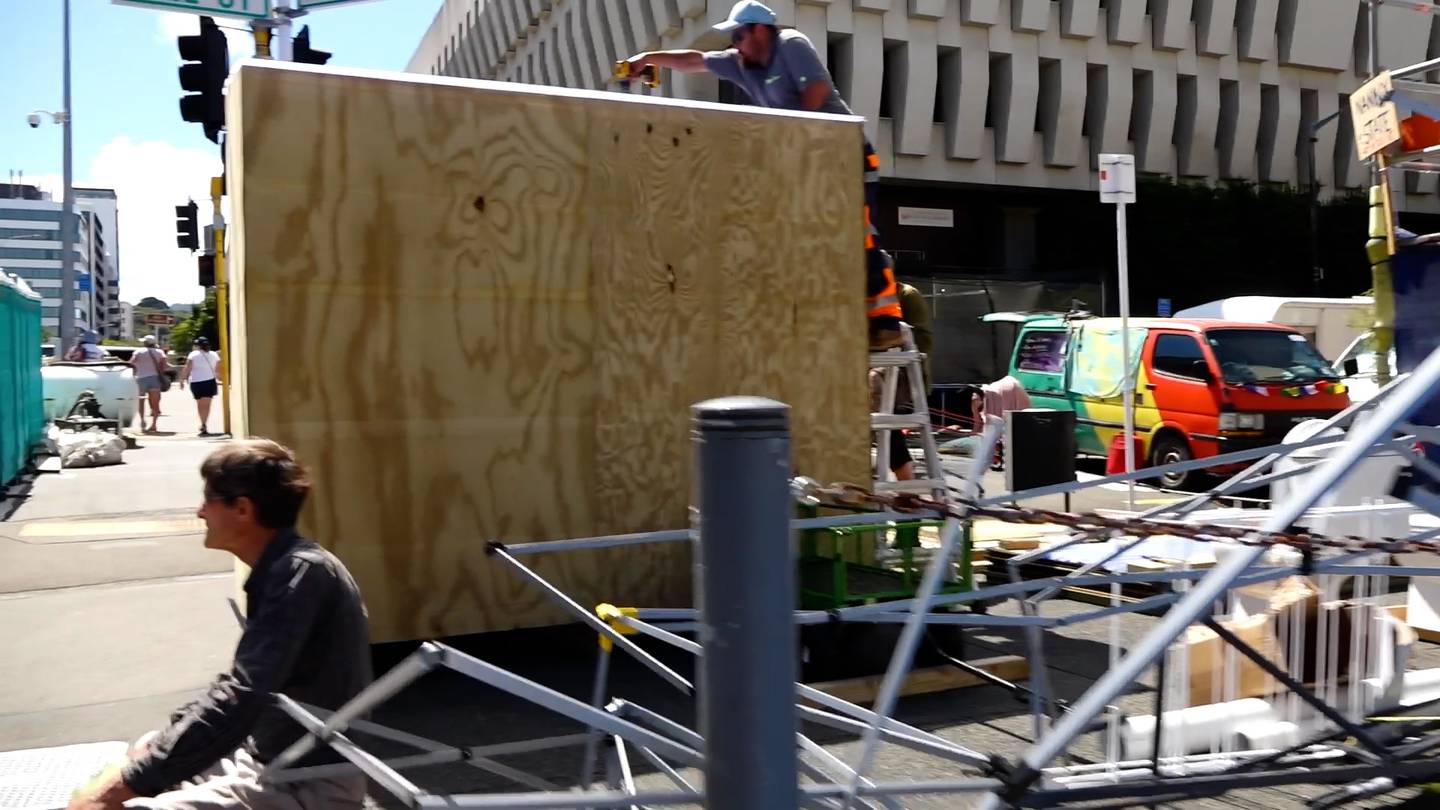 Plywood stalls were being erected near the Court of Appeal. Photo / Jed Bradley

Wellington City Council spokesperson Richard Maclean says it's not yet clear whether the toilets have been plumbed into the storm or wastewater system.

"If they have plumbed it into the stormwater system, then it's going to be flowing straight into the Harbour, which we don't want," he said.

"We're in discussions with the Regional Council and other interested parties."

"We're going to be talking to the police because we can't go down there, take any kind of action or even investigate without them."

He said they would be talking to the police over the next few hours. 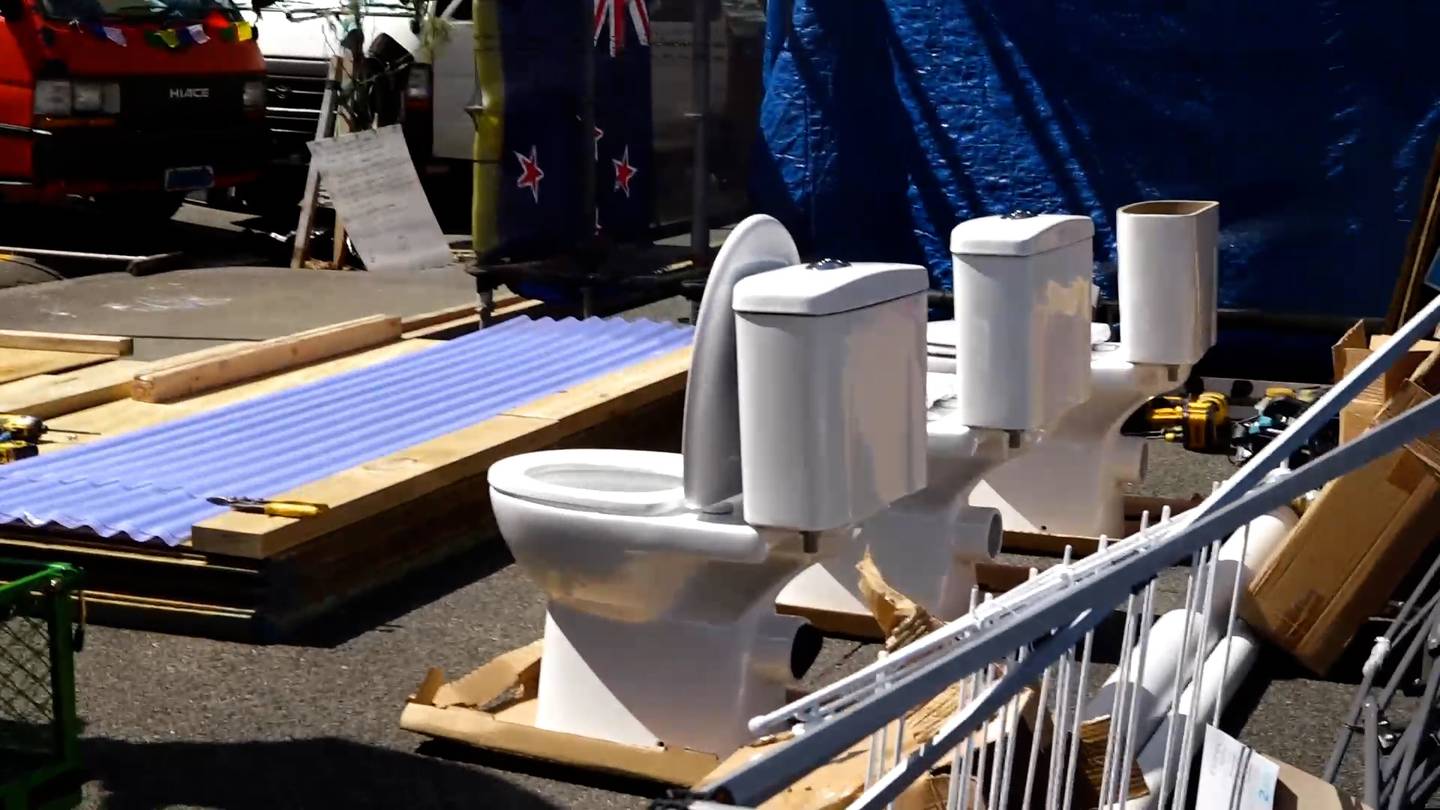 Meanwhile a 35-year-old man has been arrested inside Parliament grounds, charged with inciting violence, following clashes with police overnight.

In a statement released on Sunday, Police said they are concerned about the deteriorating environment at the Parliament protests, and maintain that it is not a suitable environment for families or children.

"Aggressive behaviour from protesters, extremely poor sanitary conditions, the confirmed presence of Covid-19, and the number of unwell people amongst the group all make for a an unsafe, and unpleasant environment for anyone thinking of joining the activity," they said.

"We are urging people intent on attending the protest today or the coming week, to stay away, this is not a safe place," they said. 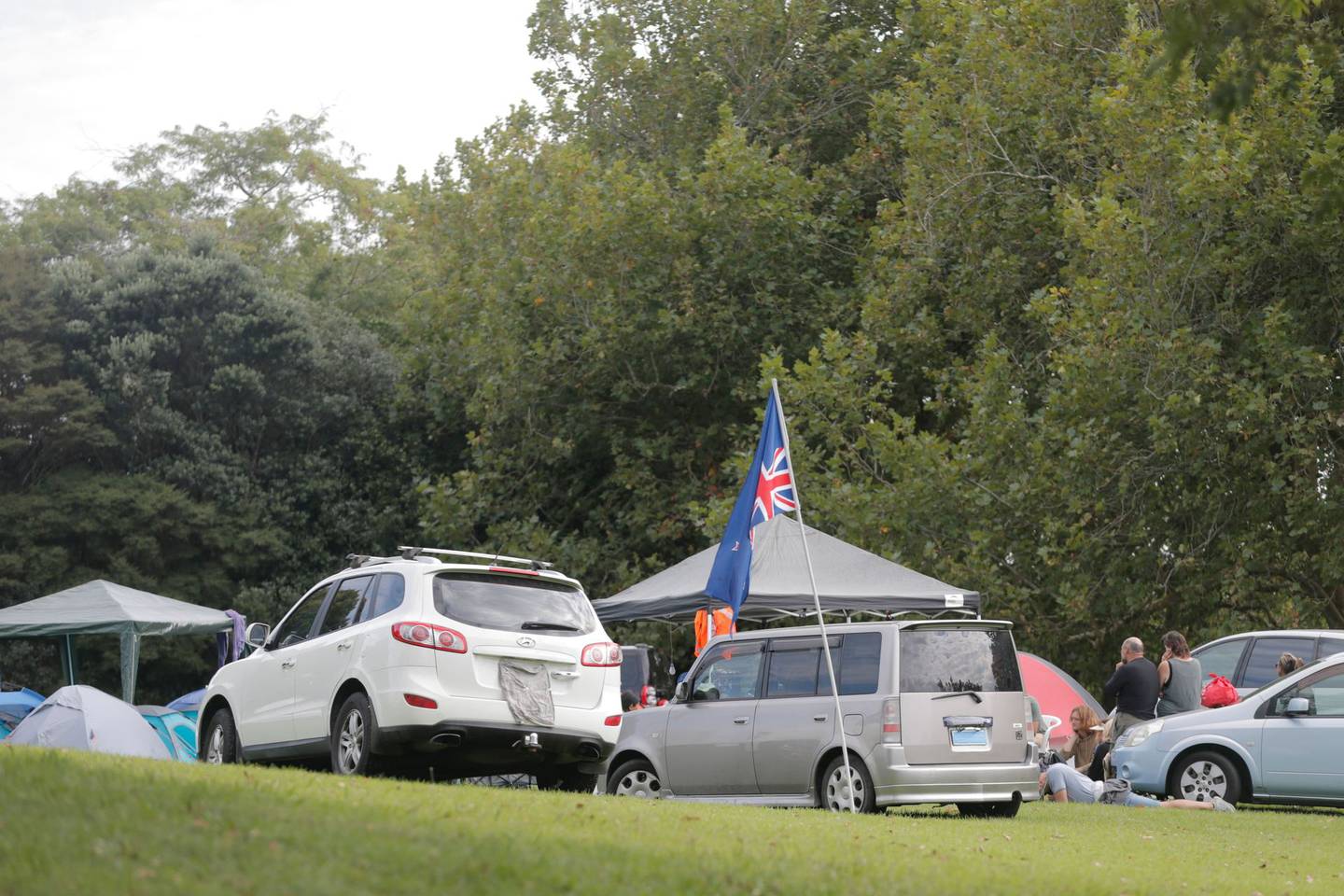 Protesters have erected tents at the Domain in Auckland. Photo / Alex Burton

The man arrested is due to appear in Wellington District Court next week.

They estimated there were about 300 vehicles inside the cordoned area this morning, and said they would continue to maintain highly visible presence in and around Parliament grounds.

Around 200 protesters gathered at the forecourt this morning, with reporters at the scene describing fighting within the protest group.

Earlier a group yelled at one another at the front of Parliament, while police watched on, looking to make a move before the group dispersed.

There is no visible police presence at the Domain in Auckland, where at least a dozen tents have been erected in an anti-mandate protest.

Police say a small number of protestors are occupying a site at the Auckland Domain.

Inspector Jacqui Whittaker says police will continue to monitor the situation today and respond to any issues if they arise but says there were none overnight.

She says police continue to work with the Auckland Council.

Vehicle access to the Domain is blocked at this stage but Whittaker says discussions are ongoing.

Whitakker says police respect the lawful right to protest, and will monitor the situation to ensure that there's minimal disruption to the public. 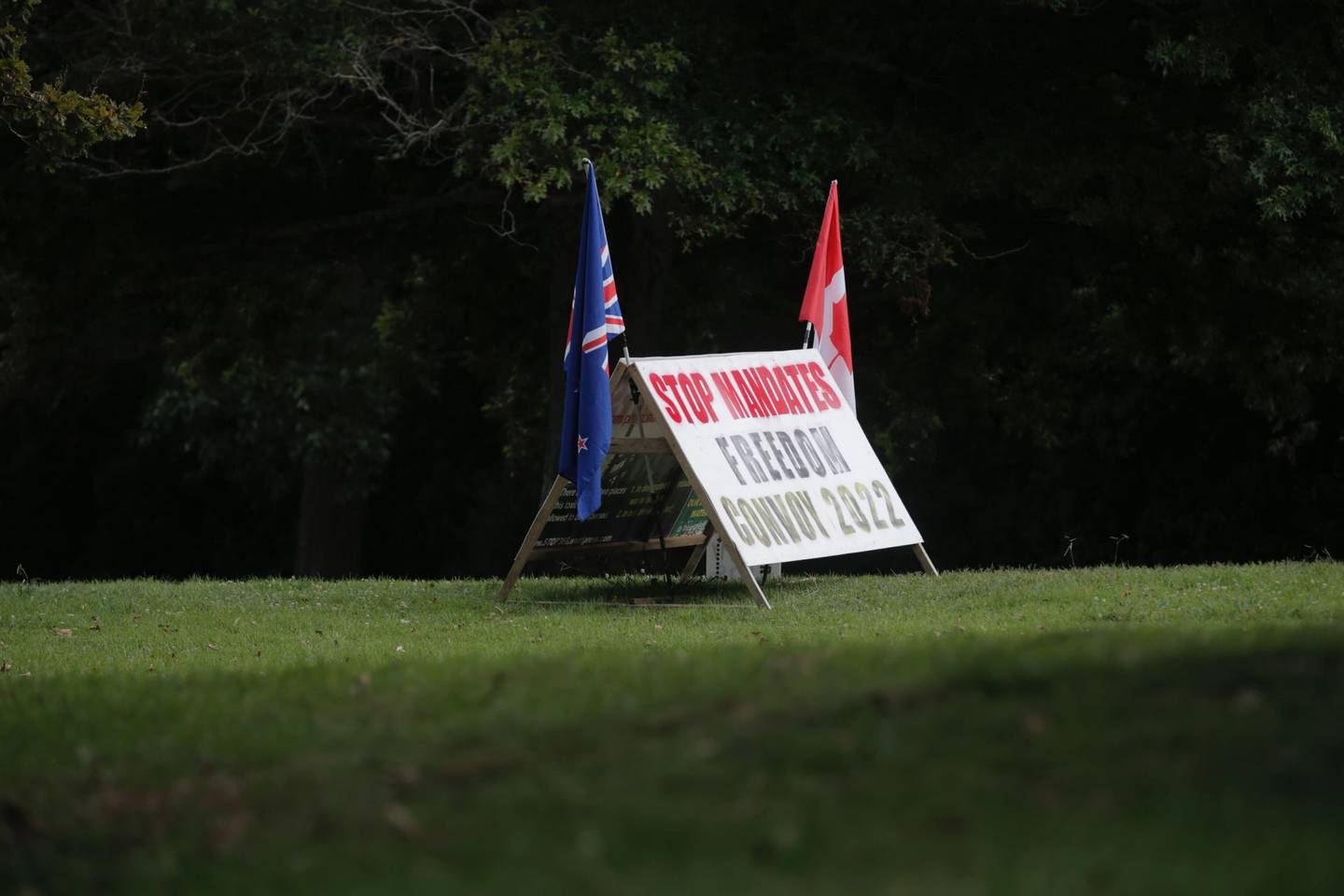 Police say they are keeping an eye on the protest at the Domain. Photo / Alex Burton

Tensions flared in Wellington last night as police dressed in riot gear rushed to the protest site, in response to an apparent influx of people trying to arrive.

Reporters on the ground described a rowdy and noisy scene, with protesters cheering, singing and speaking into megaphones.

A forklift, used to move concrete barriers, arrived back at the scene and was being followed by several protesters, while motorists in cars sounded their horns as they drove in circles.

Several police vans arrived at the protest, where they transported police in riot gear to another location. Paramedics were also at the scene.

Other police gathered near the bus interchange.

Love is in the air on the front lawns of Parliament today while thousands crossed Auckland's Harbour Bridge on day 19 of anti-mandate protests. Video / Brett Phibbs / Michael Craig

Earlier paramedics attended to a small number of officers who were spat on by protesters at the protest perimeter, saying it was "very disappointing behaviour".

Despite some progress being made, protesters and police continue to clash over arrivals who have shown up hoping to join the occupied zone.

Yesterday police formed a line, blocking access into the bus interchange area, while protesters formed their own line with their backs turned to police.

A person was arrested in relation to an incident in which a strop had been tied to a bollard and then to a car tow ball.

As the lead protester and a police officer were arguing, the driver of the car lurched forward, almost rolling the bollard onto a nearby woman. 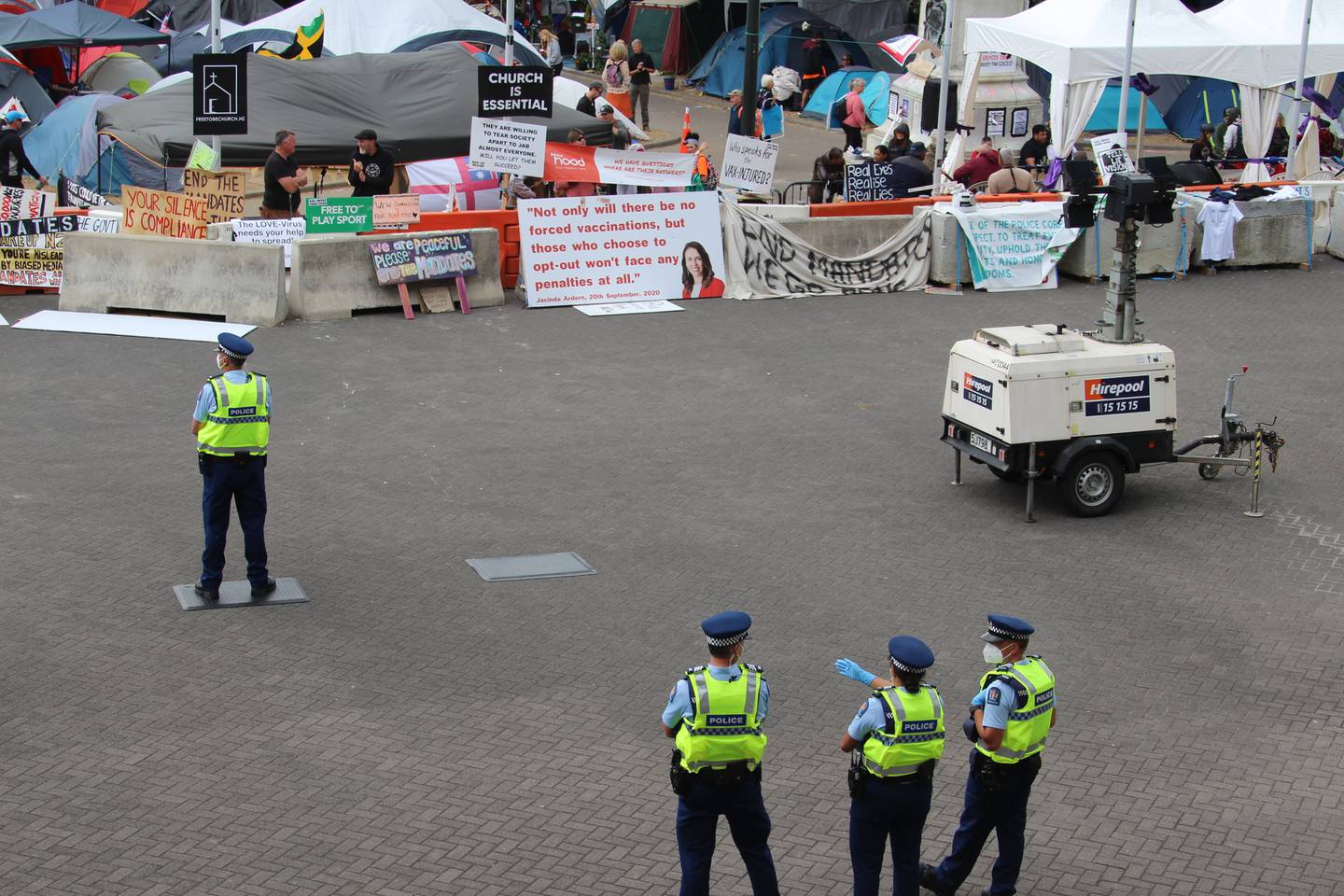 Around 200 people gathered on the Parliament forecourt on Sunday. Photo / Jed Bradley

Fortunately, the strop hadn't been tied properly and it let go before the bollard tipped.

Police had been conducting "reassurance patrols" at Pipitea Marae and with residents who live within the perimeter of the protest.

Any vehicles which arrive and park illegally outside of the protest perimeter may be subject to towing and impounding, police warned.

They estimated yesterday about 300 vehicles remained in the cordoned area.

Police say around 200 people turned up to join the occupation yesterday, fewer than they had expected.

But they continued to urge people against travelling to the protest, stressing yesterday the protest site is "unsanitary", with some protesters displaying "aggressive behaviour".

There has also been a growing number of Covid-19 cases connected to the occupation, with the Ministry of Health warning the protest is a potential super-spreader event.

Protesters returning from Wellington were beginning to show up in hospitals around the country with Covid-19, the Ministry said.