COVID LATEST
* The new traffic light system - all you need to know
* Popular beach among new locations of interest
* 'Entering Red Zone': Inside a Covid ward and ICU
* The Covid drugs that will help us open up - what we've bought and what we haven't
* 'I can't breathe': Young Kiwi mum's life and death battle with Covid
* Claire Trevett: PM has promised an oasis for the vaccinated but will it be a mirage?

Prime Minister Jacinda Ardern hopes fully vaccinated Aucklanders will be able to leave the Delta-hit city by Christmas - but she can't give any guarantees, even if the city hits the 90 per cent vaccination target.

That's because there remains a risk of an Aucklander taking the virus to another part of the country and sparking a new outbreak, and that risk increases dramatically if the boundary is opened to one million fully vaccinated Aucklanders.

This threat was underlined yesterday, firstly with two cases that popped up in Northland who were contacts of a known case in Auckland, and secondly with another new high in daily case numbers - 129, including 120 in Auckland.

People also won't be able to travel into Auckland until every DHB around the country hits the 90 per cent target, due to the risk of catching Delta while they're there and triggering an outbreak when they return home.

Hitting those targets could take months, given several DHBs are well below 80 per cent of the eligible population with only one dose.

And even if those targets are reached, there would still be pockets of thousands of unvaccinated people around the country that would face localised lockdowns if the virus crept in.

Cabinet will review how each DHB is tracking on November 29, with Ardern promising to take a "pragmatic" view.

Yesterday Ardern unveiled the Government's strategy for a highly vaccinated population, which aimed to suppress the outbreak in Auckland while continuing to chase elimination in the rest of the country.

The new traffic light system would replace the alert level system, but only when every DHB in the country has hit 90 per cent vaccination coverage of the eligible population.

Aucklanders could move out of level 3 when all of its three DHBs hit the target - by early December on current trends - but the hard boundary surrounding the city would remain as long as any of the country's other DHBs were below 90 per cent.

"We want people to be able to move around knowing that they don't pose risk to areas that have low vaccination," Ardern told the Weekend Herald.

"That's the benefit of having those high vaccination rates across the board."

Officials are working on how fully vaccinated Aucklanders with a pre-departure negative test could safely travel out of the city.

"We know how important this is and we're working very hard on it, but we're also being open about the challenges," Ardern said.

"We want to have the ability to do this though before the Christmas and summer period." 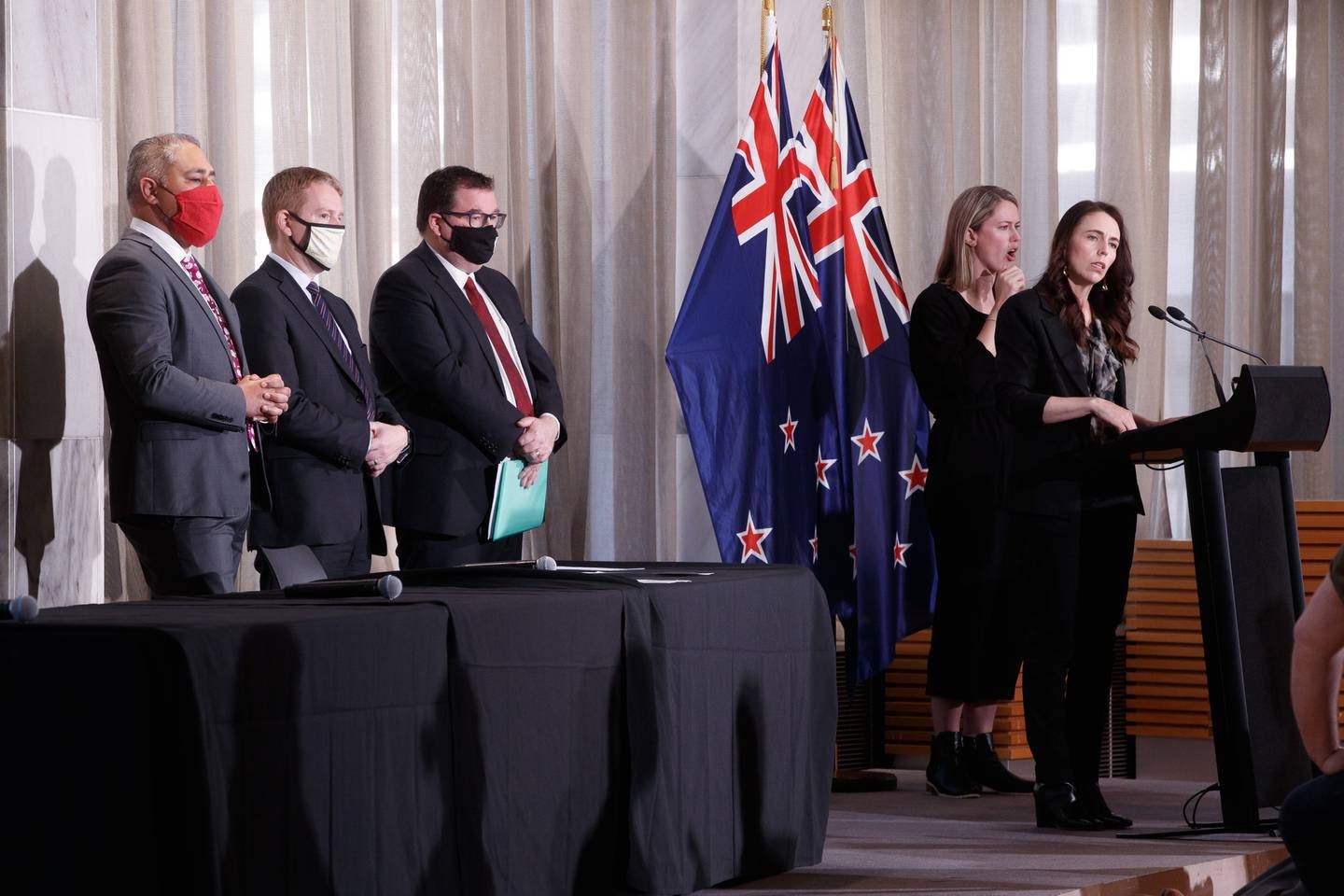 Te Pūnaha Matatini principal investigator Dr Dion O'Neale said the risk of Aucklanders leaving the city and spreading Delta to other parts of the country before the targets are met could be reduced.

"We would want to see high vaccination rates, both within Auckland (reducing onwards transmission), and in the regions where Aucklanders are travelling to (reducing new infections).

Dangling the prospect of travel for the fully vaccinated is one of several incentives which, Ardern conceded, created two classes of Kiwis under the new system: the jabbed and the unjabbed.

But even if the country hit 90 per cent coverage of the eligible population, there would be still be about 1.2m unvaccinated people across the country, including about 750,000 children under 12.

Te Pūnaha Matatini modelling shows this would lead to 1557 deaths a year and 878 peak hospitalisations.

Ardern said this assumed the "orange" setting in the traffic light system, so those numbers would shrink by using the "red" setting or, where necessary, through localised lockdowns.

The number of deaths would also fall dramatically to 50 a year, if 90 per cent of children aged 5 to 11 were fully vaccinated; Pfizer is yet to apply for Medsafe approval for this age group, but Ardern expected it to happen shortly.

She shied away from saying how many deaths were a reasonable trade-off for having a more open country.

"I just want to make sure that everyone has the protection provided by that vaccine ... [while] at the same time giving movement back to the people who are vaccinated, because they have gone out and done that, and now they're waiting to be able to move again.

"That is the balance we're trying to strike."

Public Health Physician and Māori health senior lecturer Dr Rhys Jones said it was "extremely disappointing" that there were no Māori or Pacific targets.

"Not only have Māori in particular been neglected in the vaccine rollout, our communities may now be exposed to extremely high risk due to the failures in that rollout."

Māori vaccination rates are well below the national average, and double dose coverage for younger age cohorts is as low as 30 per cent. The current trends point to Auckland being able to move out of level 3 by early December, but the boundary will remain in place until every DHB hits 90 per cent. (Photo / Alex Burton)

The Government announced a new $120 million programme to fund Māori, iwi and community providers to reach Māori who are yet to be vaccinated.

"There is still time and we're still giving it everything," Ardern said. "We've got to try and lift those vaccination rates in those communities."

It wasn't workable to have vaccination targets within each region to ensure there were no pockets of any unvaccinated people, she said.

Instead, localised lockdowns and surge vaccinations would be used to protect such pockets - such as in Kawerau or Murupara.

"We have enough data into particular suburbs. We can see highly unvaccinated pockets. We can go in there and really try and drive up those [vaccination] rates to support the community.

Localised lockdowns could still fail if people ignored the rules, but Ardern said that wasn't any different to what happened now.

That didn't mean the possibility of non-compliance didn't worry her, though.

"Everything causes me anxiety with Covid. Just take that as a general underlying assumption."

There are also valid concerns about whether particular DHBs will even hit 90 per cent.

Tairāwhiti is only at 75 per cent coverage for a first dose, while Northland, Lakes, Whanganui and the West Coast are also all below 80 per cent.

Cabinet will review progress towards the targets on November 29, which could also see the targets themselves under review.

"If we need to do things differently, it'll be a chance for us to try and deploy assets in different ways, but we will also be pragmatic," Ardern said.

She has flagged the possibility of the South Island moving into the new system if every DHB there - including West Coast - has hit the target.

But it was too hard to put robust borders in place around each DHB region, so South Islanders will be watching progress on the West Coast, while North Islanders will keenly watch Tairāwhiti, Northland, Lakes and Whanganui.

National leader Judith Collins said the new system was confusing and there was still "no hope" for Aucklanders, while Act leader David Seymour said people's freedoms were dependent on "the laziest person in your community choosing to get vaccinated".

Ardern acknowledged the plan could lead to accusations of one region holding everyone back.

"I don't want to create a situation where anyone feels necessarily held back by a region, but instead see what we can do to help and support that region to get vaccination rates up," she said.

Delta may be here to stay in Auckland, but she said there was plenty to gain from keeping the virus out of other regions.

"We don't want to treat Covid like a seasonal illness. I don't want people to go to work and wonder whether or not their workmates sitting next to them has Covid-19.

"I do want it to be something that we treat as carefully as we have to date."