The National Party is calling for mass vaccinations in schools in light of new data that signals at least 85 per cent of the overall population needs to be vaccinated against Covid-19 to avoid lockdowns and thousands of deaths.

The new modelling report has indicated New Zealand's death toll from Covid-19 could fall lower than that from seasonal flu - or it could soar in the thousands - depending on how high the country can lift its vaccination rate.

Auckland University epidemiologist Janine Paynter says the science of modelling is a very good way to help decide what to do - and told Newstalk ZB's Mike Hosking the model released yesterday is pretty good.

The assumptions made in the model - such as different rates of testing, tracing and isolating - were good, which gave her reassurance that the model was robust. It also used real-world data from the UK to do with vaccine effectiveness.

Some people might hear the model's predictions and be motivated to get a jab, while others might be scared. The alternative message was reassurance: "This is what we can achieve if we vaccinate."

National's Covid-19 spokesman, Chris Bishop, said the modelling made it clear the vaccination rate needed to go as high and as fast as possible.

With the 12-15 age group the last to become eligible, Bishop said to boost the overall rates the Government should be rapidly investigating how to start vaccinating in schools.

Currently just 9 per cent of those aged 12 to 19 are fully vaccinated, compared with the overall rate of 40 per cent.

"We should be planning mass vaccination clinics in our schools before the end of the year," Bishop said.

"Every extra person adds to that overall rate."

On consent issues, Bishop said it should be no different than other vaccinations that have occurred in schools.

The Government has not signalled any intention to roll out vaccinations in schools this year. 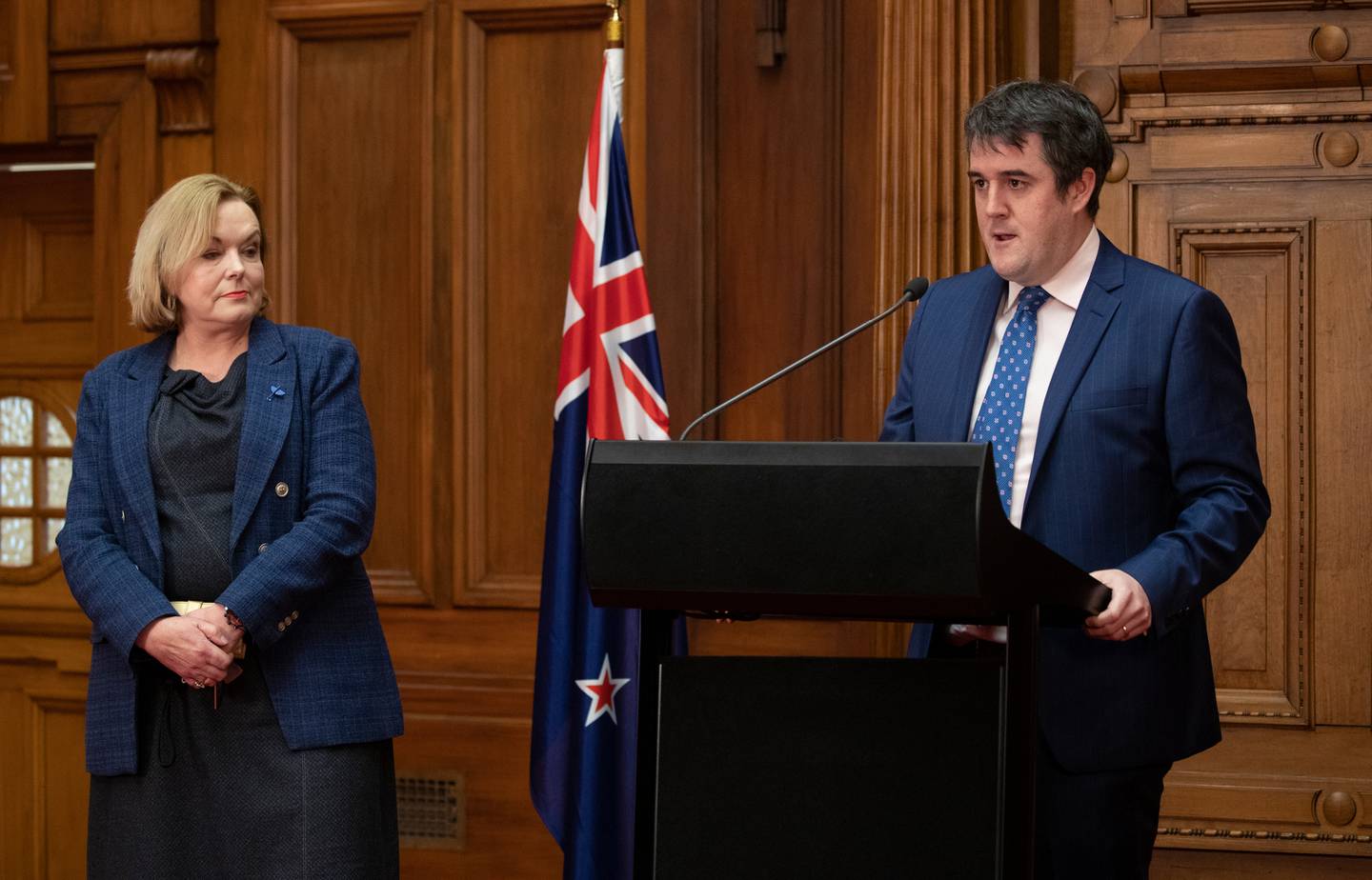 The modelling, by Professor Shaun Hendy and Te Pūnaha Matatini researchers, suggests that vaccinations alone won't be enough to keep the virus at bay and public health measures would still be needed.

With the Pfizer vaccine expected to be approved soon for use in children aged 5 to 11, the modelling found this could lift overall coverage as high as 90 per cent – the threshold at the centre of a new Herald campaign.

The modelling from Hendy came with troubling figures around what could happen if vaccine uptake – around 40 per cent of eligible people have so far received both doses, and 35 per cent one dose only – fell lower than 90 per cent of those aged over 5, or about 85 per cent of the total population.

Even at 80 per cent coverage of over 5s, and assuming only baseline public health measures and limited test-trace-isolate-quarantine, the modelling carried a median estimate of 1.1 million infections, around 60,000 hospitalisations and nearly 7000 deaths – all within just a year.

The picture changed again when the modellers assumed that full test-trace-isolate-quarantine measures were possible, along with baseline public health measures.

In this case, median estimates showed that vaccinating 90 per cent of over 5s could keep infection totals as low as around 13,000 – with around 470 hospitalisations and just 50 deaths.

The modelling has faced some scrutiny, with modeller Rodney Jones telling Newstalk ZB the numbers were "overcooked" and didn't factor in enough of the health restrictions that would likely be in place.

"Going with sensational numbers is not helpful, we need hope, start the process with a realistic assessment."

Jones compared the situation with Singapore, with a similar population and where restrictions had been loosened with full vaccination rates around 80 per cent, and 11 deaths in the past month.

Hendy defended the modelling, saying it was specific to New Zealand's own health risks and health system. 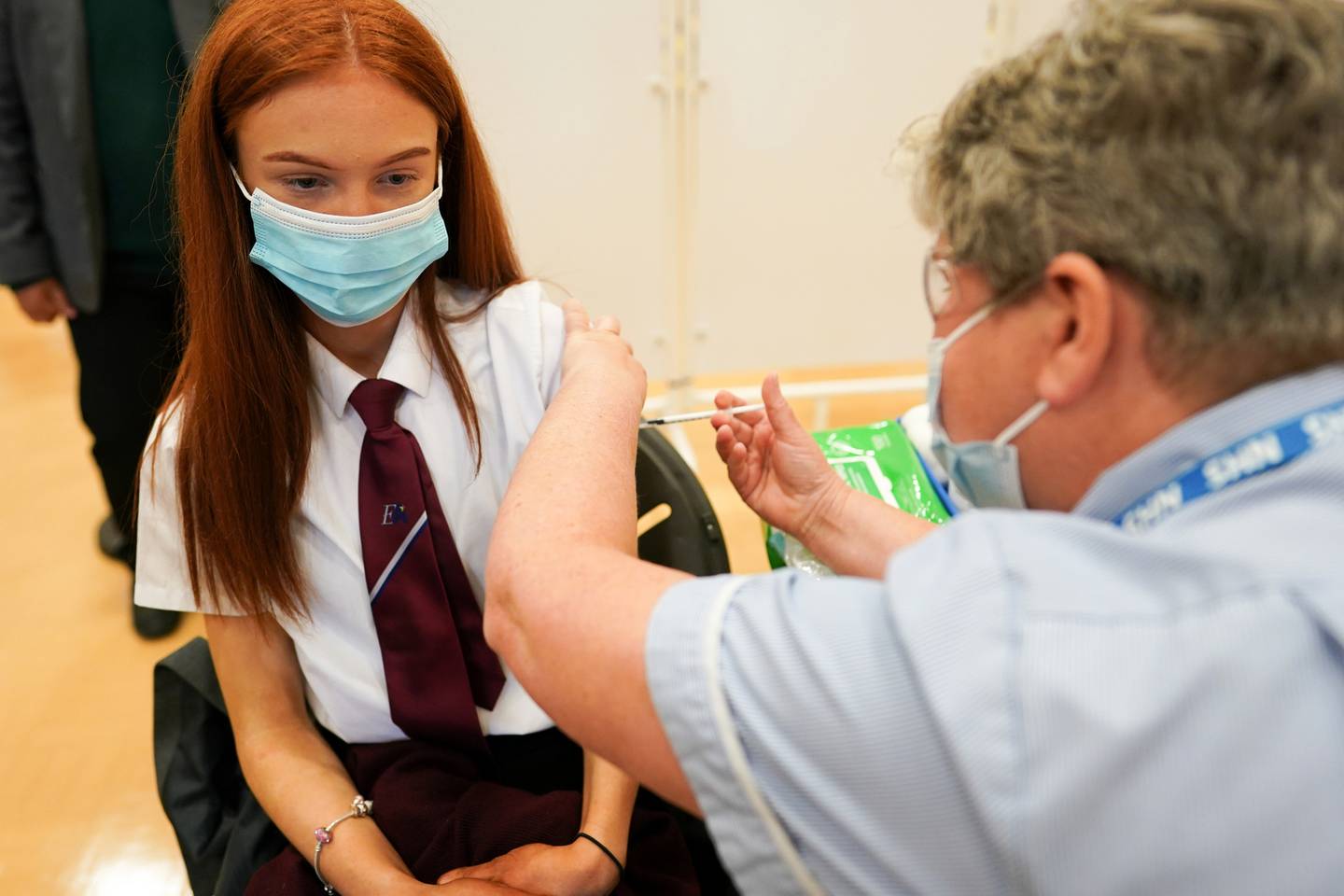 Britain is immunising children aged 12 to 15 to slow disruptions to education. There is no sign of plans to introduce vaccinations in schools here. Photo / Getty Images

For example Singapore has about three times the amount of intensive care unit (ICU) beds per capita.

Singapore had also been at a form of level 2 restrictions, or higher.

"These [higher numbers] are long-term predictions based on completely opening up and not using adequate health measures. Singapore had to put restrictions in, stronger than we are talking about [in our models]."

Hendy said it was also difficult to compare with Britain, where they were implementing a high level of extra health measures and there was a level of natural immunity in the community due to how long the virus had been present.

Immunologist Graham Le Gros told the AM Show that Hendy's modelling was a projection and we didn't really know how the virus would impact in a vaccinated community.

Le Gros said based on the way the virus was being managed overseas in vaccinated communities this gave us an idea what it could look like.

He said we didn't know how it would work in New Zealand as we couldn't really compare ourselves with other countries. For example, we didn't have mass transport systems as in Singapore.

He said vaccine trials were looking positive for children.

This would give us an opportunity to get rates up to 95 per cent coverage.

He said while parents were always worried about what went into our children Delta was so potent it was necessary to guard against the ravages of the virus.

Māori and Pasifika people appeared to be particularly susceptible to Covid, there were many ways to deal with protecting against the virus including anti-body therapies.

He believed that New Zealand could get to 95 per cent vaccination coverage and lead the world.49,677 doses on Wednesday, September 22

"It's possible to take a more optimistic approach, in particular looking at countries like Denmark that have more realistic and achievable levels of vaccination."

The idea of a 90 per cent target has also drawn renewed calls for a focus on equity.

The vaccine rollout has implicitly prioritised European/Other ethnicity through age prioritisation, meaning rates of fully vaccinated Māori and Pasifika are 40 per cent and 16 per cent respectively behind the overall rate.

Meanwhile modelling on the initial Covid variant found that at a population level Māori could be twice as likely to die from the virus, and were more likely to catch it.

Further research released in July, by Te Pūnaha Matatini, found Māori and Pasifika were twice as likely as Asian people and New Zealand European/Other to be hospitalised from Covid-19.

Even after factoring in underlying health conditions, Māori and Pasifika were at the same risk of hospitalisation 20 and 25 years earlier respectively than Pākehā.

Public health expert Dr Rhys Jones said all decisions should be based on how they impact on the most seriously affected groups.

"For example, any moves to 'open up' while we still have very low vaccine coverage among Māori communities would be not just unethical, but genocidal," Jones said.

"There absolutely needs to be a commitment from the Government that it would not scale back restrictions until high-risk populations are as fully vaccinated as possible.

"That means Māori, Pasifika, disabled people, and others – all of these groups must have as close to 100 per cent vaccine coverage as possible before any loosening of restrictions could be considered."

Māori health researcher Dr Rawiri Taonui says that a 90 per cent vaccination rate is the best-case scenario and means less risk for Māori.

But the 50 estimated deaths per year, with 90 per cent of the population vaccinated, would highly likely be a large proportion of Māori, Taonui told TVNZ's Breakfast programme.

Speaking about young children - aged 5 to 12 years old - getting the vaccine, he said it was important we make sure it was safe for them to get it in the first place.

What experts do know at this stage, is that the Pfizer vaccine produced "really good results" for those young people aged 12 to 19 years old.

The Delta variant is impacting young people around the world more than other variants, he said.

"One of the features of Delta is there's a higher rate of long-term effects - what they call long Covid - in young people."

That presented a "huge" risk to the Māori and Pacific communities in this current outbreak in particular, he said, who had been heavily impacted in the Auckland outbreak.

Taonui said there continues to be low trust associated with the Government system among Māori.

He acknowledged that was an issue that may be affecting low vaccination rates among Māori.

But he said it is important for the vaccines to be taken into the communities so people felt safe to get it together with their community or whānau - rather than expecting people to turn up to vaccination clinics individually.

"Roll it out to the whānau," Taonui said.

Prime Minister Jacinda Ardern said reaching a high vaccination rate meant across all ages, towns and cities and ethnicities, all as a means to break chains of transmission.

She described the modelling and ability to reduce restrictions at higher levels of vaccination as a hopeful future with the aim to become the most vaccinated population in the globe.

"Here is our chance to lead the world again," she said.

"Get vaccinated. It's the reason we should all feel hopeful."

Meanwhile, 15 new Covid-19 cases in Auckland were reported on Thursday, the second day the city has spent at alert level 3. Two of these were unlinked cases.

These doses are in addition to our existing donation of 1.668 million AstraZeneca doses to Covax, announced earlier in the year.

Getting nurses to NZ

Capacity had not increased in the last 18 months, he said. There were now 550 ICU beds which would be enough if the population was highly vaccinated.

That needed to be over 95 per cent vaccination. "We haven't got our heads around 95 per cent but we're going to have to."

He was heartened to see Pfizer's vaccine had been extended to younger age groups - he would be first in line to get his own children vaccinated.

ICU nurses are not on New Zealander's critical skills shortage list. Their visas did not let them through any faster than anyone else, and it was difficult to bring their families with them.

Decent ICU capacity meant people were less likely to die - but he was not a modelling specialist. "What has been critical - because we've not been able to control the Delta in the community - is we've had the vaccination rates rapidly increase."

Delta was like a wave - the way to decrease the size of the wave was vaccination and following public health rules. THat meant there would not be too many patients coming in to meet ICU capacity