There were hysterical scenes at Auckland Airport yesterday after 11 passengers were removed from an overloaded Air New Zealand flight to Brisbane before take-off and placed in quarantine until the next flight on Tuesday.

Police were called to the Customs hall after the passengers became angry when Air New Zealand told them they would have to pay for their accommodation, meals and other costs in quarantine.

Desiraye Solomon and her daughter, Delia Brown, were on the flight returning to the Gold Coast after visiting her father in Wellington who had suffered a heart attack.

They offered to get off the full flight after the captain advised passengers it was overweight and off-balance, but other passengers were randomly picked off a list, she said.

Solomon said other passengers told they had to leave included an elderly woman, another mother and daughter, a mother with a young child and a group of four male teenagers.

"Someone else came off the plane and she was hysterical and screaming and carrying on. Apparently her mother had died and she was going to the funeral. They let her back on.

"When we first got off the plane they told us we could ring our family to come and pick us up. The elderly lady was very distressed and crying," Solomon said.

Once the passengers got to the Customs hall, she said, a Customs officer turned up and took people's temperatures.

"Then someone came around and said 'what hotel would you like?' and we were like 'what do you mean?' and they said 'you will have to quarantine'. Then we were all yelling and carrying on and the police were called," Solomon said. 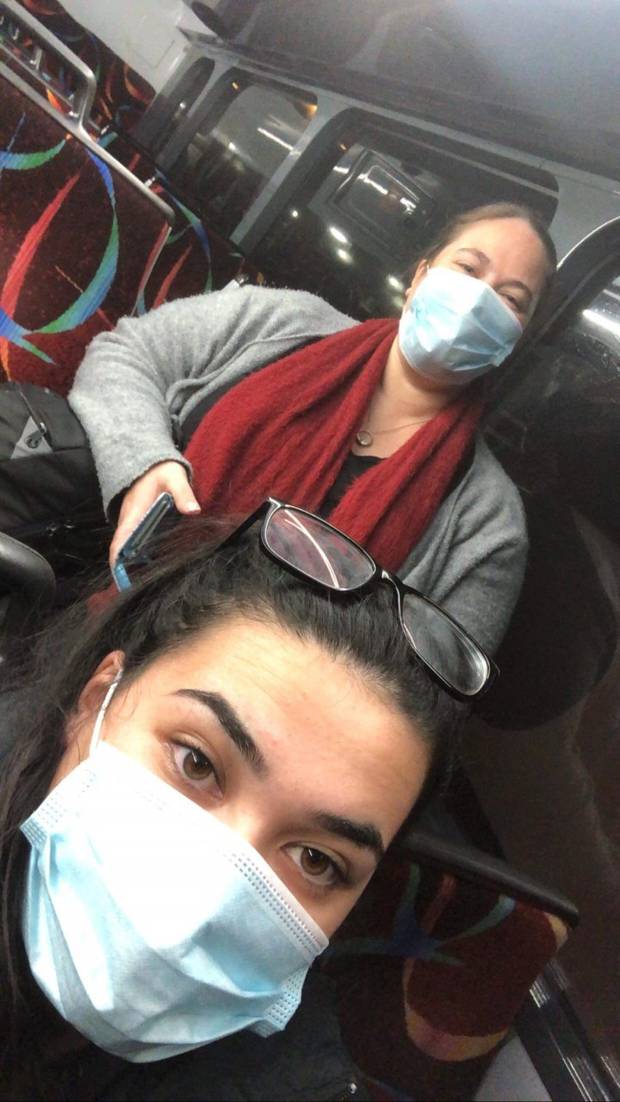 Desiraye Solomon and daughter Délia Brown on the bus to theIr hotel to begin quarantine yesterday. Photo / Supplied

She said the police were liaising between the passengers and Air NZ who were "hiding behind the corner because they didn't want to deal with the hostility".

Passengers were then given an Air New Zealand letter signed by an unnamed "airport manager" saying they would have to pay for quarantine accommodation and book their own flights.

Solomon said she was so angry she started yelling at Air New Zealand staff, who then gave passengers a second letter, which made no mention of the passengers paying for quarantine.

Air New Zealand today apologised to the passengers for the inconvenience and said they were given wrong information about quarantine when they disembarked.

Solomon said a police officer told the passengers they had to go into quarantine because Americans in transit were on the plane to Brisbane.

She said Air New Zealand's handling of the situation was "pathetic and rude", saying she was irate and annoyed that passengers were first told their families could come and get them and then told that wasn't possible.

"I was p***d off that we had to quarantine but once the police said there were Americans on the flight I said 'of course, we are going to have to quarantine'. That's fine. We are not trying to start a pandemic," Solomon said.

Unfortunately, she said, the affected customers were inadvertently provided a letter with incorrect information when they disembarked.

"Once our airport team realised the mistake, they regathered the passengers, apologised and provided our standard offload letter, which lets our customers know they have been rebooked on an alternative service and that the letter may be used to claim on travel insurance if required," Fraser said.

An Air New Zealand spokeswoman said when removing passengers from a flight the airline had a standard process which took into account a number of factors, including ticket type and loyalty level.

The Herald is seeking comment from the police and the All of Government Response Group overseeing Covid matters at the border.