An anti-lockdown protester who last went viral when she challenged police over playground lockdowns is back, this time creating a scene at a suburban grocery shop over our national mask mandate.

Video shared online shows a confrontation between the woman and a staff member at the Four Square store in the Auckland suburb of Torbay on Tuesday afternoon.

Approached by a worker for not wearing a mask, the woman films as she begins to berate him for enforcing the rule.

"Please stand two metres back," she demands, asking the workers to "follow your own rules". 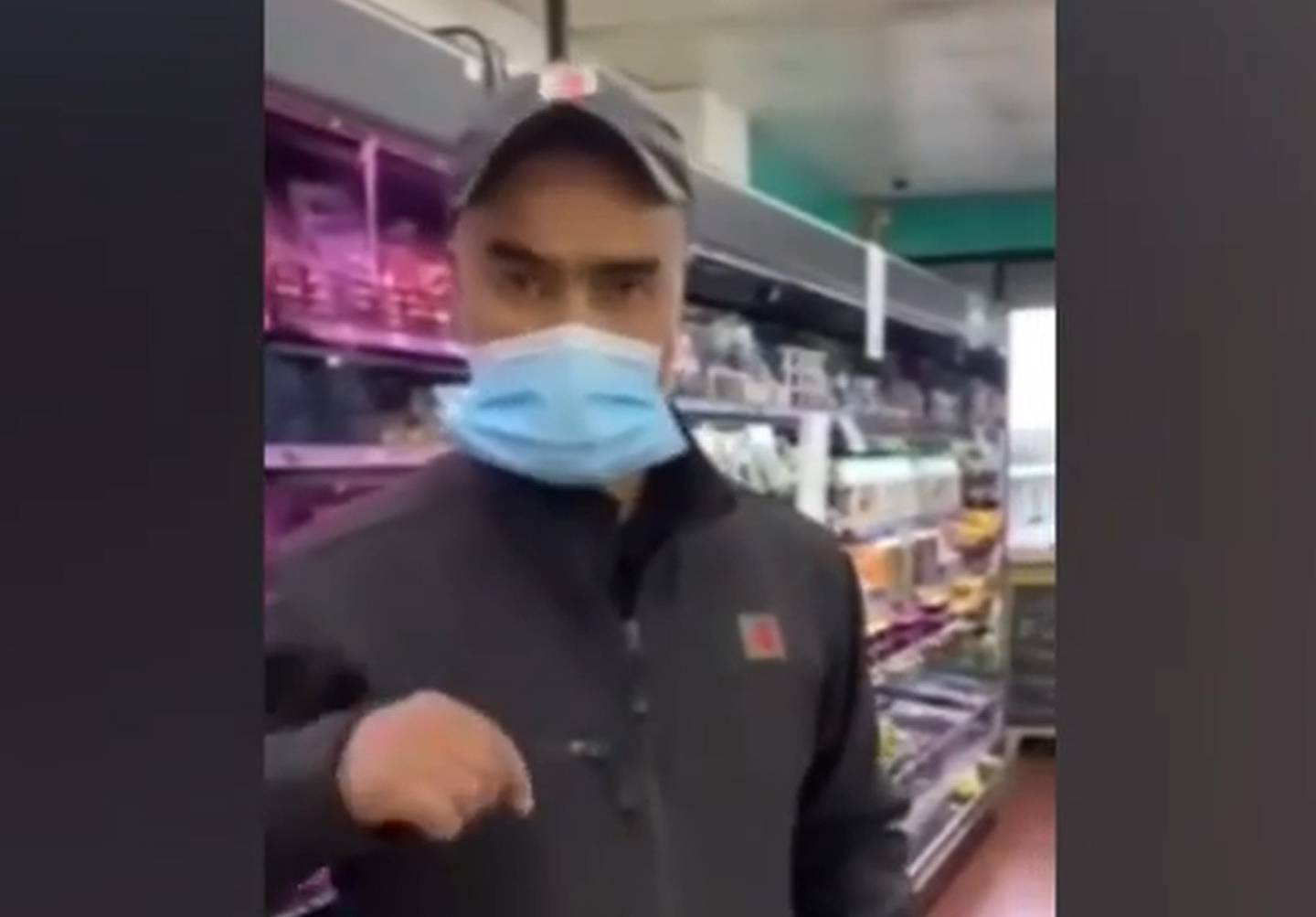 The worker has been praised for his calm response. Photo / Supplied

When one worker asks to see her medical exemption from wearing a mask, the woman refuses.

"I don't need to give you any information, other than the fact that I'm medically exempt."

When he asserts that Government policy is that everyone must wear a mask when accessing essential services she accuses of him of breaking the law by refusing her service.

"I'm not breaking the law," the man responds. "This is my shop and this is my duty for the safety of other customers."

She then claims she cannot print out her exemption because she does not have a printer and the library is closed.

Pressed by the worker to show a digital copy on her phone, she agrees but then continues to argue and is asked to leave.

"Please, please," the worker repeats as she continues to claim a legal defence for her behaviour and urges him to call police to settle the matter.

Another customer then calls out: "Just wear a mask".

The irate anti-masker responds by describing her as "another Nazi" and a "little Gestapo helper".

The protester hit the headlines this year when she argued with police officers attempting to remove her and her children from a playground in level 3 lockdown.

She shared video online showing the confrontation, during which she challenged an officer with: "Choose your side, buddy. Freedom or communism."

Locals praised the calm response of the workers, taking to social media to commend their response and express their dismay over the actions of the anti-masker.

"I support the lovely staff of 4 Square," one woman wrote. "They work hard and long hours, and are always so polite."

"Be kind and respectful when entering 'their shop' and if you can't do what they or any shop will ask of you, then don't go shopping.

"Ask someone you know who will wear a mask and do the shop for you."

A local who was in the shop at the same time said she felt for the workers and said they were "looking out for all of us".

"Her behaviour was so disturbing," the woman wrote.

"Filming us and accusing us of being 'Nazis' when we pointed out that she needs to wear a mask under lockdown when doing groceries. After witnessing that I've so much more respect for our incredible essential workers who put themselves at risk on so many levels."

"She is well known in the community for this intimidating behaviour. There would have been no way she would listened to the staff," another local wrote.

"Good on them for sticking to their guns and trying to enforce the rules."

Inspector Stefan Sagar, area commander for Waitematā East, confirmed to the Herald that police were called.

"A woman in the store had reportedly become verbally abusive towards staff and other customers at the store after refusing to wear a face covering," Sagar said.

"Police attended the store shortly afterward, but the woman had already left the area.
Police will be making further inquiries into the matter including reviewing CCTV footage."

"Generally speaking police will be taking an education-first approach around the requirement to wear a mask at essential services, such as supermarkets.

"However, we would like to remind people that enforcement action will be taken where necessary for the safety of everyone."

Under level 4 rules, staff and customers must wear masks at essential services, such as supermarkets, pharmacies, dairies and service stations.

New Zealanders must also wear masks at bus terminals and in taxis.

Police Commissioner Andrew Coster has said police could issue infringements to those not wearing a mask.

"We know that with Delta, the risks are higher, so we've leaned towards enforcement more than we did with the earlier lockdowns, and we will monitor how that's going," Coster said last week.