Listen to the latest updates and experts live on Newstalk ZB

Three new Delta cases have been confirmed since the 1pm press conference, the Government has confirmed - and there are 19 new locations of interest in Auckland including several supermarkets.

And an AUT student is among the now 10 confirmed Delta community cases - the student was in a lecture theatre with 84 other students while infectious yesterday.

"[Auckland Regional Public Health] information indicates that the student was at a Social Institutions (SOSC 583) lecture in WG403 at the City Campus between 11.30 and 1pm yesterday (17 August) and was infectious at the time," said AUT vice chancellor Derek McCormack, in an email to staff.

"We have identified there were 84 other people in attendance at the lecture.

"While this is not yet a complete picture, we are working closely with ARPHS and will provide more information as soon as we get it. You will be contacted if you are identified as a close contact and provided with information about isolating and getting tested."

Prime Minister Jacinda Ardern and director general of health Ashley Bloomfield announced at 1pm that there were two further community cases of Covid-19, bringing the total to seven.

But Covid-19 Minister Chris Hipkins confirmed on RNZ Checkpoint just after 5pm that there were several new Covid-19 cases confirmed since the press conference - and the Prime Minister's Office said later it was three new cases.

"We're seeing more cases coming through, I don't have details of those cases. But yes, I can confirm that we have further positive test results since the press conference today," said Hipkins.

Hipkins also said it was "almost certain" the 58-year-old Devonport man is not the index case connected to the border.

"Almost certain they were given Covid-19 by someone else. What we're trying to do is identify how many steps in that chain of transmission there are before we got to the Devonport case."

Hipkins said there were several ways the Delta strain could have entered the community including through MIQ, someone could have jumped the border by travelling from NSW to another Australian state and then flying back. "We're not ruling anything out."

The number of locations of interest in Auckland has grown by 19, to 21, with a number of North Shore supermarkets and CBD eateries and bars added to the growing list.

Meanwhile, a top Covid-19 modeller says New Zealanders should prepare for an outbreak already with a median size of 90 to 100 cases - with the possibility the virus has been quietly spreading for weeks.

Genome sequencing confirmed the outbreak is the Delta strain of the virus, and it originated from New South Wales' major flare-up.

Contact tracers and ESR experts are racing to confirm the extent of community transmission after the community cases were identified yesterday, plunging the country into lockdown.

Auckland City Hospital took immediate action to shut down any potential spread after a fully vaccinated nurse was infected who had been working on a ward in recent days.

Long queues of cars inundated testing stations and supermarkets have reported panic buying as people stock up on essential supplies.

The Northcote testing site had lengthy queues. Many people in line arrived before the centre was open and have been waiting around three hours. Others further down Lake Rd will likely be waiting longer unless testing speed increases. 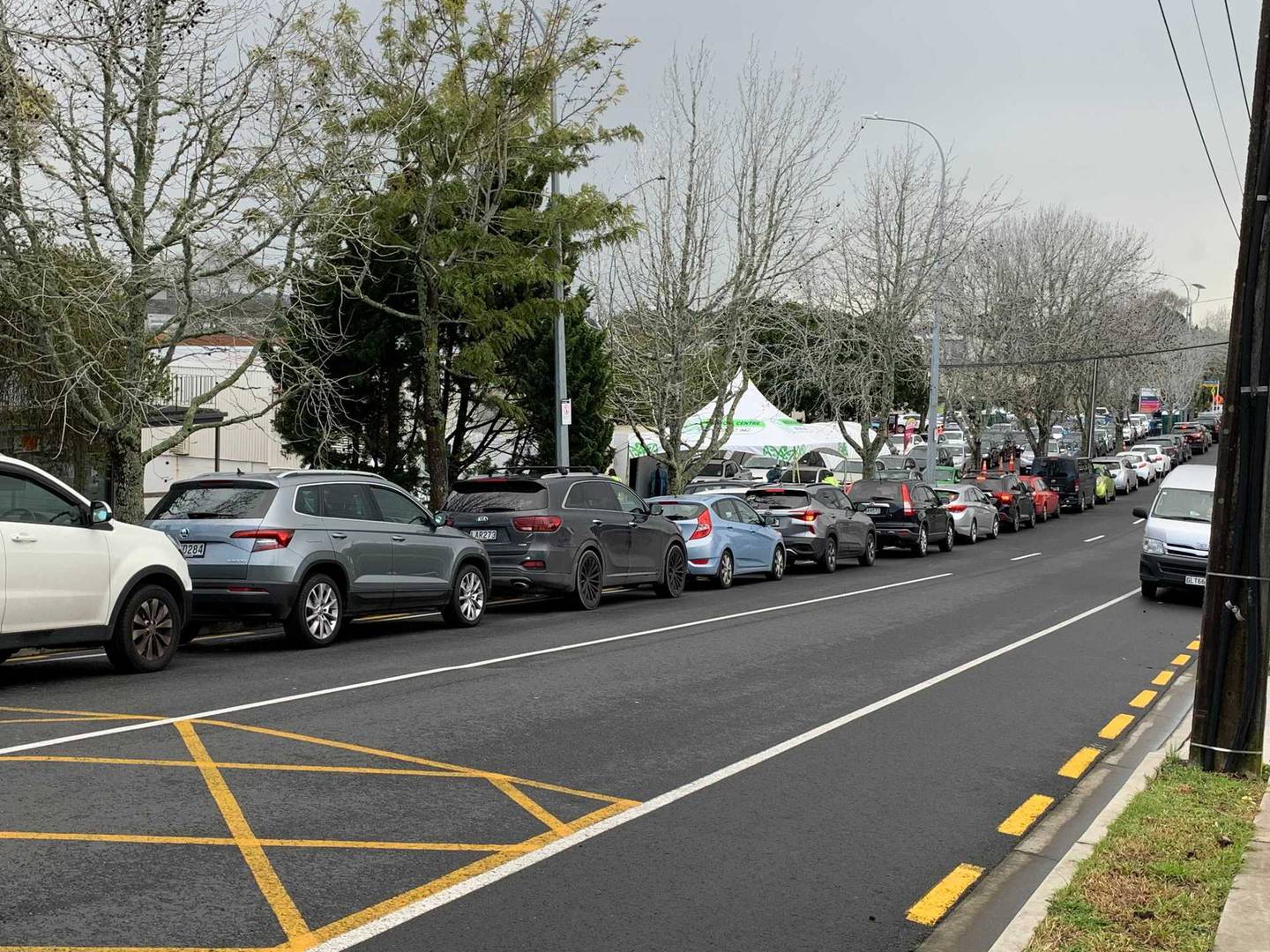 The queue for Covid tests in Northcote this morning. Photo / Adam Pearse

Prime Minister Jacinda Ardern confirmed today that five community cases of Covid have now been identified - all the highly infectious Delta strain - with no obvious link to the border or MIQ.

The first, a 58-year-old Devonport man was confirmed yesterday, sending the country into a snap alert level 4 lockdown.

Ardern said the man was a "tradesperson" and, as well as 15 locations of interest already announced, seven other locations he has visited were private homes.

A co-worker of the man has since tested positive along with three close contacts of the co-worker. 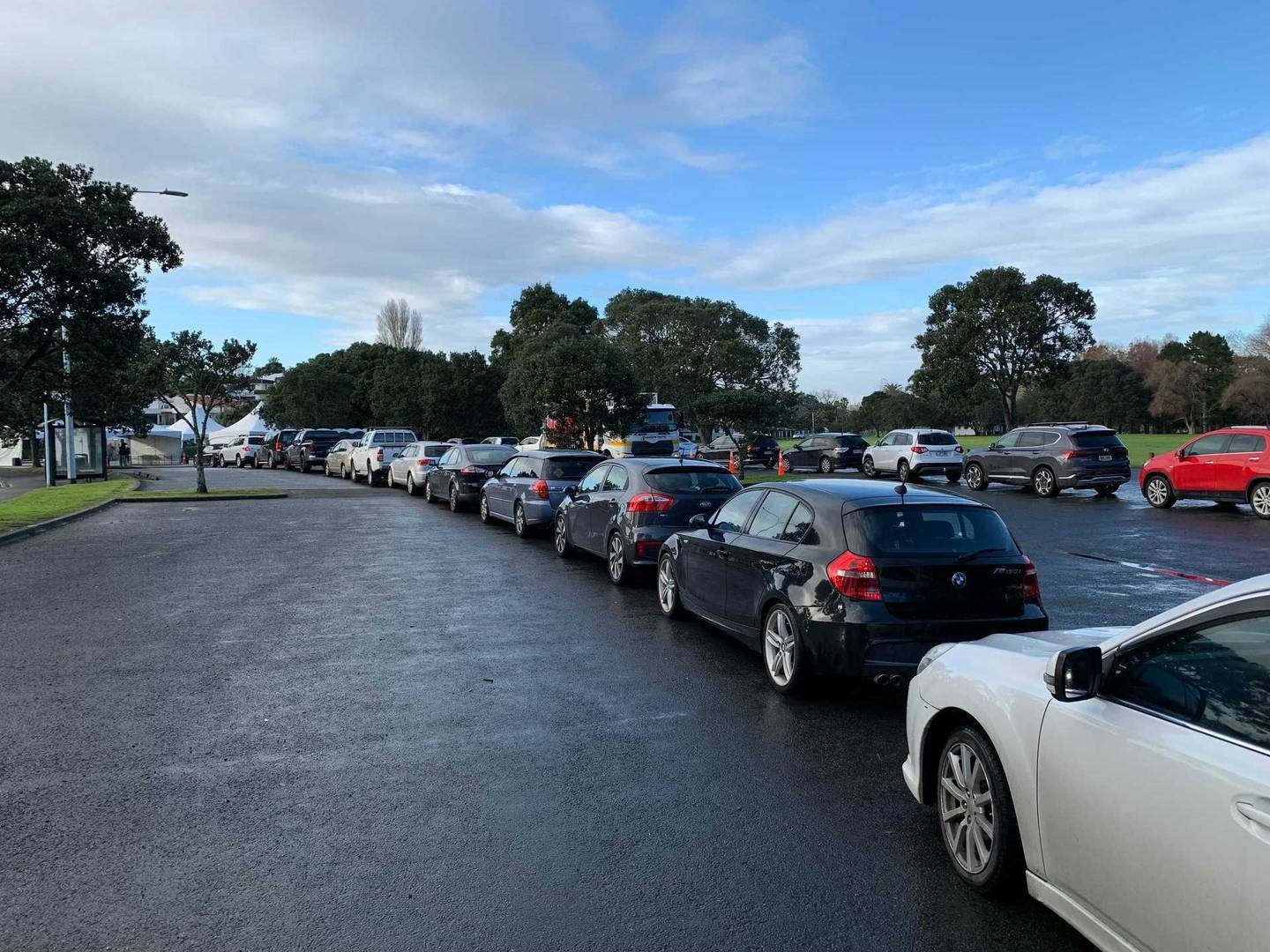 One is the Auckland Hospital nurse, which has sparked emergency measures at Auckland District Health Board to contain any potential hospital outbreak to protect staff and patients.

An email sent to staff says the DHB is concerned about a "hospital outbreak" and it is taking "a number of precautions".

Detailed contact tracing was under way and anyone who had been on Ward 65 in the past five days was asked to get a Covid test.

"Auckland City Hospital has taken immediate actions to shut down any potential spread," the Ministry of Health said.

"Those actions include stopping unnecessary movements between wards, testing all staff and patients on the ward the health professional worked on and standing down, testing and isolating staff on the same ward." 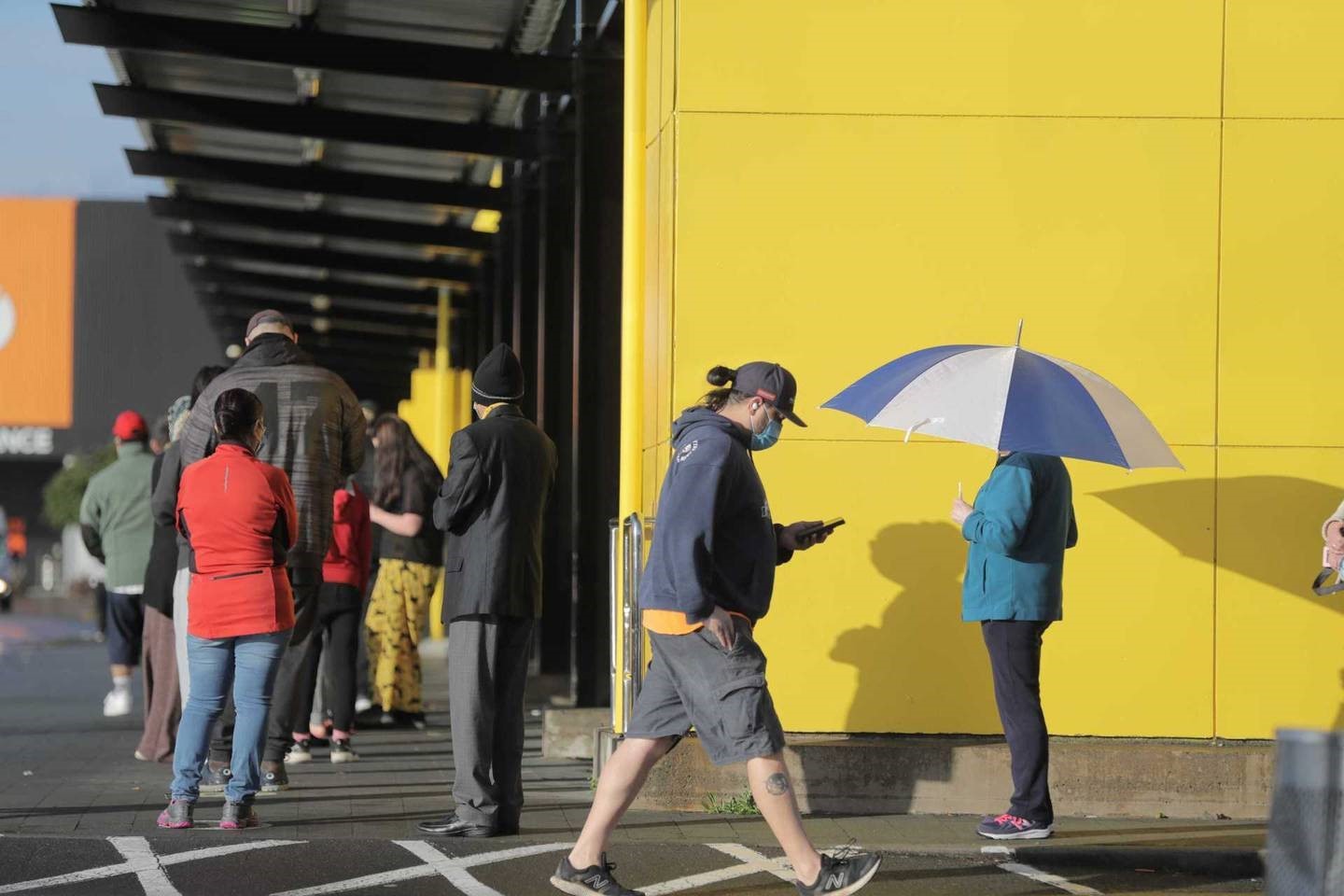 Covid-19 Response Minister Chris Hipkins said contact tracers were working at speed to identify the chain of transmission, where the virus came from and where it had spread to.

"We know it's the delta variant we're dealing with. We don't yet know where the linkage may be."

Experts were now going through New Zealand and Australian genome sequencing databases in a bid to identify where the infection had originated.

Meanwhile, there have been reports of Aucklanders fleeing the city last night after the lockdown was announced.

Concerned residents blocked State Highway 25 at Manaia, on the Coromandel Peninsula late last night after news that the infected Devonport man and his wife had travelled to Coromandel town on Friday.

Locals were asking anyone using the road for their essential workers certificate or proof of residence to get through, sparking tense scenes.

A resident posted on a Facebook page that traffic flow towards Manaia "has slowed right down".

"Manaia bridge is still closed and will be for as long as it takes to secure our community's health," the resident wrote this morning.

One of the Auckland locations of interest identified by health authorities is opening its doors today. The Devonport pharmacy is open and staff are serving people. A staff member told the Herald they were too busy to comment.

There was no signs that the pharmacy was a location of interest.

The pharmacy told customers on a Facebook post this morning that it would be opening according to alert level 4 guidelines.

The post said four of the pharmacy's staff members are in isolation for 14 days after the infected Devonport man visited the chemist on Monday afternoon.

"We appreciate your help, patience and understanding during short-staffed two weeks period.

"Please stay home if feeling unwell and call / email us instead."

Deputy Prime Minister Grant Robertson told Newstalk ZB's Mike Hosking there was no known link with the Covid-positive UN worker who was recently flown to New Zealand from Fiji in a medevac transfer.

Robertson said the vaccination programme was on a "brief pause" while the Government handled the immediate impact of the new cases. Arden said vaccine centres should reopen in less than 48 hours.

Robertson said the cost of a week-long lockdown was up to $1.5 billion. "Overall this is still the best economic response."

The Reserve Bank's OCR announcement would still go ahead today.

Ardern told TVNZ all wastewater tests were clear except for the closest one to the Jet Park MIQ facility in Auckland. More wastewater testing would be carried out in the Coromandel.

"My very simple message: please stay at home," the Prime Minister appealed to the nation this morning. "Stick to your bubble, stay home."

Ardern said the Government's hope was a high number of people being vaccinated, along with other public health measures such as contact tracing, would reduce the number of lockdowns going forward.

She was confident New Zealand could beat Covid again by using the same tools it had used before, as long as everyone adhered to the rules. Her final message: "Stay safe everyone."