A 17-year-old girl has been left shaken after she was egged by aggressive members of the anti-mandate protest convoy.

The teen, who the Herald has chosen not to name, was walking to New World in the Wellington suburb of Thorndon when she was met by a group of protesters near Parliament.

As she was walking to get some food, a car-load of protesters hurled abuse at her for wearing a mask, demanding she take it off and not comply with Covid-19 rules.

After choosing to ignore them, they then threw raw eggs at her while continuing to hurl abuse.

The incident left her shaken and her father furious.

"As she was walking a bunch of them in a car started abusing her for wearing a mask and telling her to take it off," he told the Herald.

"She ignored them and went to walk across the road and they threw a couple of eggs at her.

"She was pretty traumatised and got a bit of a fright from the eggs and the abuse. She was most upset about having things thrown at her." 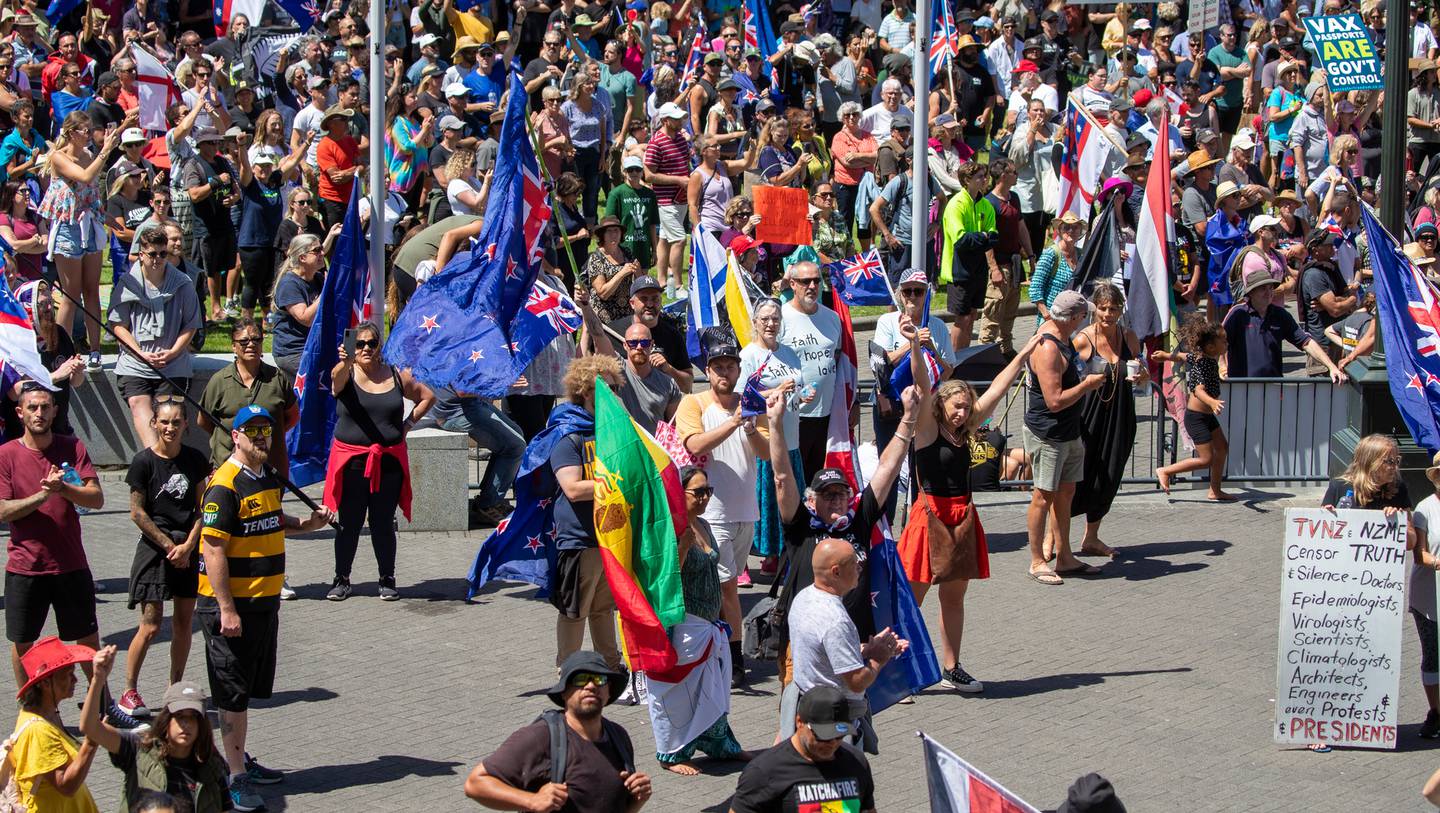 It is also alleged another member of the convoy was preaching outside New World "pestering people, saying they shouldn't be vaccinated".

Frightened by the ordeal, the 17-year-old then called her father and asked to be picked up from work, feeling unsafe and fearing she would be targeted again.

"It wasn't a pleasant experience.

"She's 17. To walk in a place she's walked in for five or six years and felt safe to be in, and all of a sudden being confronted with that [angry protesters] is just not on.

"We all want our daughters to be safe."

Her father told the Herald that while the anti-vaccine mandate protesters have a right to be heard, the group who attacked his daughter went against the very reason they are protesting for - freedom of choice.

"It's quite simple really, they have the right to not wear a mask if they don't want to, but my daughter was wearing a mask not because the Government told her to do but because our whanau believe it's the right thing to do for people in the community to keep us healthy.

"That's the choice we made, it's part of the freedom some of these people talk about."

He says Wellington, and the Beehive has been the location for a number of protests in the past, but that this is the first time he and his family have felt unsafe.

"I haven't felt any anger or lack of safety with any other protests until the anti-vaxxers have come into Wellington. And they seem really really angry. The ones that have come in this time have taken it to another level." A protester speaks to police outside Parliament. Photo / Mark Mitchell

He says the difference with the current convoy is they appear to be protesting about different points and have no unified direction or voice.

"If you're going to protest and you want to win people over to your point of view, that's not the way [egging innocent people] to go about it.

"There seems to be a whole bunch of misaligned kaupapa [principle or policy]. These are people that would never usually get together and there is a range of behaviours.

"Some of them are making their point peacefully. But some are there just to cause trouble and that's what worries me.

"Those that are genuinely concerned about a vaccine mandate are being drowned out.

"We've got Trump people there ... And the consequence is erratic behaviour and no unified [idea]."

The Prime Minister says while she is concerned about misinformation running through a protest group outside Parliament, their right to be there is "a part of New Zealand".

Speaking to Jamie Mackay on The Country, Jacinda Ardern said while the gathering billed itself as against vaccine mandates there was a "range of perspectives", including those who were against vaccines entirely.

Ardern said while vocal it was "not a large group".

"I've seen a range of protests over my time and this is certainly not large in scale. And not representative of the vast majority of New Zealanders."

The Herald today also viewed a vast array of concerns, from people who lost their jobs over the mandates to misinformation about vaccines and natural immunity, along with protests about Oranga Tamariki and even about saving Marsden Point near Whangārei.

At least 100 police officers greeted protesters today, many of whom had camped overnight at Parliament after travelling across the country in convoy to protest against vaccine mandates and the Government's response to the Covid-19 pandemic.

Mid-morning the organisers were issued a trespass notice by Parliament security accompanied by police. 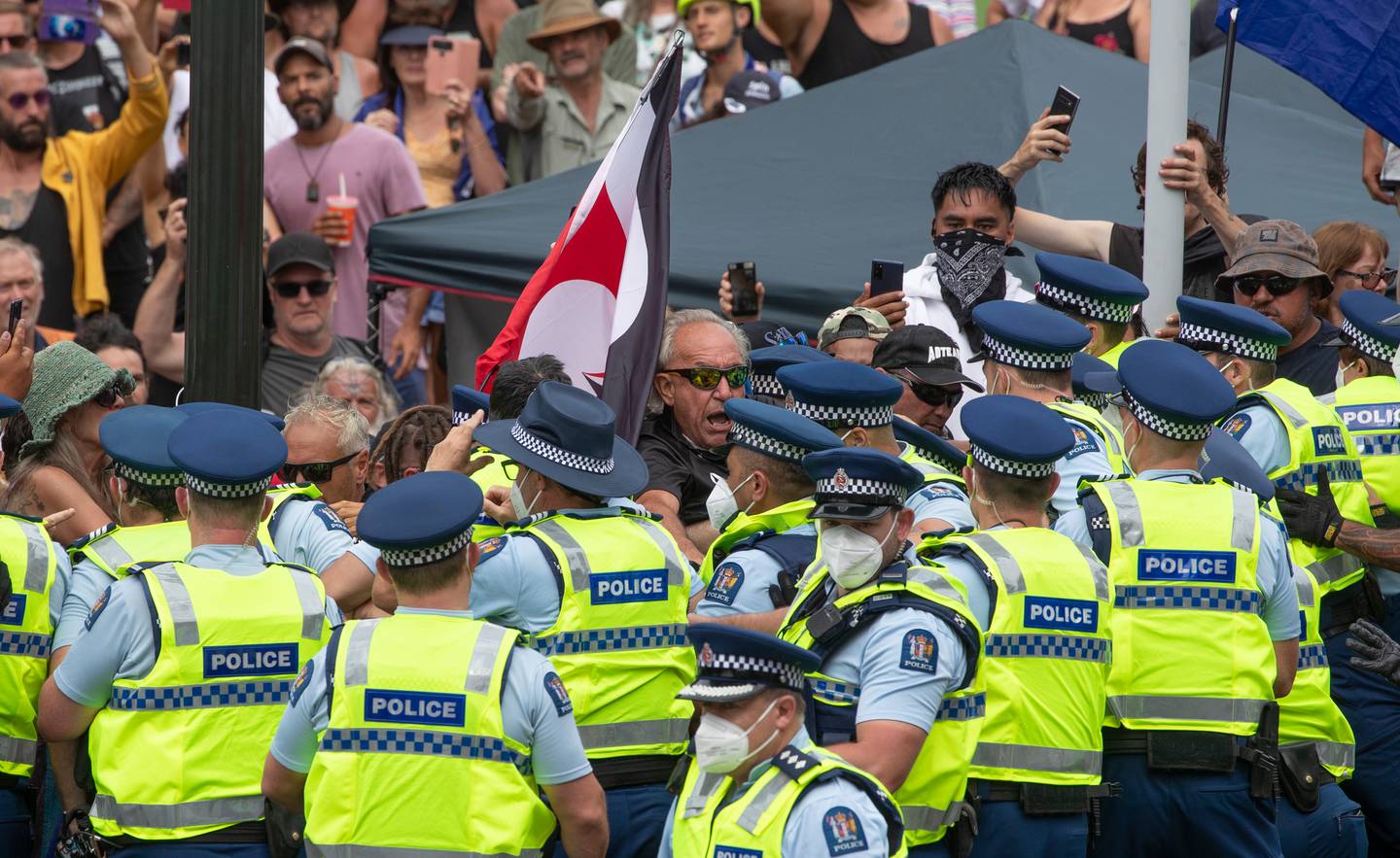 But this afternoon the largely peaceful protesters tried to breach the gates of Parliament, prompting a wall of police to make arrests.

Protesters attempted to move onto the forecourt at Parliament. Police formed a line and pushed the protesters back.

Footage taken from the gates of Parliament show a number of police officers joining fellow officers at the fence between protesters and Parliament. Moments later officers held back protesters as they attempted to get through.

A protest organiser urged protesters to remain calm and not to resist arrest.

At least two people were put in handcuffs and led away by police.

One person broke through the barricade and was tackled to the ground by police.