The high cost of getting professional help for ill or injured pets is driving people to try their own home surgeries.

The SPCA's annual "List of Shame" was released earlier this week, revealing 12 of the most horrific cases of animal abuse from the past year.

A dog named Spencer had his tail docked by his owner using bands when he was four months old.

The bands did not cut the tail cleanly and the skin shrunk, exposing 3cm of raw flesh. The tail bone was visible.

"With pain relief and treatment, he healed well and was eventually adopted to a really great family.

"For me this case really highlighted how people who have been doing this a particular way all their lives and think they know what they are doing, can still cause a great amount of pain and suffering to their animals. This was a terrible situation that an animal should never be subjected to.

"This case was special as the owner received an indefinite disqualification, meaning he will need to apply for the disqualification to be lifted instead of it automatically timing out. It felt fantastic that the courts recognised the pain and suffering that Spencer had gone through.

"A veterinary behaviourist noted that Spencer showed behaviours of 'learned helplessness' from being in prolonged pain that he could not get away from. He showed fearfulness and lack of confidence. Once recovered and adopted, he thrived."

The defendant received an indefinite disqualification from owning or exercising authority over animals and was sentenced to community work. 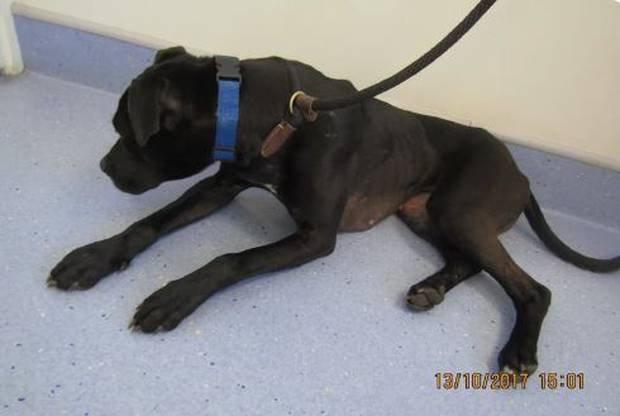 The owner of Bruiser used a staple gun in an attempt to repair her wound. Photo / SPCA

In another case, a dog named Bella had a wound on her snout, between her eye and nose
that was so deep you could see her skull.

Her owner had taken her to a vet once after the injury occurred but had not been able to provide the ongoing treatment she needed.

"I seized Bella and took her for urgent veterinary care," said SPCA inspector Sam. "She had a surgery to clean and close the wound.

"Then, while Bella was recovering in SPCA care, a report came in about a second dog named Bruiser from the same owner.

"Bruiser was scarred, had fresh and healing wounds all over her," said Sam.

"The defendant confirmed that Bruiser had been injured and he'd used a stapler on her wound – not seeking any vet care. So I seized her too.

"Bella and Bruiser thrived in SPCA care and were adopted to new families. The defendant was sentenced to a short term of imprisonment and disqualified from owning pets."

SPCA CEO Andrea Midgen says vet affordability is often the cause of acts like this.

She says people want to address an issue with their pet and take it into their own hands because they can't afford the treatment and care they need.

Midgen says often it's a lack of education, rather than malice driving people to these acts.

She says more education is needed to stop people attempting home surgeries on their pets.

She says SPCA inspectors around the country spend a lot of time educating people.
Meanwhile, vets are defending their charges.

He says the trouble is one of perception because human healthcare is subsidised.

McCullough is urging people to get health insurance for their pets because things can often happen unexpectedly.

He says pet insurance gives protection against that, and there are a number of very good companies that provide it.