The deaths of a woman and her two babies in a high-speed crash at a rural Canterbury intersection have sparked a major review of similar sections of road across the country in a bid to prevent future fatalities.

Chante Harmer, 30, died alongside her 19-month-old Te Awanuiarangi and 8-month-old Wysdom after their car collided with another vehicle near Ashburton in April 2019.

Harmer was driving two of her six children and other family members along Hepburns Rd and, after failing to give way at the intersection of Mitcham Rd, ploughed into an oncoming ute. 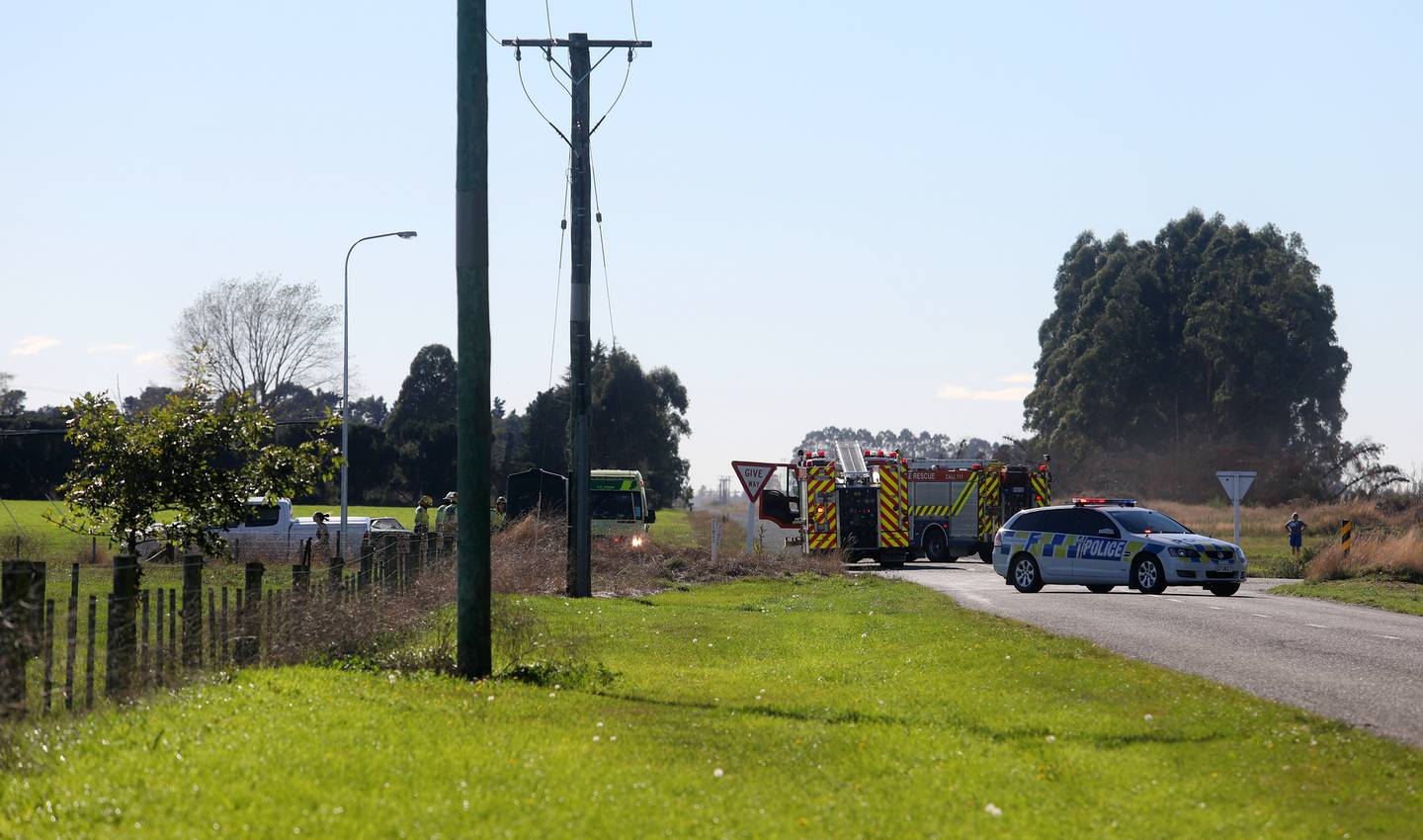 Chante Harmer failed to give way at an intersection and collided at speed with a ute. She died alongside her toddler and baby. Photo / Ashburton Guardian

Police investigated the crash and the matter was referred to Coroner Marcus Elliott who held an inquest last year.

At the inquest he heard details about the crash and the intersection where it happened from police, the Ashburton District Council and Waka Kotahi NZTA.

Coroner Elliott then had to formally establish the cause of the crash, whether the ADC – as the local road controlling authority – contributed to the crash and whether any recommendations were needed to reduce the chance of death occurring in similar circumstances.

At the inquest the coroner heard from police that the give way sign at the intersection Harmer was travelling towards was clearly visible from 120m away but could easily be missed from a distance as it "blended into the background of the Canterbury landscape".

The intersection itself had visibility issues for all drivers.

"Road signs and markings were not adequate to provide the safest environment possible for road users," the coroner was told.

Concrete irrigation culverts on both sides of the road, a tall hedge and a row of poplar trees also resulted in reduced visibility.

Coroner Elliott ruled the cause of the crash was due to the fact Harmer "did not obey the give way sign".

"I have concluded that the reason Ms Harmer did not give way was that she did not perceive either the give way sign, the intersection or [the] approaching vehicle in sufficient time to stop.

"Although the evidence showed that Ms Harmer did become aware of the approaching vehicle and then braked, this was much too late to prevent a collision."

He said given the signage was a causative factor in the crash he had to consider whether the ADC – as the road controlling authority responsible for the roads that intersected – "contributed to the collision". 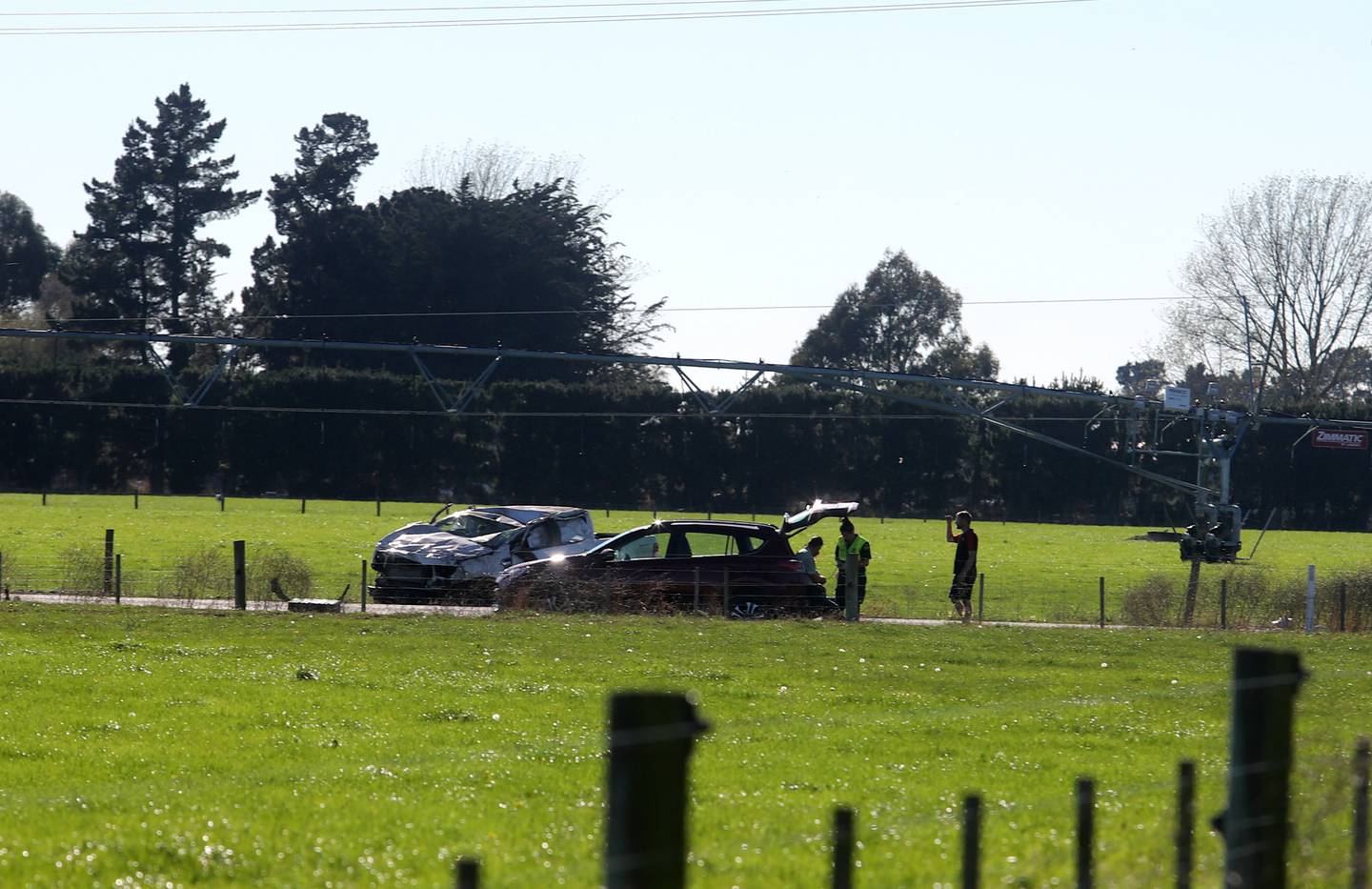 The scene of the crash near Ashburton. Photo / Ashburton Guardian

"However, this does not mean that the council can be said to have contributed to
the crash," he said.

"I have concluded that Ms Harmer did not see the give way sign. Even allowing for some difference in size, it is equally possible that she would not have seen a stop sign in the same spot ... and the crash would still have happened.

"Therefore, even though I have found that the council should have acted differently by erecting a stop sign at this intersection before the crash, this did not contribute to the crash."

The coroner heard that since the fatal crash, multiple stop signs – and warning signs further back along the road that a controlled stop was imminent – have been erected.

The council – along with property owners – had also worked to improve overall visibility at the intersection.

Coroner Elliott said given the circumstances of the crash there was a basis for him to make recommendations "directed to ensuring that motorists at this and similar intersections are given warning of the approaching intersection which gives them sufficient time to give way to vehicles travelling on the opposing road".

The intersection where Chante Harmer crashed, photographed in 2019 after improvements were made by the council and landowners. Photo / Google

In the Ashburton district alone there were 79 intersections considered similar to the one where Harmer crashed.

"The crash which is the subject of this inquest illustrates the extremely high cost
of a high-speed crash. There is a risk that deaths will occur in similar circumstances," he said.

"This crash illustrates the danger that drivers on long, straight rural roads may not identify the presence of an intersection insufficient time to stop.

"Drivers should be alert to the possibility of intersections on rural roads and pay close attention to signs and road markings warning of an approaching intersection."

His main recommendation was that the ADC conduct a review of the 79 intersections noted at the inquest to see if the existing combination of road signs and markings were "adequate for the purpose of providing the safest possible environment for road users".

Further, he recommended Waka Kotahi NZTA conduct "a review of international, national and regional practice of the use of traffic signs and markings that relate specifically to
controlling risks at rural crossroads".

"This should include consideration of the issues identified above in relation to warning
signs," he said.

"As part of its research study of rural crossroads, Waka Kotahi should identify those authorities who are responsible for rural crossroads which are subject to the same potential risks as those identified in this case and provides advice about how to address these risks."

ADC infrastructure services group manager Neil McCann said he welcomed any recommendations that "help reduce the risk of accidents on our roads".

"And we will consider the issues raised in the findings when undertaking a review of our similar intersections," he said.

A Waka Kotahi NZTA spokesperson confirmed last week that, based on the Coroner's recommendations a review had been undertaken by consultants as well as a review by Waka Kotahi staff.

The review was at the draft stage.

The agency also recommended to the Coroner during the later stages of the inquest process that a risk assessment of rural crossroads was developed so they could be "ranked according to severity".

"We have engaged a consultant to develop a risk assessment process that can be used for the entire road network or by individual road controlling authorities," said the spokesperson.

"The work is complex and although it is well advanced it is not yet complete or ready for distribution."

It was also agreed that a "programme of improvement works, prioritised to risk, that increases the level of management of the safety risks at rural crossroads" was established.

That work was also underway.