New Zealand would need to heavily cut cow numbers, stop conventional car imports, decarbonise the energy sector and get most Kiwis into electric vehicles - all within 14 years - to hit ambitious greenhouse gas targets.

A long-awaited emissions analysis - arguably the most important to date - warns the country is on track to fall millions of tonnes short of hitting targets under current climate-change policies.

Also among the bold steps the recently-formed Climate Change Commission laid out in its just-issued draft advice was an end to coal heating, more forestry, greener homes and a waste-stripping "circular" economy.

The commission was tasked by the Government to find if New Zealand's climate commitments were compatible with global efforts to limit warming to 1.5C above pre-industrial levels.

Its answer was no - and that New Zealand could no longer rely on its forests to offset emissions.

The good news was the "transformational and lasting" change needed could be made right now with existing technology - and at relatively little cost to the economy.

Its analysis found that meeting the emissions budgets it proposed out to 2035 were likely to be less than one per cent of GDP - much lower than what was estimated when new 2050 targets were set.

But some sectors would feel more pain than others.

The coal mining and oil and gas industries, particularly, would lose up to 1,100 jobs by 2035.

But the commission found many workers in those energy industries most affected by the transformation had important skills that would prove valuable in others.

"We expect employment will rise in the circular economy, development of biofuels and hydrogen, and in deploying and supporting new technologies."

Under current policy, New Zealand would fall short of its 2050 target of net-zero long-lived gases by 6.3Mt of CO2-e.

Biogenic methane - largely stemming from livestock and responsible for a third of our greenhouse gas emissions - would also come down only 12 per cent below 2017 levels.

That was well beneath the Zero Carbon Act's targeted reduction range of 24 to 47 per cent.

Forests that currently sequester an average 6.5 Mt CO2e per year would need to be pulling nearly double that by 2035 - at 13.6 Mt CO2e.

New Zealand's target range for slashing biogenic methane - much of it from farm livestock - would fall short of what's needed, an analysis shows. Photo / Mark Mitchell

Fluorinated greenhouse gases, from refrigeration and air conditioning systems, would need to fall 29.7 per cent from 2018's levels of 1.9 Mt CO2-e.

Importantly, the report set out what specific cuts would be required across each sector, by 2035.

Particularly, the 1.2Mt CH4 of biogenic methane and 8.3Mt CO2-e of long-lived gases currently emitted by agriculture would need to fall by 0.97 Mt CH4 and 6.9 Mt CO2-e respectively.

Waste methane emissions, mostly stemming from landfills, would need to be cut from 0.14 Mt CH4 to 0.12 Mt CH4 - and fluorinated greenhouse gases, from refrigeration and air conditioning systems, would have to fall from 1.8 Mt to 1.2 CO2-e.

Transport emissions, which account for a third of our long-lived emissions - and mainly through the petrol and diesel our cars, SUVs and trucks use - would have to fall from 16.6Mt of CO2-e to 8.8 6Mt of CO2-e.

The other big chunk of our emissions pie - those created through power generation, manufacturing, producing oil and gas, and heating our homes and offices - would have to be pushed down from 18.8Mt to 10.4 Mt of CO2-e.

More trees were also a vital part of the mix.

While forestry pulled about 9.5Mt of carbon dioxide out of the atmosphere today - our emissions would be 14 per cent higher without it - that total needed to be racheted up to 15.5 Mt.

Based on estimates there was between 1.1 and 1.4 million hectares of marginal land available to be planted as new forestry - albeit much of it steep and erosion-prone - the commission's path assumed exotic afforestation would ramp up to 25,000 hectares per year from 2030.

The cuts would mostly come from road transport and heat, industry and power.

To force down methane levels, the commission's path didn't rely on future technology like inhibitors, but changes in farm practices and action in landfills. 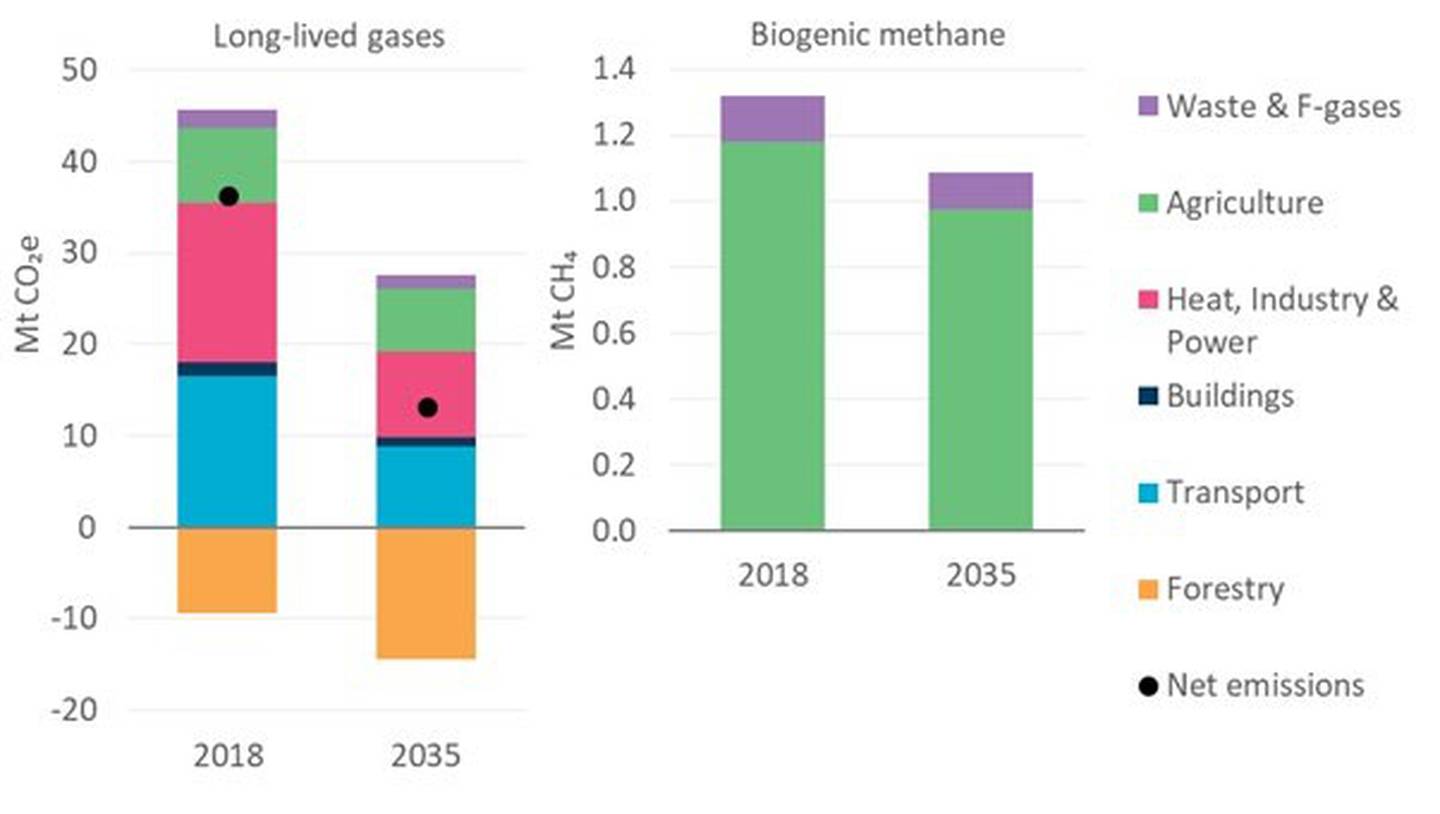 This graph shows how our path would reduce emissions across all sectors by 2035. Long-lived gases from agriculture are mainly nitrous oxide and some carbon dioxide. Source / Climate Change Commission

Dairy and sheep and beef animal numbers would need to be brought down by around 15 per cent by 2030, compared with an eight to 10 per cent reduction under current policies.

The transport network would need to be "almost completely" decarbonised - with no further no further internal combustion engine light vehicles imported after 2032.

Building new infrastructure this decade could avoid a bottleneck in the next - all while coal fired generation at Huntly closed some point un the 2020s, and the New Zealand Aluminium Smelter at Tiwai Point was finally shut in 2026.

"From 2030 onwards, the rate of afforestation for carbon removals would reduce," the report said.

To force down methane levels, the commission's path didn't rely on future technology like inhibitors, but changes in farm practices and action in landfills.

The transport network would need to be "almost completely" decarbonised - with no further internal combustion engine light vehicles imported after 2032.

Commission chair Dr Rod Carr said the advice was "ambitious but realistic" - and made a clear case to Government for taking immediate and decisive action on climate change.

"As a country we need transformational and lasting change to meet our targets and ensure a thriving Aotearoa for future generations.

"The good news is that our analysis shows there are technically achievable, economically affordable and socially acceptable paths for Aotearoa to take," he says.

"But the Government must move faster – and support business, agriculture and community to do the same."

The Prime Minister Jacinda Ardern said the commission's advice laid out an achievable and affordable roadmap.

Ardern also claimed climate change response was an economic opportunity for our country.

Exporters relied on our clean green brand and there would be new opportunities for Kiwi businesses as New Zealand adapted to a zero-carbon economy, she said.

Climate Change Minister James Shaw told the Herald he wasn't surprised at the stark numbers in the report.

Yet he was still confident much of the kind of aggressive action set out could come within a reduction plan due out later this year, alongside the first three sets of five-year emissions budgets.

"We've got a lot of policy work to do, in a pretty short period of time, basically across every sector of the economy."

Along with the Zero Carbon Act, the Government had already driven through a ban on new offshore oil and gas exploration and set a soft cap on the Emissions Trading Scheme.

Last week, it announced it would mandate a lower-emitting biofuel blend across the transport sector, pass a new fuel-efficiency standard for car imports this year, and only buy zero emissions public-transport buses from 2025.

"But they appear to be exhibiting a very high degree of confidence that we can make that transition with current technologies, at either a very low price point, or even at net benefit to the economy," he said.

"So therefore, the message is that there technically shouldn't be anything to stop us from moving on this stuff."

He said this would require political will - which was in turn dependent on how much social licence the Government had.

"I guess the difficulty will be that there will be some industries that are going to have to work a lot harder than others, and there will be a lot of interest groups arguing for an easier ride.

"I think this is why the commission's advice is so useful, because they ... kind of recommend what they feel is a fair distribution of effects across the economy."

The commission's draft advice will be open for consultation from tomorrow.

"The commission is clear that this is draft advice and is committed to true consultation," Carr said.

"Through consultation we are sure we will receive more valuable feedback and are prepared to make changes in light of what we hear."