A Captain James Cook statue that has been vandalised with the words "This is our land" and "Thief Pakeha" in Gisborne has stirred controversy online.

The statue, where graffiti was scrawled on the globe, is placed at the reserve at the Customhouse St end of Awapuni Rd.

Since the photos have been shared online, it has caused a divided response by Kiwis, with some believing that the vandalism exposes the "truth" about James Cook and it should be taken down. Since the photos have been shared online, it has caused a divided response by Kiwis. Photo / Supplied

"Tear it down and put up a statue of our ancestor Paikea and Porourangi," one person wrote.

Another agreed: "Good Job! Put something there significant to the Tangata Whenua."

"It would be better putting a statue of the mayor who has learnt our Reo than Cook, Government don't want to put our land wars in the curriculum but they would parade this bugger. Good job to whoever vandalised it," one person said.

Others believed that people should let go of history and focus on our country's future.

"How's about let's not follow in America's Footsteps, and create our own paths for our next generations to come. Why procrastinate over the past when you can better your future. Protest to have the statue removed if you will, this type of 'Art' is happening way too much!" one person wrote.

Another wrote: "Most people born in NZ are part Maori and part European even if either doesn't want to admit it. All these things are doing is hurting each other and halting progress. We are literally all one now, we all have both bloods running through us on some level. Can we not progress into the future without the divide?"

Some believed that our society wouldn't be like this today if James Cook didn't discover New Zealand. 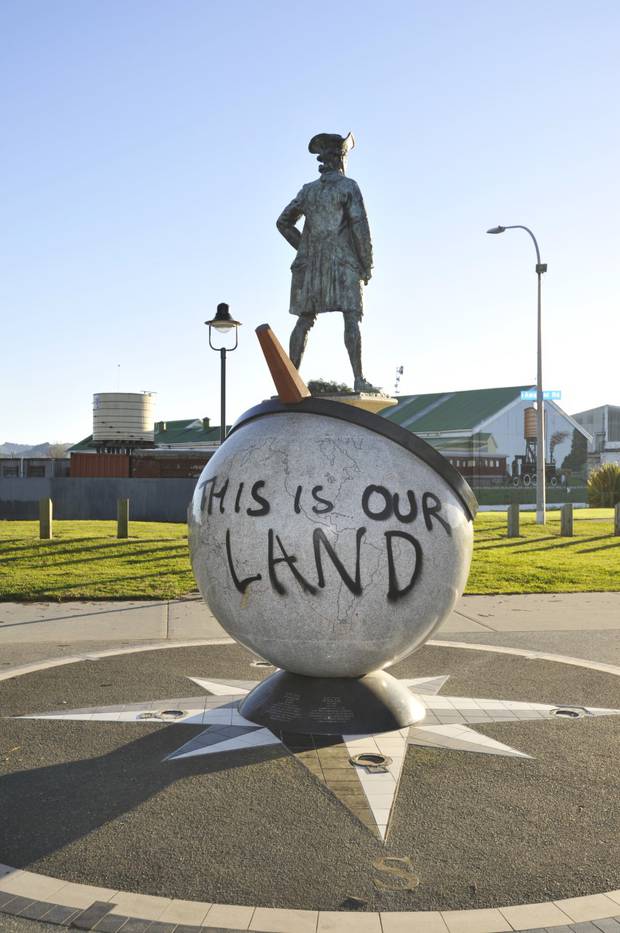 "This is our land" was written on the back of the statue. Photo / Supplied

"It is our land, but if the Europeans did not come we would not be here today."

Gisborne District Council director for liveable communities Andrew White said that contractors removed the graffiti as soon as it was reported early this morning.

"We will investigate security footage from the area to pass on to police," he said.

This is not the first time a Captain Cook statue has been vandalised in Gisborne.

In 2016, the statue that was formally on Kaiti Hill, was targetted by vandals who repeatedly slapped red paint on it.

However, after 50 years the Captain Cook statue will be removed and relocated to the Tairāwhiti museum by the end of the year after long-term opposition from local Iwi.

Local councillor Meredith Akuhata-Brown previously told Local Focus that she welcomes the debate around one of our most defining moments.

"Local Iwi were killed and that is the fact and it's not about right and wrong in this space, it's just what it is," she said. "It's uncomfortable to talk about. In my view this is a great space for courageous conversation and to make it right."