In one of Auckland's most outlandish building botch-ups, new Hobsonville Point garages have been built directly behind stormwater pits, blocking homeowners' vehicles from getting in.

Garages on Glidepath Rd and Desalt Dr in the new Airfields Quarters by Guangzhou-controlled Avanda Group aren't accessible from the street so the new pits have to be filled in.

The garages were unfortunately built directly behind the deep stormwater catchment pits known as rainwater gardens.

The botch-ups have caused much social media mirth, locals joking that 4WDs or carefully-placed planks or ramps would be needed to get cars into the garages.

"Utterly unbelievable. You could understand and maybe forgive it happening once, but twice?" said one property expert of the ridiculous mistakes.

Neo Wang of Avanda, which built the new homes with their inaccessible garages, acknowledged the mistakes. But he blamed consultants and subcontractors employed by his business, saying it was not directly Avanda's fault.

"Obviously it's not something we wanted to see. We will make sure we rectify the issues," Wang said, refusing to name the architects or other consultants. The garage built behind the rainwater garden on Desalt Dr. (Photo / Dean Purcell)

"The architectural and civil plan doesn't match. The civil work was not complete when the design of the houses was done. We will rectify this. We are shifting the location of the pits. We will backfill them and move them away from the garages," Wang promised.

None of the houses with blocked garages have been sold so no homeowners are disadvantaged, he stressed.

"We need to rearrange the positions of those rainwater gardens. We're in the process of getting that design and will apply for permits from Auckland Transport," he said. 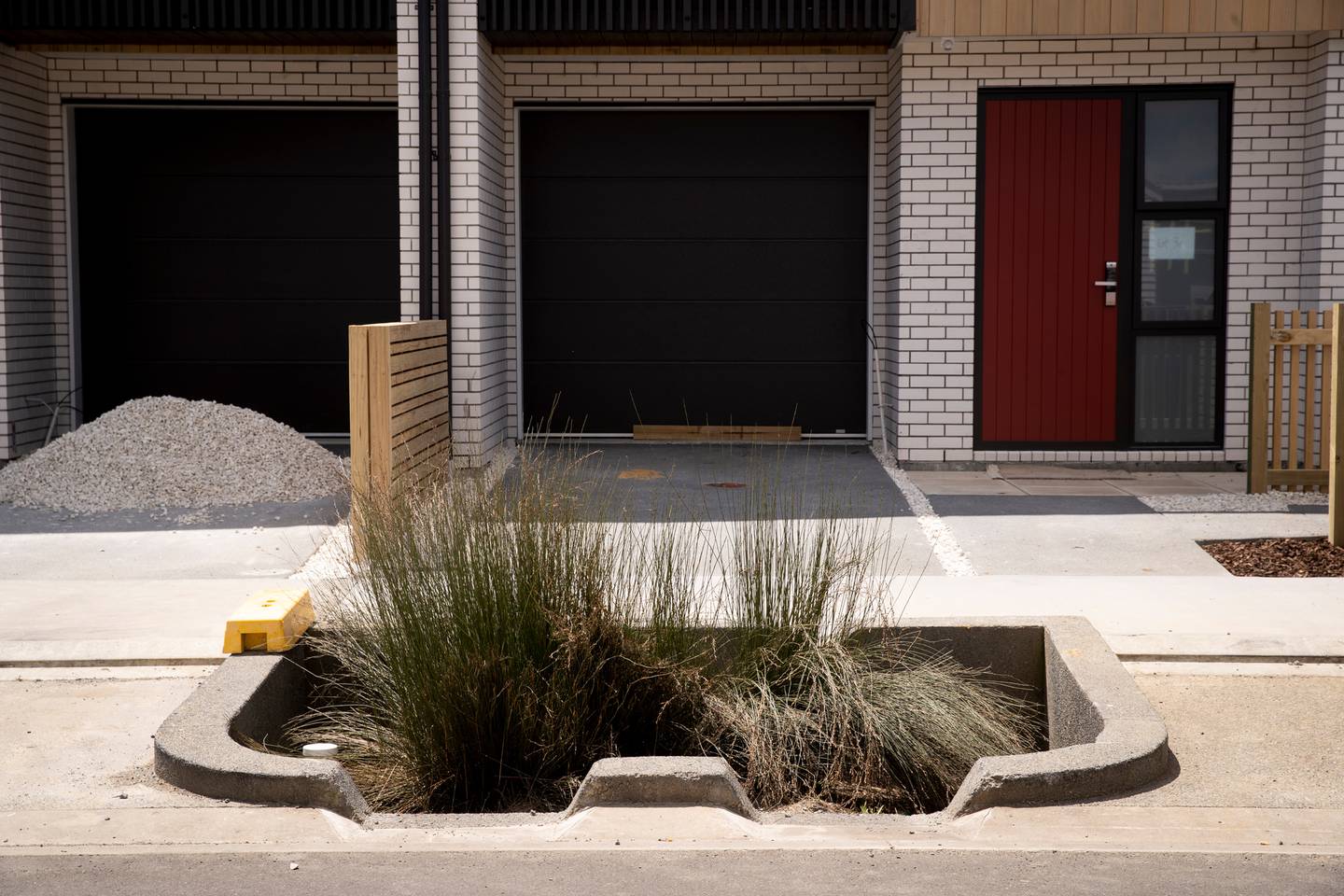 Asked about the costs, he said Avanda was awaiting subcontractor quotes on that now and could not give an estimate.

Those pits in front of garages could cost around $10,000 each to fill in and developing two new ones would be extremely expensive, he said, fearing that ratepayers might have to pay.

But an Eke Panuku spokesperson stressed that entity had sold the then council-owned site, formerly part of the Hobsonville Airforce Base, to Avanda in 2017 so it was not Eke Panuku's role to rectify the errors.

"As the housing developer, Avanda is responsible for all activity on this site, including the placement of the rain gardens within their development. Eke Panuku managed the initial disposal of the site on behalf of Auckland Council and has no involvement in the actual works being undertaken," the spokesperson said.

The rainwater pits which are so distinctive at streets in Hobsonville Point have been praised for filtering stormwater before it reaches the underground system, via a seepage mechanism.

Instead of pollutants like rubbish getting directly into the stormwater, the Hobsonville Pits filter such materials out so that cleaner water flows underground.

Those close to the Point's underground system said there was no way the pipes could be moved, but where the pits were placed along the over-ground system could be shifted. But that was a stupid error and should have never happened in the first place.

"How was it that council inspectors signed off foundations where it would have been clear where the garages were - inaccessible due to the pits?" one expert asked.

Avanda says it has developed a successful strategy for tackling the shortfall in the property market.

"By partnering with local councils, experienced architects and property developer specialists, we aim to be leaders in property development in New Zealand by building strong, vibrant communities where every New Zealander can find a home," the business says.

Avanda is a Chinese-registered company whose directors are William Guo of Remuera and Yuehua Tan of Hong Kong.

The Companies Office says the ultimate holding company is Guangzhou Jinxiu Dadi Property Co, whose registered offices are in Guangzhou.