An Auckland shopping centre is set to return to normal two years after massive slips swept away its main carpark after months of heavy rain.

About 120 new parking spaces will available from next month when the carpark behind the Birkenhead shopping centre reopens after two slips in late 2017 swept parts of the road, carpark and water pipes down a gully below Rawene Rd.

Months of heavy rain and poorly compacted fill were blamed as the cause of the slips, the first of which on October 9, 2017 swallowed about 50m of carpark.

A second slip in late November sent a drilling machine and more debris tumbling into the gully known as Rawene Reserve.

The mammoth job to stabilise the slips and rebuild the road and carpark has taken nearly two years, causing disruption for nearby residents and the Birkenhead shopping centre.

The last phase of the project is to restore the gully below Rawene Rd, which is full of landslide debris, re-establish the stream and reinstate a walking track, council's lead earth science engineer John Seward says in an update to Tuesday's finance committee meeting.

Kaipatiki Local Board deputy chair Danielle Grant said the job had taken longer than anyone envisaged, but the community had supported local business through hard times. 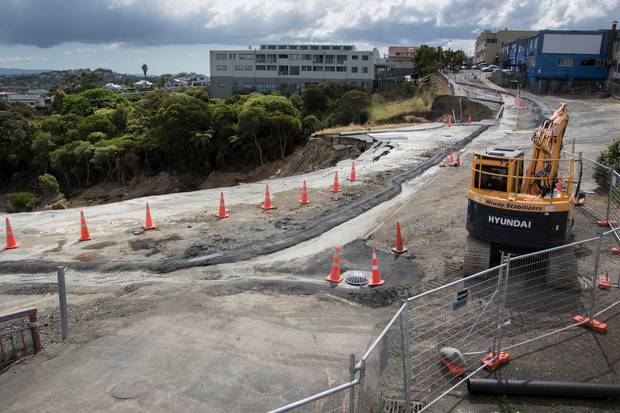 The Birkenhead carpark destroyed as a result of two slips in 2017. (Photo / File)

She said the last job was to reinstate the gully and a walkway from Birkenhead to the Chelsea heritage park.

"What a way to clear the weeds," Grant said.

Inquiries by the Herald revealed Auckland Transport rejected advice by engineers to install an "early warning system" to monitor unstable land along the two slips.

Auckland Council chief operating officer Dean Kimpton defended the actions of AT staff in March last year, saying although they did not follow engineers' recommendations, they carried out regular visual inspections of the carpark and acted when large cracks appeared.

The revelation shocked residents, businesses and then Northcote MP Jonathan Coleman, who said AT had the information about unstable land at Rawene Rd carpark, did not act on it and let down the community.

The latest update to the finance committee does not include costs, which have previously been put at between $10m and $20m.