New York Times best-selling author and leading forensic pathologist Dr Judy Melinek has moved her family to New Zealand as her home country continues to be ravaged by covid-19.

Melinek today told the Herald she felt so unsafe in her job in San Francisco Bay she didn't think twice about taking up a job offer when head-hunted by a New Zealand recruitment company in May.

Nearly two months to the day of receiving the email, Melinek and her family, including husband and co-author TJ Mitchell and their two teenage daughters, Leah and Diana, landed in Auckland, arriving early yesterday.

The family - who have never been to New Zealand before - are now doing their two-week quarantine, after which they plan to move to Wellington and begin their new life.

"We're so very excited to be here, I don't even have the words to tell you how excited we are, this is amazing," she said.

Melinek, an essential worker, is on a temporary 12-month work visa but the end goal was for their family to become permanent residents "and join the team of 5 million".

She will next month begin a new job as a forensic pathologist in Wellington, where their two daughters have also been enrolled in school.

Going to an actual school was something the girls were looking forward to, she said, as they were still on lockdown in Oakland and doing virtual learning from home.

The pair have since begun a new detective series, the first called First Cut, and the second book, After Shock - which Mitchell is currently editing - is due out in February next year. 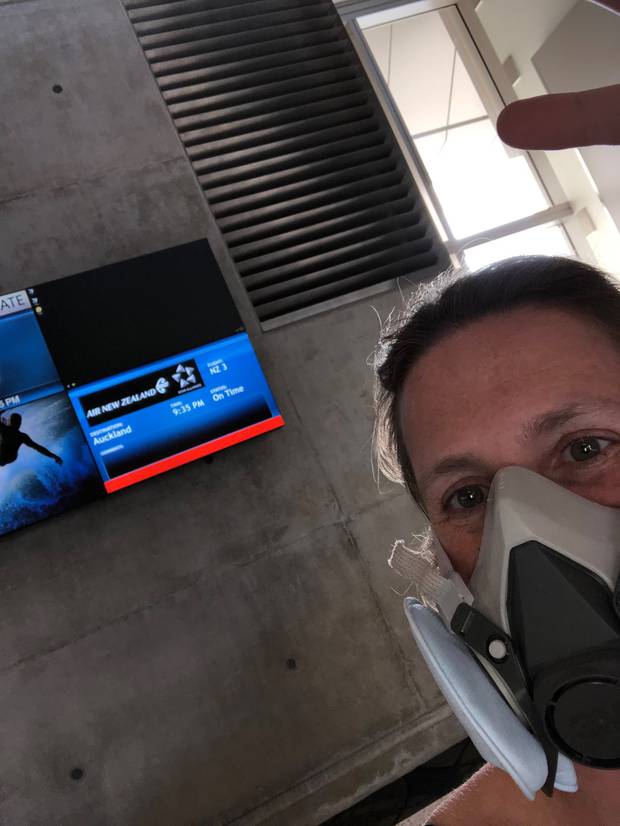 Melinek was leading the Covid-19 response for a sheriff-coroner office in Oakland, but became increasingly frustrated with the handling of the pandemic, both by state officials and President Donald Trump.

"I was frustrated and disappointed by the American response to the pandemic and personally I didn't feel safe at work.

"Just like temperature checks at the front door, it was voluntary.

"I was coming in every day to do autopsies and I didn't feel safe at work. It's just not a question of I had my PPE, eventually the risk to me was more from the living people at the office and the fact that people weren't following social distancing guidelines at work."

Melinek said she felt like California should have been shut down two weeks before it eventually was, on March 17, because she was "sensing there's a problem here".

California was now going through a resurgence in Covid-19 after it reopened, something that didn't surprise her.

She labels Trump's his handling of the pandemic "a disaster".

"It's been a disaster. An unmitigated disaster."

"He isn't handling it. Him and pretty much his entire party ... have been trying to pretend that the virus does not exist."

Melinek said the country needed a plan and to communicate it to Americans, in the way Prime Minister Jacinda Ardern had done here.

"You guys are the role model ... she and her response to Covid-19 is the reason why we're in New Zealand and why we relocated.

"The virus is not going to go away and [United States] response is incompetence, completely and utterly unscientific incompetence. It's not too late to turn this round ... but you can't bring back those 140,000 lives and the close to three million that are now infected."

She urged New Zealanders to keep an eye on what was happening in America, and how the resurgence in cases was being dealt with.

She had nothing but praise for what she had seen so far.

"What [NZ] has done is just brilliant. Not just locking down the border but also the quarantine hotels, the testing, the contact tracing, you need to ramp that up and I understand that you are.

"We want [NZ] to succeed and we want to be part of the team of five million."

When asked what they were most looking forward to once out of quarantine, Melinek said mingling with people and having a barbecue were high on her list.

Mitchell said he's likely to hug or shake the hand of the first stranger he sees.

Being seafood lovers, their first meal in the country last night was fish and chips, courtesy of Uber Eats.

She thanked everybody for "being so kind and so welcoming".

Dr Judy Melinek has been a forensic pathologist for nearly 20 years. While there were still many unknowns about coronavirus, and no vaccine, she said the human body left a lot of clues behind.

Autopsies revealed bloodclots and how wide-reaching they were and the damage the virus was doing to internal organs.

"It was autopsy diagnoses that recognised the role that bloodclots play in the disease process and have been, as a result, an arm of therapy.

"In therapy we are trying to minimise blood clotting in order to prevent the damage to the lungs, kidneys and the brain."

"You can see [clotting] in the skin, you can see it in the kidney, in the lungs, in the brain and so the people who tend to have more serious disease - people who need to be hospitalised in the ICU - have some of these more severe manifestations of the infection, that the virus is somehow stimulating the body's inflammatory and clotting systems."

Melinek said the effects on those dying from Covid varied, but it was "horrid" for those in a hospital setting.

"They're incubated, they're on a ventilator, they're struggling for breath and they're alone; it's completely isolating.

"In the realm of ways to die, this is up there in not a very good way."

In one case, a healthy 42-year-old - who was sick a month before her death in February - died of Covid-19 after her heart ruptured.

Children were dying of inflammatory syndromes that were post infectious - recovering, then getting sick again.

But the prognosis for those who survive Covid-19 didn't appear flash either, given it was possible the virus could re-emerge and permanently damage internal organs including scarring to the lungs - shortness of breath.

"There are people who have recovered from the virus, and are young and healthy, and yet after they recover they still find that they get short of breath when they're exercising and they never did before."

"We now have the situation where you have damage to your lungs that makes you at risk in the future to other infections and viruses and bacteria.

"So you have permanently damaged your lungs. It has the capacity to make you vulnerable long term, even if you survive.

She sighted herpes and shingles which lay dormant in the body before suddenly reappearing.