An Auckland mother-of-five lost part of her ear after being attacked by a dog while delivering for Uber Eats.

Alvin Murti was helping his wife Sina with her Uber eats deliveries on Friday night when she was mauled by a dog at a property in Manurewa.

Describing the dog as a "medium-sized pitbull", Alvin says it came underneath the gate while Sina was dropping off food at the house.

"It was like a movie scene, somebody getting mauled by a dog," he said.

"It happened in just 30 seconds; it was so fast. My wife is a strong woman and he [the dog] shook her down."

"He didn't bark or growl or anything, he just came and bit her leg and started shaking it, and then dropped her down and went straight to the throat … and took a chunk of the ear."

Sina said there had been no mention of a dog in the Uber Eats delivery instructions – it had simply said "deliver at door".

She said the dogs were not barking and she didn't feel threatened to exit the car.

"I got the shock of my life when it bit me and shook me to the ground," she said.

"It was like an out of body experience – I could hear myself screaming but I didn't know what to do. I just went in panic mode." Sina Murti had her ear bitten in the attack. Supplied

Although recovering from a knee operation, Alvin was able to get out of the car and spray the dog with throttle body cleaner, a solution he happened to have in the car from his job as a mechanic.

"If I wasn't there in a couple of seconds my wife would be dead, because that dog was going for the throat," he said.

Alvin said one of the owners had been apologetic, saying they would have the dog put down, but no one else in the area came to help them.

An ambulance was called, but Alvin said he ended up having to drive Sina to Middlemore hospital himself.

St John ambulance confirmed they received a call at 8.34pm on Friday to an incident involving an animal in Randwick Park, South Auckland.

A St John's spokeswoman said the patient's condition was assessed as appearing to be serious but not life-threatening.

"A clinician from St John's Clinical Hub advised it was safe and appropriate for the patient to arrange self-transport to hospital," she said.

Sina was in hospital until Sunday morning, when she was released with "amputation of ear" written on her discharge paper. 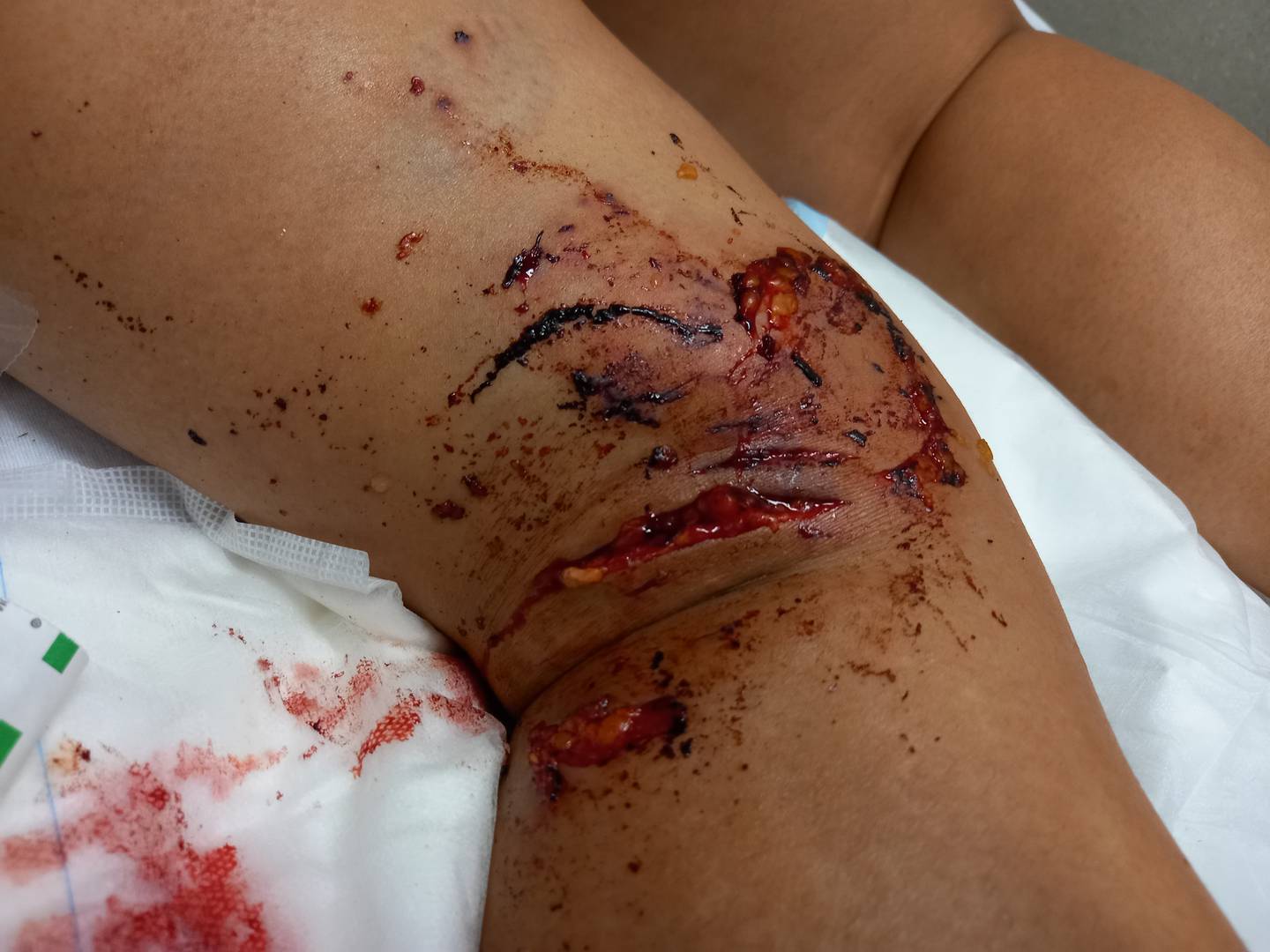 Sina's leg required stitches and will be in a brace for ten days. Photo / Supplied

She required stitches on both her leg and ear, and her leg remains in a brace for at least ten days. She said they will return to the hospital in a week, so a plastic surgeon can assess whether there is permanent damage to her ear.

Sina had been working part-time for Uber Eats to supplement her income while on maternity leave from her usual job as a health support worker. She contacted Uber shortly after the incident, and they responded to her via email.

Uber responded that they would assist police in investigating the incident, as well as conduct their own assessment of the situation.

"Your delivery experience and safety are something we take very seriously here at Uber," read the response.

"Making sure our delivery people are safe, respected, and comfortable is important to us, and any incident that threatens that safety is one we take very seriously.

"We will be looking into this incident and re-evaluate if this user will continue to have access to the app." Sina Murti of Auckland in hospital after the attack. Photo / Supplied

Auckland council Animal Management manager Elly Waitoa said the incident had been reported to them by the complainant on Saturday, but they could not comment on it specifically while it was under investigation.

"When Auckland Council receives notification of a dog attack, our first priority is to ensure the dog is contained or secured to prevent further incident occurring," she said.

"Depending on the seriousness and circumstances surrounding the attack, this may include impounding of the dog and retaining it at one of our Animal Shelters."

She said the investigating officer would then conduct a full investigation, recording statements from all involved.

"Where an attack has caused serious injury or if there is considerable aggression-related history pertaining to the dog and/or owner, the officer would then complete a full prosecution file for our legal team to review," she said. Sina Murti was hospitalised after the dog attack. Photo / Supplied

"Lower-level incidents are sometimes dealt with by way of infringement.

"We wish to remind people to ensure their dog is kept under control at all times to prevent incidents such as this from occurring."

Alvin and Sina described the attack as "terrifying" and wished they could have received more help at the time.

"I called the ambulance and they didn't come, and the neighbours – they looked through the windows but nobody was there to help," Alvin said.

"I don't want anyone, especially a woman, being hurt by a dog like that and nobody is there to help them."

"It was terrifying, there's no words. I couldn't get the pictures out of my head … it's overplaying and playing."