The City Rail Link is going to be bigger, and cost more, because the original projections for use now look inadequate.

As planned, the CRL's underground rail lines will have a capacity of 36,000 passengers per hour. That figure was expected to be reached in 2045.

Now, however, City Rail Link Ltd (CRLL), the Government/council joint-venture company managing the project, has provided Auckland Council with new projections. They show the 36,000 capacity will be reached by 2035 – just 10 years after it opens.

The CRL looks set to join other major public transport projects, like the electric trains and Northern Busway, whose popularity has outstripped the planners' expectations. Last year, Auckland Transport's HOP card system was used more than 20 million times – that target wasn't expected until 2021.

The council will discuss the new CRLL projections today, along with a proposal for the station platforms to be made larger, so they can take longer trains, and for a second entry to be built at Karangahape Station. 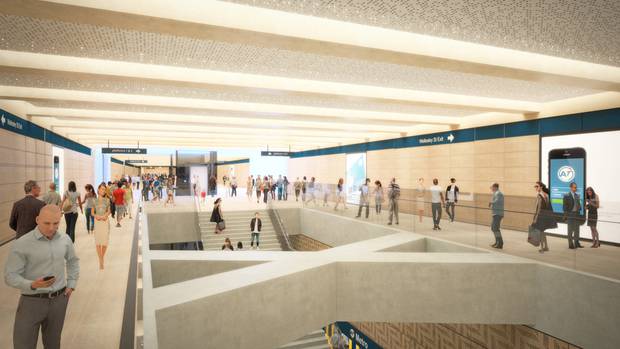 The extra cost could run to the "low hundreds of millions". The proposed new capacity is 54,000 passengers per hour.

Transport Minister Phil Twyford is expected to take the same proposal to cabinet next week.

Speaking to the Herald yesterday, Mayor Phil Goff said the choice was to press on as planned, and retrofit the system later, or do the extra work now and save money in the longer term.

"I think it's a no brainer to expand rather than retrofit," he said. "We have to learn the lesson of the harbour bridge, which was full soon after opening and needed to be upgraded with extra lanes very quickly. We've got to future proof, and it's a hell of a lot cheaper and less disruptive to do it now than to wait."

The problem is that while the CRL will allow for more trains, on all lines, the existing plan is for those trains to remain as three-car and six-car units.

Although the units can have extra cars added in groups of three, the CRL station platforms, as currently specified, won't be long enough to accommodate this.

When the plans were drawn up last year the option of having longer platforms was discussed by CRLL, council and the Government of the day. It was rejected. At the same time, a proposal to give the Karangahape Station two entrances was put on hold.

Now, Goff is supporting a CRLL proposal to change the project scope by lengthening the stations at Karangahape and Aotea, which will involve making the tunnels wider for longer sections.

The second entrance for Karangahape would be built at Beresford Square, to complement the first on Mercury Lane.

The council will analyse the proposal in a closed workshop today before deciding whether to adopt it in a confidential session of the governing body of council on Thursday. If it's adopted, and approved by cabinet next week, the tender process to build the stations and tunnels will be kickstarted. Tenderers will be invited to respond to a new Request for Proposals (RFP).

The first is to make no change to the initial build, and face the probability of more expensive changes being necessary with 10 years.

"Work would probably have to start after seven years," said Goff. "And it would mean we had to close the tunnels for two years while we did that work."

That option would be the most expensive and most disruptive, but it would delay the cost.

The second option is to broaden the tunnels but not build the stations till needed. That would also require the routes to be closed, but it would not be as disruptive, nor as expensive in the short term. Over time it would still cost more.

The third option is to do the job now. Goff declined to give a precise cost because he said he did not want to influence the tender process. He confirmed that the current overall cost of building the CRL is $3.4 billion.

The Herald asked him if the new work would add hundreds of millions of dollars to the cost.

The Herald understands from Government sources that this is likely to be right.
The cost of the CRL, including any extra costs, will be borne on a 50:50 basis by the council and the Government.

Goff said the extra work was not expected to delay the CRL's target opening date of 2024. However, the project is already behind schedule. One of the consortiums on the tender shortlist to build the tunnels and stations withdrew last year – the Herald understands that consortium was led by Fletcher Construction. Then the CRLL's chief executive, Chris Meale, retired suddenly in March.

The CRLL board has had to reinstate a competitive tender process, which required it to create a new shortlist of consortiums that had the necessary local knowledge and international expertise, while also finding a new CEO. Both have now been done.

Goff told the Herald the tender process is now "back on track" and that "at least two" consortiums have been shortlisted. The new RFP, if approved, will go to them in September.

"I'm celebrating this," he said. "We can do the job properly now."

But it's going to cost more.

2024
The year the CRL will open.
36,000
The maximum number of people who could be carried on the CRL, under existing plans.
2035
The year that capacity will be reached.
54,000
The proposed new capacity.
A few hundred million
The cost of enlarging the CRL to cope with projected extra numbers.