By Max Towle of RNZ

A Tasman woman who was almost killed when a giant tree stump dropped onto her truck is stunned that WorkSafe is refusing to investigate.

Pamela Coleman was heading home to her farm near Motueka when she drove around a sweeping bend and an enormous tree stump - roughly the size of her truck - dropped onto her bonnet.

"It looked like it had fallen from the sky," she remembers. "It came hurtling down and I thought that was it, that was the end of my life."

Her face collided with the steering wheel with such force that it cracked as her truck came to a shuddering halt. Rather than bouncing, the stump rolled on her car as one of its thick branches cut through her windscreen. "It would have killed anyone sitting in my passenger seat," she says.

Coleman quickly slid out of her truck and hobbled behind it in bewilderment.

"I couldn't breathe ... I didn't know it at the time, but I had broken ribs, and I just thought, 'Where is everybody? I'm on my own in the middle of nowhere?' A nanosecond later and I would have been dead, without a doubt."

The stump had been accidentally dropped by a digger operator who had been clearing a private property for much of the day. Coleman says he remained on the steep banks above the road, motionless in his cab - in shock, she believes.

The first person to arrive at the accident took a photo of Coleman, still clinging to the back of her truck - she too in shock. 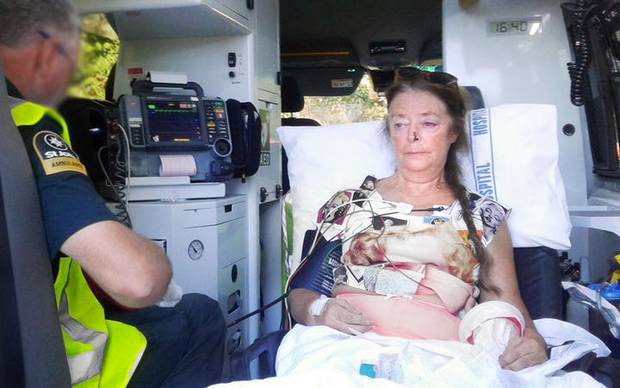 Pamela Coleman says she suffered broken ribs, a concussion, and had glass in her knees after the accident. Photo / Supplied

A few moments later, a local school bus arrived behind the wreckage, unable to pass. "If I had been driving faster, I might have missed the tree but the bus might have rammed into it."

Coleman says she suffered broken ribs, a concussion, and had glass in her knees. "I couldn't lie down because it was too painful, so I had to sleep sitting up downstairs for about two weeks. And I couldn't sleep because I kept having nightmares - every time I shut my eyes I kept seeing the tree again."

That was in April 2019. About a month later, she began to wonder why WorkSafe had not contacted her, so she called the agency. She discovered a file about her accident had been opened and closed within a day.

Why didn't WorkSafe investigate? Documents under the Official Information Act show a day after the accident, the digger operator sent WorkSafe an incident report: "Lost control of a stump, it rolled onto a road, car crashed into it causing minor scrapes and bruises," it says.

The digger operator, a local named Byron McEnroe who Coleman is acquainted with, would not comment. Coleman says she has forgiven him for what she acknowledges was an accident, but she is still concerned about WorkSafe's reaction. 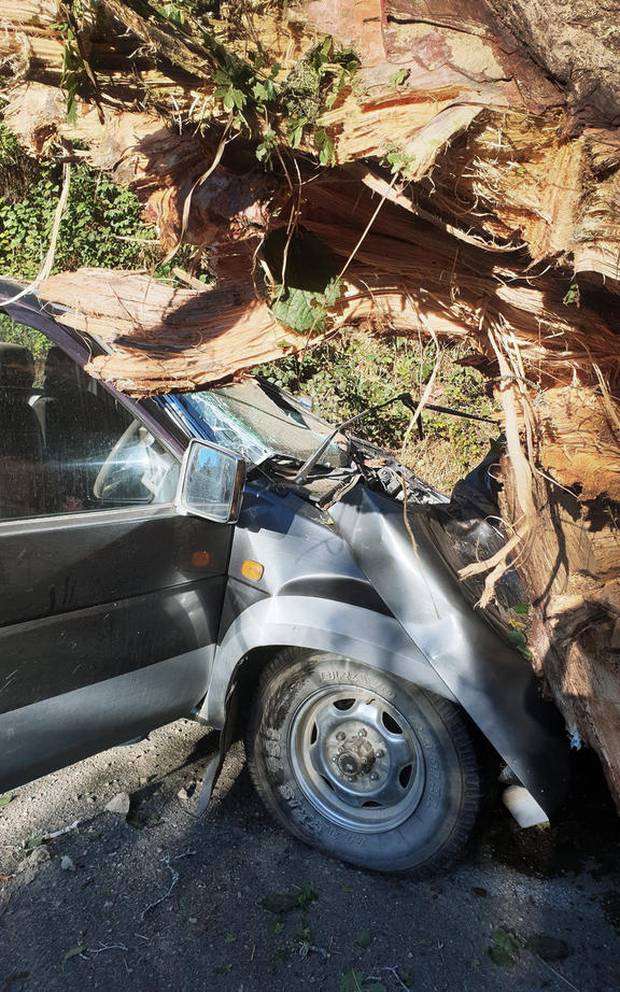 Coleman says when she phoned WorkSafe and found they had closed the file, she felt like she did not exist. "I explained to them that I was seriously injured and it nearly killed me and I asked them to reopen the file."

At her request, WorkSafe did reopen the file, but again declined to investigate and did not contact Coleman about its decision. She later asked for an explanation, citing the Official Information Act, and in August received a letter: "WorkSafe does not investigate … every event or situation that is reported," it said. "Many factors are taken into account, including the risk of injury, the seriousness of harm and the compliance history of the business or undertaking."

WorkSafe continues to stand by its decision not to contact Coleman or open an investigation. In a statement, it says: "We instead undertook a detailed site visit to review [the digger operator's] health and safety practices. Based on our visit and the results of [the digger operator's] internal investigation, we concluded appropriate action had since been taken to prevent a recurrence of such an incident."

But WorkSafe's site visit wasn't to the area where the accident happened. Instead, the agency says it visited the operator at a different site.

WorkSafe's response does not wash with Garth Gallaway. A lawyer specialising in health and safety law, he says an investigation was fully justified. He says WorkSafe's lack of communication with Coleman was poor and she should not have had to "poke and prod" simply to find out it had brushed aside the matter, without a proper explanation.

"In my view this was a very serious event which could have resulted in a fatality or fatalities … and the initial decision [not to investigate] appears to be based solely on the notification document filed by the [digger operator]," he says.

"The other thing I question is whether making a decision within 24 hours of receiving a notification - does this really allow WorkSafe the opportunity to consider whether further investigation is necessary?"

Coleman remains shocked that WorkSafe does not consider being hit by a flying tree an incident worth investigating. "I still can't get my head around why WorkSafe wouldn't."

She is also rattled by the reaction from the owner of the property the digger driver was working on. Gary Hirshberg, the high-profile co-founder of Stonyfield Farm, an American organic yoghurt company, bought the 69 hectare property in 2018 and is building an organic farm and education centre. He splits his time between the US and New Zealand. 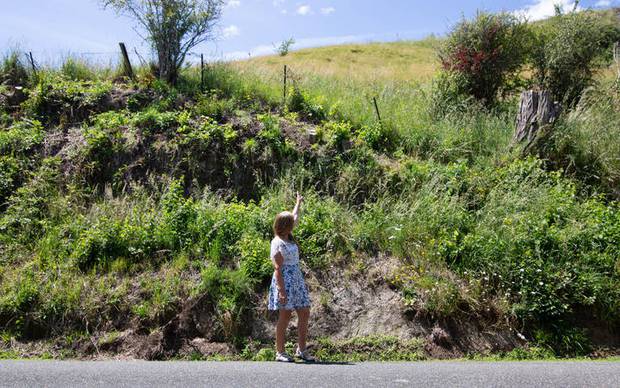 Pamela Coleman at the sight of the accident, pointing up to the area from where the tree stump tumbled onto her vehicle. Photo / RNZ / Nick Monro

There's no suggestion he was responsbile for the accident, but he offered to pay Coleman $2500 to make up the insurance shortfall for her written-off truck, as well as $800 in additional costs. There was a condition, though - she needed to sign a disclaimer that she wouldn't take any legal action against him.

"This agreement and the discussions leading up to it are confidential to us and cannot be discussed with anyone other than a legal or other professional advisor," his letter to Coleman says.

Coleman says Hirshberg's conditions left her with an uneasy feeling, and added to her distress. "I just felt insulted, to be honest. I felt really insulted by that and upset."

Hirshberg says he felt no obligation, but "felt badly about her accident and wanted to help her".

He says his offer was a kind gesture from one neighbour to another. "In my experience, having conditions is a common practice where a person is proposing an ex gratia payment. It is certainly absolutely the norm here in the States." 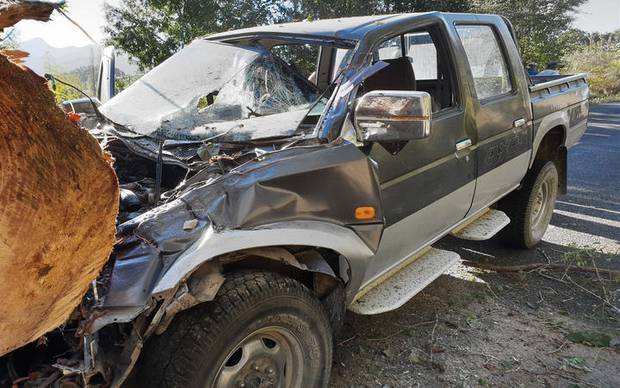 He says before making his offer, he had had nothing but civil and friendly interactions with Coleman. "There is an adage here in the States that "no good deed goes unpunished" and I am wondering if that may be happening here. I tried to help a neighbour in need. I am new to the area and still learning about local customs and practices. But the conditions I attached were prudent and reasonable and I stand by them."

But nine months on, it is Worksafe's response to the accident that still leaves Coleman "despondent".

"They're not doing their job ... if accidents like this are going to happen and they're not going to investigate, it's a real worry. What is their purpose? 'Come Home Safely' is what they say, but it didn't happen in my case, and who knows if there are other cases like mine that have just been washed over?"