There are 12 new cases of Covid-19 today, all in managed isolation.

Ten of the cases arrived on a flight from India on September 26 on flight AI1354, said director of public health Dr Caroline McElnay.

She said it could be the highest number reported in one day from the same flight and it was possible we could see more cases linked to the flight.

The group tested positive around day three of their time in managed isolation. All have been transferred to the Jet Park Hotel quarantine facility.

The 10 cases were spread out on the plane, sitting between rows 14 and 41, McElnay said.

The theory is that the travellers were infected in India before boarding the flight. Genomic testing was being done and authorities would look to see if anything suggests transmission on the flight. Test results should be through within the next few days.

Before people board flights in India they are being checked to see if they are symptomatic.

The journey from India was flown by Air India, with its international crew in managed isolation when they arrived - which is now standard practice, McElnay said. The crew have since left the country.

"I think they were in for two days," McElnay said. "They were transported to managed isolation, [they] stay there and then get back on a plane and returned back to India."

For the remaning two cases, one arrived on a flight from the United States on September 26, testing positive on day three of their stay.

The 12th case arrived from the Philippines via Taiwan on September 3. They were tested because they were a contact of another case and tested positive yesterday. 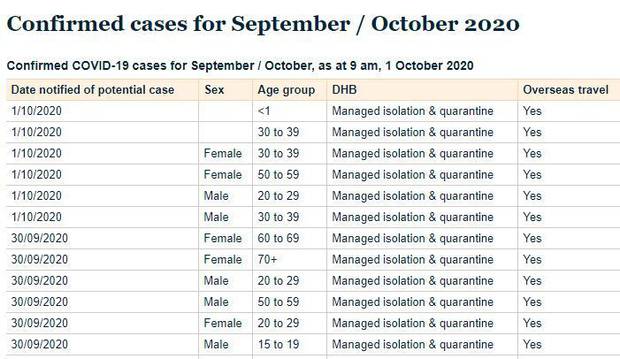 McElnay said she appreciated today's number of cases was a lot and it reflected the high levels of Covid-19 that were popping up around the world.

"This also re-emphasises why we have strong border control measures in place."

Asked if she knew how many people had arrived in New Zealand since the latest outbreak from India, McElnay said she didn't have the numbers.

However, the Ministry is looking at pulling together figures to assist with their assessment of high-risk countries.

"We are also looking at pulling the data on recent flights so we can see how that matches up with the level of risk in those countries."

53 cases, one in hospital

New Zealand now has 53 active cases - 42 have been imported, the remaining were in the community. There are 1492 confirmed cases that have been reported to the World Health Organization.

Fourteen people are isolating in an Auckland quarantine facility from the community, which includes five people who tested positive for the virus.

One person remains in hospital with Covid-19. They are on a general ward in isolation at Middlemore Hospital.

"Since August 11, our contact tracing team has identified 4047 close contacts of cases, of which all have been contacted and are self-isolating, or have completed self-isolation," McElnay said.

The number of cases has dropped from yesterday because some records have been identified as duplicates in the Ministry's system.

Over 5000 tests were completed yesterday, the total number of tests completed nears 1 million.

The Auckland August cluster is not yet considered to be closed.

A "formal and lengthy" process needs to take place before they can confirm the case is closed, McElnay said.

"It's certainly looking very encouraging and hopefully we'll be able to report that it's closed in due course."

The process is largely time focused, with 28 days having had to have passed since the last case tested positive.

"On the basis of what we're seeing at the moment, that would certainly be another 28 days before we could officially close it," McElnay said.

McElnay reminded school holidaymakers of the importance of remaining vigilant to stop the virus spreading. Anyone who becomes ill on holiday should contact Healthline or their GP.

"If you're told to get a test, do not wait until you get home to get tested."

People should also sign in to places using the Covid Tracer app or by keeping a record of where you have been.

"This is especially important when on holiday because you may not remember all the locations you've visited," McElnay said.

Good hygiene practises should be maintained, including washing and drying your hands, or using hand sanitiser if you're unable to wash your hands.

The app has recorded a total of over 80 million poster scans, and users have created 3,475,327 manual diary entries.