One of the first people on the scene of a horror crash in Invercargill says he will never get the faces of the victims out of his head - and after losing his own daughter in a fatal last year knows exactly what their parents will be feeling today.

A number of teenagers died when the ute they were travelling in collided with a truck on Queens Drive in the southern city just before 4pm yesterday.

Police are expected to release more information later today about the crash, how many people were killed and who was involved.

Logan Lalovaea and his wife were about 20m away from the impact and he spoke to the Herald this morning.

The couple live out of Invercargill and had travelled into town to pick up items from the pharmacy.

While they were waiting to collect their items they decided to park at Queens Park - and had not been there long when the carnage unfolded.

"We were just watching traffic and saw the truck, then we heard a big bang and the truck's brakes," Lalovaea said.

He ran straight towards the scene.

He believes the ute driven by a teenage boy with three passengers may have lost control and crossed over into the oncoming traffic hitting the truck head on.

A car in between the two vehicles swerved and narrowly missed being part of the impact.
Lalovaea said the woman in that car got out and ran to help.

He started filming, thinking the information he captured may help police later.

His own daughter died in a crash last year and his instinct was to document what had happened from the start.

"When I first saw the ute I just knew there would be no survivors," he said.

"The truck driver was very, very upset - understandably. I feel really sorry for him." 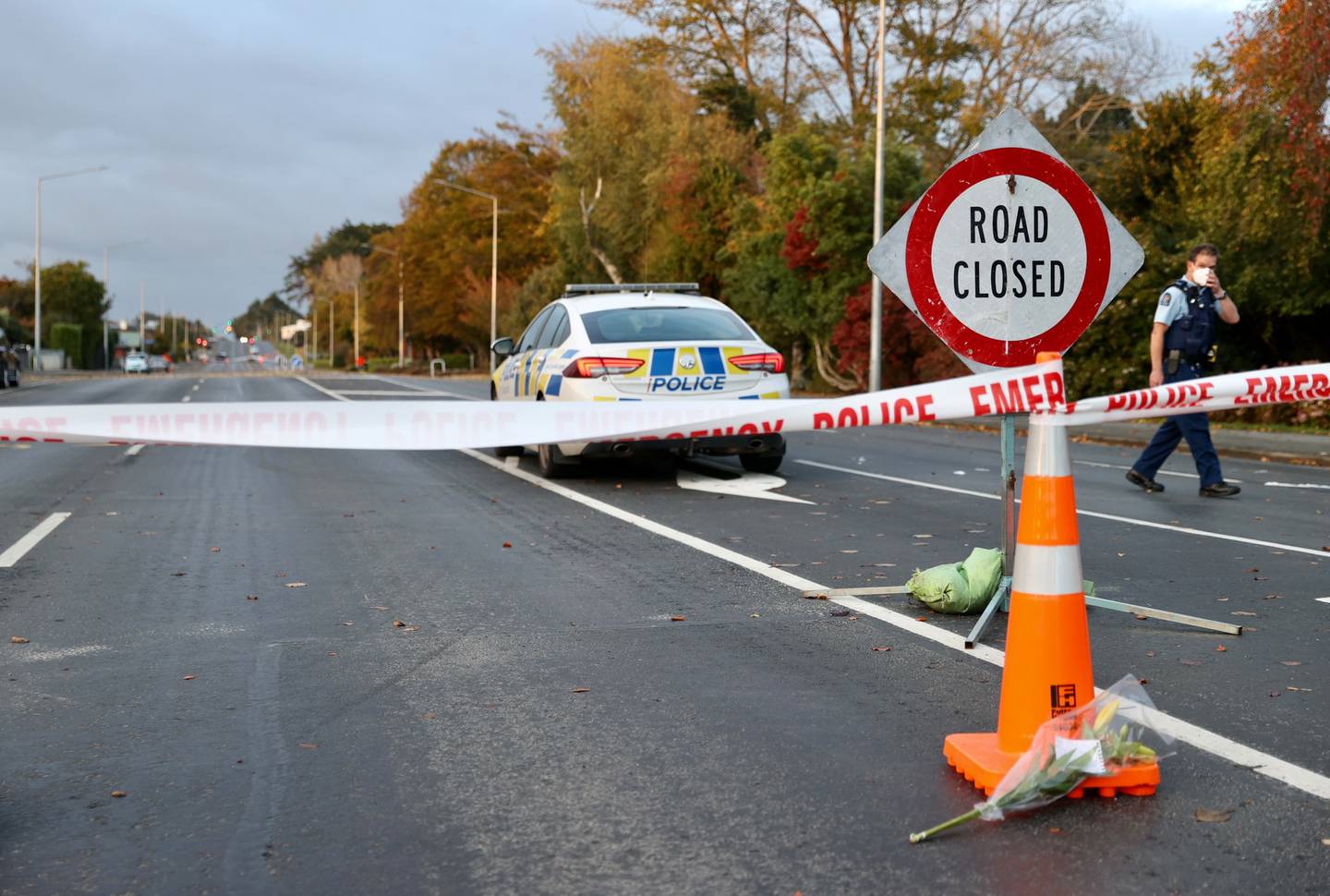 Police remain at the closed off scene of Friday's multiple fatal crash in Invercargill this morning. Photo / George Heard

Lalovaea found a crowbar to help wrench the back door off the ute as the woman from the car that swerved stood on the back and reached though the smashed window to stabilise the neck and head of a boy she thought was still alive.

Others rushed in to help including an off duty nurse and surgeon.

Lalovaea said it was "very traumatising".

He cried while speaking to the Herald and said: "It's not something you ever want to see".

"I didn't sleep last night… seeing those boys… it was very brutal.

"It was pretty horrible… I lost my daughter, my only child in a car crash last year - so seeing something like this was traumatising.

"I'm still grieving the loss of my daughter and the to see something like this… I keep seeing those young boys' faces."

Lalovaea said he knew in part what the boys' families would be going through today.

"You can't imagine what it's like to get that phonecall from the police…I really do feel for the families and I also feel for the truck driver and his family - he is going to suffer big time.

"Lives lost right in front of him… Hopefully he's got good support."

Lalovaea said he had removed his footage from social media out of respect for the families of the victims.

He reiterated that he only started filming in case he could capture details that would assist police.

The investigation into the crash is ongoing and Serious Crash Unit officers have been back at the scene since first light today.

The wreckage has been removed but a section of Queens Drive remains cordoned off.

The family of one of the boys has spoken of his death on Facebook.

His brother posted a photograph of them together, captioned: "fly high little bro, I love you so much".

Their mother then wrote "rest in love baby boy".

The Herald has chosen not to identify the teenager yet.

His Facebook page states he is from Bluff, just south of Invercargill.

Another relative said: "There are no words to express how I'm feeling. I'm absolutely heartbroken I will miss you so much mate. Love you forever."

Earlier today the Herald revealed that seconds after a horror crash which killed multiple teenagers, members of the public had frantically clambered onto the wreckage to try to help.

Footage shared on social media by a witness showed the aftermath of the crash.

The video, uploaded live by a man who got to the scene seconds after the crash, shows the ute crushed under the front of the truck, with people clambering over the wreckage to get to those inside. 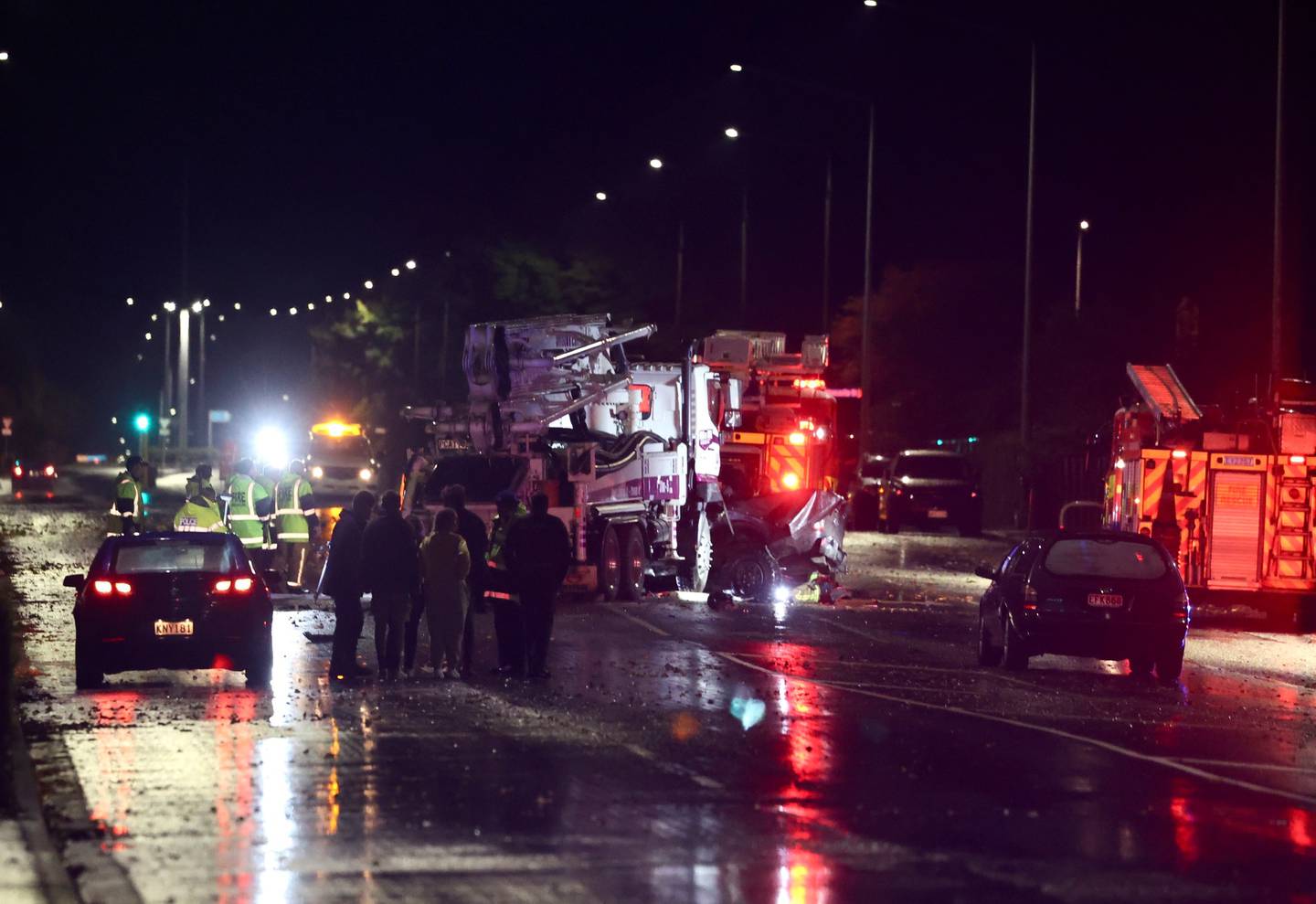 Multiple people died in Friday's crash in Invercargill after a ute collided with a Truck. Photo / George Heard

The distraught driver of the truck climbs out the window and walks away from the scene in shock.

A group of motorists gathers around the ute and use a crowbar and tools to try to get to those inside the wreck.

"Hang in there mate," one man is heard saying as sirens pierce through the footage.

Flowers have been left at the police cordon surrounding the crash site this morning.

The wreckage has been removed from the road overnight but the street remains closed.

A note on the flowers reads: "Rest in love boys. For ever grateful to be able to know you all."

The police Serious Crash Unit was at the crash site this morning and more information is expected to be released today about the incident.

The number of victims has not yet been released.

A man who lived nearby said he heard "a big bang".

Last weekend, four people died on New Zealand's roads during the official Easter Weekend holiday road toll period. That was down on nine from 2021.

Ahead of the long weekend with Anzac Day on Monday, police urged people to be careful on the roads and specifically monitor their speed.