Three of the victims were 16 and one was 17. Three of them were from Bluff and it "was a tragedy for the Bluff Community as a whole".

Bowman said police were appealing for witnesses to the crash between a concrete truck and a Ford Ranger.

Police had this morning helped families with the grieving process by showing them the scene, he said.

It was a "tragedy for any type of family to go through this", Bowman said.

Asked about possible causes for the crash, he said he would not speculate and police were still investigating.

The crash "shook up all the emergency services involved", Bowman said, saying it was pretty traumatic for many who had families themselves.

The truck driver had minor injuries and has been discharged from hospital.

Seconds after the horror crash, members of the public frantically clambered onto the wreckage to try to help.

A ute carrying the four victims collided with a truck on Queens Dr in Invercargill just before 4pm yesterday.

Footage shared on social media by a witness shows the aftermath of the crash.

The video, uploaded live by a man who got to the scene seconds after the crash, shows the ute crushed under the front of the truck, with people clambering over the wreckage to get to those inside. 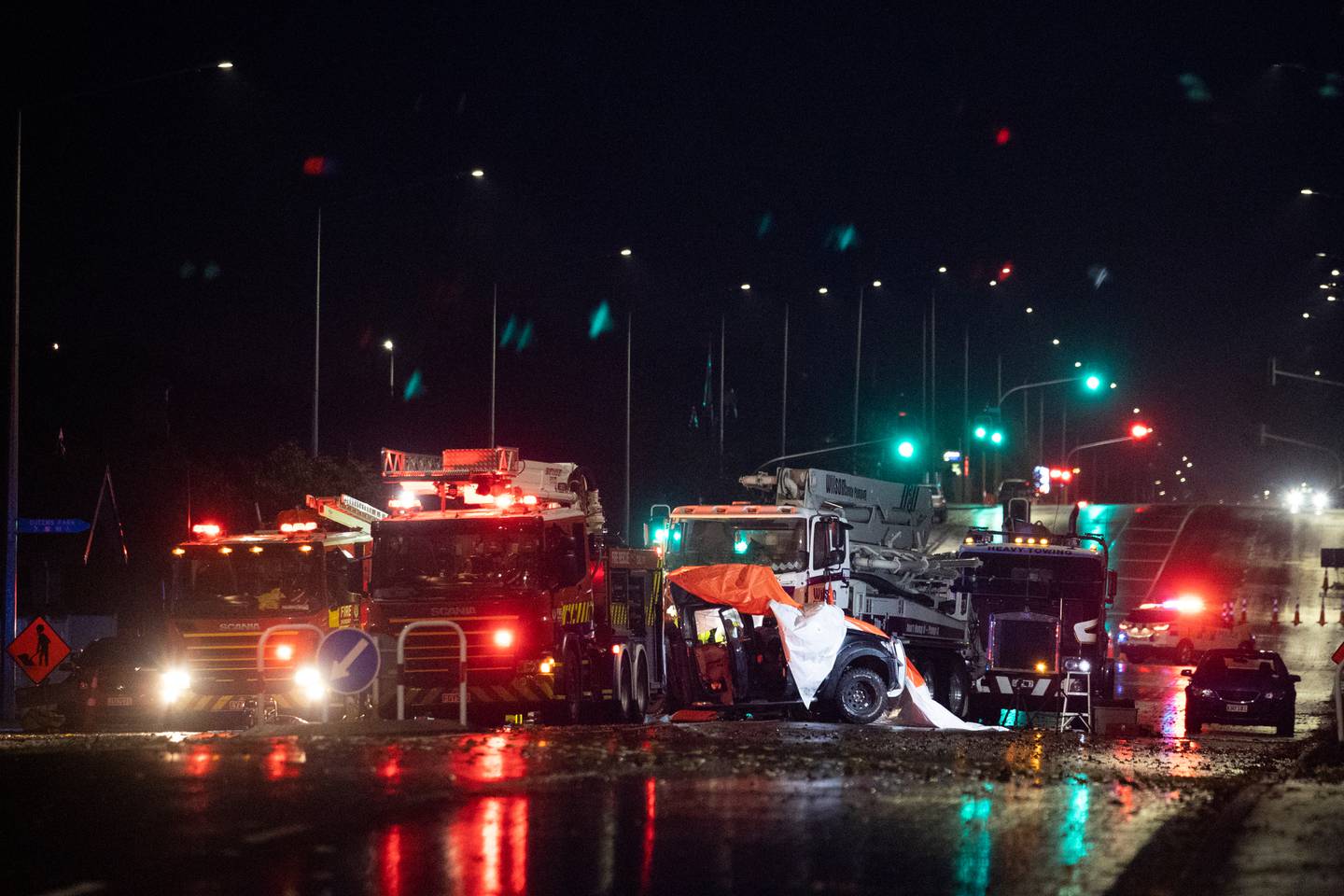 The crash between a concrete truck and 4WD took place just before 4pm on Friday. Photo / George Heard

The distraught driver of the truck climbs out the window and walks away from the scene in shock.

A group of motorists gathers around the ute and use a crowbar and tools to try to get to those inside the wreck.

"Hang in there mate," one man is heard saying as sirens pierce through the footage.

An off-duty nurse and surgeon appear at the scene and start to assist as the ambulance pulls up.

People who knew the victims arrived at the scene, including family members.

The family of one of the boys spoke of his death on Facebook.

His brother posted a photograph of them together, captioned: "fly high little bro, I love you so much".

Their mother then wrote "rest in love baby boy".

The Herald has chosen not to identify the teenager.

His Facebook page states he is from Bluff, just south of Invercargill.

Another relative said: "There are no words to express how I'm feeling. I'm absolutely heartbroken I will miss you so much mate. Love you forever."

Flowers have been left at the police cordon surrounding the crash site.

The wreckage has been removed from the road overnight but the street remains closed.

A note on the flowers reads: "Rest in love boys. For ever grateful to be able to know you all." 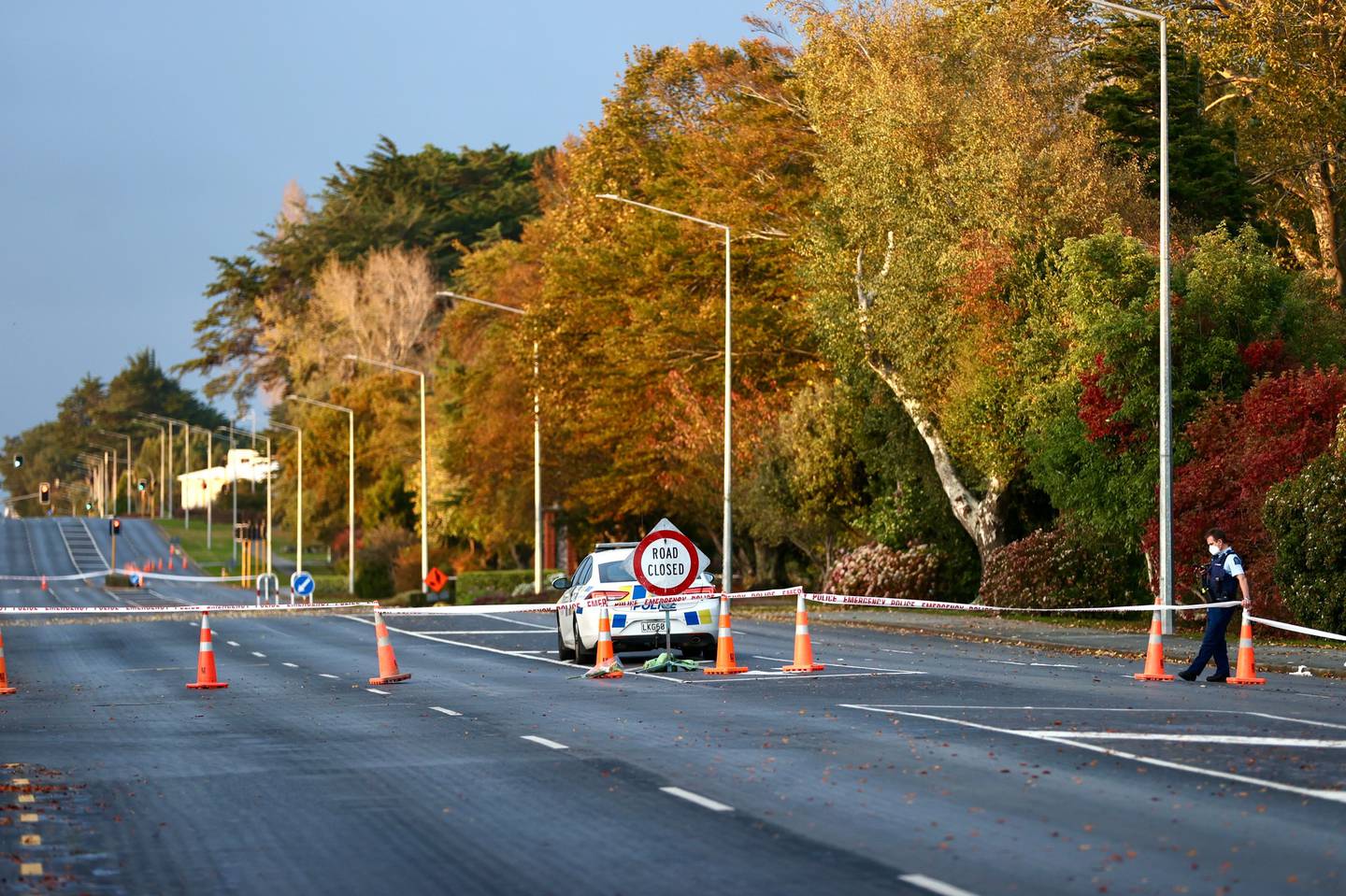 A police cordon surrounded the crash site this morning. Flowers had been left at the cordon, including one which said "Rest in love boys". Photo / George Heard

The police Serious Crash Unit was at the crash site this morning and more information is expected to be released today about the incident.

The number of victims has not yet been released.

A man who lived nearby said he heard "a big bang".

He saw a black four-wheel-drive that had been shunted sideways across the road by a concrete pump truck. The roof of the 4WD was caved in.

There were three men in the truck and they were visibly distressed, the witness said. One was walking up and down the footpath, while the others stayed in the cab.

Nearby residents, and other locals who have travelled past the crash site, earlier posted online about a large number of fire engines, ambulances and police cars at the scene.

It had been raining in Invercargill on Friday.

Emergency services attend the scene of a crash on Queens Dr, Invercargill, yesterday in which several people were killed. Photo / Ben Tomsett / ODT

A Fire and Emergency NZ spokesman said they had responded to a crash involving a car and a truck. There were people trapped when they arrived and firefighters were still at the scene just after 5.30pm.

They were only required to assess one person, who did not require transportation to Dunedin Hospital.

When asked about the condition of other vehicle occupants, she referred comment to police.

Last weekend, four people died on New Zealand's roads during the official Easter Weekend holiday road toll period. That was down on nine from 2021.

Ahead of the long weekend with Anzac Day on Monday, police urged people to be careful on the roads and specifically monitor their speed.