Temperatures across New Zealand have skyrocketed since Sunday but it's only the start of the heatwave forecast to blast the country.

Napier and Blenheim took out the title for the hottest spots yesterday with the temperature reaching 35C, according to the Metservice.

Metservice meteorologist Angus Hines said the same stale, settled weather from the long weekend will continue throughout this week.

Hot air would continue to move over the Tasman Sea, unloading a barrage of sticky weather.

WeatherWatch NZ analyst Philip Duncan said the highest temperatures were recorded in localised areas sheltered from the wind, not across the whole region.

A small spot north of Napier climbed to a sweltering 37C, he said, meanwhile, 36C was recorded in Marlborough Sounds.

In Lauder, Central Otago, resident Wanda Jaggard recorded 48C on a temperature gauge on the outside of her house.

She was quick to point out, however, that the gauge was exposed to full sun and sheltered from the wind.

"I'm not trying to be a meteorologist," Jaggard said.

"And it was really hot, you couldn't be outside - it was just so hot.

"Down here in Central Otago we do have pretty big extremes between the hot and the cold."

While sweltering temperatures in the 30s were set to continue, they were predicted to move more inland tomorrow.

The Metservice said today would be another fairly settled day in Auckland with some cloud in the morning and even a spot of early drizzle.

"Once the sun comes up that's going to burn away quickly. Much of the afternoon and evening is going to be dominated by warm sunshine and looking at a warm temperature of about 29C," Hines said.

Overnight temperatures would continue to be sticky as well, Hines said, with temperatures not expected to drop below 20C.

On Sunday night, the overnight low in the Nelson region was so high a 157-year-old record was broken.

The lowest temperature recorded in Richmond that night was 24.3C - the previous record for the region was 23.7C.

Eastern locations that had New Zealand's hottest temperatures over the past couple of days would slightly drop down, Hines said.

"The wind coming off the ocean will make things a few degrees cooler but they'll still be hovering in the high 20s to the low 30s.

"Some of the warmer spots are more likely to be inland, we're forecasting for Taumarunui and Te Kuiti both looking at a maximum of 34C."

Those trying to beat the heat shouldn't be afraid to run plug-in fans in fear of running up the power bill, Consumer NZ technical writer James le Page said.

"Most plug-in fans have a relatively small electric motor (50-60Watts) so the usage isn't too bad," he said. 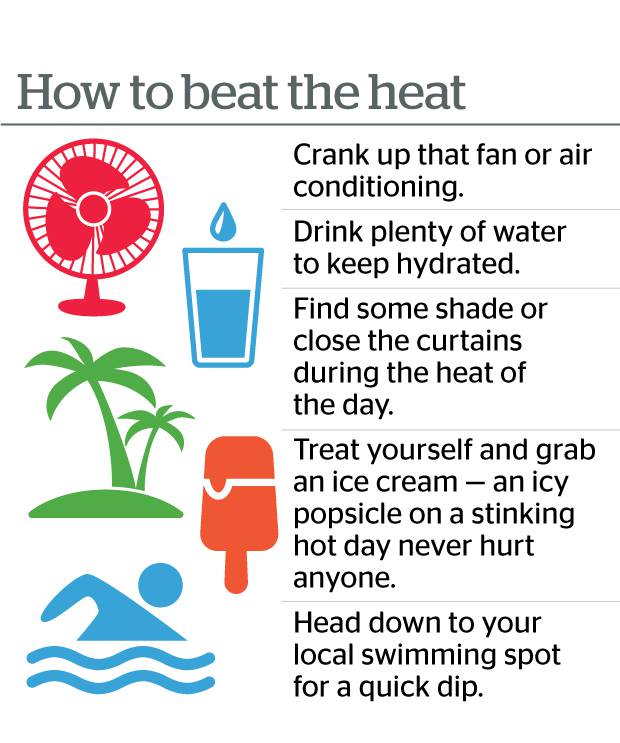 "A 60W fan running for four hours a day will cost around $2 per month with power costing 0.26c/kWh.

"If you have one running while you sleep for eight hours then it's $4 [a month]."

The hot weather can be defined as a heatwave because a number of places country-wide are forecast to meet the threshold, Metservice meteorologist Tui McInnes said.

As defined by the World Meteorological Organisation, a heatwave is five consecutive days with maximum temperatures 5C above average for the month.

In the North Island, Tauranga, Whakatāne, Te Kuiti, Taumarunui, and the Hutt Valley were on track for a heatwave as were Blenheim, Kaikōura and Ashburton in the South Island.

Metservice meteorologist Amy Rossiter said warm temperatures were expected over summer, but the length of the extremely warm period was unusual.

"Some parts of the South Island might only get six days over 30C in a year, and this week they could get five or six days in a row," Rossiter said.

The warm air mass is forecast to stick around until Thursday before a front moves up the country on Friday, bringing cooler temperatures.