Scientists have successfully used an experimental drug on a single American coronavirus patient, who recovered, sparking hope as China battles the deadly epidemic.

Chinese health officials announced Monday that 103 more people died from coronavirus, bringing the total global death toll to 1013. The health ministry in Hubei province also confirmed 2097 new cases of the disease, which has now sickened more than 42,000 people around the world, the majority in mainland China. More than 6000 remained in critical condition in the hospital, officials said. About 4000 people have recovered from the illness. 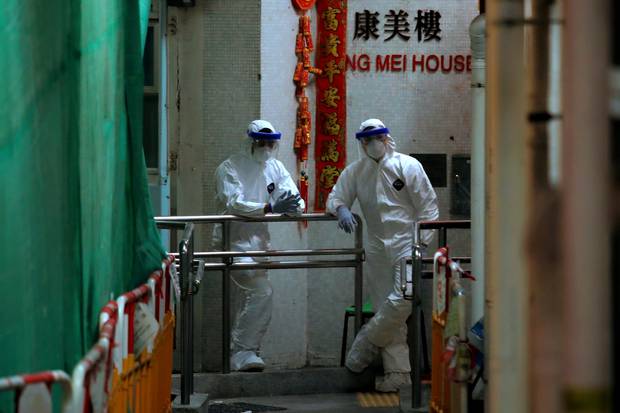 Personnels wearing protective suits wait near an entrance at the Cheung Hong Estate, a public housing estate during evacuation of residents in Hong Kong. Photo / AP

The outbreak has claimed 974 lives in Hubei province, the epicenter of the public health crisis. A Japanese citizen and an American citizen were recorded dead in Wuhan over the weekend.

More than 25,000 people remained hospitalised in mainland China, and roughly 76,000 were under medical observation, according to Chinese officials.

In Japan, an additional 65 people on board a quarantined cruise ship have tested positive for the virus, according to Japan's Health Ministry. Pressure is mounting to test everyone on the ship now docked in Yokohama, where 135 people are known to have been infected.

The drug, made by Gilead Sciences, was successfully used on the first US patient, a 35-year-old man in Snohomish County, Washington. He recovered, but a single case can't determine the extent to which the drug may have contributed.

Timothy Sheahan, an assistant professor of epidemiology at the Gillings School of Global Public Health at the University of North Carolina at Chapel Hill, said that instead of developing a new drug for each emerging virus, the hope is that remdesivir could be broadly useful and work against multiple coronaviruses.

"I think starting a clinical trial is essential for determining if this drug will work" against the coronavirus, Sheahan said.

One of the clinical studies will test remdesivir on infected patients who are in the hospital but do not have severe symptoms. The other will test it on people with severe infections, who are on supplemental oxygen or have other complications.

Gilead is providing the drug to Chinese researchers at no charge, according to spokeswoman Sonia Choi.

An advance team of World Health Organisation experts has arrived in China to help lay the groundwork for a larger team, officials from the organisation said Monday.

The team is led by Bruce Aylward, a Canadian physician and epidemiologist, who previously worked on the WHO's response to the 2014 ebola outbreak in West Africa.

"Bruce and his colleagues will be working with their Chinese counterparts to make sure we have the right expertise on the team to answer the right questions," Tedros Adhanom Ghebreyesus, the WHO director general, told reporters at a daily news conference. 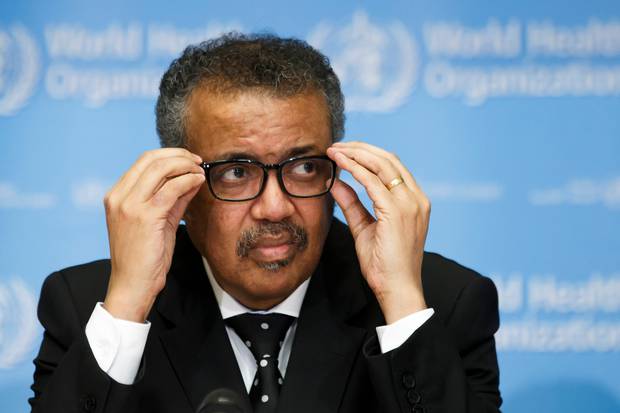 Tedros Adhanom Ghebreyesus, Director General of the World Health Organisation, says a team of experts has arrived in China to lay the groundwork for a larger team. Photo / AP

Officials from the WHO declined to be drawn into specifics about what Aylward's team would be doing in China, describing the members as medical professionals who would be given a large degree of autonomy to coordinate with local counterparts.

"The team is there first and foremost to learn," said Michael Ryan, executive director of the WHO health emergencies program.

Tedros had made a trip to Beijing for preliminary talks with President Xi Jinping and Chinese officials in late January, during which it was agreed that an international mission would be sent, but subsequent deliberations over its format lasted weeks.

Some public health experts have criticised the Chinese government for initially misleading the world about the threat posed by the outbreak.

"We were deceived," Lawrence Gostin, a professor of global health law at Georgetown University who also provides technical assistance to the WHO, told The Washington Post.

A new disease-transmission model created by University of Toronto researchers suggests that the coronavirus epidemic started in November, one month earlier than commonly believed.

The model uses open-access data to replicate epidemiological scenarios, allowing the researchers to test some narratives about the outbreak.

Although it is only a model, it may provide a plausible explanation for how the virus was able to spread so quickly - useful in the absence of hard evidence.

"You can't get up to that level of cases if the epidemic started in December even if you pushed the reproduction really high," David Fisman, a professor in the Dalla Lana School of Public Health and one of the model's creators, said in a statement.

In China on Monday, emergency service workers were soaking cars, buildings and airplanes with disinfecting spray in an attempt to eliminate the virus from the city of Wuhan, where the epidemic began. 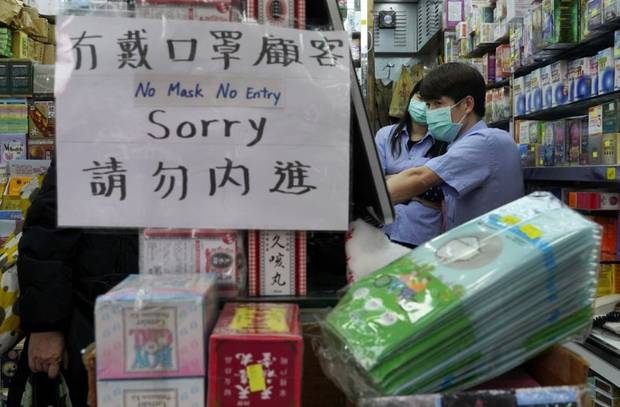 A sign on a pharmacy in Beijing, China. Photo / AP

It's unclear how effective the method is, especially considering that the entire region is under a travel lockdown and many people are not venturing outside.

Thus far, experts think the coronavirus is largely transmitted by close person-to-person contact and respiratory droplets. "Some coronaviruses can persist on surfaces, but I usually don't think of a street as a surface I worry about," Rivers said.

Hong Kong's Center for Health Protection announced early Tuesday that it would be evacuating some residents of an apartment building after two people were diagnosed with coronavirus, despite living in apartments 10 stories apart.

Officials said engineers from Hong Kong's housing department would investigate the sewage system in the building to see whether it could have been the source of the virus's spread.

During the 2003 SARS outbreak, more than 300 people were infected in the Amoy Gardens apartment complex in Kowloon, Hong Kong, eventually leading to a quarantine of the apartment complex. Officials later said that the outbreak had spread through bathroom drainpipes.

Some 3600 passengers and crew were allowed to disembark from a ferry quarantined in Hong Kong on Sunday after all 1800 crew members tested negative for the virus. It was feared the crew members might have come into contact with infected passengers on a previous trip.

In Washington, President Donald Trump said Monday that Xi reassured him that the cases of coronavirus are likely to dwindle during warmer months.

Trump made the remarks during a meeting with governors at the White House. He had spoken with China's leader on the phone Friday.

In Canada, the coronavirus will "undoubtedly" have a "real" impact on the economy, the country's finance minister said Monday. 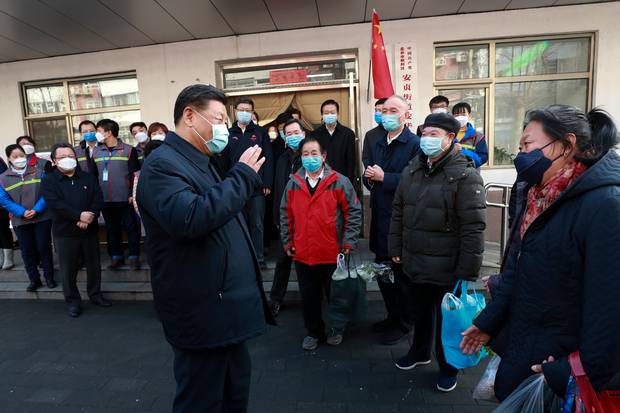 Chinese President Xi Jinping speaks to residents as he inspects the novel coronavirus pneumonia prevention and control work at a neighbourhood in Beijing. Photo / AP

Delivering a keynote address at a meeting of the Economic Club of Canada in Alberta, Bill Morneau said the virus is likely to disrupt supply chains and hit Canada's tourism sector. He also noted that oil prices have fallen 15 per cent since the outbreak began because of a decrease in demand and fewer flights travelling to and from China.

There have been seven confirmed cases of the coronavirus in Canada.

Russian health authorities are monitoring more than 20,000 people in their country for signs of the virus, including 6,000 Chinese citizens. Two cases of the virus have been found so far.

Russia's Federal Anti-Monopoly Service warned Monday of "economic looting" by retailers seeking to take advantage of the crisis, with a sharp increase in the cost of medical masks across Russia.

"The vast increase in retail prices for medical masks in 68 regions of the Russian Federation has all the indications of 'economic looting' during a period of increased demand," the FAS said in a statement.

Russian President Vladimir Putin said last week that pharmacies that price-gouged on medicines and medical masks should have their licenses canceled.

A top Chinese diplomat has been quarantined by Russian authorities as a safety precaution, Interfax news agency reported Monday.

The diplomat, Consul General Cui Shaochun, had arrived in Yekaterinburg on Thursday to take up his new post but had not yet met with any Russian diplomats, according to Interfax.

Li Ka-Shing, the richest person in Hong Kong with , has pledged a donation of US$12.9 million to help Wuhan, the city at the centre of the coronavirus outbreak.

The donation was made through the Li Ka Shing Foundation, which announced the news Monday that it would be making the donation "in support of the frontline healthcare professionals battling the Novel Coronavirus outbreak in Wuhan."

Li, who has an estimated net worth of US$29.4 billion, is one of Asia's best-known philanthropists. His charitable organisation is the second largest private and individual-led foundation in the world, after the Bill & Melinda Gates Foundation.

On Thursday, the Gates Foundation announced that it would commit US$100 million toward the global response to the coronavirus epidemic. A number of other wealthy figures have pledged money to help in the fight against the outbreak.

The Jack Ma Foundation, established by and named after the Chinese billionaire and co-founder of Alibaba Group, pledged US$14.4 million toward fighting the outbreak in late January. The funding will primarily go toward vaccine research underway at Chinese institutions.