The news that New Zealand has two new cases of Covid-19 has sent the public scrambling to get tested for the virus.

A queue of more than 50 cars was seen outside one Auckland testing centre this morning.

It follows Tuesday's announcement that two women had tested positive for the virus after flying in from the United Kingdom and travelling to Wellington to grieve the sudden passing of their parent.

The pair were allowed out of managed isolation at the Novotel Ellerslie in Auckland without being tested, but later tests in Wellington came back positive.

They reportedly did not use any public facilities during their drive and have only been in contact with people in the hotel and a family member. 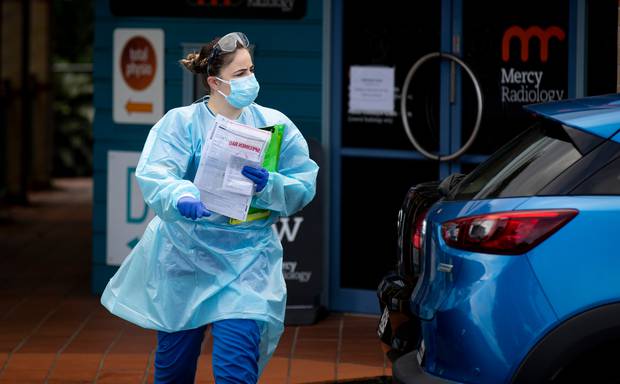 Health staff at a St Lukes Covid-19 testing centre have been kept busy today thanks to an influx of people keen to be swabbed for the virus. Photo / Dean Purcell

This morning the line of cars outside St Lukes' community assessment centre in Mt Albert stretched back past Taylors Rd. Normally there are 2-3 cars or fewer at the centre.

One man who'd brought his young son to be tested said it took around 1 hour 45 minutes end-to-end to get tested.

The boy had displayed many of the symptoms of the virus - including a runny nose, temperature and persistent dry cough - but his parents had been unable to see their GP yesterday.

"We tried to see the doctor yesterday afternoon but because of his symptoms we couldn't go see them. And they had run out of appointments so referred us to the White Cross - but it was the same thing there."

His wife had waited at least an hour at White Cross last night before giving up as no one could see them.

A nurse told him the uptick in people displaying symptoms was probably a case of the weather getting cooler and children picking up colds.

Despite the long lines he was impressed by the health staff at the testing centre.

"The nurse was great. When she's not doing testing, she's normally a kid's nurse. She was awesome."