An intensive care doctor has thanked everyday New Zealanders for supporting the Covid-19 vaccination effort in the past year, putting the health system in an 'incredibly fortunate' position.

Dr Alex Psirides works in Wellington Hospital's intensive care unit, where not a single Covid patient was admitted in 2021.

It's a fact he describes as 'bizarre', when you take into account the 'horrendous' effect Covid-19 has had on ICUs around the world.

'I just want to thank people. To thank Kiwis for being pragmatic for getting double vaccinated, for hopefully getting boosters when they're available to continue to protect intensive care, hospitals, and each other – celebrating the people who've done something positive to help us.

'And Aucklanders – what they did was heroic, remarkable. (Their lockdown) bought us time to get people around the country vaccinated. That's something that needs to be applauded.'

Psirides said we also owe a debt of gratitude to community leaders, district health boards, and the media for supporting the vaccination effort with campaigns like NZME's 90% project. 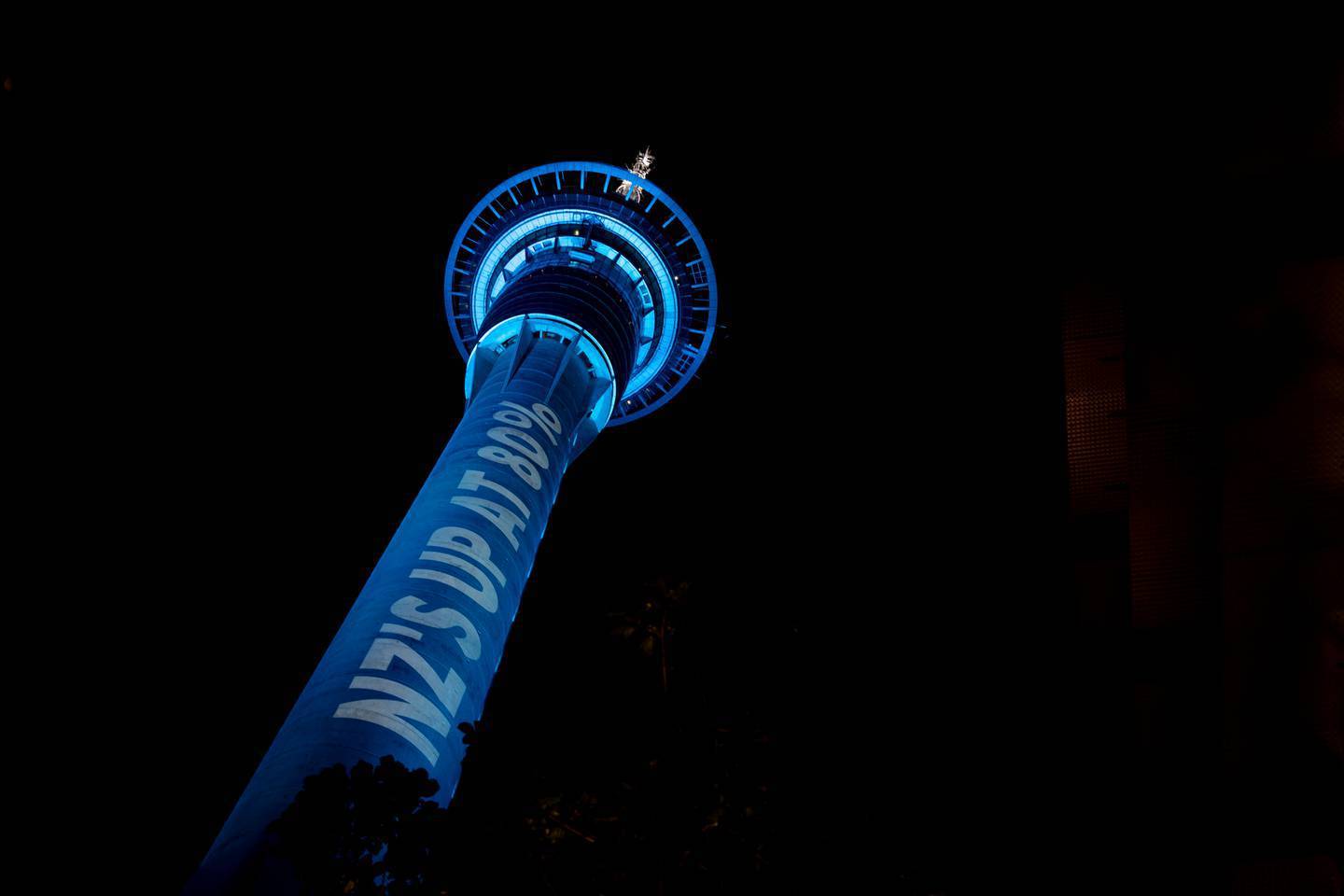 The Sky Tower was lit up in the colours of NZME's The 90% Project in November 2021, to celebrate the country hitting the 80 per cent fully vaccinated figure. Photo / Dean Purcell

Psirides is a spokesman for ANZICS, the Australian and New Zealand Intensive Care Society, and said the country as a whole ended the year in a unique position.

He said while our hospitals have been dealing with Covid, it's nothing on what we've seen overseas.

'I think the peak in Auckland was 11 patients in intensive care at the same time. But compared to intensive care units around the world, just purely within our profession, we have been incredibly fortunate not to have had the significant effects of Covid upon critically ill patients.

'We have been, I suppose almost spared, but I use that word very cautiously because it was more an intent to reflect back on 2021 than be deluded that this state will continue.' Psirides said there are a number of factors to thank for the situation New Zealand finds itself in during a global pandemic that's still raging offshore.

'It's not luck, it's simply decisions that were made, and our government for whatever reason chose to listen to the science experts who have advised a way through this.

'And that's by no means to diminish the people who have died and their whanau's grief for them. But we find ourselves in a strange situation internationally where we can look back and say it's remarkable from a past year perspective that we've not gone through this.' 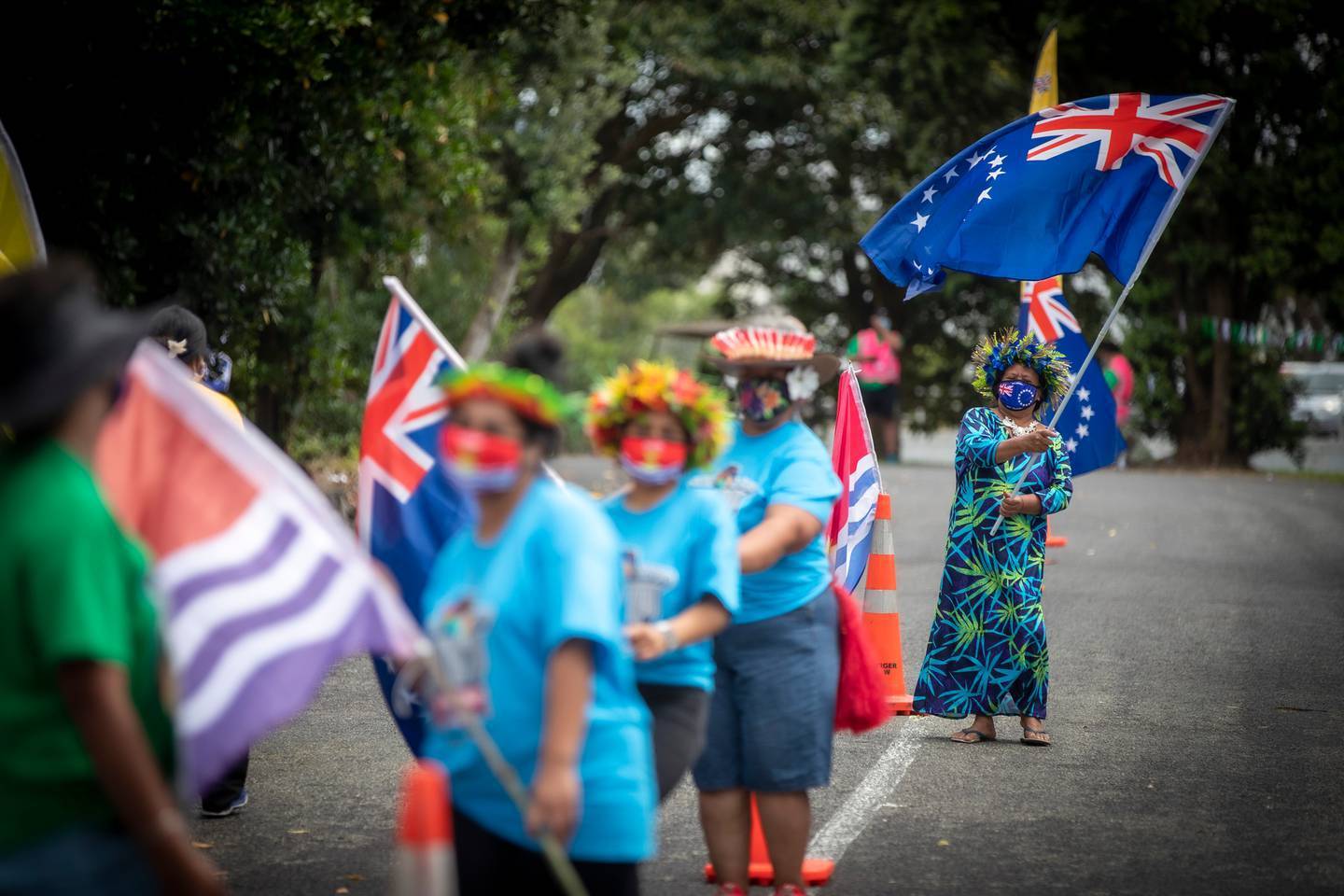 Psirides said we can thank the strong public health response, alert level restrictions and closed borders for effectively limiting the amount of Covid coming into the country.

'We have had a variety of people standing between the border where Covid has come in and the intensive care unit where we are the last defence as it were.

'The often-used description is that public health is the fence at the top of the cliff, and intensive care is the ambulance at the bottom of the cliff. By the time your intensive cares are full it's because all the things you've got between you and the border have essentially failed, and New Zealand has benefitted from a very large number of those interventions.'

Psirides said he felt fortunate to not have faced the difficult choices his international colleagues have in 2021. Choices like who to give a bed to, to save their life.

'A third of what we do is planned, so those are patients having major operations, mostly heart surgery, who would not have had that surgery able to go ahead because the beds would have been occupied by patients with Covid.

'In many countries you would've seen that those patients have been displaced by Covid because the doctors and nurses looking after them have had no choice. And many of the planned procedures that require intensive care have not been able to go ahead.

'So, there are people around the world who have been harmed by not being able to get their elective surgery done because the bed has been occupied by a patient with Covid, who would've died without that bed. 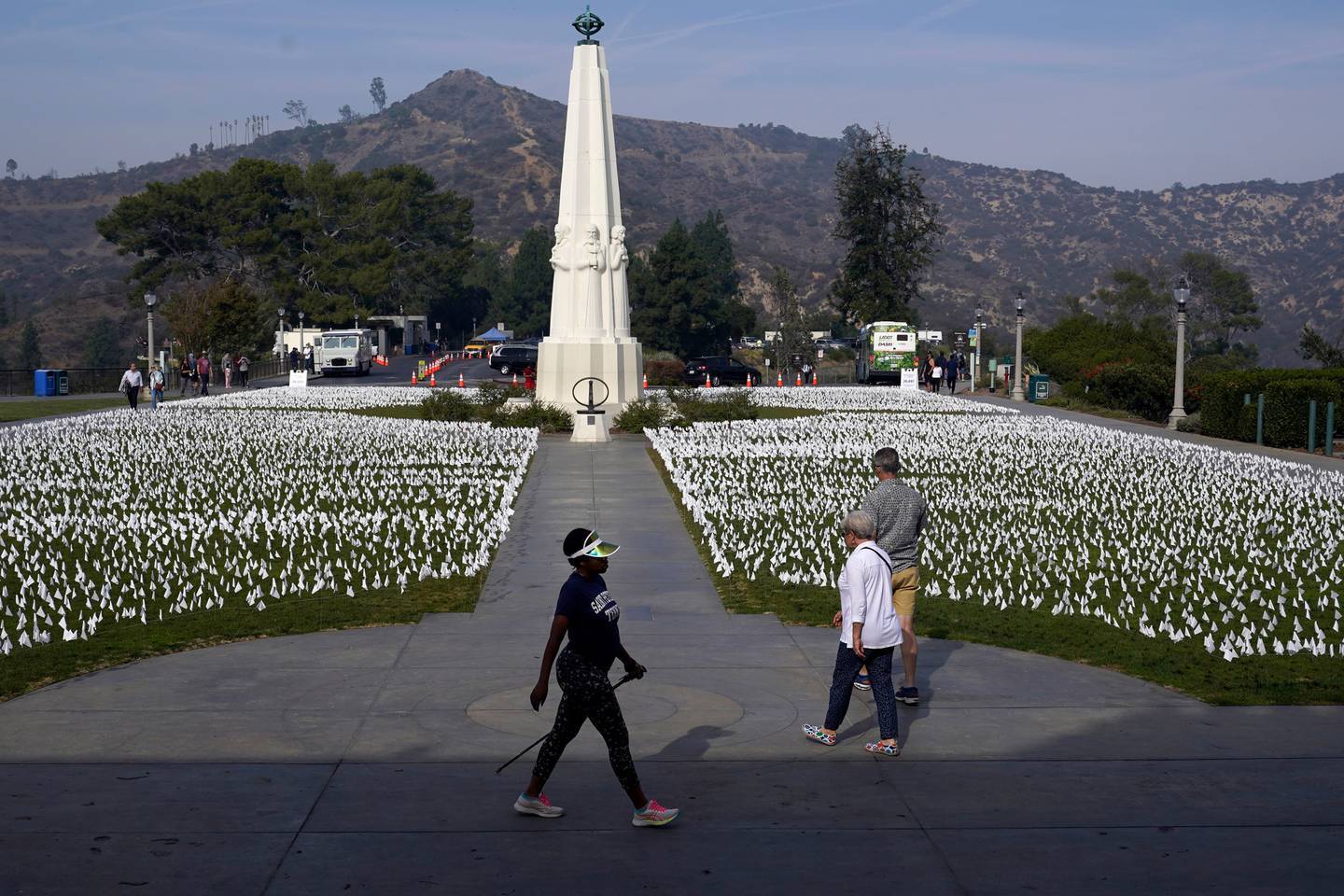 Visitors walk around a memorial for victims of Covid-19 at the Griffith Observatory, in Los Angeles. Photo / AP

'Those are very difficult choices that many of my colleagues around the world have had to make in terms of choosing who gets maybe the last ICU bed, or the last few ICU beds. And that's not a situation we've been in this year because of Covid, for which we are very fortunate.'

By the nature of what intensive care doctors do – treating the critically ill – Psirides said those in his profession are generally pessimists. But he said on the back of 2021, and with the preparation that's gone into Covid, he holds a small degree of optimism for the new year ahead.

'I wouldn't say I was overly optimistic but I think we're in a better place than we were a year ago, and I don't think it's maybe as bad as it could've been.

'The take home line is probably a small amount of optimism, which is an uncomfortable thing for an intensive care doctor to say.

'There's some early data coming out of South Africa and now some data coming from London that suggests that maybe if you're hospitalised your length of stay in hospital is less and that there are less people that will require intensive care.

'But that needs to be countered with a virus that clearly spreads much more rapidly and even if you only end up with a tenth of the people in intensive care, if you have twenty times more people who get the virus then that's still an increase in people that need intensive care.'

Psirides said there are a number of historical issues that also remain unaddressed, like the fact we started the pandemic with the second lowest number of intensive care beds in the OECD.

'So, we never had the ICU capacity to allow us to have coped with what would've been overwhelming in any circumstances. Any health care system with a lot more beds than us, the entire system has crumbled in areas that were hit the hardest. Northern Italy, New York, London – big cities in big countries that had a lot more intensive care beds than we did.

'We have still not greatly increased the intensive care capacity in New Zealand. We still don't have enough ICU beds. Could we ever have enough? I don't know the answer to that.' 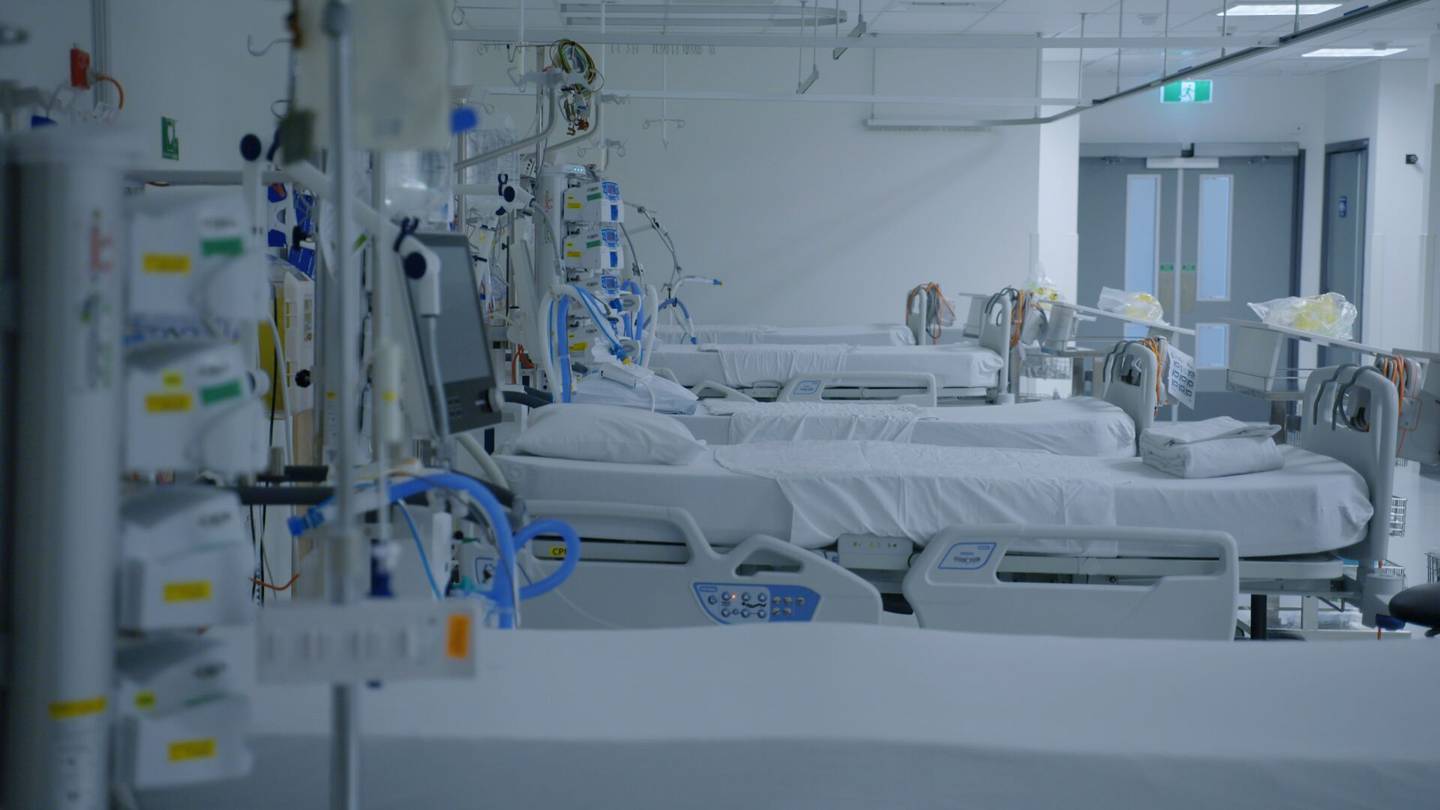 New Zealand started the pandemic with the second lowest number of intensive care beds in the OECD. Photo / File

Psirides said there is no doubt vaccination will play a key role in how New Zealand fares in the fight against Covid-19 in 2022.

'I don't think anyone would suggest that double vaccination is the cure for everything, but it undoubtedly puts us in a much better position than we were even a year ago, where we had no vaccination.

And while New Zealand may have been spared hospital rooms full of Covid patients in 2021, Psirides said that doesn't mean they haven't been preparing 'like crazy'.

He said we now have access to drugs that weren't available a year ago, new medications and new treatments, and we've been able to learn from the overseas experience.

'I think that generally will help kiwis when it's spreading throughout New Zealand in large numbers or intensive care is coming under the hammer, where we're going to need to use the techniques others have tried and learnt from.

'I'm more optimistic that we're better prepared for this than we were even six months ago, and certainly a year ago when we were moving from 2020 to 2021.'