Patients visiting loved ones and staff have paid more than $31 million in car parking fees at Auckland District Health Board hospitals in the past three years.

Advocates say sick patients undergoing life-saving treatment had often given up jobs to focus on their health and hefty hospital parking costs were an unwelcome burden.

Cash-strapped DHBs relied on parking fees to boost revenue, however access to healthcare was flagged as a major problem in the Government-funded review that led to the country's biggest-ever health shakeup.

"DHBs should be responsible for ensuring the mix of services is accessible to the population ... with transport options that ensure reasonable access," Heather Simpson said in her report.

Meanwhile, it's the country's most vulnerable patients being affected.

Michael Campbell, general manager at Kidney Health New Zealand, told the Herald it was a problem across the whole country and it was the low socio-economic patients who were being hit the hardest.

Dialysis patients who suffer from kidney failure could visit a hospital three times a week and be there for at least five hours, he said - which at Auckland City Hospital could cost them $57 a week, almost $3000 a year.

"If you're on dialysis you are also looking at not being able to work typically, so how do you afford that. It's totally unaffordable."

Cancer patient Jason Oxenham, a Herald photographer, said for three weeks his wife was visiting him every day - costing $400 in total.

"We didn't have too much of a problem with paying the fees but finding a park was a real problem. Cars were back up down the street outside the hospital."

Andrew Young, chief executive of the Cancer Society Auckland and Northland, said car parking fees had been the most commonly mentioned feedback and anxiety from cancer patients.

"We know lots of cancer patients give up work to undergo life-saving treatment, so the additional financial burden of having to pay for hospital parking is a major issue."

Almost $15m of that had been collected by Auckland DHB, which management said was "reinvested wisely", and the remainder went to investors and Wilson Parking, which managed the fees.

Of the money the DHB does collect, chief financial officer Justine White said those funds are "reinvested wisely".

"We put the funds towards our car-park infrastructure, such as on-site roading and signage, as well as providing off-site car parking options and shuttle services for our staff to free up on-site parking for patients and visitors."

The DHB recognised parking fees added up for patients and whānau, White said.

"We advise patients or close family members under financial pressure and needing our car parks for an extended period to please talk to their charge nurse, as we may be able to help."

Earlier this year, the Herald reported Auckland City Hospital needs about 100 more parking spaces to help meet demand. On weekdays it can take longer than 30 minutes to get into the grounds and to a car parking building.

The DHB last year investigated the cost and payback period for building another 500 car parks.

The cheapest option would be to extend Car Park B at a cost of around $44m, which would take between 35 and 38 years to pay off, based on current car park revenues. The renal dialysis unit would also need to be moved.

The four DHBs that make up the northern region – Northland, Waitematā, Auckland and Counties Manukau – made a case for a new hospital, possibly two, in their recent Northern Region Long Term Investment Plan.

Over the next 20 years nearly 60 per cent of New Zealand's population growth will be in Auckland and Northland, the report found, with medium growth forecasts predicting another 562,000 people in the region.

The number of people aged over 75 is expected to more than double in that time, and the northern DHBs predict another 2055 beds and 41 theatres will be required. 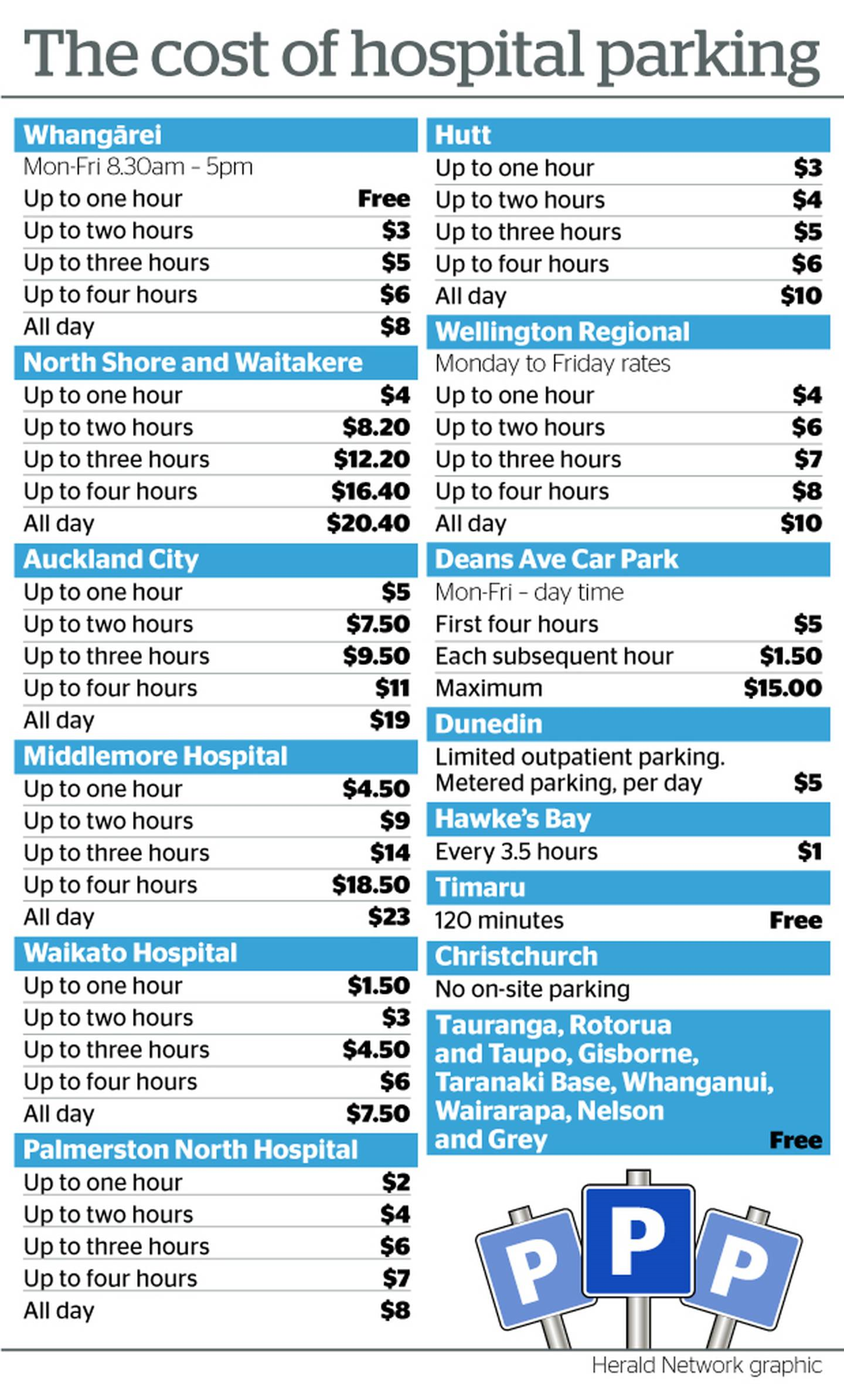 Karen Hutchins, 69, is chronically ill, unable to work due to her health and pays hundreds, sometimes thousands, of dollars on hospital car parking each year. Photo / Supplied

Karen Hutchins, 69, is chronically ill, unable to work due to her health and pays hundreds, sometimes thousands, of dollars towards hospital parking fees each year.

She has been a frequent hospital visitor since 1999. She suffers from arthritis, problems with her immune system, lungs, heart and "leukemia-like blood".

Earlier this year, she was rushed into intensive care after an infection caused her to have a heart attack.

She was there for three weeks and her family visited every day. In total, that alone cost them close to $420.

"On my last visit I had to drive myself and my car in the car park was left there for 24 hours before we could organise someone to come and pick it up and that's really expensive."

Back in 1999, parking was free and then Wilsons Parking took it over and it all changed, Hutchins said.

She was angry at the DHBs for not thinking about the impact parking costs were having on vulnerable patients, especially those with long-term illnesses, or who are at hospitals for long periods of time.

"In my eyes, if you have an outpatient appointment you shouldn't have to pay for parking ... the hourly rate alone is ridiculous.

"When you have appointments, of course you don't know how long you're going to be there and I don't think we should be paying if we have to be there."

In some circumstances, if patients go there in an emergency and have to pay for parking, that can be a massive problem, she said.

"Quite often you throw someone in the car, go to the hospital and you don't have any money with you.