New Zealand's hard-line elimination strategy against Covid-19 spared more deaths than any other developed country – and also brought economic results that were better than the OECD average.

That's according to a new analysis that again suggests a zero-tolerance approach to Covid-19 delivers the best benefits for both public health and the economy.

But now, the researchers say, New Zealand and its bubble buddy Australia need to decide what their long-term plan will be.

"This analysis shows what New Zealand did to protect health worked amazingly well, and it was also quite good for its economy relative to other OECD countries as well."

While New Zealand and several other countries were able to act in time to eliminate the virus, other nations in the OECD (Organisation for Economic Cooperation and Development) were forced to choose strategies, namely suppression or mitigation, which yielded poorer results against Covid-19.

The study noted how New Zealand had the lowest cumulative Covid-19 death rate in the 38-nation group – 26 deaths, or 5.2 per million of population – which was 242 times lower than the OECD average.

In terms of "excess deaths" – or those from all causes during a crisis that were above and beyond those expected under normal circumstances – New Zealand had the largest negative value in the OECD, and equivalent to around 2000 fewer deaths than expected.

An earlier analysis by Wilson and colleagues had also found there were 548 fewer deaths over the first half of last year, compared with the same period in 2019.

"That's probably due to fewer deaths from things like seasonal flu and community-acquired pneumonia, but until the deaths are properly coded in the Ministry of Health's datasets, we won't really know what has contributed to this very impressive reduction," Wilson said. 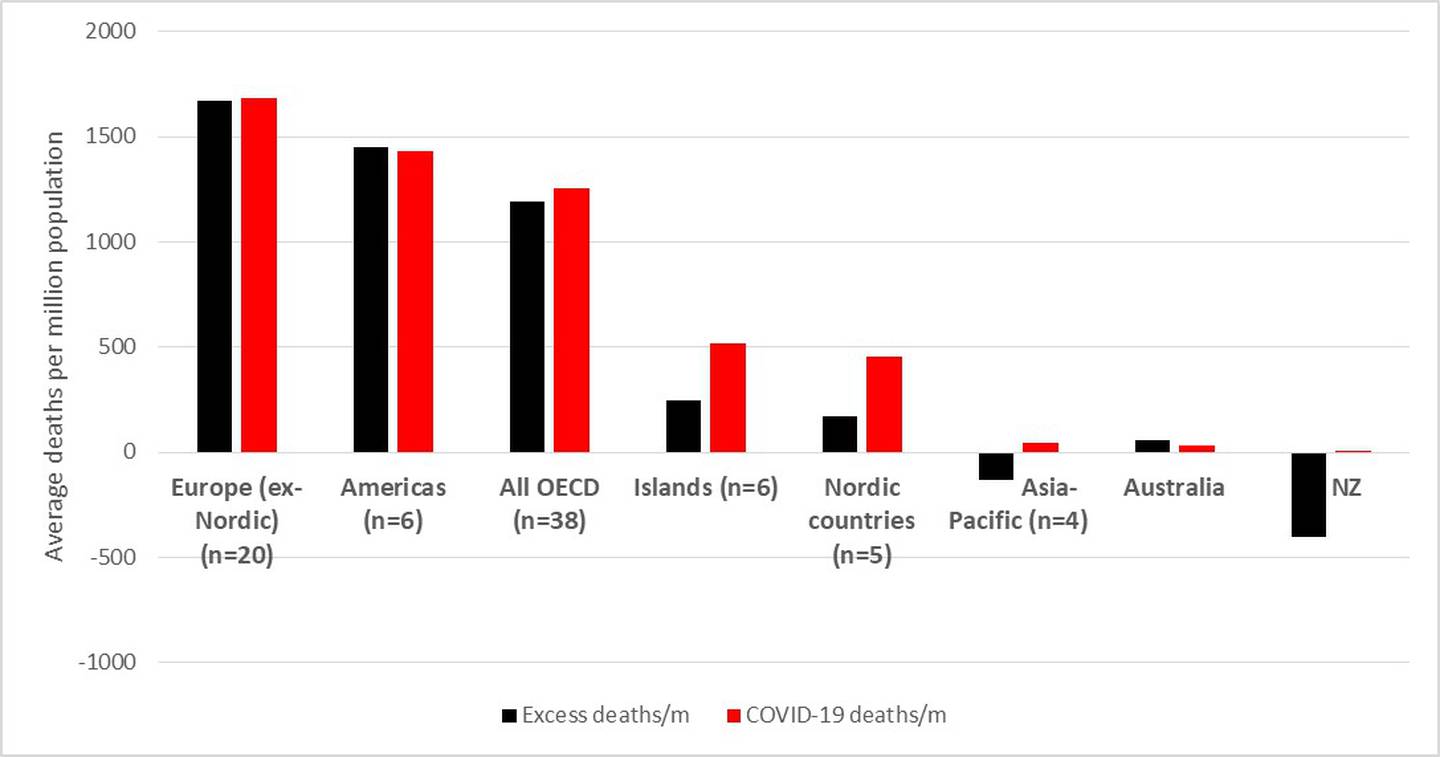 Australia had the second lowest death rate in the OECD, although it still came in at seven times that of New Zealand's, at 36 per million of population.

The study authors also estimated that, as at last month, and compared to the OECD average death rate from Covid-19, New Zealand avoided around 6430 deaths from the pandemic.

The researchers also considered the benefits using "quality-adjusted life years", or QALYs, which are a generic measure of disease burden, including both the quality and the quantity of life lived.

Based on QALY loss due to premature death from Covid-19, the country's response prevented the equivalent loss of around 38,100 QALYs.

The study acknowledged New Zealand's tactic still came at a large economic hit, largely through effectively closing the country to international tourists, students and workers, and mainly in the first half of last year.

In the second quarter of 2020, for instance, GDP was down more than 10 per cent on the previous quarter, while unemployment levels rose to 5.2 per cent in the third quarter of the year – up 1.1 per cent on pre-pandemic levels.

Yet, the year also saw an economic rebound starting from the third quarter, when GDP was up nearly 14 per cent on the previous one, while the first quarter of 2021 saw positive growth of 1.1 per cent above average.

Going by GDP change over five quarters since the start of the pandemic, New Zealand proved the OECD's sixth best performer – at 0.5 per cent vs the OECD average of -0.3 per cent – behind Ireland, Turkey, Chile, Luxembourg and Estonia, and just ahead of Australia. 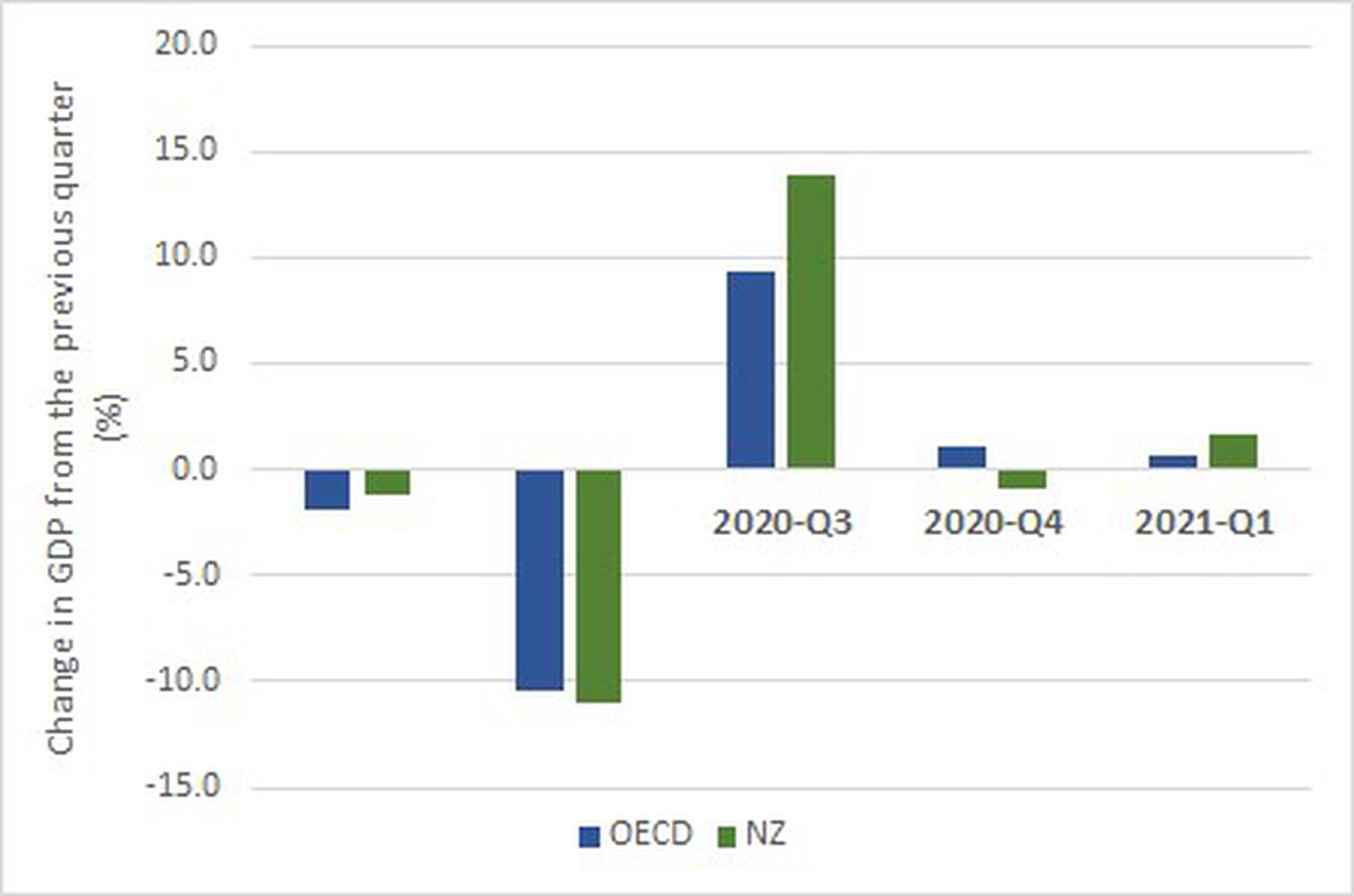 "Although comparisons at GDP level can be a bit crude, it really is surprising that New Zealand has done so well here," Wilson said.

"In many ways our economy must be more flexible and adaptable than what people thought."

As at first quarter of 2021, New Zealand's unemployment rate had also dropped below 5 per cent – a result that came in at the ninth lowest of 34 OECD countries with comparable data.

The study authors pointed out that while New Zealand had the geographic advantage of being an island nation, they said factors like political commitment, evidence-backed policy, a good public health system, and public trust also played a part.

Wilson told the Herald that the analysis highlighted the value of taking an elimination approach so far in the pandemic – but its benefits worked out over the longer term remained to be seen.

That could include accepting Covid-19 as an "endemic infection", with ongoing vaccinations to protect the most vulnerable, as is done with flu, or possibly preferably using an approach called "sustained elimination".

That would rely on high vaccination coverage and strong public health measures, as was done with eliminating occasional outbreaks of measles from imported cases. 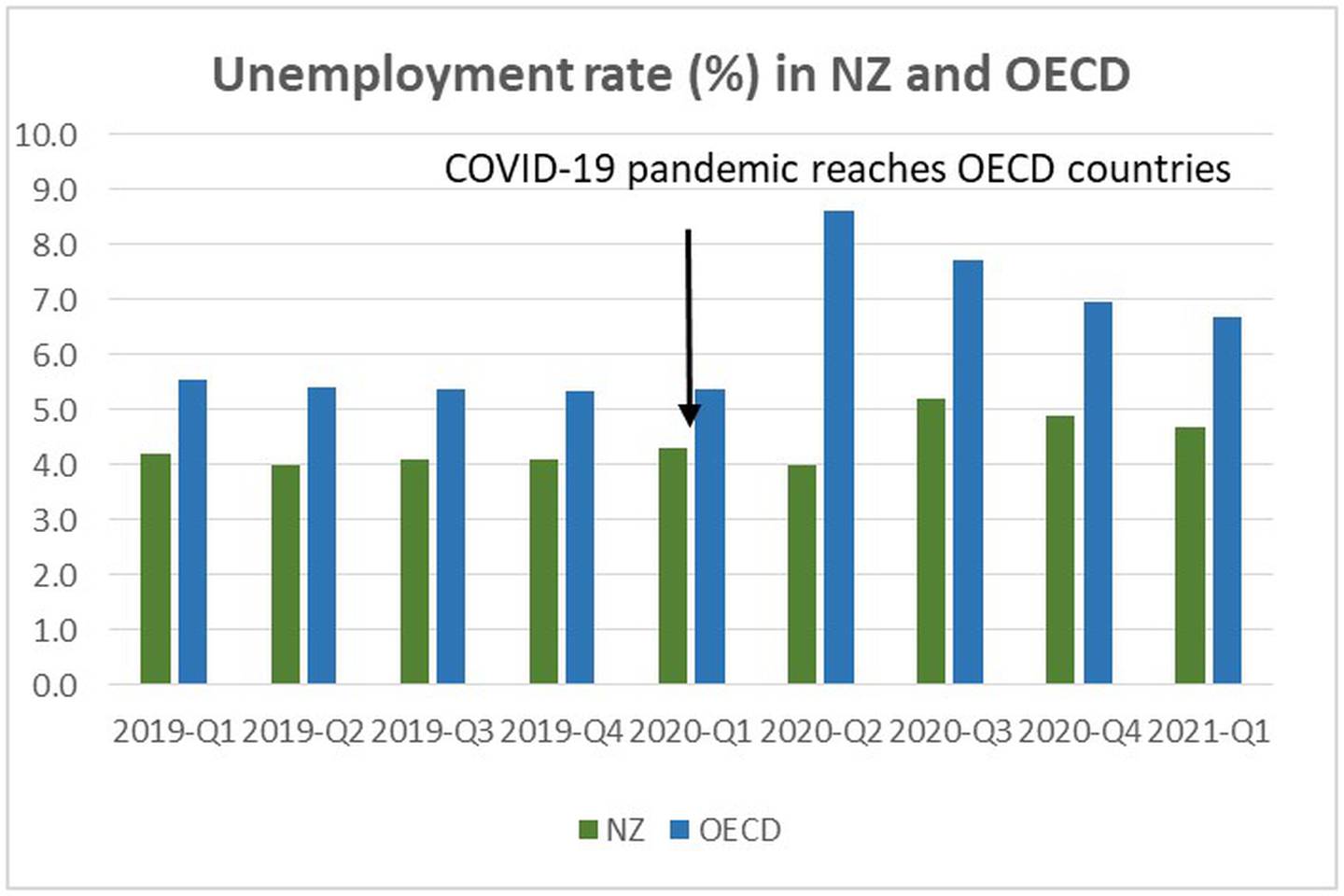 "There is even the possibility that the global community will adopt a Covid-19 goal of progressive elimination leading to global eradication," the researchers said, "and then New Zealand and Australia could be part of expanding quarantine-free travel zones of other countries that have succeeded with elimination".

The analysis, published online ahead of peer review, wasn't the first to trumpet the success of elimination.

One recent study led by Kiwi epidemiologist Professor Tony Blakely, now at the University of Melbourne, also found the short-term pain of New Zealand's "go hard, go early" plan was the worth the long-term gain, with far fewer deaths and hospitalisations, and a similar economic cost to less-aggressive options.

Another modelling study by Te Punaha Matatini researchers found that 200 Kiwis may have died had the Government held off ordering the nationwide lockdown only for another three weeks - while nearly 12,000 people may have been infected.

Meanwhile, researchers have found lockdown was still a stressful, anxious and hungry time for New Zealand's most vulnerable.

In a paper published in the New Zealand Medical Journal, Otago University researchers explored the experiences of 27 Kiwis on low incomes, to find many had to lean on charities - even with higher welfare payments.

While the Government moved to offset the economic pain of New Zealand's elimination strategy with its Covid-19 wage subsidy, allowing employers to keep paying staff over lockdown, the number of working-age people signing up to benefits between March and April was almost double that of the past 24 years for the period.

Hardship Assistance payments also climbed sharply, food banks reported a 100 per cent increase in demand during the lockdown period, and charities aired worries over the rising number of Kiwis seeking support due to unemployment.

Immediately after lockdown lifted, the researchers set out to survey a group of poorer Kiwis to see how they'd fared.

"They don't usually have a voice in the public conversation, but in outbreaks and pandemics they often experience the heaviest impacts," said study author and Otago epidemiologist Dr Amanda Kvalsvig.

The research team asked them about their access to services and healthcare, and what advice they had for the Government as a result of their experience.

"The participants told us of feeling cold, hungry, isolated, and anxious about their own situation and about their whānau," Kvalsvig said.

"They struggled to access the services they needed and were sometimes treated disrespectfully when they asked for help."

While most reported coping financially while still experiencing financial stress, many had to juggle spending with paying the bills.

Despite the Government bumping up the Winter Energy Payment, the researchers found much of the financial difficulties came from covering power bills, which, due to the larger number of people staying at home, was more expensive.

Some told of their difficulty accessing food banks – and one person who was homeless, and with no address or petrol for their car, was forced to survive mainly off bread and water for the entire lockdown.

Another said: "I was just stressing out, hard out, stressing all day every day, just over food really, especially after having nothing, no help from anyone."

The majority of participants found lockdown had a negative effect on their mental wellbeing – namely from boredom, confinement, emotional volatility and isolation.

The researchers found people felt isolated from their whānau, their communities and the day-to-day social interactions they had from their usual activities that they could no longer pursue.

One person said: "I would never want to be put in that situation ever again because that was hard, it was very stressful… when we need to see our families, they won't open the door for us."

"For me, it was particularly poignant to hear participants' comments that life under lockdown wasn't all that different from their life before the pandemic," Kvalsvig said.

"You need a certain level of income to participate in New Zealand society and people on low incomes are to a large extent locked out of all that. All they can do is stay home - if they have a home at all."

She said one positive take-away was that the participants still supported the Government's aggressive stance toward the virus, and felt its decisions were clearly communicated.

Yet, the research still highlighted many critical areas for improvement.

"The participants' recommendations indicated that the types of support available during lockdown were on the right track, but the supports need to be strengthened," Kvalsvig said.

"For example, the additional benefits and payments introduced by the Government were helpful, but they didn't go far enough and community organisations like food banks were having to fill in the gaps."

"Whatever the pandemic situation, everyone needs to have food security, a safe home, enough income for basic needs, and access to healthcare.

"This is how population resilience works – people can draw on these essential resources to sustain wellbeing, even during a public health emergency.

"Providing for these basic needs must be woven into our alert level system, with the support stepping up along with the alert level."

"We produce far more food than we need, so hunger should never have been an issue. We urgently need to build food security before the next public health emergency arrives," she said.

"It won't matter how good our public health systems are if people can't eat. Even better is food sovereignty, where communities determine how they eat."