A sharemilker watched in awe from his tractor as a giant tornado formed near Hamilton.

Sam Owen, who lives at Eureka, was heading west along State Highway 26 in his tractor when he spotted the strange cloud formation in the distance.

"I was really weird. I didn't really know what it was until I got a photo of it just as it was reaching down and it just kind of pulled out and all of a sudden it started to suck out what looked like soil or dust into the atmosphere."

He said the tornado touched down east of Hamilton, near State Highway 1B, about 12.45pm today.

"I stopped at the intersection there and got out of my tractor because I was on my way to do some work and took three photos," he said.

"The first one sort of shows its spoke coming down."

This funnel cloud was spotted from Silverdale Rd, east of Hamilton, around 1:00 pm this afternoon!

The next two photos show the dramatic moment the tornado rips, what he believes is, soil out from the earth.

Owen said he watched the twister for about two or three minutes.

"You just don't expect to see one while driving down the road."

Wintec student Tawny Madison was driving home when she came across the twister on Holland Rd before pulling over and capturing a short video.

"I was just driving home from Wintec and saw it crossing Holland Rd. It was pretty shocking as I've never seen a tornado that close to home before."

Dairy NZ Farm manager Ben Fisher was heading back to the office at the Vaile Rd farm to escape the rain when he spotted the tornado about 300 to 400 metres away.

Fisher said it looked about 50m wide at the bottom.

"At the bottom it was spinning quite slowly and then at the top it was really spinning quite fast. It was quite a bit narrower, but you could see it spin."

The dark clouds were moving really fast, he said.

He and another worker stood in the office observing it and said it lasted between 5 and 10 minutes.

"It was quite interesting. A bit unexpected for today."

Kurt Hogwood was relaxing in the spa pool at his Holland Rd home when an intense gust of wind that came from nowhere.

Dust, dirt, leaves and sticks flew past him just after midday.

"It was normal like this and then heaps of wind."

The howling wind lasted about 10 to 15 seconds and was then dead calm again.

The tornado swept through the family property from Ruakura in the direction towards Morrinsville.

The only evidence of the twister going through the property was the dirt and leaves now lying on the bottom of the spa pool.

WeatherWatch.co.nz says more isolated tornadoes are possible this afternoon in the upper North Island due to instability in the atmosphere, plus warmer than average weather. 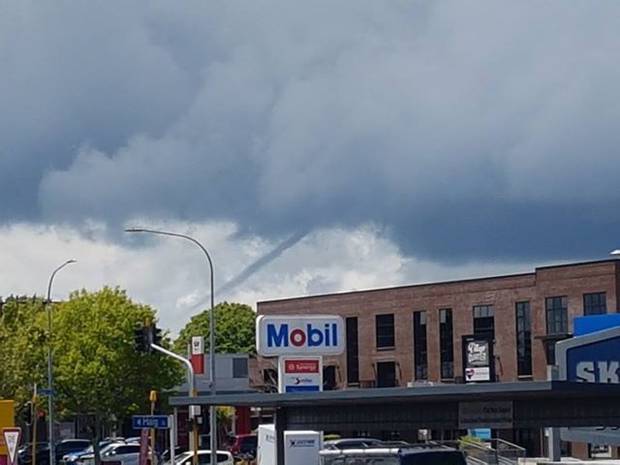 There is also the risk of isolated thunderstorms.

"You just don't expect to see one while driving down the road."

"Downpours are likely to come on very quickly and end just as fast. Surface and flash flooding are both possible in localised areas," the forecaster said.

Fire and emergency northern shift manager Megan Ruru said they were not called to the incident.

A Marshmeadow Rd resident said she had never seen clouds move so fast. The tornado lasted five minutes and gradually got bigger, she said.

"I saw the start of a small tornado in the clouds. You could see the clouds swirling.

"I have never seen clouds swirling so much then there was a bit of lightning coming out of it. The tail got longer - it was a twister."

Sam Owen, who lives at Eureka, was heading west along State Highway 26 in his tractor when he spotted a strange cloud formation in the distance.