The shots fired during a fatal shoot-out with police in Hamilton were so loud and punishing, they reverberated through Carol Thompson's home.

And, they came from a military-style semi-automatic firearm.

Thompson told the Herald the windows of her O'Donoghue St home vibrated after several shots were fired by a man, who sources have confirmed as Joel Buckley, at police who had come to check on his welfare on Wednesday night.

"It was really, really terrifying," Thompson said, as she recalled the incident in the suburb of Hillcrest.

Five shots were fired from his weapon, however Chambers wouldn't confirm how many shots were fired by police. Many neighbours spoken to believed they heard about 10 shots; fired in quick succession.

Police had gone to the property with concerns for Buckley's safety after being told he was in possession of a firearm and was possibly going to use it.

Thompson said she definitely heard five shots from one weapon before hearing two others.

"There were five shots, three of them from right outside my window and two after.

Thompson said she was barely metres from Buckley, in her house, when he fired his shots and could tell the difference when shots were fired from a second, different weapon.

"There were [two] more but I don't think it was from the same gun."

Thompson had been watching television in her lounge. The noise of the gunshots gave her such a fright, she jumped up, grabbed her cellphone and began dialling 111 before she peered through her lounge room curtains, looking out over O'Donoghue St.

"I'm right across the road from where it was happening. I was sitting in my lounge and he must have been just down below my window from when he fired the first shot across the road.

"It was really, really loud. I thought he was crashing into my house.

"I thought someone was attacking my house actually, because the wall, and glass, vibrated, with the shots of it ... where I was standing, I could feel the vibrations from it."

As she peered out between a small gap in her curtains, she could see a vehicle which she initially thought was a taxi.

"By that time the gunshots had stopped and I saw across the road, parked in the driveway for the flats, what looked like a taxi.

"I thought they were trying to shoot someone inside the taxi but I couldn't see any people.

After about five or six seconds of silence she then heard shouting. 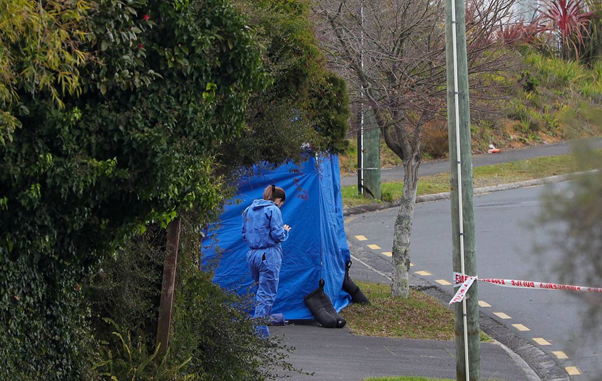 A blue tent was set up on O'Donoghue St, near the University of Waikato in Hamilton, where a man was shot and killed after a stand-off with police on Wednesday night. Photo / Mike Scott

"I heard lots of shouting, there was more than one person shouting.

"It seemed as though there was an altercation but I believe it was the police telling the person to come out but he didn't respond."

As this was all happening, Thompson was on the phone with police giving a verbatim account of what she could see.

"My impression was that the shouting went on where the police car was and that's where all the gunfire was."

Thompson believed there were slight gaps in between the firing of the first five shots; which were loud and slightly slower.

"The shots were massive. I have heard fireworks and heard people breaking glass.. but this was something else. It was a huge bang, bang. It was obviously something major."

Thompson estimated it was about 15 minutes before more police, including the armed offenders squad turned up, and then "all hell broke loose" with the police Eagle helicopter also circling above.

"Everyone seemed to turn up at once, ambulance and police."

She said she had been shocked by the amount of gun violence in New Zealand recently - including the three shootings involving police the past week - and had sympathy for officers.

Police forensic staff remain at the scene on O'Donoghue St today, with a smaller cordon still in place.