New footage of Will Smith's now infamous slap has shed light on his wife's reaction to him hitting Chris Rock.

The video, shared on TikTok, appears to show Jada Pinkett Smith laughing at comments made by Rock in the wake of him being struck.

Up until now, commentators have suggested Smith attacked the comedian after noticing his wife's apparently upset reaction to a joke referring to her alopecia condition, which has left her with no hair.

But the clip appears to suggest she did find some of what the comedian said to be funny.

This is the first time I am seeing the Will Smith incident from this angle… apparently shot by a fellow attendee sitting in the orchestra… interesting stuff. pic.twitter.com/xXFtwl8uPk

Jada can be seen throwing her head forward in laughter as Rock responds to being slapped by saying: "Will Smith just smacked the sh*t out of me."

She also appears to laugh as Rock awkwardly tries to move on from the incident by saying the audience have witnessed "the greatest night in the history of television".

A short time later, Smith won the Best Actor award and broke down in tears during his acceptance speech.

"Richard Williams was a fierce defender of his family," Smith began, speaking of Venus and Serena Williams' father, whom he plays in the biopic.

"In this time in my life, in this moment, I am overwhelmed by what God is calling on me to do and be in this world.

"I'm being called on in my life, to love people and to protect people. And to be a river to my people."

Smith did not apologise to Rock immediately after the event and was seen partying at a private post-Oscars event shortly after.

Rock briefly addressed the elephant in the room on Wednesday as he took to the stage at the Wilbur Theatre for his first of five sold-out shows.

According to People, he received a lengthy standing ovation when he took to the stage, before telling the crowd he already had a series of jokes lined up and would address the infamous Oscars slap "at some point".

"What's up, Boston? How was your weekend?" Rock said onstage, which was met with laughter from the crowd.

"I don't have a bunch of s*** about what happened, so if you came to hear that, I have a whole show I wrote before this weekend. I'm still kind of processing what happened. So, at some point I'll talk about that s***. And it will be serious and funny."

In another bombshell twist to the saga, the Academy on Thursday revealed Smith was asked to vacate the Dolby Theatre after "the deeply shocking, traumatic event", but the King Richard star stood his ground and went on to receive his Oscar.

In a statement released today, the organisation admitted "things unfolded in a way we could not have anticipated", while detailing what happened in the room. The statement also included an apology to Chris Rock.

"While we would like to clarify that Mr Smith was asked to leave the ceremony and refused, we also recognise we could have handled the situation differently," it read. 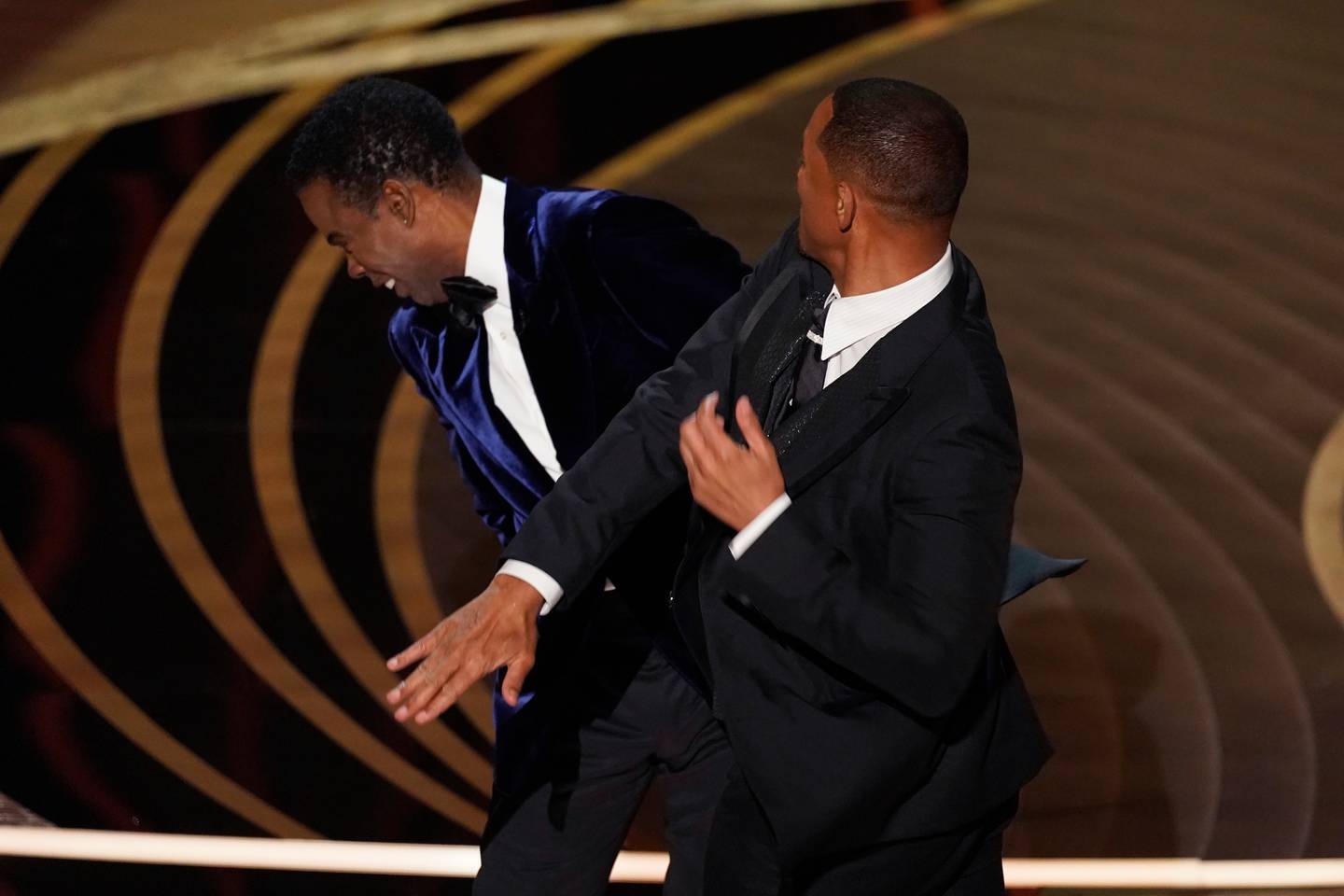 Will Smith hits presenter and actor Chris Rock on stage while presenting the award for best documentary feature at the Oscars. Photo / AP

As reported by Deadline, the Academy of Motion Picture Arts and Sciences' Board of Governors have given Smith "15 days' notice of a vote regarding his violations and sanctions, and the opportunity to be heard beforehand by means of a written response".

It comes after an initial vote was overwhelmingly in favour of taking the matter further.

According to Deadline, the Academy could also decide to press charges against Smith, even though Rock declined to file a police report.

The Academy announced it was going to "explore further action and consequences in accordance with our Bylaws, Standards of Conduct and California law".

The news came after reports of a furious top-secret Zoom meeting held after the ceremony in which some members of the Academy demanded the Men In Black star be booted from the prestigious organisation.

On Twitter, in the early hours of Monday morning, they said: "The Academy does not condone violence of any form.

"Tonight we are delighted to celebrate our 94th Academy Awards winners, who deserve this moment of recognition from their peers and movie lovers around the world."