Before she hit the big time, American actress and comedian Tiffany Haddish was an Air New Zealand employee who liked to dance with passengers, according to her former boss, Sacramento-based Kiwi Rodney Samuels.

Appearing on US talk show, Jimmy Kimmel Live!, Haddish was reunited with Samuels who was dialled in as a surprise guest from Haddish's past. 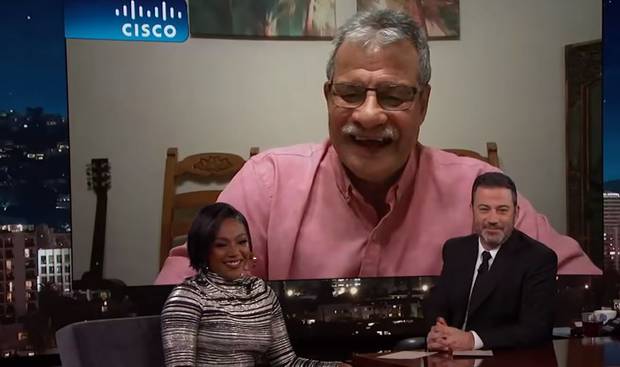 The Like A Boss star recognised him from a line up of strangers but couldn't recall his name.

"I do not remember his name. I know I used to be like, 'Heyyyy'," she told Kimmel giggling.

"His laugh. I know that laugh and his smile."

Speaking to the Herald from his home in California, Samuels said he and Haddish went through training together.

" ... We were both new to working in the airport. I had a massive heart attack three days into the training and I went into intensive care for about two weeks, and when I got out Tiffany was still there at the time before she decided to move on to Alaska."

In his appearance on the show, Samuels was asked what kind of employee Haddish, then 18, was. He told Kimmel she was "overflowing with confidence".

"... as young as she was, she was just overflowing with confidence. She basically took charge of things. We used to love to get her up to the arrivals lounge, so she had a PA system. I think that's where she developed her skills with her comedic stuff ...

"She made our passengers feel great and when she had a little more time on her hands she even got to dance with them as well, robot and pop-locking - you name it, she did it."

An incredulous Kimmel asked Haddish: "People were waiting for their flights and you were pop and locking?"

Recovering from a fit of laughter, Haddish shared that she worked in the transit lounge where "sometimes the flights would be delayed. I used to love making announcements like, 'Air New Zealand flight 357 service to Frankfurt is delayed!'"

She said when passengers told her they were bored she'd offer to perform a monologue for them.

"Sometimes I would bring my little radio, I would play some music and I would put the PA system up to the speaker and I would start dancing," she said erupting into a fit of laughter along with Kimmel's audience.

"I just wanted everybody to be happy and I wanted to get a raise."

Samuels told the Herald appearing on the show was "such a thrill".

"And my kids and grandkids in New Zealand were blown away."

Having recently celebrated his 70th birthday back home at Auckland's Northcote Rugby Club, Samuels shared that he "got a lot of stick from my rugby buddies" but says the experience is one he'll "keep in the memory bank."