Fans of The Chase prepare yourselves — the smash-hit show is facing a "proper shake-up".

They're the words of host Bradley Walsh who spoke to the UK's Radio Times while the quiz phenomenon is on a between-season hiatus.

Walsh, a former comedian who has become one of the most popular figures on British TV, said that might extend to multiple new chasers — the term for the general knowledge experts who try to "catch" the members of the public competing for big cash prizes by answering more correct questions than them.

Walsh told RadioTimes they are "making more and more shows all the time, so we need to recruit more people all the time… we have put our feelers out to find other people that will be suitable… all will be revealed next year."

So does that mean multiple new faces?"It could be more than one, who knows. But it's a proper shake-up," Walsh said.Five chasers are on the show so far — The Vixen, The Beast, The Sinnerman, The Governess and The Dark Destroyer, aka Shaun Wallace, who is currently in New Zealand. 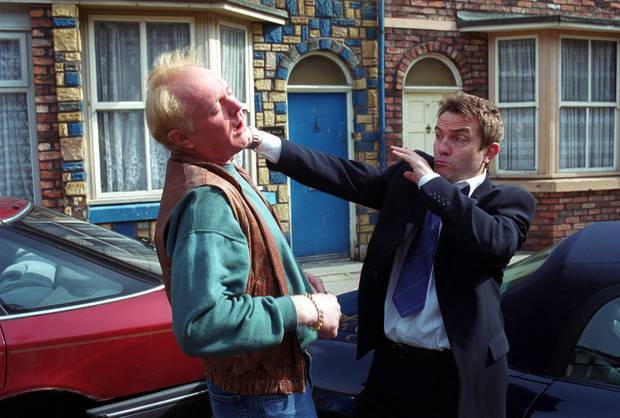 Bradley Walsh played Danny Baldwin in Coronation Street. Here's a flashback to an altercation he had with character Les Battersby. (Photo / Supplied)

Here, The Chase screens on TVNZ One. The channel will also show Doctor Who, in which Walsh plays Graham, one of The Doctor's companions, which is expected to return very early in the New Year. It will also air Breaking Dad, a road trip Walsh takes across the US with his son Barney.

Walsh told Radio Times the next series of Doctor Who contained new monsters that are "absolutely terrifying — and I mean terrifying".

Rarely off British screens, he also hosts another quiz show, Cash Trapped, which he developed but which doesn't screen here. Walsh described it to Radio Times as a "soap opera with quiz questions".

"It's got a whole narrative running through it and if people don't win they can't leave."