Charlie Watts, the self-effacing and unshakeable Rolling Stones drummer who helped anchor one of rock's greatest rhythm sections and used his "day job" to support his enduring love of jazz, has died, according to his publicist. He was 80.

Bernard Doherty said Tuesday that Watts "passed away peacefully in a London hospital earlier today surrounded by his family."

"Charlie was a cherished husband, father and grandfather and also as a member of The Rolling Stones one of the greatest drummers of his generation," Doherty said.
Watts had announced he would not tour with the Stones in 2021 because of an undefined health issue.

Elton John and The Beatles' drummer Ringo Starr were among musicians who led tributes.

The quiet, elegantly dressed Watts was often ranked with Keith Moon, Ginger Baker and a handful of others as a premier rock drummer, respected worldwide for his muscular, swinging style as the Stones rose from their scruffy beginnings to international superstardom. He joined the band early in 1963 and remained over the next 60 years, ranked just behind Mick Jagger and Keith Richards as the group's longest-lasting and most essential member.

Watts stayed on, and largely held himself apart, through the drug abuse, creative clashes and ego wars that helped kill founding member Brian Jones, drove bassist Bill Wyman and Jones' replacement Mick Taylor to quit and otherwise made being in the Stones the most exhausting of jobs.

A classic Stones song like Brown Sugar and Start Me Up often began with a hard guitar riff from Richards, with Watts following closely behind, and Wyman, as the bassist liked to say, "fattening the sound." Watts' speed, power and time keeping were never better showcased than during the concert documentary, Shine a Light, when director Martin Scorsese filmed Jumpin' Jack Flash from where he drummed toward the back of the stage.

The Stones began, Watts said, "as white blokes from England playing Black American music" but quickly evolved their own distinctive sound. Watts was a jazz drummer in his early years and never lost his affinity for the music he first loved, heading his own jazz band and taking on numerous other side projects. 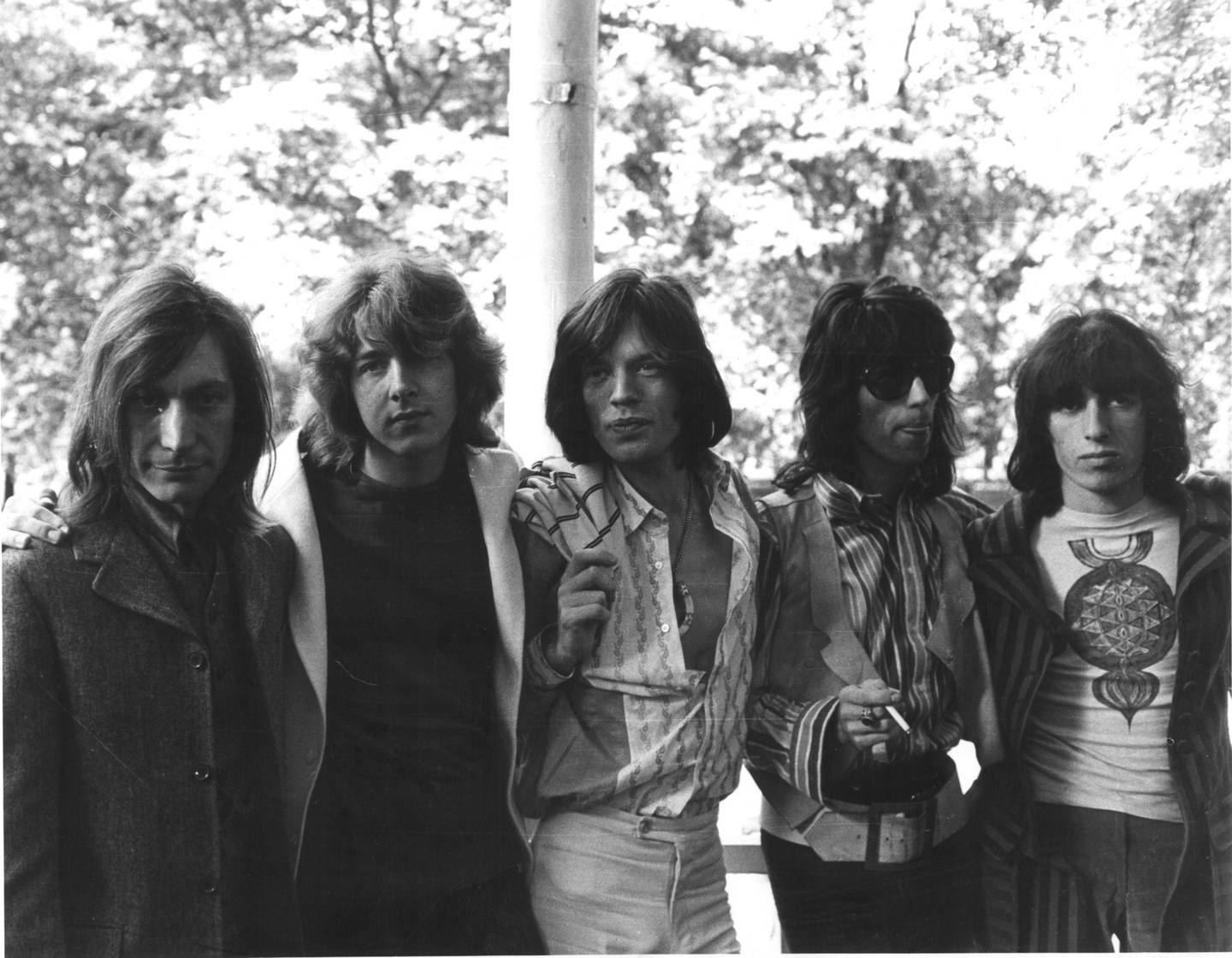 He had his eccentricities — Watts liked to collect cars even though he didn't drive and would simply sit in them in his garage. But he was a steadying influence on stage and off as the Stones defied all expectations by rocking well into their 70s, decades longer than their old rivals the Beatles.

Watts didn't care for flashy solos or attention of any kind, but with Wyman and Richards forged some of rock's deepest grooves on Honky Tonk Women, Brown Sugar and other songs. The drummer adapted well to everything from the disco of Miss You to the jazzy Can't You Hear Me Knocking and the dreamy ballad Moonlight Mile.

Jagger and Richards at times seemed to agree on little else besides their admiration of Watts, both as a man and a musician. Richards called Watts "the key" and often joked that their affinity was so strong that on stage he'd sometimes try to rattle Watts by suddenly changing the beat — only to have Watts change it right back.

Jagger and Richards could only envy his indifference to stardom and relative contentment in his private life, when he was as happy tending to the horses on his estate in rural Devon, England, as he ever was on stage at a sold-out stadium.

Watts did on occasion have an impact beyond drumming. He worked with Jagger on the ever more spectacular stage designs for the group's tours. He also provided illustrations for the back cover of the acclaimed 1967 album Between the Buttons and inadvertently gave the record its title. When he asked Stones manager Andrew Oldham what the album would be called, Oldham responded "Between the buttons," meaning undecided. Watts thought that Between the Buttons was the actual name and included it in his artwork. 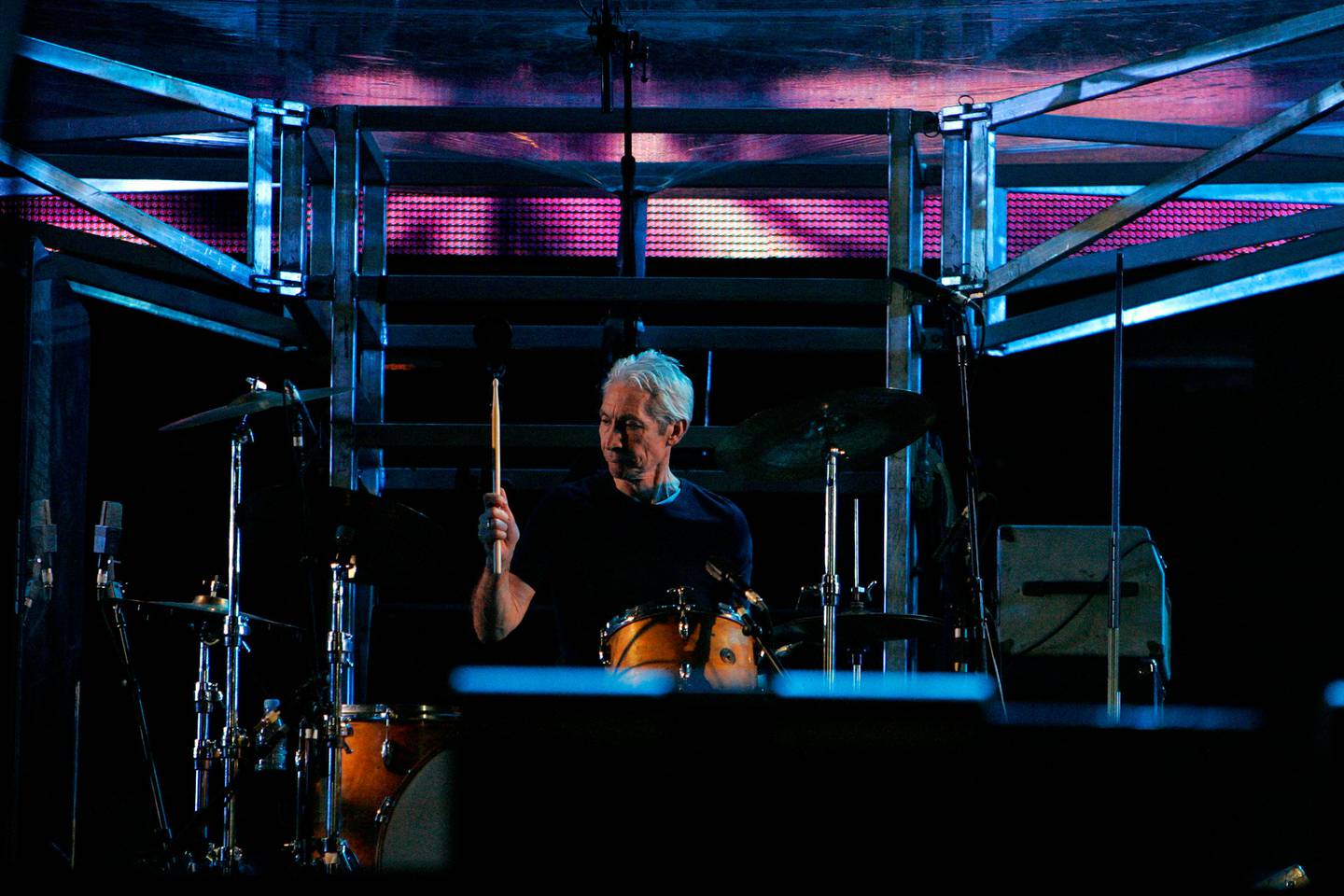 To the world, he was a rock star. But Watts often said that the actual experience was draining and unpleasant, and even frightening. "Girls chasing you down the street, screaming...horrible!... I hated it," he told The Guardian newspaper in an interview. In another interview, he described the drumming life as a "cross between being an athlete and a total nervous wreck."

Author Philip Norman, who has written extensively about the Rolling Stones, said Watts lived "in constant hope of being allowed to catch the next plane home." On tour, he made a point of drawing each hotel room he stayed in, a way of marking time until he could return to his family. He said little about playing the same songs for more than 40 years as the Stones recycled their classics. But he did branch out far beyond "Satisfaction" and Jumpin' Jack Flash by assembling and performing with jazz bands in the second half of his career. 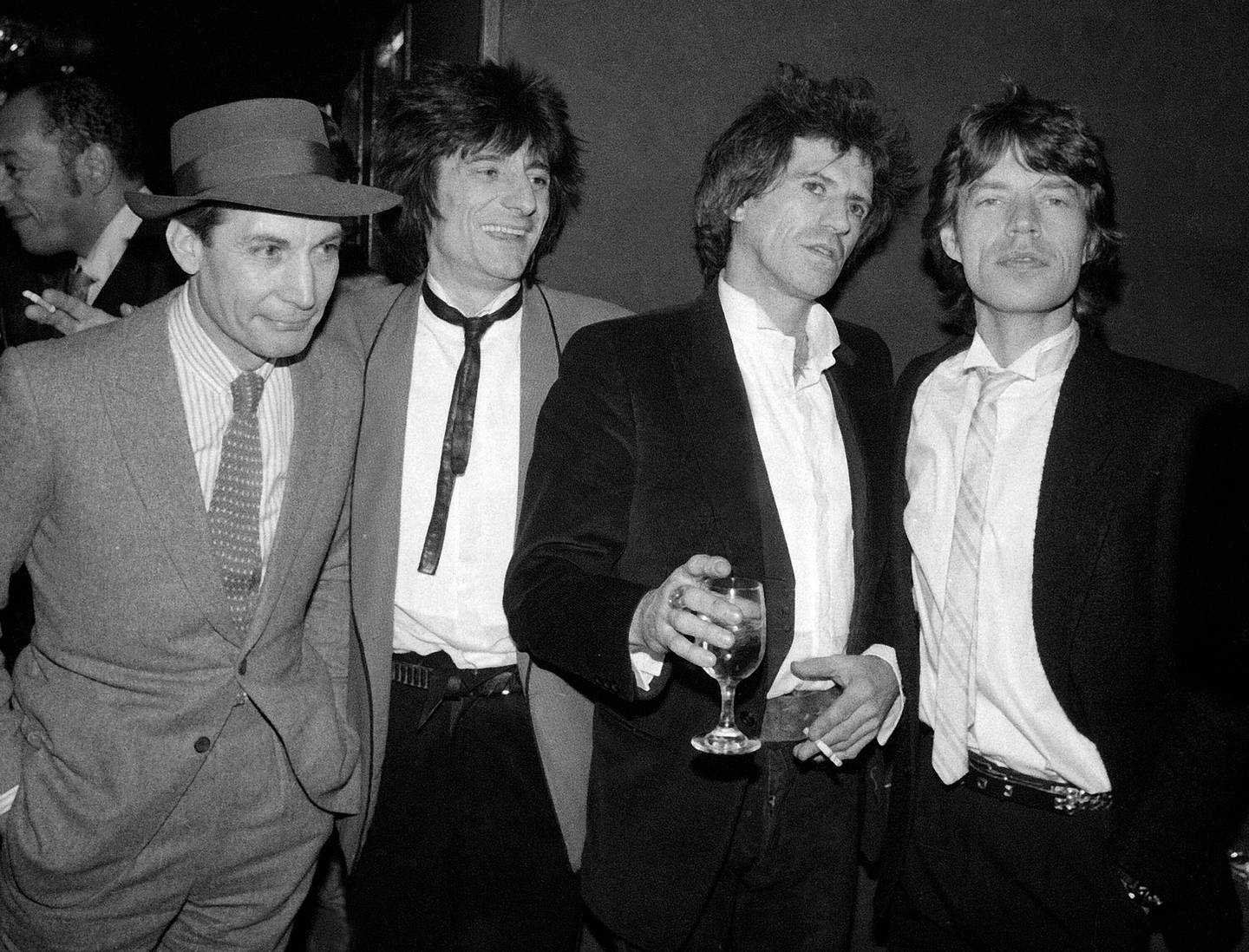 Charlie Watts, Ron Wood, Keith Richards, and Mick Jagger appear at a party celebrating the opening of their film Let's Spend The Night Together in New York on January 18, 1983. Photo / AP

Charles Robert Watts, son of a lorry driver and a housewife, was born in Neasden, London, on June 2, 1941. From childhood, he was passionate about music — jazz in particular. He fell in love with the drums after hearing Chico Hamilton and taught himself to play by listening to records by Johnny Dodds, Charlie Parker, Duke Ellington and other jazz giants.

He worked for a London advertising firm after he attended Harrow Art College and played drums in his spare time. London was home to a blues and jazz revival in the early 1960s, with Jagger, Richards and Eric Clapton among the future superstars getting their start. Watts' career took off after he played with Alexis Korner's Blues Incorporated, for whom Jagger also performed, and was encouraged by Korner to join the Stones.

Watts wasn't a rock music fan at first and remembered being guided by Richards and Brian Jones as he absorbed blues and rock records, notably the music of bluesman Jimmy Reed. He said the band could trace its roots to a brief period when he had lost his job and shared an apartment with Jagger and Richards because he could live there rent-free.

"Keith Richards taught me rock and roll," Watts said. "We'd have nothing to do all day and we'd play these records over and over again. I learned to love Muddy Waters. Keith turned me on to how good Elvis Presley was, and I'd always hated Elvis up 'til then."

Watts was the final man to join the Stones; the band had searched for months to find a permanent drummer and feared Watts was too accomplished for them. Richards would recall the band wanting him so badly to join that members cut down on expenses so they could afford to pay Watts a proper salary. Watts said he believed at first the band would be lucky to last a year.

"Every band I'd ever been in had lasted a week," he said. "I always thought the Stones would last a week, then a fortnight, and then suddenly, it's 30 years."