Through tears and anger, R Kelly's accusers have told a court he had preyed on them and misled his fans

The disgraced R&B star has been sentenced to 30 years in federal prison for sex trafficking.

"You made me do things that broke my spirit. I literally wished I would die because of how low you made me feel," one woman told the Grammy-winning, multiplatinum-selling singer. She said she was forever traumatised by her teenage experience with him.

"Do you remember that?" she asked.

A Brooklyn federal court jury last September found Kelly, 55, guilty of racketeering and other counts at a trial that was seen as a signature moment in the #MeToo movement.

Outrage over Kelly's sexual misconduct with young women and children was fuelled in part by the widely watched docuseries Surviving R Kelly, which gave voice to accusers who wondered whether their stories were previously ignored because they were black women. 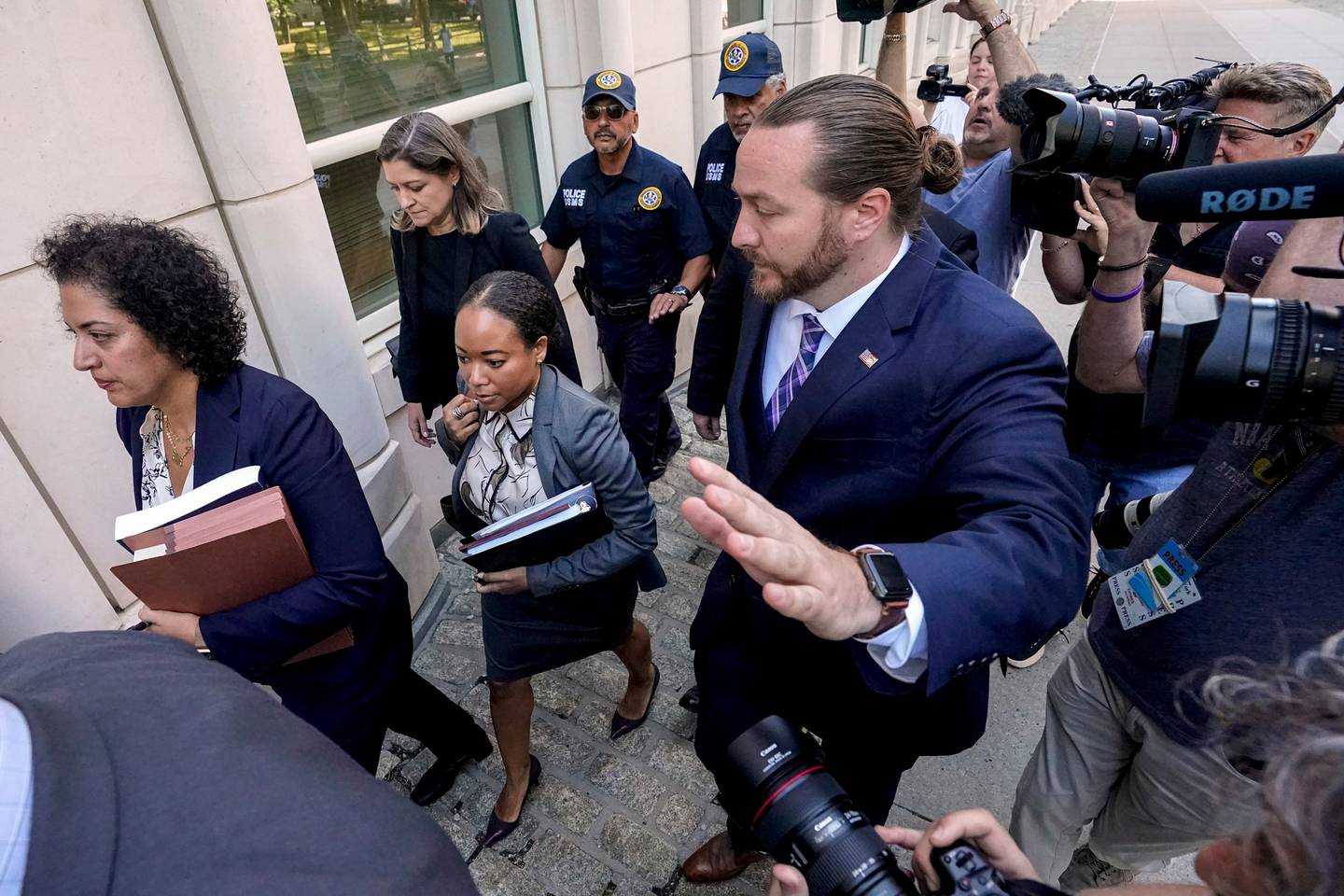 The prosecution team in the trial against R. Kelly is escorted by federal agents as they arrive at court. Photo / John Minchillo, AP

Kelly manipulated millions of fans into believing he was someone other than the man the jury saw, another accuser told the court.

Victims "have sought to be heard and acknowledged", she said. "We are no longer the preyed-on individuals we once were."

A third woman, sobbing and sniffling as she spoke, said Kelly's conviction renewed her confidence in the legal system.

"I once lost hope," she said, addressing the court and prosecutors, "but you restored my faith."

The woman said Kelly victimised her after she went to a concert when she was 17.

"I was afraid, naive and didn't know to handle the situation," she said, so she didn't speak up at the time.

Kelly kept his hands folded and eyes downcast as he listened. It wasn't yet clear whether he would speak at the sentencing.

"He's strong, and we are going to get through this," defence lawyer Jennifer Bonjean said on her way into court. Whatever his sentence, Kelly is hopeful his conviction will be overturned on appeal, she said. US District Judge Ann Donnelly determined that federal guidelines allowed for a sentence of up to life in prison. In sentencing Kelly to 30 years in jail, the judge said "the public has to be protected".

They argued in court papers he should get a break in part because he "experienced a traumatic childhood involving severe, prolonged childhood sexual abuse, poverty, and violence".

As an adult with "literacy deficiencies", the star was "repeatedly defrauded and financially abused, often by the people he paid to protect him", his lawyers said.

The hitmaker is known for work including the 1996 hit I Believe I Can Fly and the cult classic Trapped in the Closet, a multi-part tale of sexual betrayal and intrigue.

Allegations that Kelly abused young girls began circulating publicly in the 1990s. He was sued in 1997 by a woman who alleged sexual battery and sexual harassment while she was a minor, and he later faced criminal child pornography charges related to a different girl in Chicago. A jury there acquitted him in 2008, and he settled the lawsuit.

All the while, Kelly continued to sell millions of albums.

The Brooklyn federal court jury convicted him after hearing that he used his entourage of managers and aides to meet girls and keep them obedient, an operation that prosecutors said amounted to a criminal enterprise.

Kelly, born Robert Sylvester Kelly, used his "fame, money and popularity" to systematically "prey upon children and young women for his own sexual gratification", prosecutors wrote in a court filing earlier this month.

Several accusers testified that Kelly subjected them to perverse and sadistic whims when they were underage.

The accusers alleged they were ordered to sign nondisclosure forms and were subjected to threats and punishments such as violent spankings if they broke what one referred to as "Rob's rules".

Some said they believed the videotapes he shot of them having sex would be used against them if they exposed what was happening.

According to testimony, Kelly gave several accusers herpes without disclosing he had an STD, coerced a teenage boy to join him for sex with a naked girl who emerged from underneath a boxing ring in his garage, and shot a shaming video that showed one victim smearing faeces on her face as punishment for breaking his rules.

Kelly has denied any wrongdoing. He didn't testify at his trial, but his then-lawyers portrayed his accusers as girlfriends and groupies who weren't forced to do anything against their will and stayed with him because they enjoyed the perks of his lifestyle.

Evidence also was presented about a fraudulent marriage scheme hatched to protect Kelly after he feared he had impregnated R&B singer Aaliyah in 1994 when she was just 15. Witnesses said they were married in matching jogging suits using a licence falsely listing her age as 18; he was 27 at the time.

Aaliyah worked with Kelly, who wrote and produced her 1994 debut album Age Ain't Nothing But a Number. She died in a plane crash in 2001 at age 22.

An earlier defence memo suggested prosecutors' arguments for a higher sentence overreached by falsely claiming Kelly participated in the paying of a bribe to a government official in order to facilitate the illegal marriage.

The Associated Press does not name people who say they have been sexually assaulted or abused unless they come forward publicly. The women who spoke at Kelly's sentencing were identified only by first names or pseudonyms.

Kelly has been jailed without bail since 2019. He's still facing child pornography and obstruction of justice charges in Chicago, where a trial is scheduled to begin on August 15.