Will Smith has won Best Actor following a shock outburst where he "smacked the s*** out of" Chris Rock onstage over a comment made about Smith's wife.

In what became the most anticipated acceptance speech of the show, he tells the audience the character of Richard was a fierce defender of his family. He says he is being called on in his life to protect people and that he "wants to be a vessel for love."

"You have to smile and pretend like that's okay."

Moments earlier, the Oscars audience was left reeling when Smith leapt on stage to take a swing at presenter Chris Rock and yell at him after a joke was made about Smith's wife, Jada Pinkett Smith.

Rock had taken to the presenter's stage poking fun at other husband-and-wife stars before turning to Pinkett Smith to say, "Jada, I love you. GI Jane two, I can't wait to see it,"

Pinkett Smith, who is bald, revealed in 2018 she was diagnosed with alopecia. She can be seen rolling her eyes and looking at her husband following Rock's comments.

While Rock grinned and told the audience, "that was a nice one", all of a sudden Smith is out of his seat and storming towards Rock before taking a swing at the comedian. 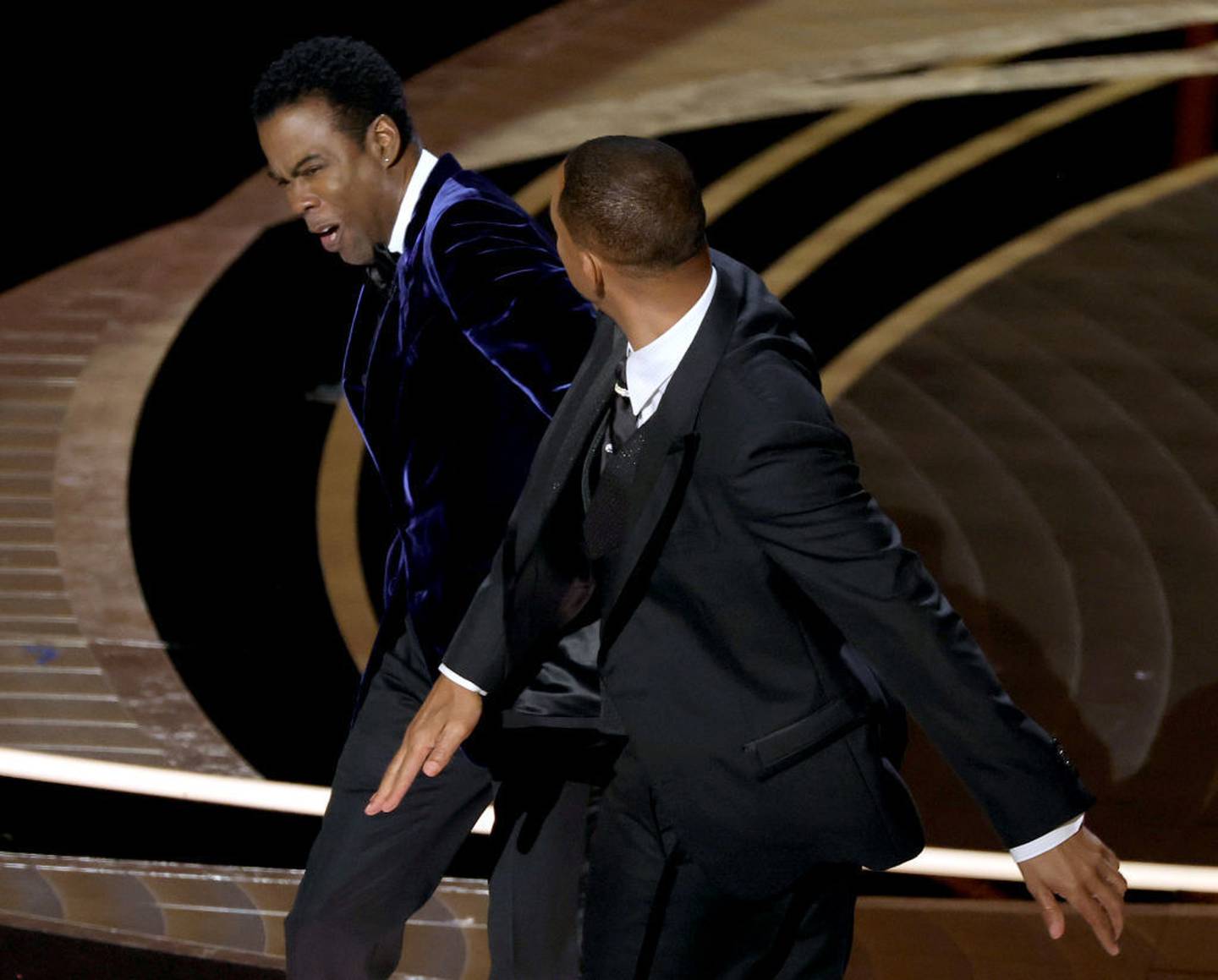 Chris Rock appears to be struck by Will Smith on stage. Photo / Getty Images

A shocked Rock responded: "Wow. Will Smith just smacked the s*** out of me."

"This is one of the most awkward moments in television."

Smith then returned to his seat where he yelled: "Keep my wife's name out of your f***ing mouth."

It's believed the outburst was also sparked by a joke Rock made at the 2016 Oscars where he quipped:

"Jada boycotting the Oscars is like me boycotting Rihanna's panties. I wasn't invited! Oh, that's not an invitation I would turn down!" Smith on the red carpet with wife Jada Pinkett-Smith who revealed in 2018 she had been diagnosed with hair-loss condition alopecia. Photo / Getty Images

It has been reported that during an ad break fellow actor Denzel Washington pulled Smith aside to speak to him and was then seen kneeling by Pinkett Smith with his arm around her.

As Smith accepted his award, he revealed Washington had just told him: "At your highest moment, be careful, that's when the devil comes for you."

Smith apologised to the Academy and his fellow nominees before becoming emotional:

"I'm not crying for winning an award. It's about being able to shine a light on the people ... the entire Williams family. I look like the crazy father, just like they said."

The internet was quick to respond to the Fresh Prince star's attack, erupting with questions about whether the incident was scripted or an unexpected outburst by Smith.

Waiittt was that scripted?? Did Will just tell Chris Rock off for calling up Jada’s name?? #Oscars pic.twitter.com/ELLrjm1616

MAYHEM BETWEEN CHRIS ROCK AND WILL SMITH AT THE #Oscars pic.twitter.com/265hGbsEDg

Will Smith getting his first Oscar after smacking Chris Rock is pretty insane pic.twitter.com/2KpKE6ZCFL