Behind-the-scenes footage has surfaced from the moments following Will Smith spectacularly slapping Chris Rock across the face on stage at the Oscars.

The A-lister was shown being comforted by fellow Hollywood icons Tyler Perry and Denzel Washington after the confrontation, provoked by Rock mocking Jada Pinkett Smith's hair.

The trio were shown chatting next to the stage, with Perry and Washington placing a hand on Smith's back and Smith at one point nodding in agreement.

Perry split from the group first and joined another duo, while Washington walked with an arm around Smith before taking his seat.

Following the moment in which Will Smith seemingly slapped Chris Rock at the #Oscars, Smith is comforted by Tyler Perry and Denzel Washington. He appears to wipe away tears before rejoining his wife pic.twitter.com/TyXPQe1WGY

Actor Bradley Cooper was then shown embracing Smith, before appearing to deliver some words of encouragement while tapping him lightly on the chest.

The pair then shared a tight hug, tapping each other on the back several times, and pulled away briefly for a short discussion, before hugging again. 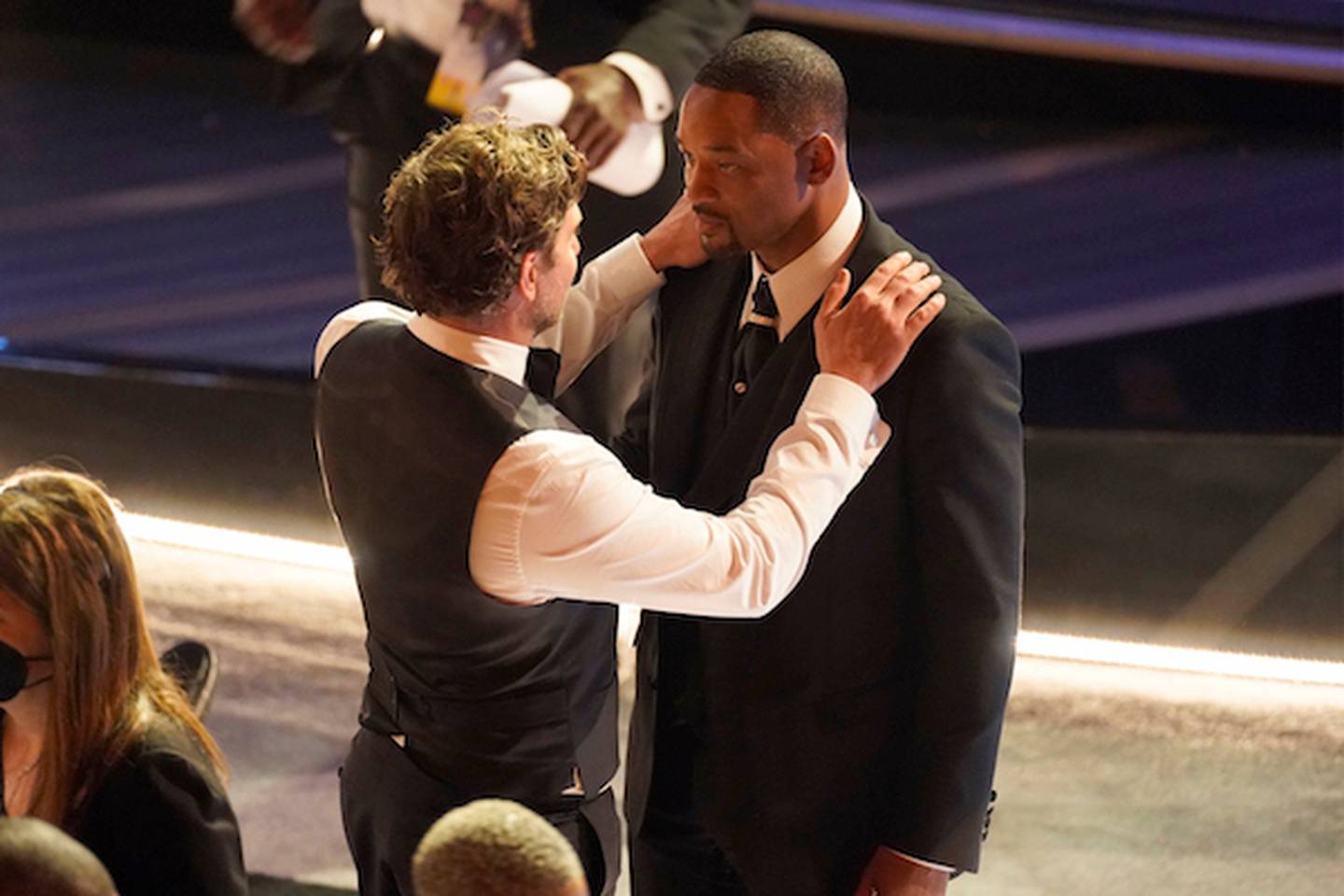 Cooper appeared to comfort Smith after the incident. Photo / AP 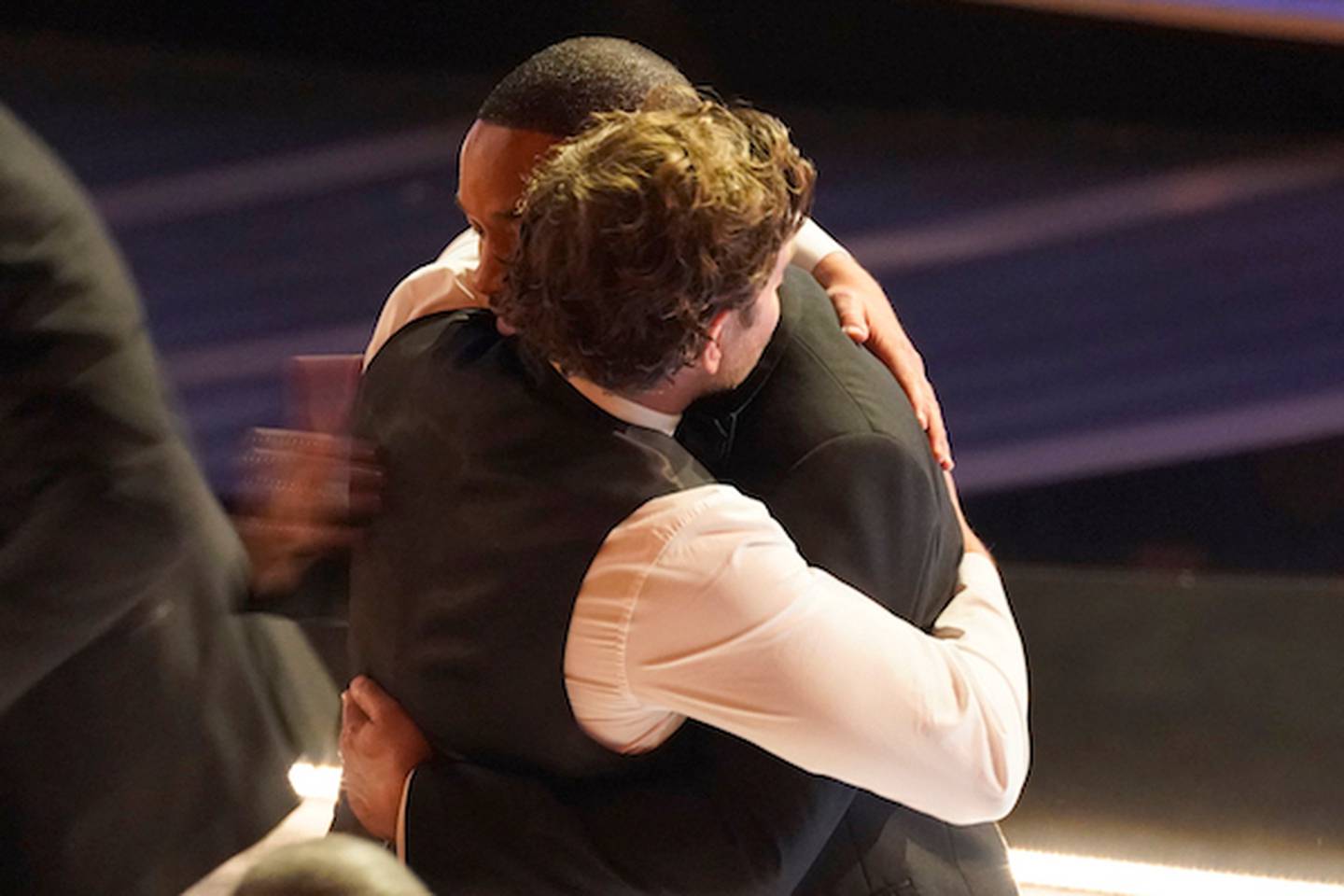 Bradley Cooper and Will Smith hugging at the Oscars. Photo / AP

After splitting, Smith pulled a white cloth from his pocket and used it to dab both of his eyes.

As he took his seat, a woman understood to be his publicist crouched next to his chair, but was swiftly cut off by the announcer's request for the front area be cleared. 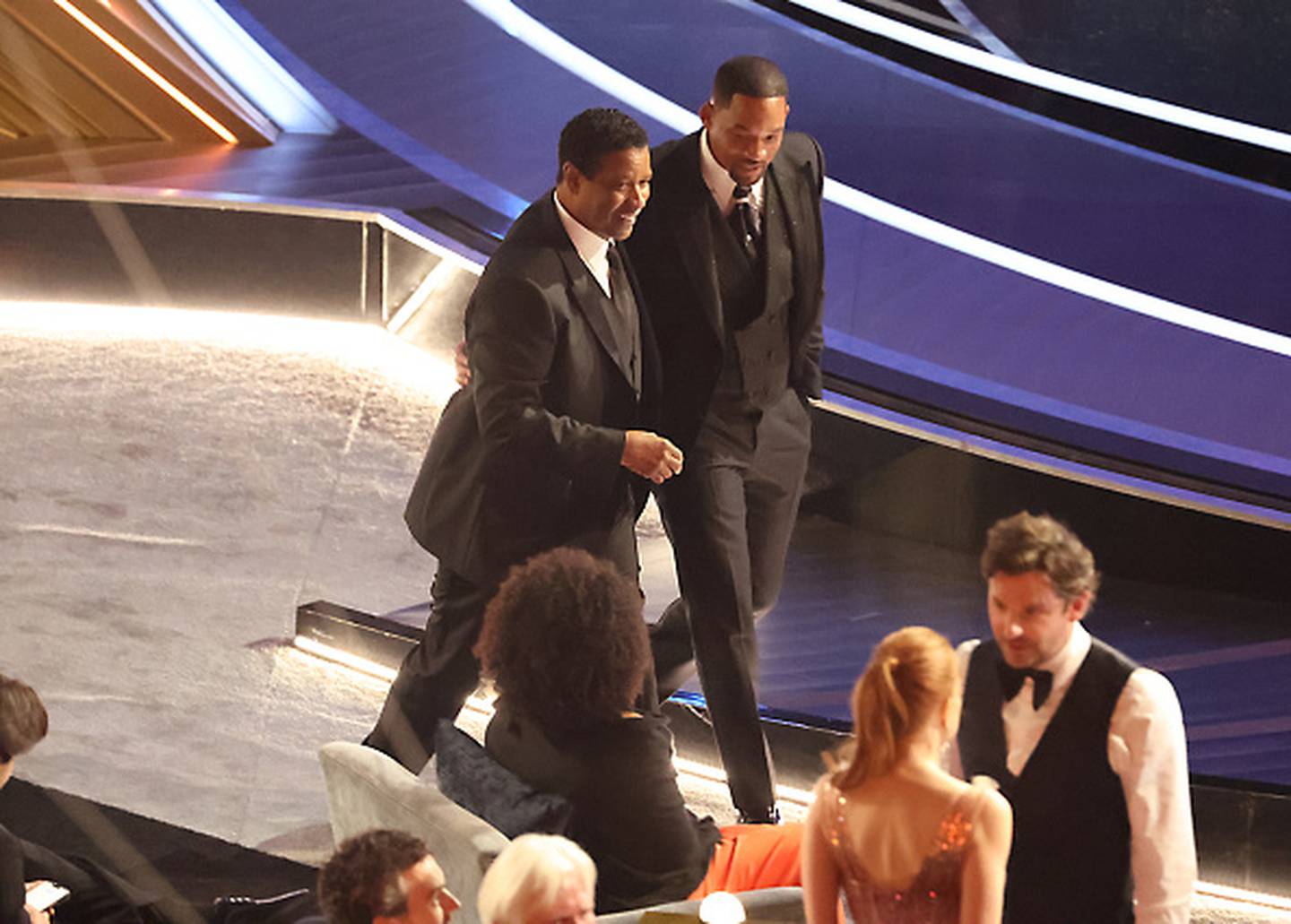 Denzel Washington comforts Will Smith during the show at the 94th Academy Awards at the Dolby Theatre at Ovation Hollywood on Sunday, March 27, 2022. Photo / Getty Images

Smith later paid tribute to Washington in his acceptance speech after being awarded the Oscar for best actor for his leading role in King Richard.

Smith's voice shook as he fought back tears during the speech, in which he apologised to the Academy, and emphasised the importance of his family.

"Richard Williams was a fierce defender of his family," Smith began, speaking of Venus and Serena Williams' father he plays in the biopic.

"In this time in my life, in this moment, I am overwhelmed by what god is calling on me to do and be in this world." Denzel Washington, and Tyler Perry comfort Will Smith during the show at the Oscars. Photo / Getty Images

He took several long pauses as the crowd waited patiently to hear what he had to say.

"I'm being called on in my life, to love people and to protect people. I know to do what we do, you've got to be able to take abuse and have people talk crazy about you. You've got to have people disrespect you and smile and pretend it's okay," he said.

"Denzel said to me a minute ago, he said 'At your highest moment, be careful, that's when the devil comes for you'.

"Art imitates life, I look like the crazy father just like they said about Richard Williams. But love will make you do crazy things."

Earlier, Smith stormed the stage after Rock's derogatory joke about his wife's hair.

"Jada, I love ya. GI Joe 2, can't wait to see it," Rock said, in reference to Pinkett Smith's shaved head.

The camera panned to the Red Table Talk host rolling her eyes and glancing sideways at Smith, who then suddenly jumped to his feet, marched up to Rock and slapped him.

He then returned to his seat and yelled, "KEEP MY WIFE'S NAME OUT YOUR F**KING MOUTH" repeatedly as the crowd sat stunned.

"Wow," Rock said afterwards. "Will Smith just smacked the sh** out of me."