The New Zealand Symphony Orchestra (NZSO) is partnering with a 50-strong Pasifika choir to record songs from several island nations, bringing their melodies to the world.

The project is called Mana Moana and is a new partnership for the NZSO in its quest to be an "orchestra for all New Zealanders".

Ten songs have been chosen by communities living in Wellington who are from Tonga, Samoa, Tokelau, Fiji, Niue and Cook Islands.

She said while the orchestra had partnered with performers from the Pacific before, this time was different because the music was from the islands and chosen by people from those communities.

"We're the platform for telling these beautiful Pasifika stories in their languages and their melodies."

It's hoped the recordings will help ensure cultural identity and language are preserved, celebrated, and passed on through these stories in song.

The songs will be recorded by RNZ and hosted on digital platforms as well as performed at a free concert in December at the Michael Fowler Centre. The concert is for the Pasifika community first and foremost. The NZSO and Signature Choir rehearsed together for the first time at the Michael Fowler Centre in Wellington this month. Photo / Latitude Creative

Mason said cost could be a big barrier to attending concerts.

"We really wanted to make it as accessible as possible for the people to whom these songs belong."

Wellington's Signature Choir has worked with orchestrator Thomas Goss to ensure the essence of the songs is maintained and capture the emotion of the originals.

Choir director Helen Tupai said she already knew of people who had booked flights for the concert even though they didn't have tickets yet.

"I can guarantee you almost 98 per cent of our community have never heard the New Zealand Symphony Orchestra.

"They're going to hear their stories and their songs interpreted in another way and that's what music does. It's such a universal language... if it tugs at your heart and it makes you want to dance, you've done the job."

Tupai said having the songs recorded meant people could "tap into" music from the Pacific across the world. 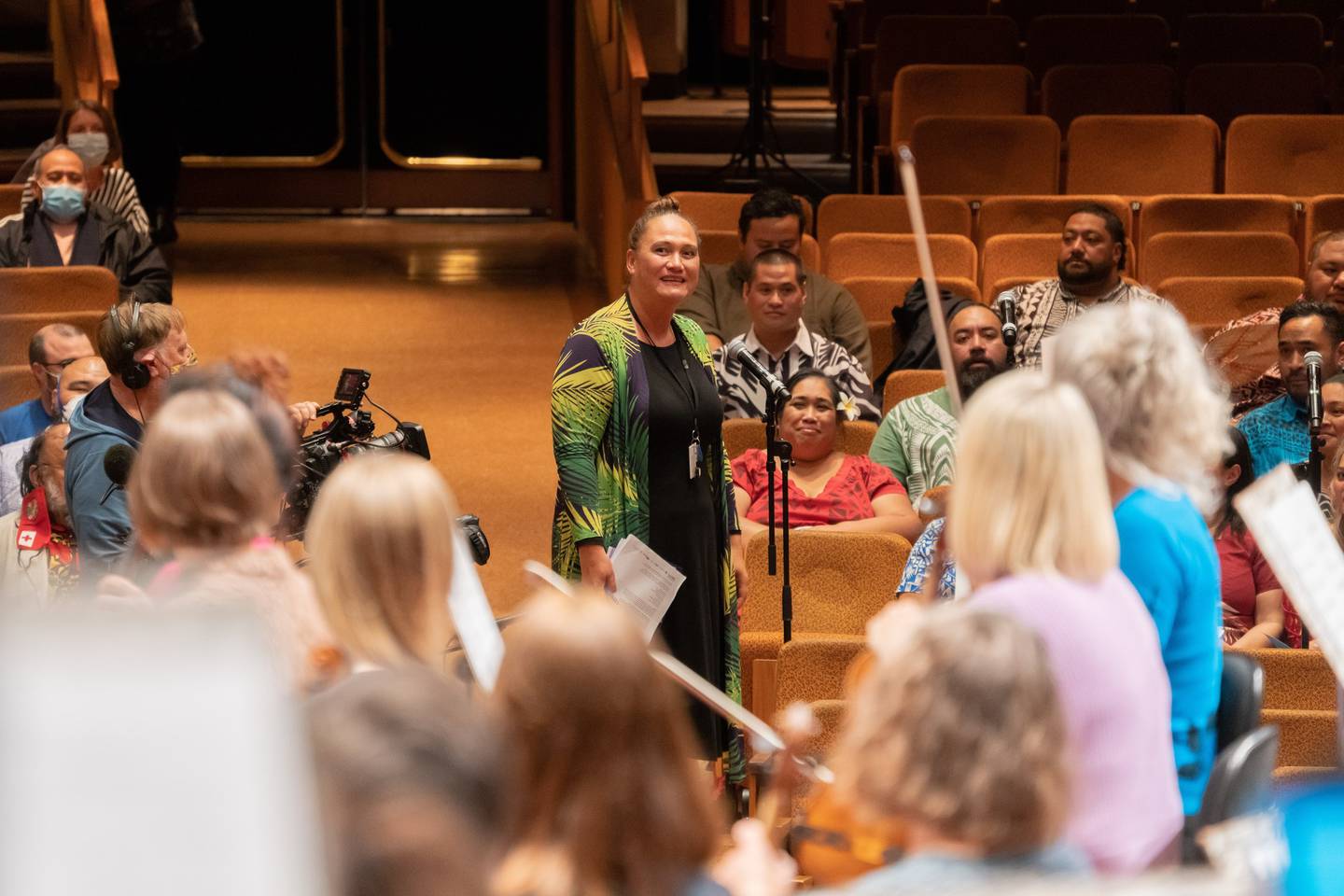 During a rehearsal earlier this month, Tupai said the choir felt like they were listening to their songs being played in a movie theatre.

"That was because the orchestra just heightened our music and gave it a different colour pallet. It was beautiful and very emotional – people cried."

Part of Signature Choir's mission is to share Pacific music not only with its own communities, but also in places where Pacific voices are seldom heard.

Minister for Arts, Culture and Heritage Carmel Sepuloni said she loved the journey she has been on with the NZSO over the past five years, despite the challenges of Covid-19.

She said it was an honour to attend the rehearsal for the Mana Moana collaboration.

"The beautiful Wellington Pasifika signature choir alongside the NZSO was quite emotional for those of us that got a sneak preview.

"We shouldn't underestimate the role that arts can play in uniting communities and creating shared understanding and respect for each other."