Johnny Depp's defamation trial against his ex-wife Amber Heard continues this week with more testimonies resulting in bitter details being shared with the court.

Jack Whigham, Depp's talent manager, was called to the stand this week where he was asked about the star's earning capacity before and after Heard's 2018 Washington Post domestic violence op-ed which Depp has claimed "defamed" him.

"After the op-ed it was impossible to get him a studio film which is what we normally would have been focused on," the talent agent revealed.

"I was not successful in rescuing 'Pirates' for Johnny," he said referring to his failure of convincing Pirates of the Caribbean producers to continue to employ Depp.

Whigham then revealed the star's earnings from past films. He stated the actor was paid NZD$15.4million for Murder on the Orient Express, NZD$12.3m for City of Lies and had he resumed his role as Jack Sparrow in the Pirates of the Caribbean franchise he would have earnt NZD$34.8m.

He stated actor had to take a pay cut after the op-ed as he "struggled" to secure any work which resulted in Depp signing on for the independent film, Minimata for pay of NZD$4.6m.

Heard's attorneys then pointed out the star did not have the cleanest track record and insinuated the Pirates of the Caribbean deal could have gone south before Heard's op-ed was published.

They then listed at least five instances where Depp had lashed out including giving a drunk speech at a 2014 film award ceremony, showing up drunk to a movie premiere in 2017 and being accused of attacking a crew member on a movie set following a day of drinking.

Erin Falatai, Heard's nurse was also called to the stand on Monday where she revealed text messages and photos of Heard with a red and bruised face. Falatai also spoke about the time Heard's sister told her the actress was suicidal.

New York Post has reported when Falatai was asked what she made of the photos the nurse replied, "I'm not an expert . . . I mean there's colour on her face in different areas, I don't know what's what." 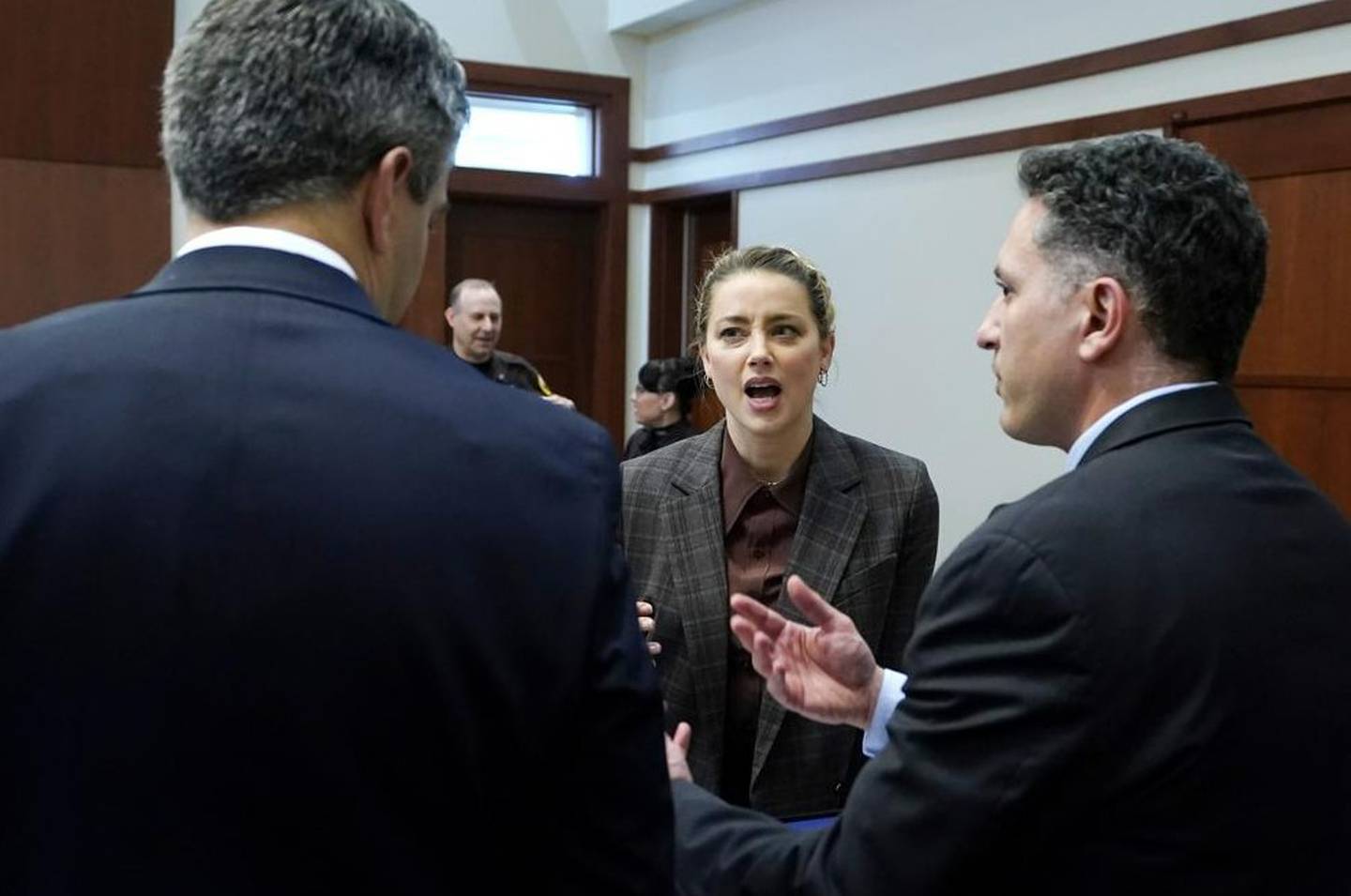 Amber Heard seen talking with her attorneys at the trial. Photo / AP

The pre-recorded deposition also included a note detailing a time when Falatai witnessed Heard with a bleeding lip. The actress said it was a result of a fight with Depp.

Falatai was then asked if Heard had ever told her she was fearful of Depp, the nurse said she could not remember.

Earlier in the day another witness, Travis McGivern, who has worked in Depp's security team for nine years took to the stand. Testifying via video link, the veteran security team member said Heard punched the Pirates of the Caribbean actor on the left side of his face on March 23, 2015 at one of the star's Los Angeles penthouses.

"The initial look on his face kind of mirrored mine, kind of a look of shock," McGivern said as he recalled Depp's reaction.

He added, "My job is to ensure the safety and wellbeing of my clients, and I felt like I hadn't done that."

McGivern said he saw a "nice little shiner" on the actor's face after the punch and noted the actor never retaliated.

McGivern also recalled the time he saw Heard spit on her ex-husband and throw a Red Bull can at him.

"You name it, she's spewed it," McGivern told the court before claiming Heard had mocked and "demeaned" his career choice, she "threw some shade on me and my chosen career."

When asked about Depp's drug use McGivern said while the actor smoked weed "too many times to count" and took cocaine "a couple of times", the star was "chill" and "mellow" when he was high.

Heard, 36, is currently being sued by Depp, 58, for US$50 million, with Depp claiming that his ex-wife defamed him in her 2018 Washington Post op-ed where she spoke at length about being the victim of brutal domestic violence.

Depp was not named in Heard's essay, but the ongoing trial hinges on his claims that the article clearly referenced him and was directly responsible for millions of dollars lost due to damage to his career and reputation.