Jurors deciding the outcome of the epic trial between Johnny Depp and Amber Heard returned to their deliberations on Tuesday following Monday's Memorial Day public holiday in the US.

But there was a hiccup in proceedings as jurors returned to court to say they didn't understand some of the instructions that had been given to them by Judge Penney Azcarate.

One of 42 separate questions they had been instructed to consider to help them come to a verdict had flummoxed them.

Heard is being sued by Depp for US$50million ($76m) for implying he abused her in a 2018 Washington Post op-ed. He claims her allegations are false and cost him lucrative movie roles.

Heard has countersued, asking for US$100 million ($153m) and claiming she suffered "rampant physical violence and abuse" at his hands but was defamed when claims were made that she had manufactured the allegations.

Contained within a "special verdict form" handed to the jury are 42 questions. Of those, 24 relate to Depp's case against Heard with the remaining 18 about Heard's case against Depp.

If the jurors believe Depp is more credible and answer Yes to questions about whether he has been defamed, then Heard could be sunk. Equally Heard could prevail if she gets the jury's Yes answers. Judge Penney Azcarate speaks in the courtroom as jury deliberations continue in the Fairfax County Circuit Courthouse on May 31. Photo / AP

On Tuesday, US time, the jurors came back to the courtroom to ask Judge Azcarate for clarity on one of those more than 40 questions.

The question was whether they found the headline of the op-ed penned by Heard – which read, "I spoke up against sexual violence – and faced our culture's wrath" – to defame Depp.

Some jurors were confused and asked if they were being told to consider whether merely the headline was defamatory, or the entire article.

Judge Azcarate told the Fairfax, Virginia, court just before 2pm local time that for that question the jurors were to consider the headline – and not the op-ed as a whole.

"The statement is the headline and not the entire op-ed," the judge said. But other questions do dig deeper into some of the other details in Heard's opinion piece.

Closing arguments from both sides concluded on Friday at the Fairfax County court house in Virginia with the jury retiring at around 2pm to begin discussing the case.

A verdict is expected this week. But the court document, seen by the Daily Mail, reveals they will have a huge amount of detail to consider.

The 10 pages of the special verdict form cover a range of questions chiefly on the detail of the defamation allegations but also on the amount of compensation that should be paid out to the winning party.

The first pages relate to Depp's accusations against Heard. The initial question focuses on the op-ed's headline: "I spoke up against sexual violence – and faced our culture's wrath. That has to change."

It asks the jurors if Depp has proven all the elements of his defamation allegations. 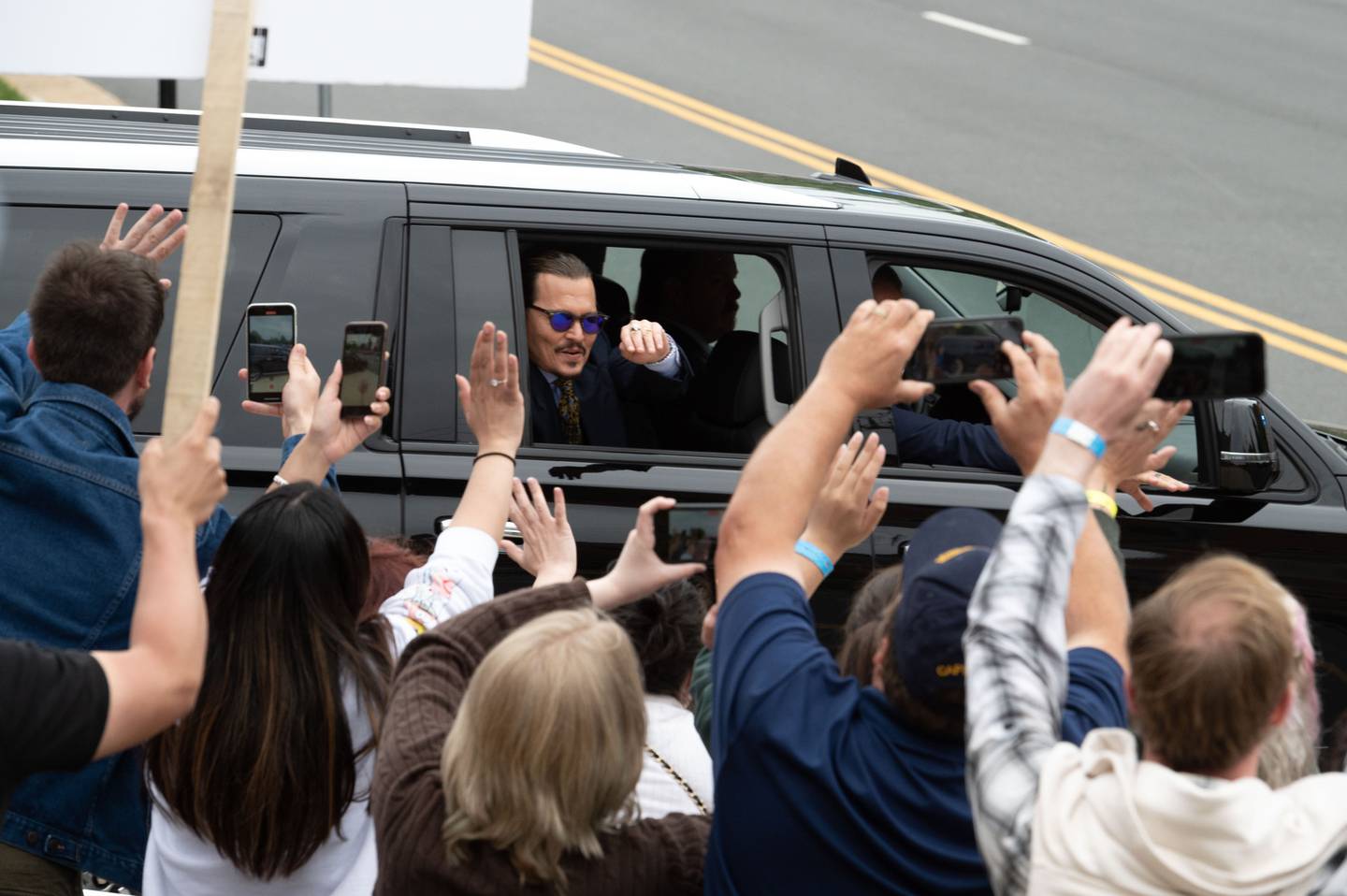 Johnny Depp waves to his fans out the window of his vehicle as he departs outside court during the Johnny Depp and Amber Heard civil trial. Photo / Getty

If the juror believes that statement to be defamatory, seven more questions dig into the detail of that view.

So, for instance, the form asks the juror if they believe the defamation was deliberate on Heard's part.

It also asks if Depp has proved "actual malice". This is an American legal term which says a statement was made with deliberate and reckless disregard for the truth.

A subsequent set of questions ask jurors to ponder another line from Heard's Washington Post article – perhaps the most key line in the whole op-ed.

"Then two years ago, I became a public figure representing domestic abuse, and I felt the full force of our culture's wrath for women who speak out."

Depp's legal team has argued that although the Pirates of the Caribbean star was not named in that line – indeed in the article at all – the inference was that Heard was referring to him.

Again jurors are asked if it can be proved that the line is defamatory and, if so, why.

There are further questions on other extracts from Heard's article. Finally, if the jurors do believe Heard defamed Depp they are then asked the amount of punitive and compensatory damages should be awarded to the star.

If the jurors do not believe Depp has been defamed, Heard wins and no damages are payable. 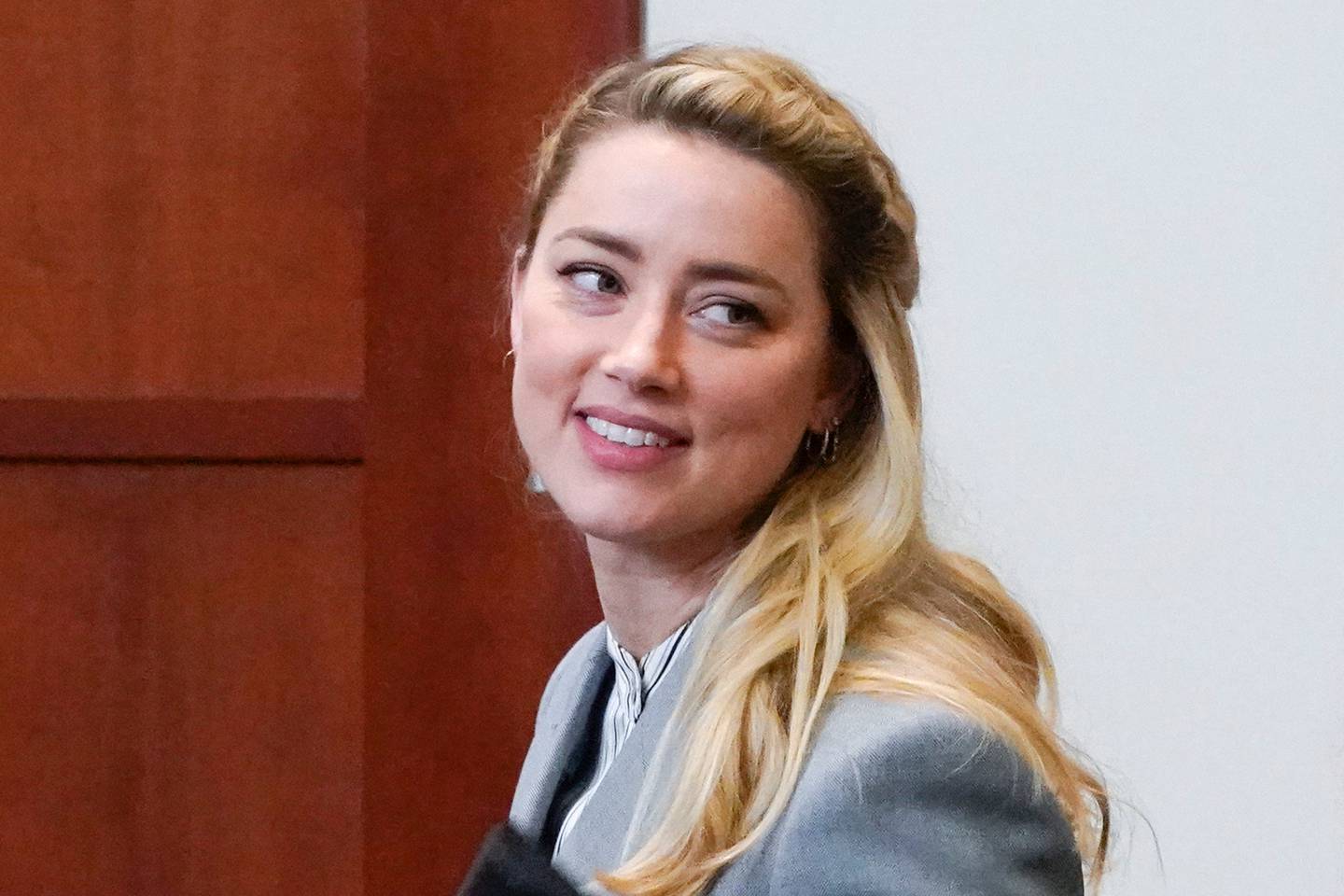 Actor Amber Heard leaves during a break in the courtroom at the Fairfax County Circuit Courthouse on May 27. The jury is now deliberating in the case. Photo / AP

The second part of the form focuses on Heard's counterclaim against Depp.

That rests on a Daily Mail article from April 2020 where Depp's then lawyer Adam Waldman was quoted as saying Heard made "fake" sexual violence allegations against Depp, which contained "hoax" facts.

Heard's legal team has said that although Depp did not make those comments directly, Waldman was effectively acting on the star's instructions. Depp denies that.

Jurors are asked if Heard has proven all the elements of her defamation case against Depp. If the juror says yes, they then need to delve into more detail with questions including if Waldman was an "agent" for Depp.

The juror is also asked to deliberate on whether the comments were made with "actual malice".

Just like for Depp's case, the juror is asked to consider how much compensation Heard should get if they find in her favour.

On Friday, Heard's lawyer Benjamin Rottenborn reminded the jury that the burden of proof was on Depp and that he needed to show that every single instance of abuse Heard has accused him of was false.

"If Amber was abused by Mr Depp even one time, then she wins," Rottenborn said.

"It's not about who's the better spouse," he added. "It's not about whether you think Ms Heard may have been abusive to Mr Depp.

"If you think they were abusive to each other … then Amber wins."

Camille Vasquez, for Depp, said Heard's claims were "false" and "defamatory", and that she conducted a "performance" in court to play "the role of her lifetime as a heroic survivor of brutal abuse".

"She told you what she thinks you need to hear to convict this man as a domestic abuser and a rapist," Vasquez said.

Depp's team said the evidence presented by Heard's team of abuse was inconsequential or maybe manipulated. And the star's lawyers asked why no medical records existed if there was incident after incident of abuse.

Vasquez also said that "no woman" before Heard had ever alleged Depp was violent.

One of Depp's other lawyers went for the jugular.

"You have now come to know the real Amber Heard: it's scary," Benjamin Chew told the jury.